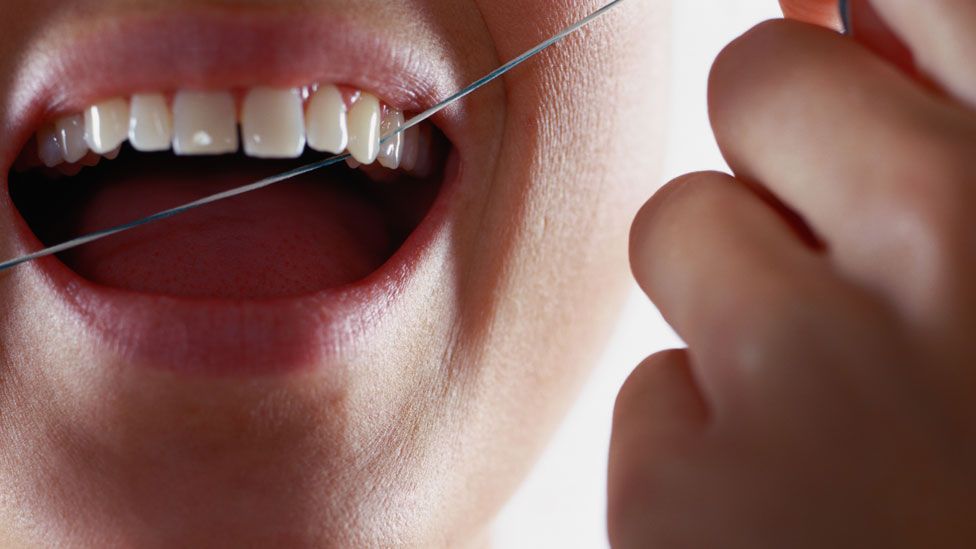 By Claudia Hammond 27th May 2014
Can flossing reduce the risk of tooth decay? When you take a close look at the evidence, it’s not quite as straightforward as you may think.

“How often do you floss your teeth?” It’s a question almost always asked by dentists when you are in the chair. We’re advised that we should floss our teeth as well as brushing twice a day. But are we really clear on the exact benefit this might bring?

The idea is that flossing lowers your risk of tooth decay and gum disease by preventing the build-up of plaque. Plaque is the sticky film of bacteria fuelled by the carbohydrates we eat. If left to breed, these bacteria eventually begin to break down the tooth’s surface, leading to painful cavities that need filling, or even to the removal of the tooth if the decay is too widespread. Plaque begins to reform the minute you remove it, and if not removed it can lead to gingivitis, where gums become inflamed and bleed easily. In a 26-year longitudinal study of men in Norway, teeth surrounded by inflamed gums were 46 times more likely to be lost by the end of the study than teeth surrounded by healthy gums.

We know a toothbrush cannot address the plaque problem completely, as it’s so hard to reach areas between the teeth. The idea of using flossing to reach the rest is credited to a dentist from New Orleans called Levi Spear Parmly, who recommended using silk for the purpose back in 1815. But it’s not only humans who do it. Long-tailed macaques at the Buddhist shrine of Prang Sam Yot in Thailand take strands of long human hair and wind them round their fingers to get to those hard to reach parts of their mouths.

There’s plenty of evidence to suggest that flossing reduces plaque levels, but what evidence is there that flossing can reduce the risk of both tooth decay and gingivitis? When you take a close look at the research, it’s not quite as straightforward as you may think.

A review of flossing in children found it could reduce decay, but in adults it’s not been as easy to demonstrate. A review published by the respected Cochrane Collaboration in 2012 gathered all the existing research on flossing and found just 12 trials, mostly conducted in the US, where adults were randomised either to brush their teeth as usual or to floss in addition.

They weren’t impressed with what they found. Combining the results of the studies and re-analysing them, they found a possible small reduction in plaque, but the studies’ evidence was graded as weak and very unreliable. “We are unable to claim or refute a benefit for flossing plus toothbrushing,” they said. A reduction in plaque would suggest a reduction in tooth decay in the long-term, but not a single long-term randomised controlled trial had been done (the longest was nine months). None had included an assessment of tooth decay because it would be too soon to see any difference.

Gap in the literature

The findings for gingivitis tell us more. Flossing does help reduce the risk, if only by 8%. This was at least some positive news for flossing fans, in contrast to an earlier review from 2008 which found it couldn’t demonstrate any benefits for regular flossing.

But the quality of the evidence makes it hard to come to any strong conclusions. Cochrane Reviews not only summarise all the data available, but they rate the research according to how well it was designed and conducted. They judged that many studies didn’t come up to scratch, ranking the quality as “low”.

As poor as the evidence might be deemed to be, it’s still all we have to go on at the moment. So you could argue that if it may be useful for us, what’s the harm in getting everyone to floss anyway? Self-inflicted damage could be the reason, and some studies have investigated this. One found that three of the 39 people taking part had damaged their gums one month into the study, but by two months, two of these people no longer had problems. Another found two people had damaged their gums by using a type of automatic flosser, but not in quite the right way.

If you want to know the right way to floss, here’s a guide. And in the absence of any forthcoming evidence that could strengthen the case either way, if you are going to floss at least make sure it doesn’t do you more harm than good.

Medical Myths
1Do glasses weaken your eyesight?
Medical Myths
2Are coffee and tea dehydrating?
BritLab
3Why our eyes close when we sneeze
Neurohacks
4The best way to win an argument
Around the BBC