Loading
HyperDrive | Transport
Will driverless trucks soon roll onto our roads?
Share using EmailShare on TwitterShare on FacebookShare on Linkedin
By Jack Stewart 10th June 2014
Forget driverless cars, the first robot vehicles to overtake you on the road could be trucks. Jack Stewart peeks into the cab of a self-driving behemoth that takes over tasks once restricted to human drivers.
T

The future of driving is automated, we’re being led to believe. Only last week, computing giant Google unveiled plans for a self-driving car it will build itself.

But long before we’re sitting in the passenger seat being ferried to our destination by a robot driver, a much bigger kind of vehicle is likely to be zooming past us, its speed and braking controlled not by a human but by a computer.

Long-distance lorries may be the ideal test-bed for autonomous driving technology, and it could bring improvements in safety and fuel consumption.

One company that’s already built robot trucks is Peloton Technology, based in Silicon Valley, California. There I looked around one of two enormous, maroon and gold truck cabs fitted with driverless tech. This iconic symbol of the great American open road, dripping with chrome and nostalgia, is not an everyday sight in Silicon Valley offices, but Peloton’s CEO Josh Switkes believes his company can marry the two. 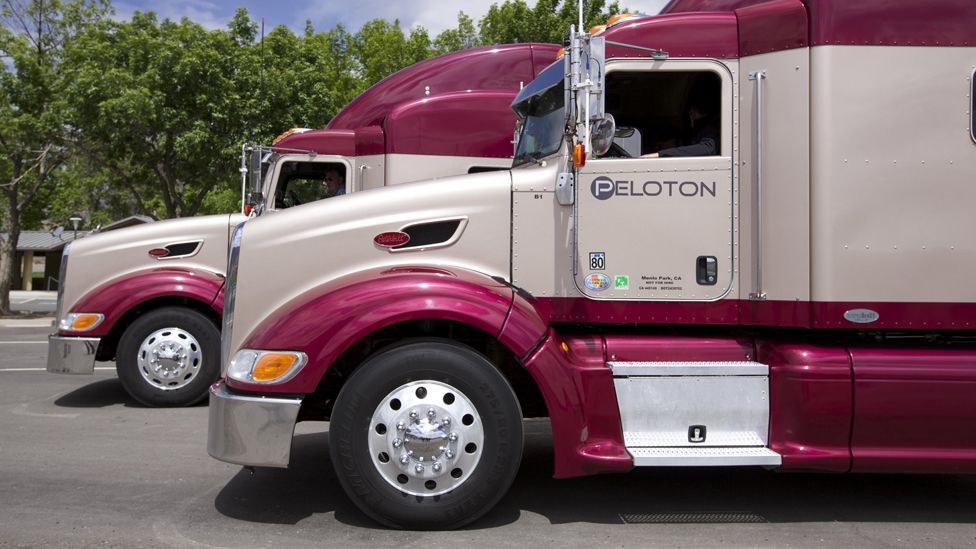 The trucks differ little physically from an ordinary big-rig, apart from extra aerials and a tablet computer (Peloton Technology)

“It’s a system that could immediately save lives, save fleets money, reduce energy use, and have these benefits immediately and on a large scale,” says Switkes.

Since trucking is such a huge industry, the impact of driverless tech could be significant, he suggests. In Europe, for example, there are around 6.5 million heavy goods vehicles in circulation. And in the US it is estimated that there are 15.5 million trucks in operation. As they say in the freight world: “If you bought it, a truck brought it,” meaning most of what we consume is conveyed by lorry at some point in its life cycle.

I climbed up the steps into the cab, and into the surprisingly springy driver’s seat. Behind the almost horizontal steering wheel was a vast array of switches and dials, displaying the state of various truck systems; standard fare for a big-rig. The only obvious sign that this truck packed more advanced features were half-metre-long antennaes on the large shiny wing mirrors, and a display on the windscreen. Mounted high, where a rear-view mirror would normally be, was a computer tablet.

The principle behind the technology Peloton is working on is simple enough to anyone with even a passing interest in competitive cycling. If you have ever watched a long race like the Tour de France, you will have seen the riders cluster in a group – the peloton. That cuts wind resistance for the riders in the pack, and they can make more progress with less energy. The same applies in the truck world. Platooning vehicles can save the trailing vehicles a lot of energy, and the front one benefits too because it decreases turbulence left in a large vehicle’s wake, which negatively impacts aerodynamics. Peloton (the company) is developing technology which would allow trucks to form two vehicles platoons, driving far more closely to each other than human drivers would be able to, to cut fuel use and emissions. 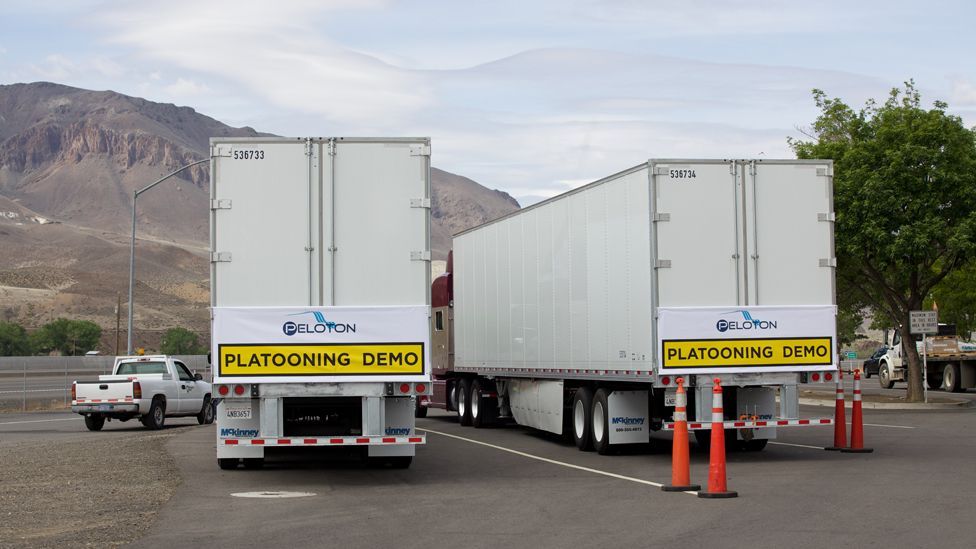 The company claims that real-world road tests show that platooning technology saves 10% fuel costs for the rear truck and 4.5% for the lead truck. Fuel costs in the US now account for 40% of operating costs for fleets, so the savings can be substantial.

There is no physical link between the trucks, and yet they travel between 23m and 6m (75ft and 20ft) apart. That compares to a recommended distance of several hundred feet for a human driver because of our slow reaction times.

In the rear vehicle, the tablet shows a driver’s-eye-view from the front truck, so the driver behind can keep an eye on what is going on ahead. Or, in the front truck the driver can have a drivers-eye view from the rear truck. That might sound like a rather uninteresting view of the back of his own truck at close quarters, but it also gives a very clear view of his blind spots, so it can be used to improve safety. 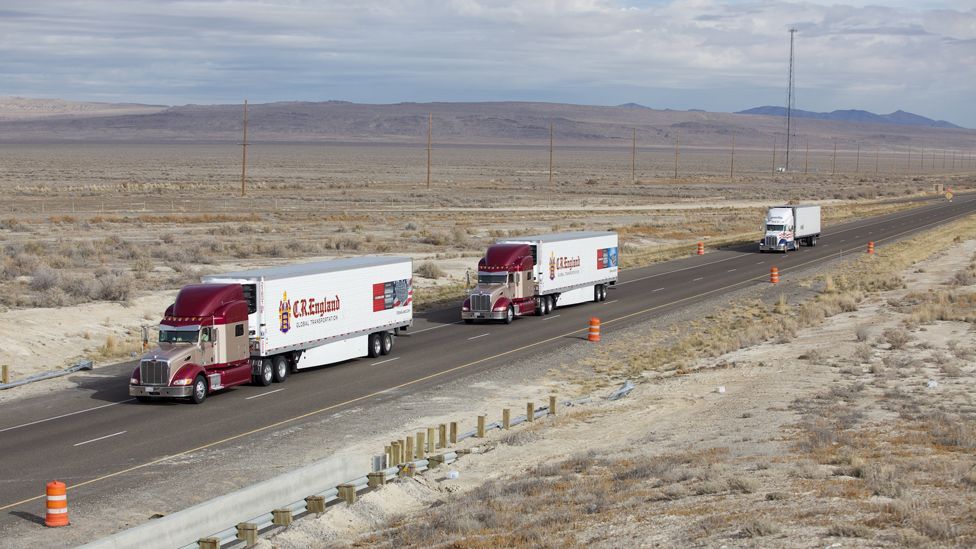 The front truck communicates directly with the rear truck, conveying information including braking, vehicle speed and engine torque. There are just two switches to control the platooning system. First, both trucks check in with a control centre, which makes sure they are on a suitable road, weather conditions are ok, and it is safe to engage. The Platooning Network Operations Center is ”like air traffic control, but much more automated,” says Switkes.

If they get the OK, it just takes a flick of a switch to engage the system. The rear driver still has to pay attention, and control the steering, but the brakes and accelerator are handed over to the computer.

Peloton is not the only company looking at autonomous truck convoys. A test project known as Satre (Safe Road Trains for the Environment) has just been completed in Europe. Convoys of trucks and Volvo cars were driven in formation at distances of just four metres apart.

I wondered about safety. What if something goes wrong with the system? Switkes says he has faith in the technology. “The car each of us drives each day has numerous systems that are safety critical,” he says, giving the example of stability control, which can apply brakes selectively to control or limit sliding. If it went wrong it could actually cause a vehicle to spin, but the systems are well designed and rigorously tested. 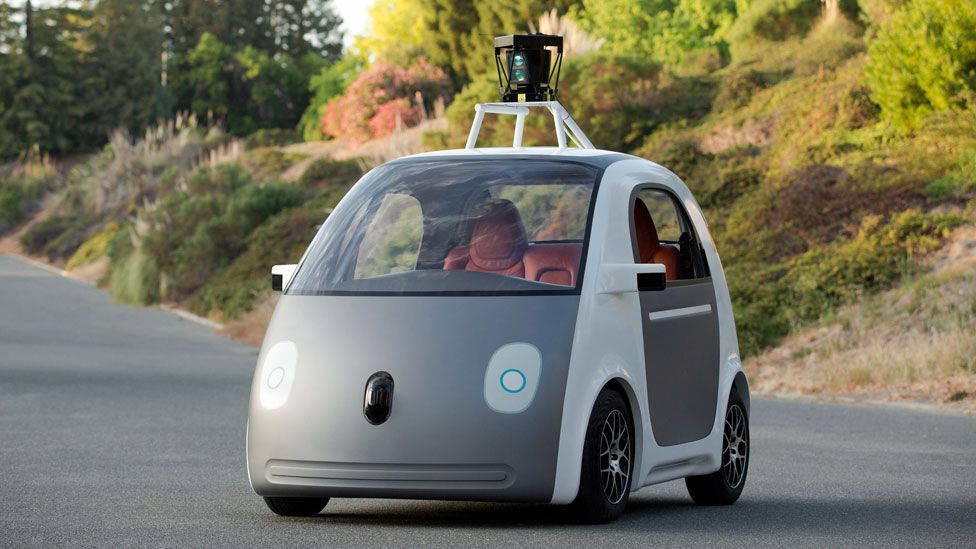 The technology is ready to move beyond the track trials we have seen elsewhere around the world, and is now hitting the roads.

“The nice thing about trucks is that you can very quickly build up a lot of test mileage because they are driven so many miles,” says Switkes.

The future of robot trucking may be just about to overtake you on the road.