Loading
In Depth | Human body
How long can you go without air?
Share using EmailShare on TwitterShare on FacebookShare on LinkedinShare on Whatsapp 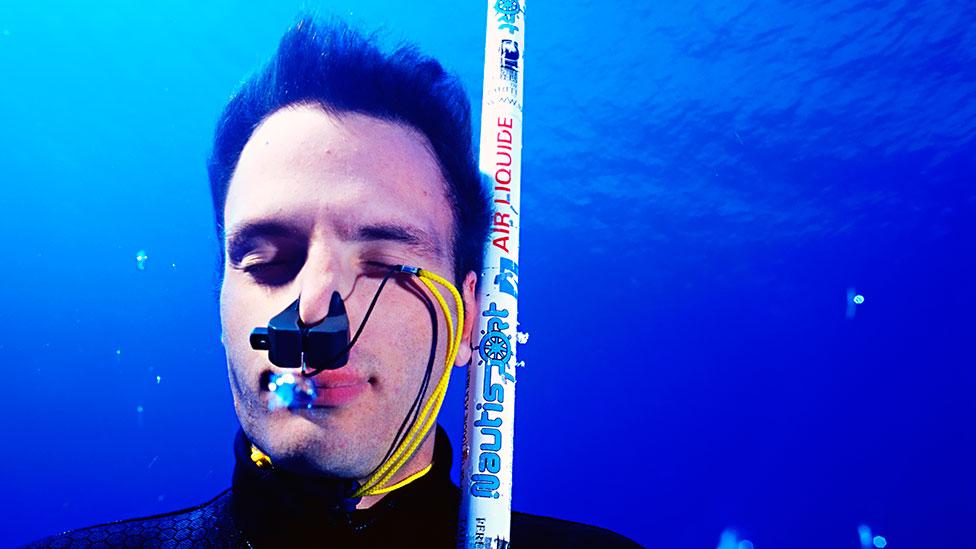 By Frank Swain 14th July 2014
A few people can hold their breath for an astonishingly long time, discovers Frank Swain. How do they do it?
L

Last November, 32-year-old Nicholas Mevoli lay on his back on the ocean surface, gulping air like a fish to pack his lungs with air. Then with a small splash, he dove under the water and began swimming down into the Dean’s Blue Hole – an underwater cave in the Bahamas. Mevoli’s goal was to reach a depth of more than 70 metres (230ft) – and do it on a single breath of air. It would end in disaster.

How long can someone stay underwater without surfacing? How long can anyone go without breathing? As humans push into our two final frontiers – deep space and the deep ocean – an understanding of our survival in airless environments is worth exploring.

In the emptiness of space, unconsciousness approaches very quickly. In 1965, a ruptured spacesuit briefly exposed a worker at Nasa’s Johnson Space Facility to an almost complete vacuum in a test chamber. He fainted after about 15 seconds. Contrary to popular belief, he wasn’t at risk from exploding, although at such a low pressure, exposed body fluids will vaporise at body temperature. His last memory before waking again was the saliva boiling away on his tongue.

Freedivers, who swim down to the limit of their ability without scuba equipment, fare better, regularly spending three minutes or more underwater. The freediver who holds the record for the deepest dive, Herbert Nitch, plunged to 214 metres (702ft) on a specially-designed submersible, remaining under the surface for four and a half minutes. Freedivers benefit from a physical reaction known as the ‘mammalian dive reflex’, which slows the heart when the body plunges underwater. (Even submerging the face in cold water is enough to trigger this effect.) 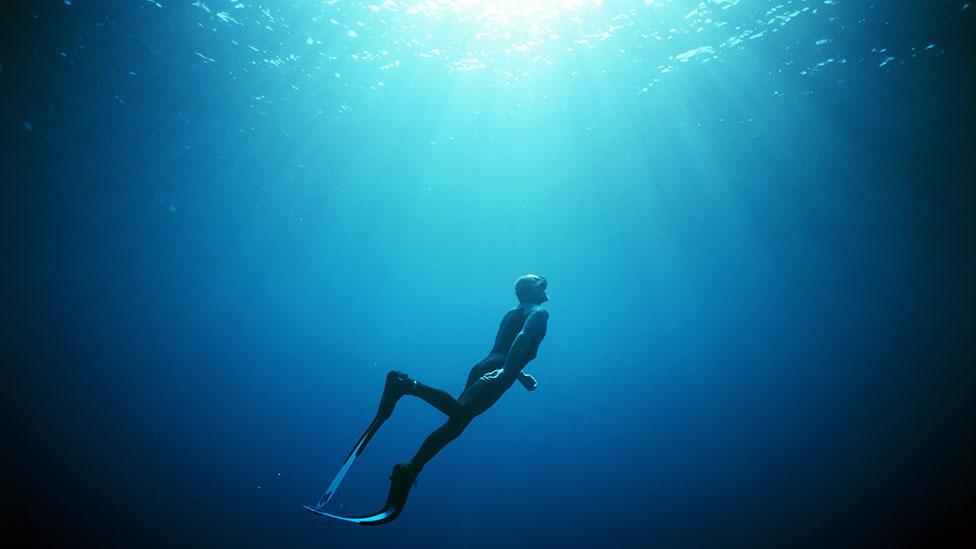 But although these dives are incredible for their crushing depths, we can last much longer in less extreme circumstances. Wallowing in the shallows of a London swimming pool, Danish freediver Stig Severinsen managed to hold his breath for 22 minutes in 2012, setting a world record that has yet to be beaten. How the professionals manage this, when average humans struggle to hold their breath for more than a minute, comes down to preparation, training, and physiology.

Before his record attempt, Severinsen spent almost 20 minutes hyperventilating with pure oxygen. This allowed his body to become saturated with oxygen, and also helped scrub his lungs of carbon dioxide. Both are important for long-term breath holding. While everyone knows that a lack of oxygen can be fatal, a build up of carbon dioxide can be equally dangerous. Without the ability to excrete this waste product through our lungs, the steady build up of carbon dioxide in our blood will turn it into an acidic brew. Muscle spasms and disorientation follow, as well as a racing heart and ultimately, death.

Trained freedivers and champion breath holders are likely to have built up physical adaptations that help them go long periods without breathing. A study of Brazilian fishermen found those who dived for prey had significantly larger lungs than colleagues who typically stayed above the surface. The famed Korean and Japanese pearl divers, meanwhile, were shown to flood their body with an extra 10% of red blood cells during their dives.

The limit of breath holding is dictated by how little oxygen and how much carbon dioxide you can tolerate in your body. Both of those, however, are governed in turn by your metabolic rate. A diver swimming through the ocean will use up oxygen and produce carbon dioxide faster than one lying motionless in the water. Freedivers often speak of the need for a meditative mindset in their sport – slowing their heart and emptying their mind to enter a state of deep relaxation. There are other ways to suppress metabolic activity. When US toddler Michelle Funk fell into an icy stream in 1986, she survived an estimated 66 minutes underwater, preserved by deep hypothermia that reduced her metabolic rate to almost nothing. 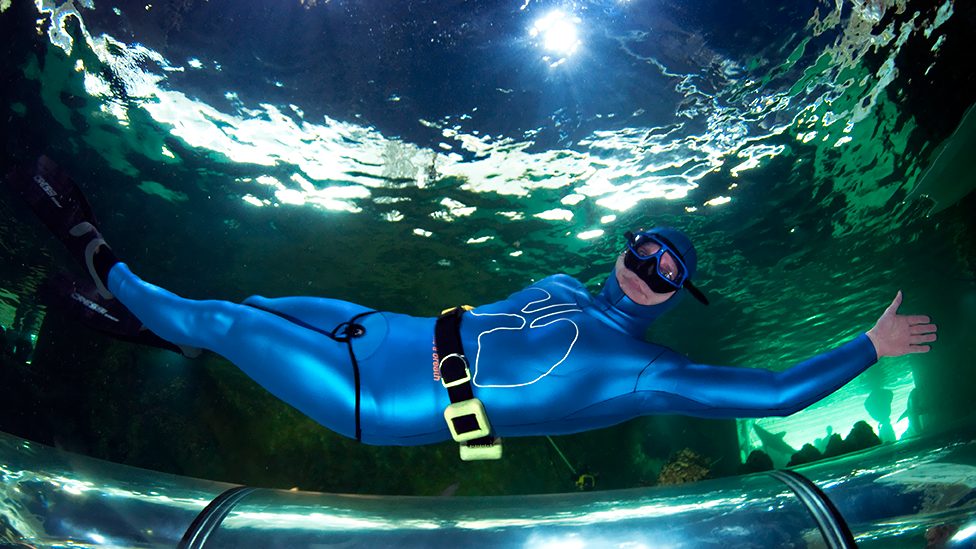 In 2012, Stig Severinson broke the world record for breath-holding (without swimming) with a time of 22 minutes (Morten Bjoern Larsen/AP Photo/Polfoto)

The undisputed champions of everyday breath holding, however, are diving mammals such as whales and seals. They can remain underwater for an hour at a time before surfacing. As well as a higher tolerance for carbon dioxide in their bodies, these creatures have muscle tissue rich in myoglobin, which traps oxygen and releases it during long dives. Myoglobin, the protein that lends meat its red colour, is so densely packed in whales that their flesh appears black.

Unfortunately, even the best training won’t allow you to mimic the physical adaptations of whales. So are there any alternatives to life without air? Well, yes. You can try bending the rules a little by breathing a liquid instead. Not pure liquid oxygen: at -200C, it would turn you into a human popsicle from the inside out and shatter your lungs the moment you tried to breathe. Instead, fluids that are rich in dissolved oxygen. A class of chemicals known as perfluorocarbons (PFCs) can dissolve high concentrations of oxygen and carbon dioxide, and are liquid at much more comfortable temperatures.  Liquid breathing may sound like the stuff of science fiction – and indeed, it makes its most famous appearance in James Cameron’s 1989 underwater adventure The Abyss – but it has its roots in successful research.

Perfluorocarbons are attractive because they are colourless, odourless, and non-toxic – much like air – and because they would allow divers to withstand high pressures when escaping from crippled submarines. Experiments in the 1960s showed that mice and cats submerged in perfluorocarbon liquids could survive for days breathing the oxygenated fluid. As the fluid holds far more oxygen than the same volume of air, theoretically you might be able to hold your breath a lot longer with one lungful of perfluorocarbon. However, the delicate structures of mammal lungs are not designed to withstand the force necessary to push four litres of liquid in and out of the body, making them a poor substitute for air over long periods, though liquid breathing has found some use in treating premature babies, whose lungs are not yet able to inflate on their own.

Without new technology, however, record breaking attempts are liable to end sadly. When Mevoli surfaced three and a half minutes after his dive, he had reached a ‘no fins’ record depth at 72 metres (236ft). But shortly afterwards, he lost consciousness, and despite receiving immediate medical treatment died soon after. His death stands as a solemn reminder to the freediving community, and to the world, that life at the limits will always be a dangerous place.

A freediver descends into the ocean with the aid of a pole – some people and animals have an impressive talent for holding their breath. (Science Photo Library)

A freediver descends into the ocean with the aid of a pole – some humans and animals can hold their breath for an astonishingly long time. (Science Photo Library) 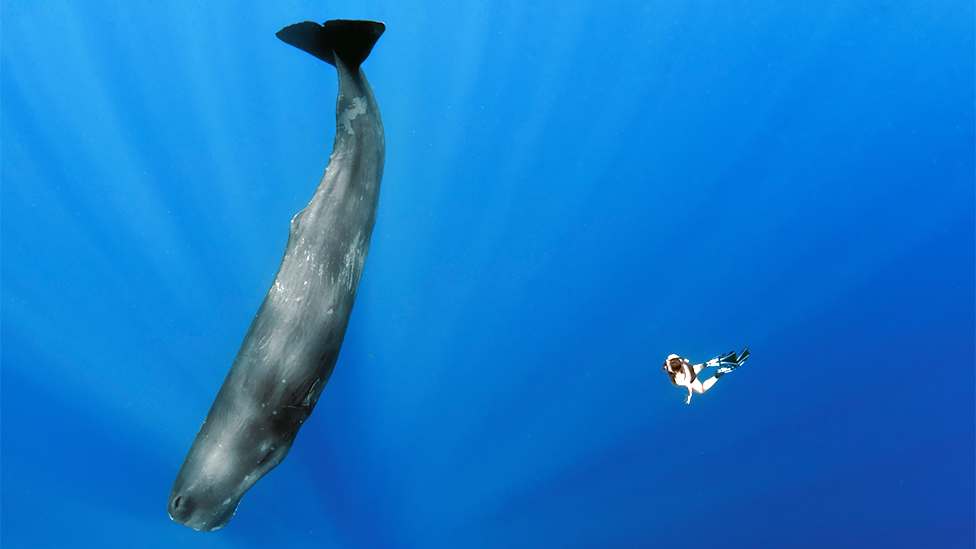 Sperm whales have been known to dive as deep as 2,000m (6,500ft) beneath the surface in search of food. That’s approximately two hours of breath-holding. (Science Photo Library)

Sperm whales have been known to dive as deep as 2000 metres beneath the surface in search of food. That’s approximately two hours of breath-holding. (Science Photo Library) 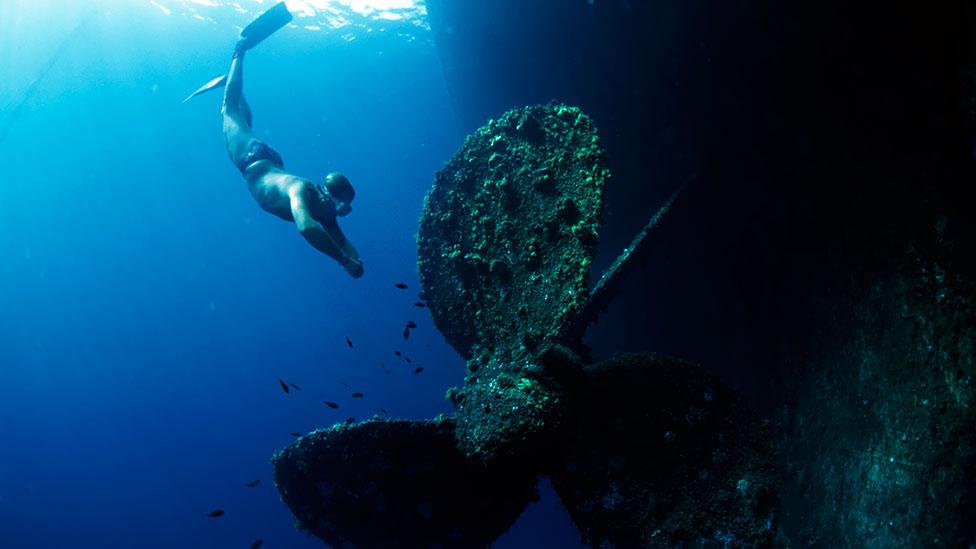 A diver approaches the wreck of a sunken ship. Freediving has been used in underwater salvage for thousands of years. (Science Photo Library)

A diver approaches the wreck of a sunken ship. Freediving has been used in underwater salvage for thousands of years. (Science Photo Library) 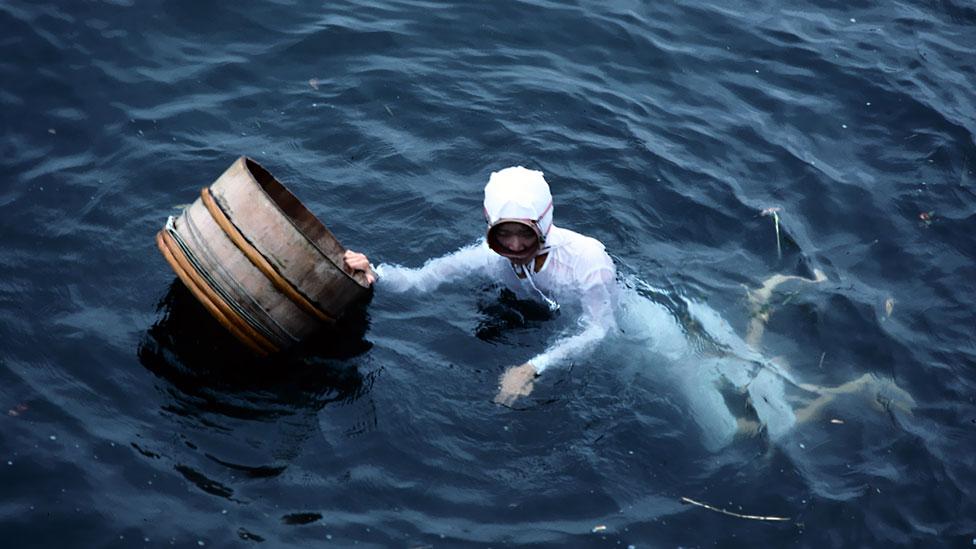 Pearl diving has been a feature of Japanese life for centuries. The 'ama' still do not use air tanks or scuba gear. (Science Photo Library)

Pearl diving has been a feature of Japanese life for centuries. The 'ama' still do not use air tanks or scuba gear. (Science Photo Library) 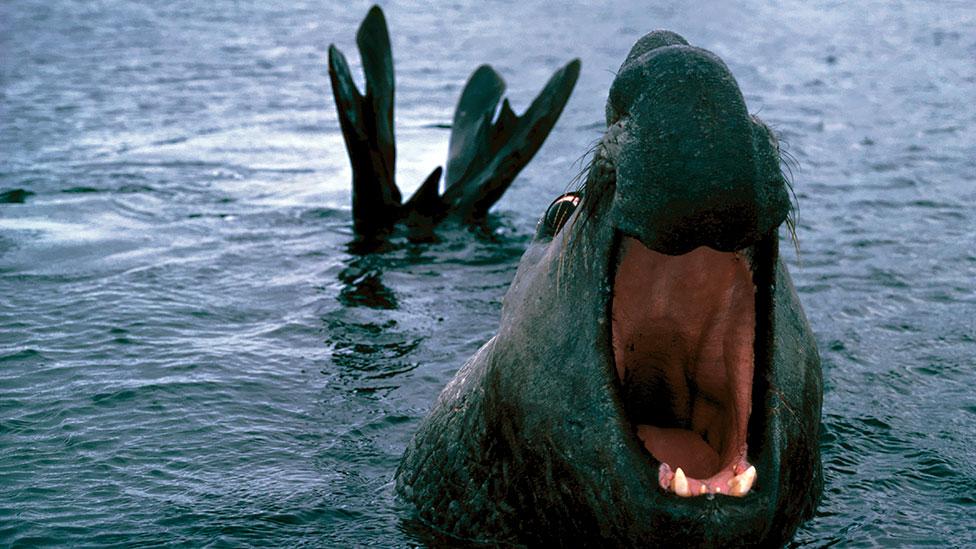 Some southern elephant seals can stay underwater for over two hours in search of fish or squid to eat. (Science Photo Library)

Some southern elephant seals can stay underwater for over two hours in search of fish or squid to eat. (Science Photo Library) 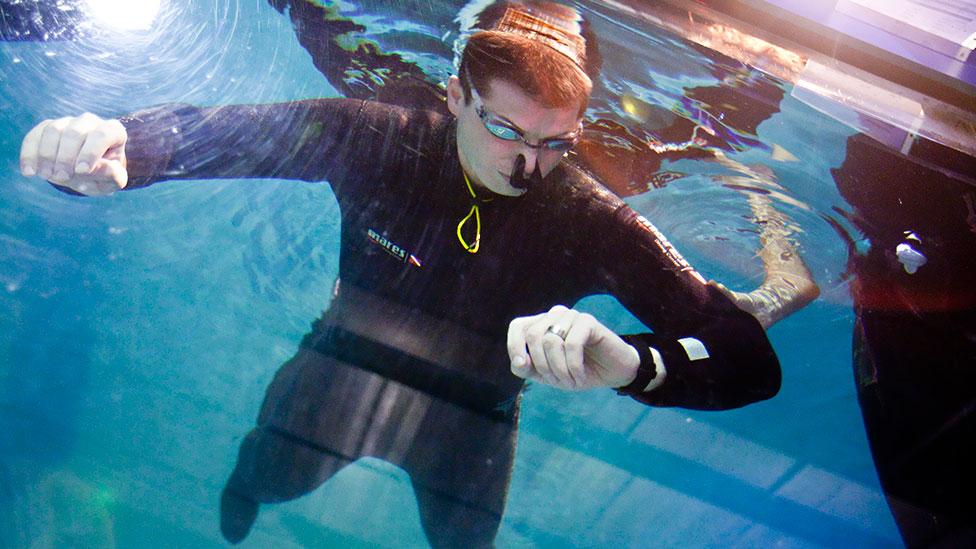 Pete Colat is a four-time record holder for breath-holding (without swimming), preparing by breathing pure oxygen for up to 30 minutes before submerging. (EPA/Ennio Leanza)

Pete Colat is a four-time record holder for breath-holding (without swimming), preparing by breathing pure oxygen for up to 30 minutes before submerging. (EPA/Ennio Leanza) 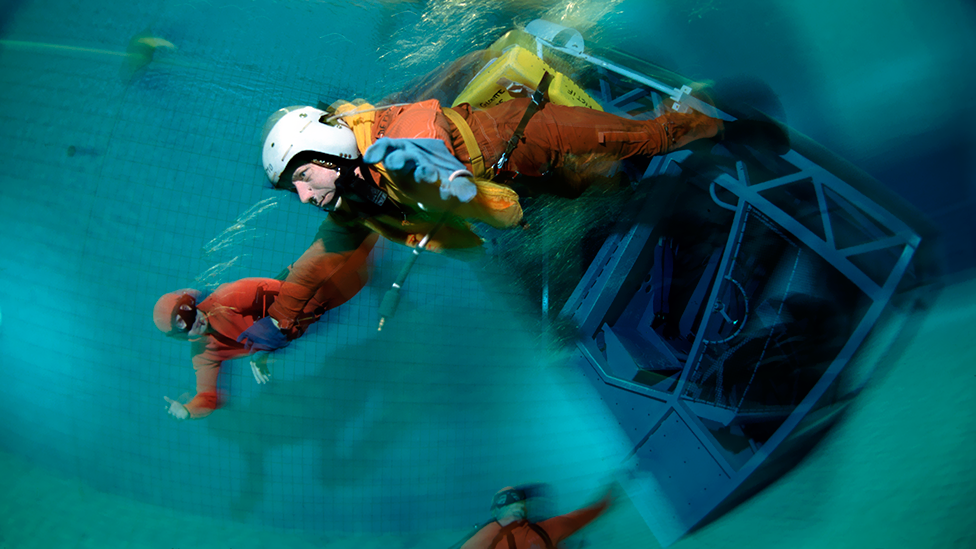 Breath-holding is part of the training for some jobs: a pilot practises escaping from a submerged aircraft cockpit in Brest, France. (Science Photo Library)

Breath-holding is part of the training for some jobs: a pilot practises escaping from a submerged aircraft cockpit in Brest, France. (Science Photo Library)

In Depth
1‘I bring the dead back to life’
Tomorrow's Lives
2‘I have lived underwater’
Will We Ever?
3Can we build underwater cities?
Beyond Human
4The people with ‘animal powers’
Around the BBC