Loading
Health | Psychology
Neuroscience: why do we see faces in everyday objects?
Share using EmailShare on TwitterShare on FacebookShare on Linkedin 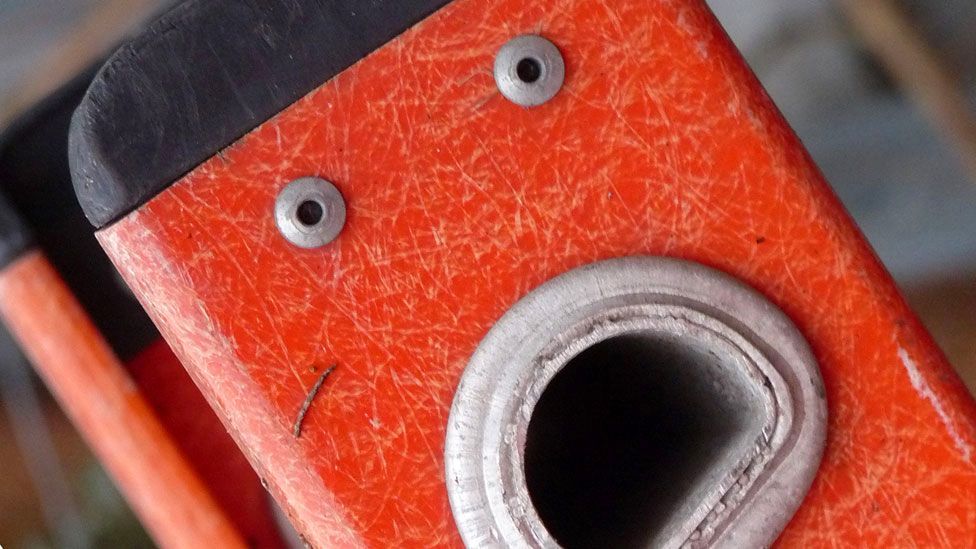 By David Robson 30th July 2014
From Virgin Mary in a slice of toast to the appearance of a screaming face in a man’s testicles, David Robson explains why the brain constructs these illusions.

We are primed to see faces in every corner of the visual world.

It’s not often that you look at your meal to find it staring back at you. But when Diane Duyser picked up her cheese toastie, she was in for a shock. “I went to take a bite out of it, and then I saw this lady looking back at me,” she told the Chicago Tribune. “It scared me at first.”

As word got around, it soon began to spark more attention, and eventually a casino paid Duyser $28,000 to exhibit the toasted sandwich. For many, the woman’s soft, full features and serene expression recalls famous depictions of the Virgin Mary. But I’ve always thought the curled hair, parted lips and heavy eyelids evoke a more modern idol.

Whichever Madonna you think you can see, she joins good company; Jesus has also been seen in toast, as well as a taco, a pancake and a banana peel, while Buzzfeed recently ran photos of peppers that look like British politicians. 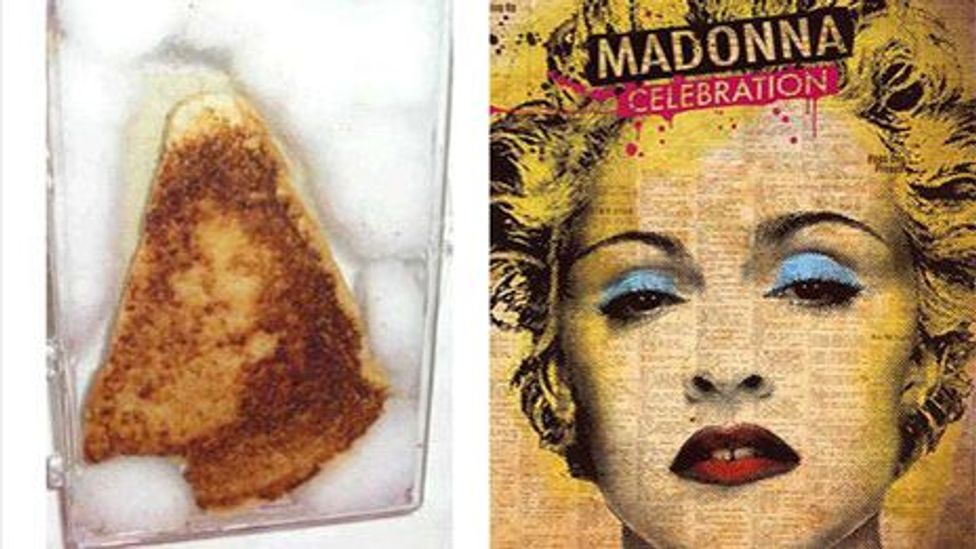 “If someone reports seeing Jesus in a piece of toast, you’d think they must be nuts,” says Kang Lee, at the University of Toronto, Canada. “But it’s very pervasive... We are primed to see faces in every corner of the visual world.” Lee has shown that rather than being a result of divine intervention, these experiences reflect the powerful influence of our imagination over our perception. Indeed, his explanation may mean that you never trust your eyes again.

Pareidolia, as this experience is known, is by no means a recent phenomenon. Leonardo da Vinci described seeing characters in natural markings on stone walls, which he believed could help inspire his artworks. In the 1950s, the Bank of Canada had to withdraw a series of banknotes because a grinning devil leapt from the random curls of the Queen’s hair (although I can’t, for the life of me, see the merest hint of a horn in Her Majesty’s locks). The Viking I spacecraft, meanwhile, appeared to photograph a carved face in the rocky landscape of Mars.

Today, it is now much easier to share our sightings with the help of social media. Just search for the hashtag #iseefaces. You can meet this wise little man sitting in a tree… 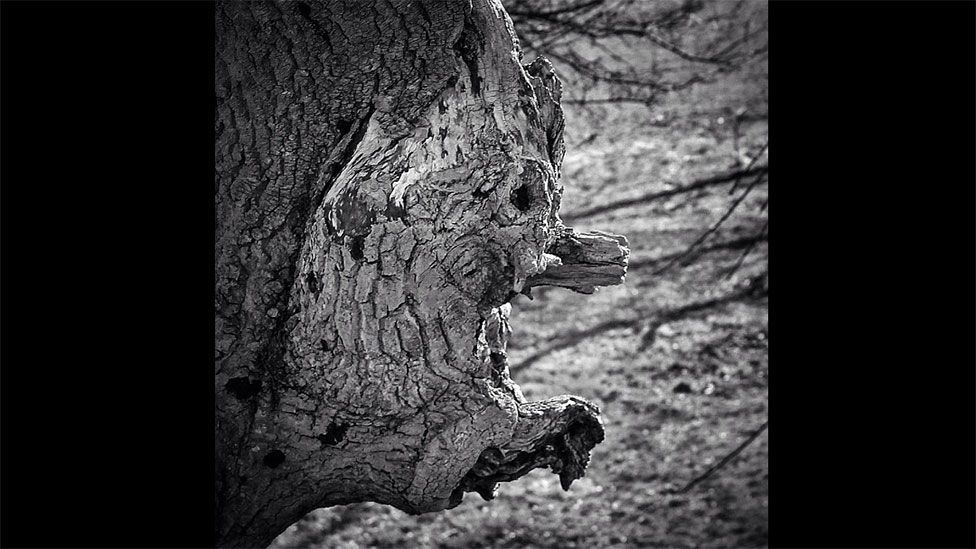 …a bin greeting you with a cheery hello 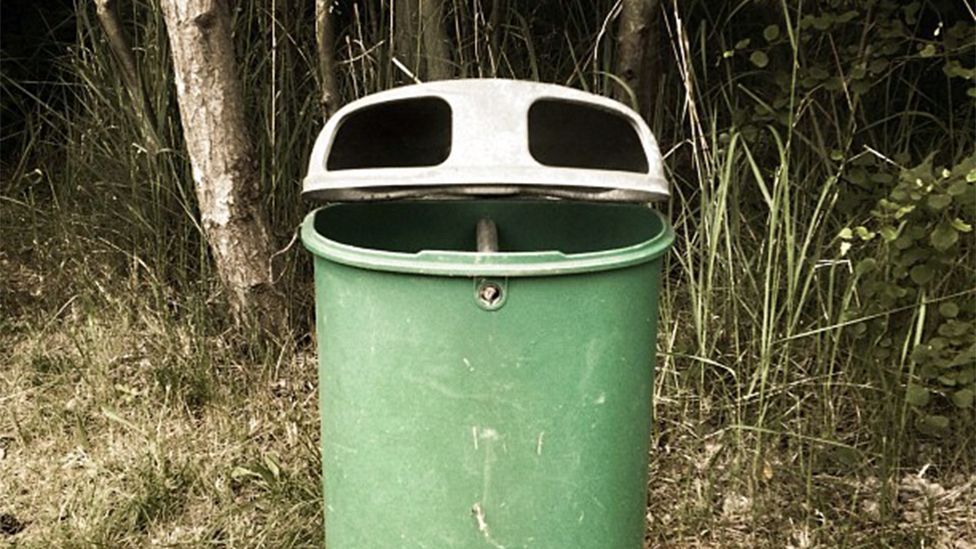 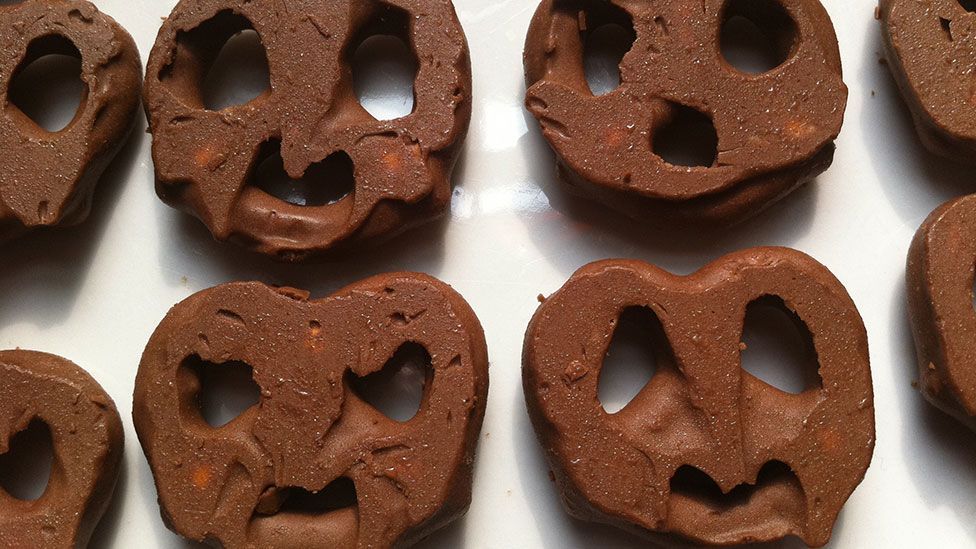 …and a kettle channelling Hannibal Lecter.

Perhaps the creepiest case was reported by urologist Gregory Roberts in Kingston, Canada. Can you imagine his patient’s shock when an ultrasound scan revealed this gawping moon-face trapped inside the man’s testicles? 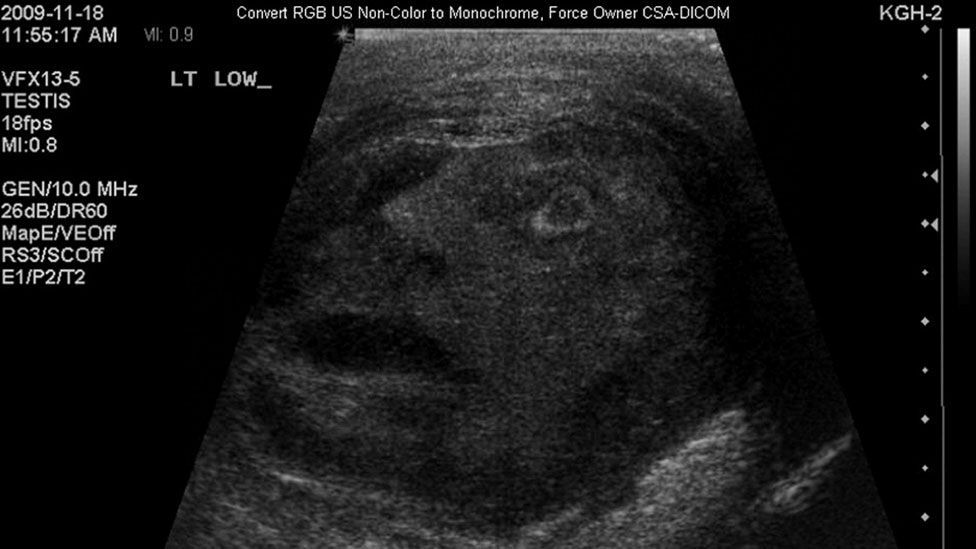 Indeed, once you start seeing these faces peering back at you, they start to appear everywhere. Some of these objects clearly bear a certain similarity to the emoticons we often use to represent feelings – the curved line of a smile and two circles representing the eyes. But sometimes strange creatures can peer out at us from the sparsest details. In one of Lee’s studies, subjects were shown random grey patterns – similar to static on a TV. Given some subtle priming, they reported seeing a person about 34% of the time. Any contours that appeared in the images would have been extremely fuzzy – yet somehow, the brain was conjuring the illusion that a person was staring back. “It turns out it’s pretty easy to induce this phenomenon,” says Lee.

Although we tend to think that our eyes faithfully report whatever is in front of us, the retina records an imperfect and confusing image that needs to be tidied up by the brain. And Lee thinks this “top-down processing” by the brain is what leads to pareidolia.

One way the brain makes sense of the mess is by making predictions about what we will see, based on our past experience, and then subtly projecting those expectations onto what we see. That way, it can piece together a clearer picture, even if the scene is obscured by poor lighting or fog, say. But it also makes our vision more subjective than you might think – in a sense you really do see what you want to see.

To test his hypothesis, Lee scanned participants’ brains as they looked at those images of grey “static”. As you would expect, Lee found high activity in the primary visual cortex as people started to pick apart the various aspects of an image, such as its colour or contour. But he also saw the frontal and occipital regions fire into action when the volunteers thought they saw a face, and these areas are thought to deal with higher-level thinking – such as planning, and memory. So this burst of activity may reflect the influence of expectation and experience, as predicted by Lee’s “top-down processing” theory. That, in turn, seems to have triggered a region called the right fusiform face area – the part of the brain that responds to actual faces, which may reflect the uncanny feeling that we are looking at a real thinking and feeling being. “If that’s activated, we know they really are ‘seeing’ a face,” says Lee.

That might explain why these faces produce the same subconscious reactions we have when we look at a real person. Last year, for instance, a team of Japanese researchers found that we begin to track the gaze of the phantom faces – in just the same way that we try to follow the eyes of a person in front of us. In other words, whenever you see this perplexed building giving the side eye, you might find an urge to see what’s making him gawp. 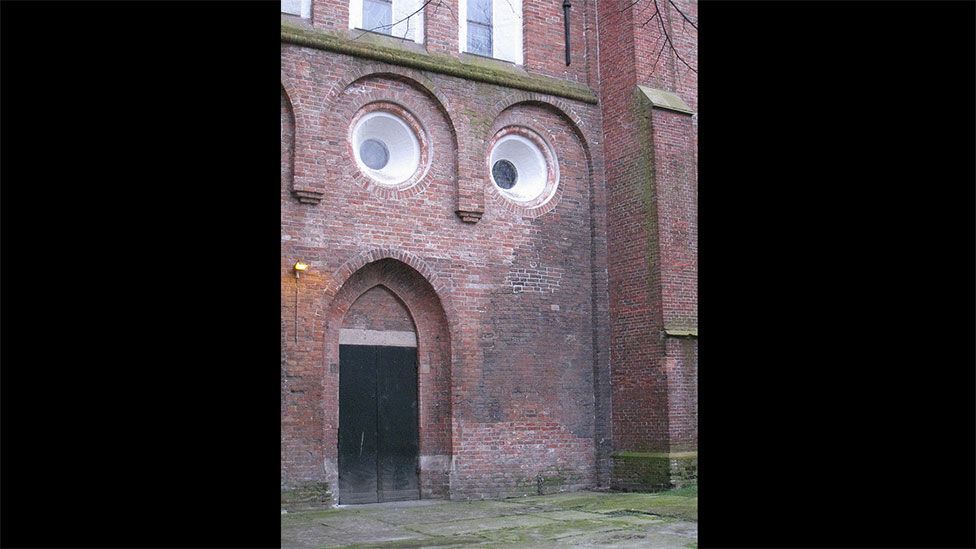 While Lee’s experiment helped to map out the circuits that may be involved, it doesn’t explain why we are so likely to see faces. One reason could just be that we see so many faces in our day-to-day lives, we’re expecting to see them everywhere. “Starting from childhood, they are the most common stimuli that we encounter in everyday life,” says Lee. There could also be deeper, evolutionary reasons for why we are especially prone to see faces. Human survival depends so heavily on others – whether we need their help, or fear their violence – that we need to react quickly and understand their motives. So the brain may be wired to quickly detect others whenever it can. If we occasionally make a mistake and see a face in tree bark, that’s less serious than failing to spot someone hiding in the bushes.

A more speculative view, according to other researchers, is that a similar mechanism could explain human spirituality. The idea is that the brain, being hard-wired to understand people and their motivations, tries to look for human-like intention in everything around us – be it a thunderstorm, a plague or a terrifying and abstract concept like death. In a bid to make sense of our fears, we therefore begin to personify them, filling the world with gods and demons. Intriguingly, Tapani Riekki at the University of Helsinki in Finland and colleagues have found that religious people are more likely to see faces in ambiguous photos than atheists. Whether this is true or not, the strength of our expectations can at least explain why some see the Mother of God in a piece of toast, whereas I see the Queen of Pop. Consider this image, for example. Do you see Jesus? 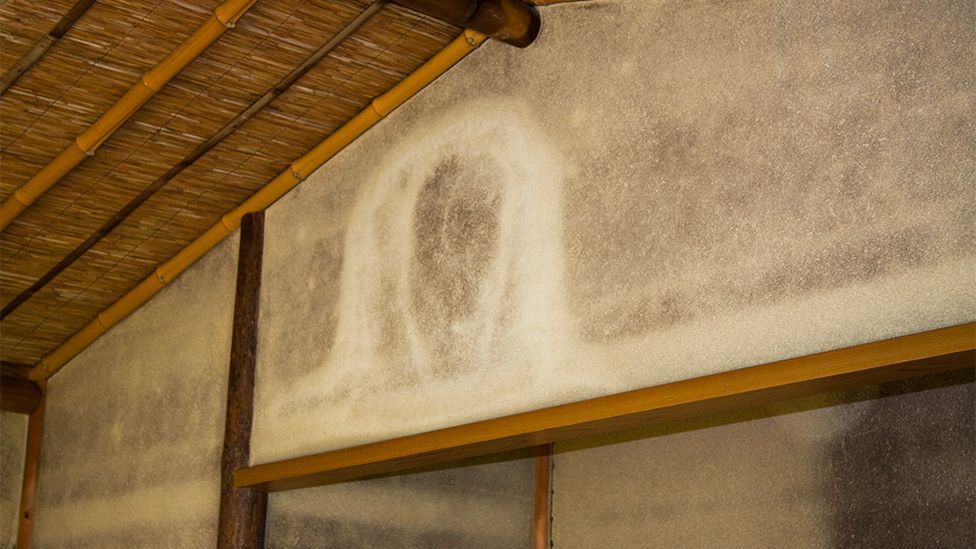 But perhaps the most common form of pareidolia in the western world is seeing faces in the fronts of cars, Sonja Windhager at the University of Vienna travelled to rural Ethiopia to find out whether people see the same thing. Questioning people on the roadside and in small restaurants, she was initially met with surprise. “They thought we were a little crazy,” she says. But even though the Ethiopians had not been exposed to films like Disney’s Cars or the adventures of Herbie, they soon understood the purpose of the study, and rated the pictures in much the way that Europeans do. For instance, cars with a big windscreen, round headlights and a small grill tend to be considered young and feminine: 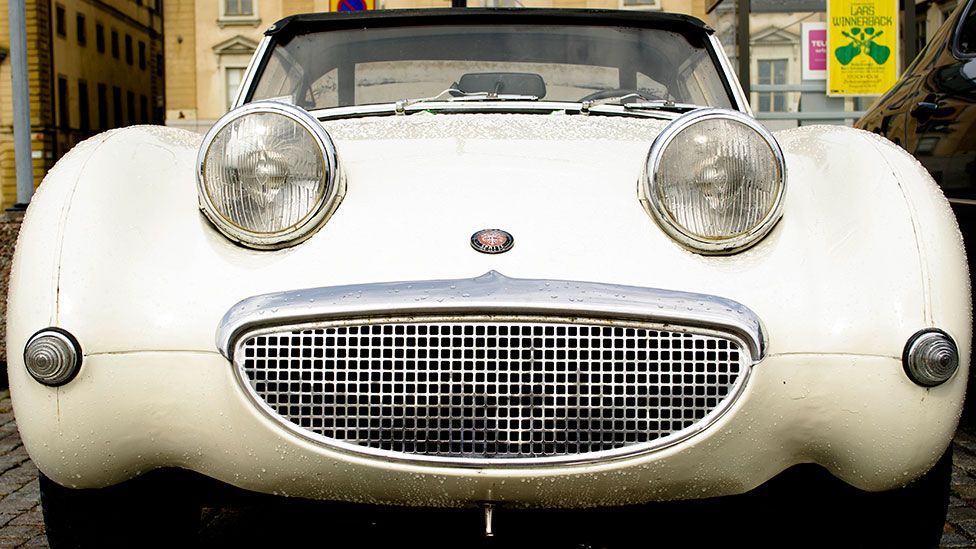 …while those with flatter headlights and a bigger, squarer under-body are older and more masculine: 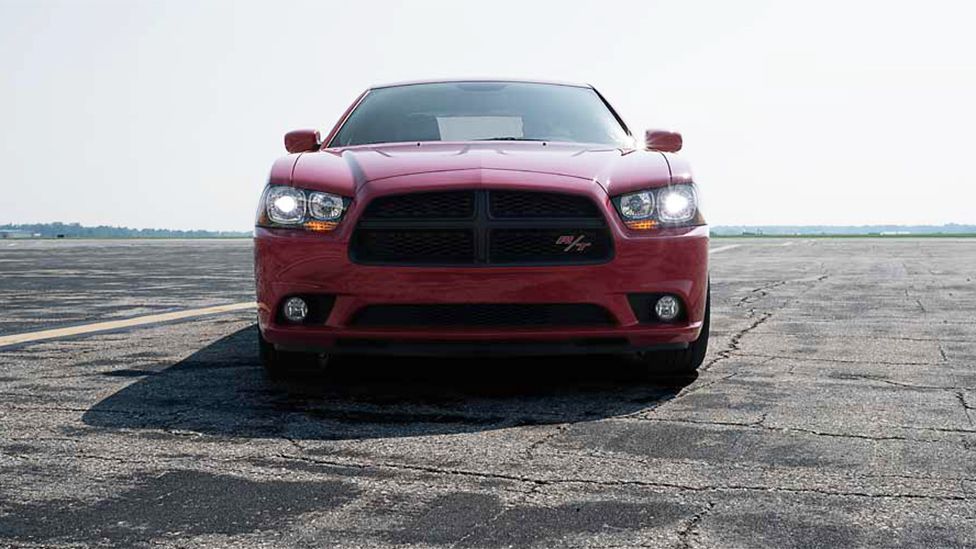 To Windhager, this underlines the way our brains are primed to read basic, biological information, like age or gender from anything that vaguely resembles a face – a fact that she thinks underlies pareidolia’s evolutionary origins. “It’s interesting to see how the modern environment makes us perceive things according to these ancient mechanisms,” she says.

Windhager’s other studies have found that consumers tend to prefer the more dominant cars – a fact that manufacturers are already using to their advantage; in 2006, for instance, the Wall Street Journal reported that “cuter” cars, like the iconic Volkswagen Beetle, were experiencing falling sales – perhaps because their owners were feeling intimidated by the growing number of large SUVs. So designers decided to create cars with more dominant expressions. The Dodge Charger, for instance, was designed with thin, sloping headlights, to give it a menacing look that could outstare the other cars. “The headlights seem to make eye contact the same way people do on the street," said Chrysler designer Ralph Gilles. "A mean face is what we're going for." Windhager wonders if the illusion of eye contact could impact road safety, however. For instance, we may run into danger if a car’s ‘face’ leads us to assume the car has a mind of its own. “Maybe children will think the car sees them coming – so they might not stop,” she says. Seeing cars with more threatening expressions might also make other drivers more anxious or aggressive, she speculates.

Such psychological effects could stretch to all corners of our lives. Various studies have shown a simple picture of a pair of eyes can lead people to act more honestly – a “nudge” technique that has been shown to reduce bicycle theft by more than 60% in certain areas. So it would be interesting to see whether a house harbouring a furtive face is less likely to be burgled, for instance.

There is something remarkable about the thought that the rag-tag bunch of characters that people share via #iseefaces could be guiding our behaviours in these subtle ways. We may not populate the environment with spirits in quite the way our ancestors may have done, but it seems that we can’t help but let some phantom beings into our houses, cars and Twitter feeds. At the very least, they can transform the ugliest and most soulless places into things of beauty and humour. Isn’t that right, little guy? 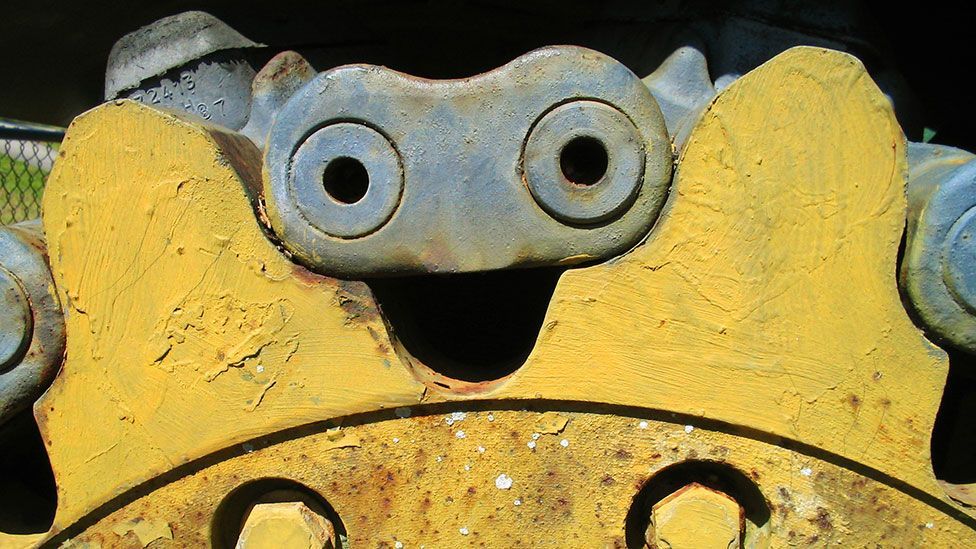 Neurohacks
1Why bad news dominates headlines
Neurohacks
2Why do we bite our nails?
Mosaic@Future
3The strangest form of pain
Tomorrow's Lives
4‘I can read your mind’
Around the BBC