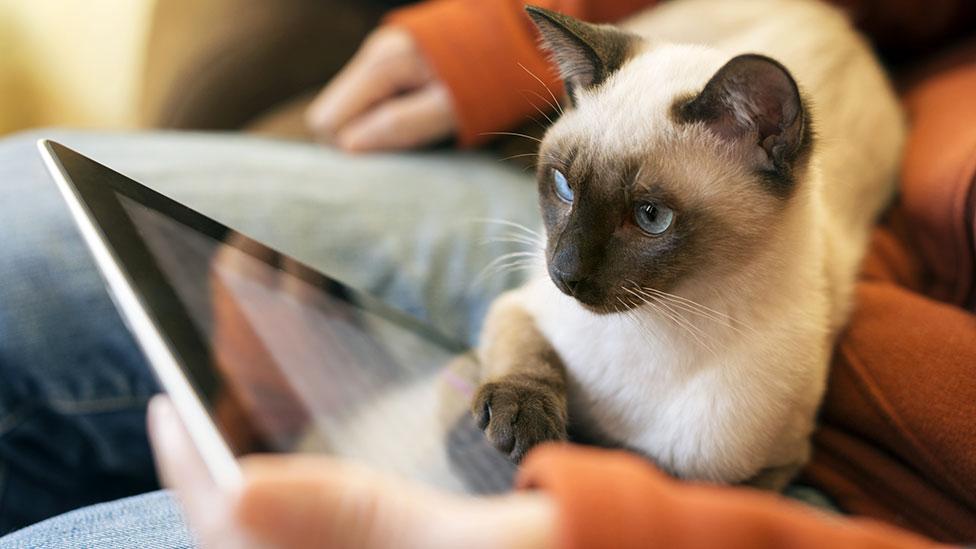 Esme, Molly, Quinn, and Emily live together in Austria. Their favourite foods are mushrooms, sweetcorn, and strawberries, and their hobbies include playing games on their touchscreen tablets. These four gamers, however, are not human – they are red-footed tortoises, and they live in the Department of Cognitive Biology at the University of Vienna.

Researcher Julia Mueller-Paula and colleagues wanted to see whether the reptiles could learn to complete a spatial cognition test, and to do it they used a computer that could be operated with a touchscreen. Half of the time, all the tortoises had to do was touch a blue circle on the right side of the screen with their noses, rather than the left. The other half of the time, they had to choose the left circle, rather than the right one. If they chose the "correct" circle, then they were treated to a food reward. 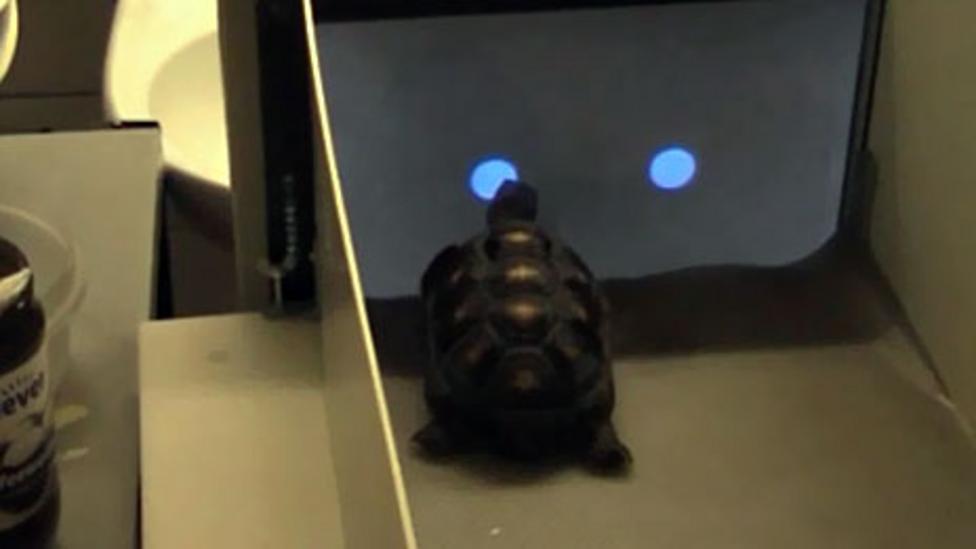 All four tortoises learned how to use the touchscreens during the training phase before the experiment started. But only two of them – Esme and Quinn – actually figured out how to use them to get their snacks. Mueller-Paula doesn't know why Molly and Emily didn't manage to solve the puzzle, especially since "up to this stage they had performed reliably and with levels of success comparable to those of Esme and Quinn." The study says something interesting about the spatial abilities of reptiles, but more importantly it reveals the usefulness of touchscreen technology for probing the animal mind.

Tortoises aren't the only ones. Kanzi is a male bonobo in his early thirties who lives with other bonobos at the Great Ape Trust in Des Moines, Iowa. He's been trained to communicate with researchers at the Trust by tapping an array of 400 lexigrams, visual symbols each matched with particular words, on a large touchscreen. And psychologist Jennifer Vonk has been using touchscreens as a window into the mental abilities of bears for several years.

In 2012, she wrote in the journal Animal Behaviour that while numerical cognition was perhaps one of the best understood areas of cognitive science, most studies had been conducted with social species: humans, monkeys, dolphins, crows or parrots, for example. Vonk, together with researcher Michael J Beran, argued that it is possible that the ability to reason numerically may be related to something inherently social, such as the need to track members of a social group. That's why she turned to black bears, a large, non-social predator. If numerical cognition was not related to sociality, the bears should have no problem solving numerical tasks.

Three American black bear siblings from the Mobile Zoo in Wilmer, Alabama, Brutus, Dusty, and Bella, were trained with a screen strong enough take a beating from the powerful mammals. When they nosed the proper spots on the screen, they were rewarded with both a melody and with a snack. The bears passed their tests, supporting the idea that numerical cognition is independent of social life, but as with the tortoises, her study underscored the versatility of the touchscreen as an indispensable instrument in the cognitive scientists' toolkit.

They're also increasingly important for animal welfare. Since captive primates don't have all the opportunities their wild cousins do to find food, avoid predators, use tools, or solve problems, zoos give them puzzles or games as a means of exercising their minds. Could iPads be used to that end? In 2012, Helen Boostrom provided six orangutans and 10 chimpanzees at the Houston Zoo with a set of iPads as part of her master's thesis research. Could the luxury touchscreens provide the apes with a new form of enrichment?

She discovered that the apes readily took to the brightly lit devices. In particular, they liked interacting with applications that were brightly coloured and included sound effects. Perhaps mirroring our own species, the juvenile chimps and orangutans had the most interest in the iPad and used the highest variety of the nine applications made available to them. 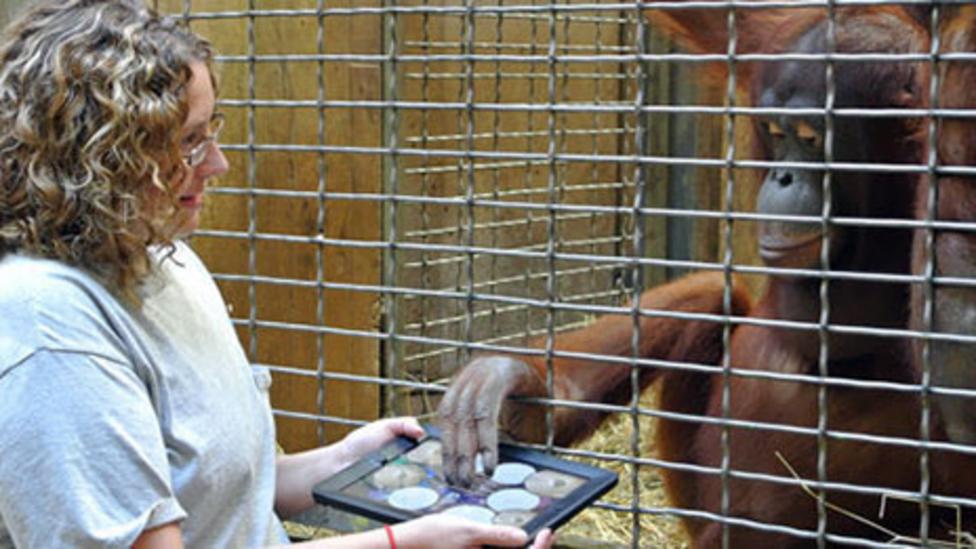 Could touchscreens provide apes with a new form of entertainment? (Courtesy of National Zoo – MCT)

Among the adults, females showed more interest than the males, though unlike the juveniles, each individual had his or her own preferred applications. Females were more adept with the iPads than were the males, according to Boostrom, which is consistent with observations from wild apes. Female chimpanzees, for example, use tools for termite fishing more often and more efficiently than males.

Crucially, the iPad and other devices can be programmed for individual apes to best fit their needs, says Boostrom. It's an innovation that would allow zookeepers to customise at least one aspect of the daily lives of each of their charges.

iPads have even been incorporated into the enrichment routine for the penguins at the Long Beach Aquarium of the Pacific, near Los Angeles. Two juvenile males, Jeremy and Newsome, became especially enthralled with their enrichment app, a game called Game for Cats. "Stalking the virtual mouse intently, [Newsome] tried to pick it up repeatedly with his beak," write the penguin keepers on the aquarium's blog. "Newsome especially seemed to like the squeak that the mouse made when he put his beak on the virtual critter." He also set the penguins' high score: 1600 points. 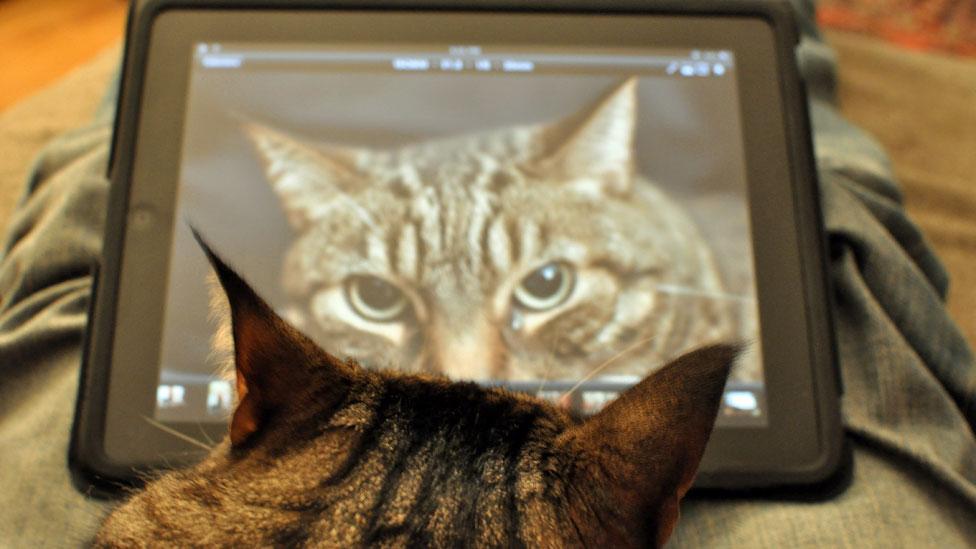 The bright graphics of a tablet capture the attention of many animals, cats included (Steve Lyon/Flickr/CC BY-SA)

It's intriguing that across species – orangutans, chimpanzees, humans, and even penguins – it's the children who seem particularly attracted to playing touchscreen games. Perhaps they can spend more time learning to play games since they don’t yet have to worry about the day-to-day grind of their lives. Maybe their younger minds are better able to learn new tasks, or maybe their developing sensory and perceptual systems are more attracted to the colours and sounds of video games, compared with their older counterparts. Whatever the case, at least one thing is clear: everybody seems to like taking some time off to enjoy a video game, once in a while.