Loading
In Depth | Neuroscience
Are we hard-wired to doodle?
Share using EmailShare on TwitterShare on FacebookShare on LinkedinShare on Whatsapp 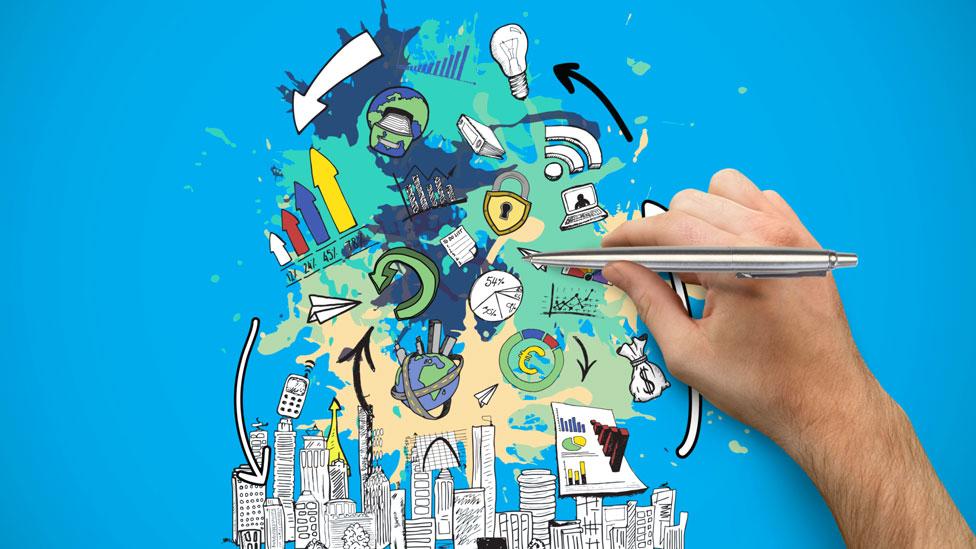 By David Robson 1st October 2014
Why are we drawn to doodling? As David Robson discovers, there may be much more to our idle scribbles and other drawings than we realised, and the story begins in the sands of the Australian desert…
F

For the Arandic, the Warlpiri, and other indigenous societies of the Australian desert, many conversations begin by carefully smoothing a patch of ground and clearing it of twigs and rocks. Over the next few minutes, little drawn figures quickly populate the rich red sand, as they tell tales of spirits, their ancestors’ history – or simply news about the neighbours. Once the story is over, the ground is wiped clean – allowing the designs to “go back to rest” in the soft earth.

The combination of drawn symbols and gestures are so eloquent that some linguists have even claimed that entire narratives could be relayed without the storyteller opening their mouth. But it is the drama of the narratives that really captivated Jennifer Green at the University of Melbourne. “I wasn’t prepared for the beauty of it – the gorgeous theatrical grace of the drawing,” she says. “They have a kind of mesmerising quality.”

This desert doodling is revealing answers to an essential question about all human beings: why do we draw? Almost from the moment we can pick up a crayon, we are drawn to scribbling and doodling – and that urge never stops. Whether we’re absent-mindedly sketching on the back of an envelope or drawing full-blown cartoons, we humans just can’t help but express ourselves through pictures. A closer understanding of these astonishing graphic languages might just offer us a clue for why that is. 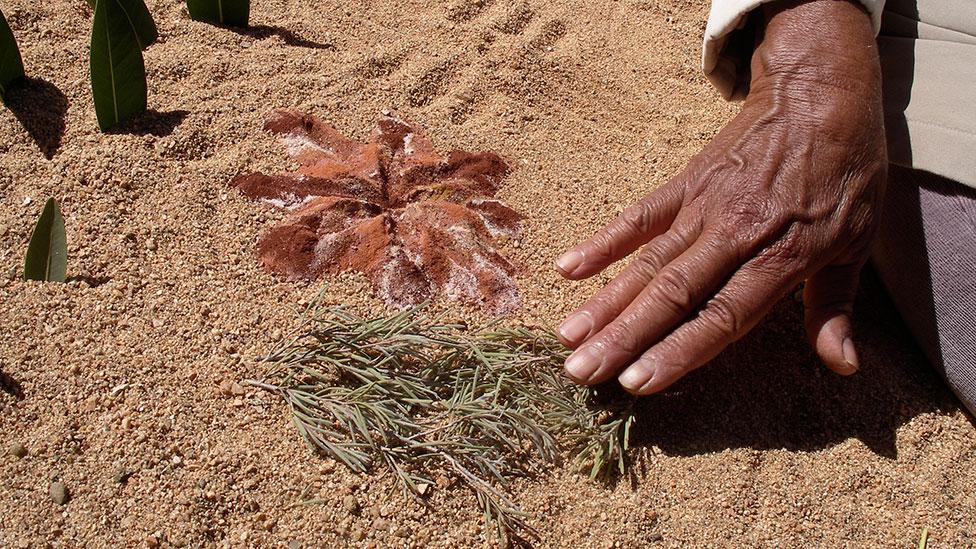 Over the last few years, the cognitive science of drawing has begun to receive some serious attention. Previously, researchers had been more interested in understanding the way we appreciate fine art, from Leonardo da Vinci to Jackson Pollock, but far fewer studies had concerned the kind of everyday scribbles we all produce. Yet it seems that our rough sketches do serve important functions. One study has found, for instance, that far from being a distraction, doodling can prevent our minds from wandering into daydreams about the past or future, boosting concentration and memory: groups given a drawing task recalled about 30% more information from a recording than those left to their own devices. Another, published a couple of years ago, showed that the distraction can soothe hurt feelings and regulate our mood.

That might offer some immediate reasons for why we are drawn to doodling. But recently, some researchers have argued that drawing can be thought of as a more innate trait: a form of language. Neil Cohn, at the University of California, San Diego, who has pioneered the scientific study of graphic novels, argues that drawings can have their own repeated vocabulary. For example, in cartoons, stars are widely used to represent dizziness after a punch, or “stink lines” to indicate a smell. They also have their own grammar – in which different types of images follow particular sequences. Along these lines, Cohn has shown that similar neural regions kick into gear when we view a comic strip as when we read a written sentence. All of which suggests that our urge and ability to draw should be considered alongside other linguistic skills.

So where do the Warlpiri and the Arandic people come into this? As soon as he heard of the existence of the Australian sand drawings, Cohn realised that they presented him with a new opportunity to explore the role drawing plays in language.

Much of his inspiration came from extensive conversation with Green, whose recent book Drawn from the Ground details the way these languages combine drawing, gestures, hand-signs and speech to form a single communication system. “In sand stories it’s very difficult to separate one part from the other,” she says. 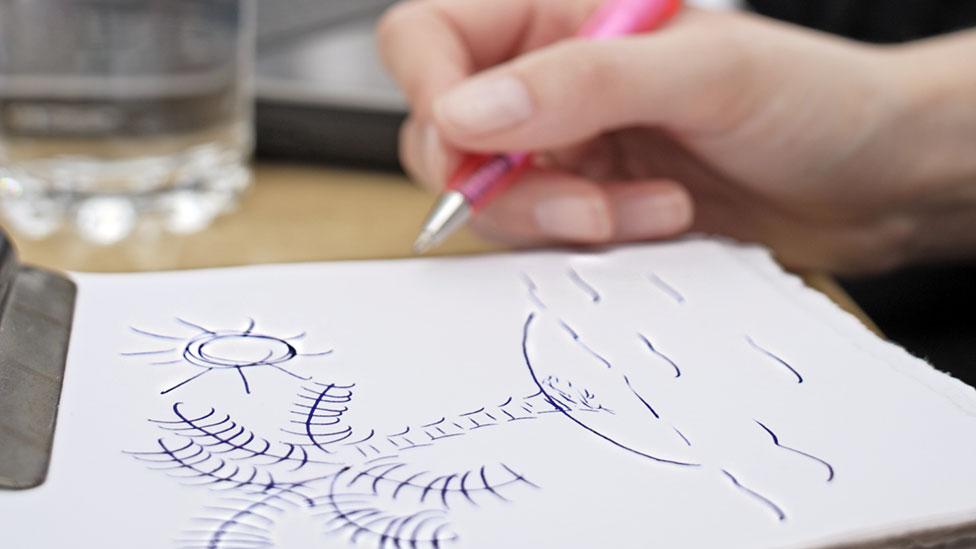 As Green points out, the sand stories are mostly told by the women of the societies – though men may also use drawn symbols in certain contexts. And even if the method of production has changed, they are still very much a central part of the people’s identity. “In the old days, the women would take a stick from a tree and shape it into a flexible implement for drawing,” says Lizzie Ellis, a Western Desert storyteller. “But the girls now use wire, made with elaborate handles.” The girls typically wear the “story wire” around their neck so that it is always easily available.

In general, objects are depicted in the ways they would naturally make marks in the sand. So a person is pictured as a U shape – the shape we make when sitting cross-legged. (Indeed, when a researcher showed Arrernte people a drawing of a horse from the side, as the animals are often depicted in western art, the locals instead assumed that it was lying flat on the floor, dead.) Other drawn symbols in the vocabulary include broken circles to represent a cave, spirals and circular shapes to depict bushes and trees, and stars of radiating lines to represent fire (based on the criss-crossing of the burning wood).

Importantly, the pictures can be combined into compound structures – so a small U inside a U represents a child on a mother’s lap, for instance. Specific hand signs performed above the drawings, meanwhile, can represent styles of movement, for example, as well as certain animals such as birds that wouldn’t leave an imprint on the ground. Such complex rules all helped confirm what Cohn had long expected from his previous cartoon-based research in the US: that pictures can evolve many of the characteristics of language. “It reinforced the ideas from a very different perspective with a very different system,” says Cohn. 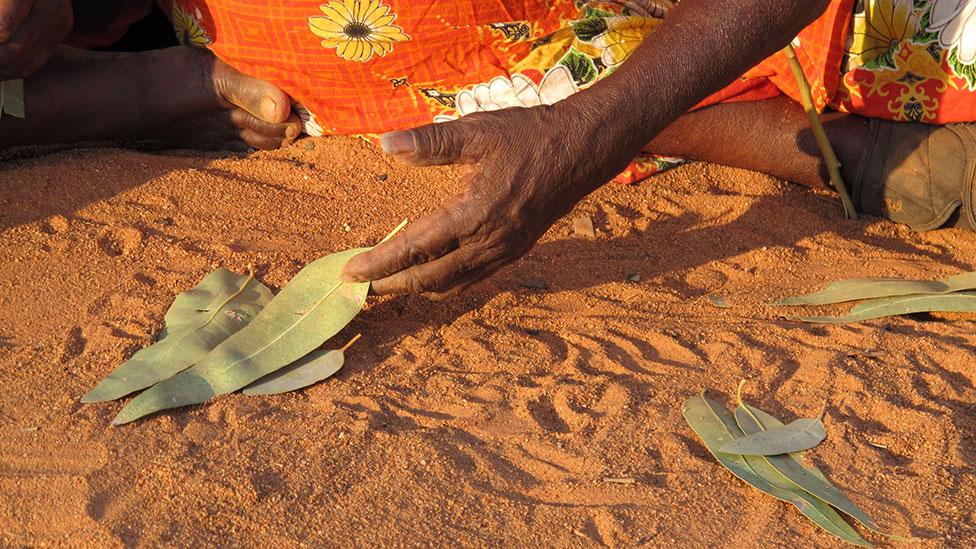 That might sound of academic importance only, but it could be crucial to our understanding of drawing more generally – starting with its origins. Over the last few years, prominent researchers such as Michael Arbib at the University of Southern California, have begun to consider that gesture and hand signs may have developed before speech – partly because other apes find it much easier to master gestures and sign languages, whereas they can never speak. Given his findings, Cohn suspects that we should add sand drawings to those early proto-languages. He imagines a situation where our ancestors were trying to communicate about a hunt, and so started copying animal tracks in the sand or soil as they discussed the best strategy.

Whether or not this view of the past is true – and Cohn readily points out that it is simply a “pet theory” that would be very difficult to prove – the sand drawings might at least help us reassess cave paintings, which probably came much later in evolutionary history. In the past, some people have tried to read them as masterpieces along the lines of western art – where a painting is produced by an isolated genius and left for posterity. If you look at the fleeting narratives of the Australian desert, however, it is just as possible that the drawings were constructed for active, real-time storytelling. “I scoff at any notion of the lone artist sitting in a cave drawing,” says Cohn. “It seems to me, at least, that these things should be seen as communication from an individual who is speaking and drawing in real time – whether it was a ritual, or just a guy trying to keep the kids entertained by drawing on the wall and telling a story.”

More intriguingly, a linguistic view of drawing might also explain our behaviour today – including our instinct for doodling in the margins. Young children, after all, are well known to go through a “scribbling” period where they will pick up a pen or crayon and make their mark on paper, walls and floors or any other surface they can get their hand on. There are also some signs that these drawings are rudimentary attempts at communication – the size of the random squiggles seems to correspond to the size of nearby objects, for instance. In light of Cohn’s work, this instinct could just be the graphical equivalent of “babbling” – the cooing noises that all babies make as they make the first steps towards speech. Perhaps we are just hard-wired to communicate in as many ways as possible and our environment determines which path becomes more dominant. 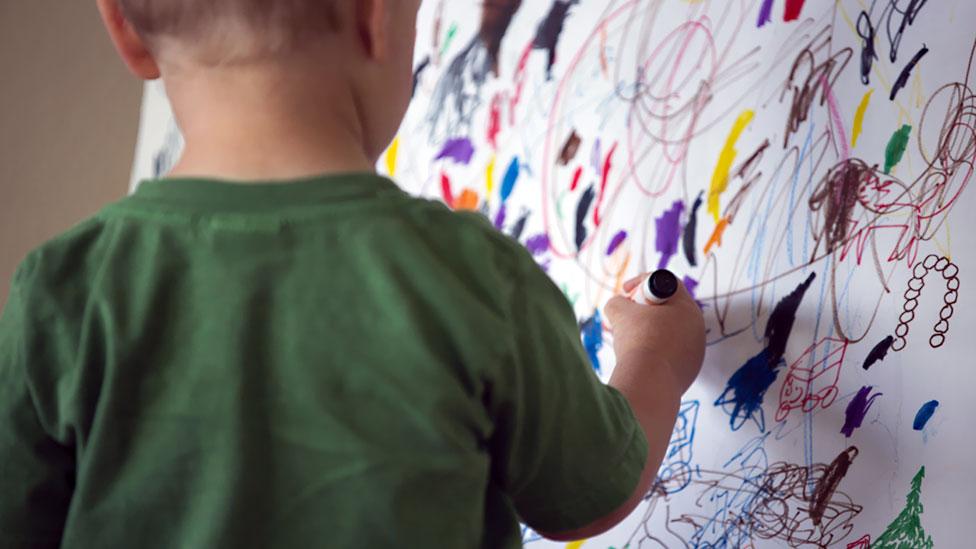 From a young age, children scribble - is it a graphic form of 'babbling'? (Getty Images)

If so, we might have all had the capacity to be better artists – it’s just we don’t tend to get the same chance to practise these nascent skills as the Arandic and the Warlpiri people. “The indigenous people of the Australian desert spend a lot of time sitting on the ground, so that drawing on that surface has become part of the repertoire of meaning-making,” says Green. “You wouldn’t tell stories in this way if you lived on a rocky mountain.” Nor does city life necessarily encourage most of us to draw in this way. The exception might be avid comic fans, like Cohn, who spent hours copying out cartoon strips as a child.

This is a point that touches Cohn particularly deeply, since he thinks it has a direct impact on the way children are taught. Language, he says, is best learnt through mimicry and imitation – in the same way that we all learnt to speak by parroting our parents – and drawing may be no different. Unfortunately, most schools in the West prefer to teach children to draw directly from life, which fails to tap into our language instinct. That might favour the few people who can learn to paint like Leonardo da Vinci – but at least as a starting point, more people could learn to create better, more intricate drawings if they were instead encouraged to study the conventions of comic books and absorb its vocabulary and grammar. Significantly, Japanese children do tend to learn in this way – and by their teens, their artistic skills are considerably more advanced than those of Americans.

Perhaps that will change with technology, however. The use of Emoji characters might seem to follow some aspects of grammar, for instance – they tend to be placed in certain sequences – though if anything, Cohn considers this more of a “pidgin” visual language, since it is very simplified. But with tablets and touchscreens, it is increasingly easy to share our own sketches with others through apps such as Draw Something, which at one point had attracted more than 100 million downloads. Various recent experiments, asking subjects to communicate silently using a form of the game Pictionary, have found that shared doodles soon begin to take on their own conventions and vocabulary a little like the Australian sand narratives.

New technology may also help the indigenous people of Australia to preserve some of their astonishing sand stories. “The capacity to visualise stories has made an amazing transition with the advent of iPads,” says Inge Kral at the Australian National University. She recently asked some women to record their narratives on a touchscreen and she was struck with how naturally they took to it. “It was amazing to watch them adapt to it so quickly to create some astonishing drawings.” In this way, the indigenous people of Australia may not just point to the past of language and drawing – they may also be showing the way into the future, too.

In Depth
1The bug we’re programmed to fear
Last Place on Earth
2Why we must save dying languages
Science & Environment
3Can you learn to be creative?
Beyond Human
4Do we need sex to reproduce?
Around the BBC