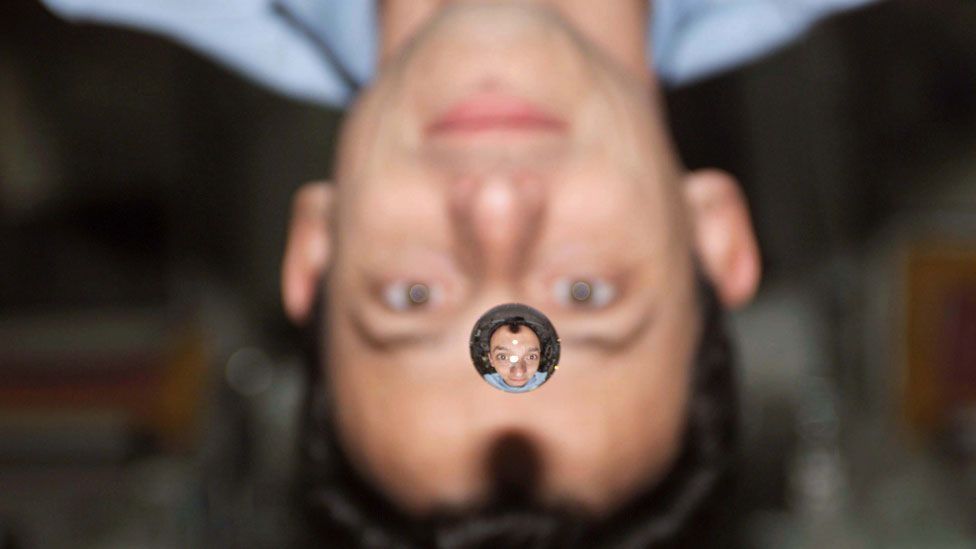 By David Robson 7th October 2014
Space can do strange things to the mind, from warped thinking to eerie feelings of disorientation, discovers David Robson.
A

As he was hurtling into orbit, Cosmonaut Gherman Titov had the distinct feeling that his body was cartwheeling through the air. It started as soon as Vostok 2 separated from its booster and he was thrust into weightlessness. “I felt suddenly as though I were turning a somersault and then flying with my legs up,” he said later on. In reality, there was no cartwheel – the feeling was simply an illusion, something akin to an out-of-body experience.

For many astronauts, these sensations tend to stop after a couple of days in space, but others suffer the discombobulating feelings throughout their trip. “I knew I was standing upright… and nevertheless I felt upside down, despite the fact that everything was normally oriented around me,” is how one astronaut described his experience on the Spacelab space station.

And disorientation is not the only strange experience faced by astronauts. Space travel can also cause distorted vision and duller thinking, and might even influence mood. These mind-bending consequences are sometimes known as the “space stupids”, and could potentially put future missions in jeopardy. So what is the solution?

At least some of the skewed perceptions of astronauts can be blamed on the stress and loneliness of space travel. A crew on the Salyut-5 space station once reported an acrid, toxic smell – leading them to return home early – but although the real reason is still not clear, some psychologists have suggested that it was a hallucination caused by the pressures of the mission.

But many of the strange illusions are caused by something that is even less easy to escape: the simple lack of gravity. Without the weight of the body to give it cues, the brain becomes easily confused about its orientation, causing, for instance, the uncanny feeling that you are permanently upside down or Titov’s strange sensation that he was spinning through space.

To get to the bottom of those feelings, one of the first questions is to find out what level of gravity is necessary to align our sense of orientation and keep it stable. Would we feel the same effects on another planet like Mars, for instance? That could be crucial to know if we are ever to set up home elsewhere in the solar system.

Early experiments had suggested that the threshold was very low – much less than the gravity found on the Moon. Yet observations of moon walkers would suggest otherwise; it was surprisingly common for those pioneers to take one small step for man, only to fall flat on their faces (see video, below).

Of course, it can’t be easy to manoeuvre a bulky spacesuit across the rocky landscape. But Laurence Harris at York University in Canada believes that the strange sense of orientation could, at least in part, contribute to their accidents.

Last month, Harris and colleagues published a clever experiment that attempted to work out exactly what level of gravity is necessary to give us a sense of orientation. The team asked their subjects to lie in a spinning “centrifuge” that seems to pull the body towards its centre – giving the illusion of a gravitational pull. As the volunteers took the stomach-churning ride, he then asked them to judge the alignment of a letter that would appear as either “p” or “d” depending on which direction they felt was up. From this he found that about 15% of the Earth’s gravitational pull (0.15g) was needed to give a definite sense of up and down.

Crucially, the gravity of the Moon falls almost exactly on that threshold – potentially explaining why astronauts still found it difficult to align their bodies and stop themselves falling over. But it was good news for future missions to Mars – at about 0.4g, it comfortably exceeds that threshold and shouldn’t lead to the same feelings of disorientation. 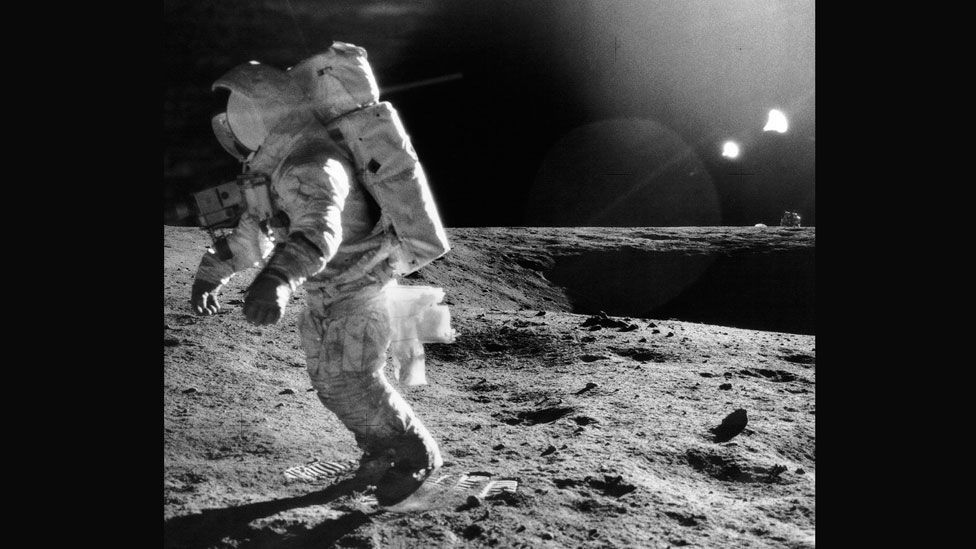 Walking on the Moon often led to stumbles (SPL)

Travel between the planets, where the pull of gravity is much weaker, could be trickier, however. The brain does seem able to acclimatise to the low-gravity environment and learn to use visual cues instead of gravity for orientation – for instance, learning that one surface is the floor, and one is the ceiling. But according to reports from Apollo astronauts, and those living on space stations like Spacelab and the ISS, it doesn’t take much to throw it into disarray, even after months in space. We are so used to seeing humans standing with their feet on the floor, for instance, that the sight of a crewmember floating upside down is enough to give the illusion that the whole cabin has suddenly spun upside down. Similarly eerie sensations can also come when an astronaut moves out of a module and then re-enters at a later point. “They come into the module and it looks completely new again,” says Harris. Or in the words of a Skylab astronaut interviewed by MIT researchers: “I whistle through the docking adapter and into the command module and zingy! All of a sudden it’s upside down.”

The feeling is apparently far more intense than simply standing on your head or viewing a photograph the wrong way around: it can be like entering a mirror universe where everything feels familiar and yet uncannily different. Sometimes, the resulting disorientation was even enough to make the astronauts vomit.

Even without the full-blown feeling that everything had turned upside down, low gravity can lead to more general cognitive problems and distorted perception. Gilles Clement at the International Space University in Illkirch-Graffenstaden, France, for instance, has found that objects appear shallower and distances appear shorter to astronauts on the International Space Station. And various experiments have suggested that astronauts have trouble with simple mental tasks – such as imagining the rotation of different objects – perhaps because our imagination works by comparing the movements with the position of our own body. 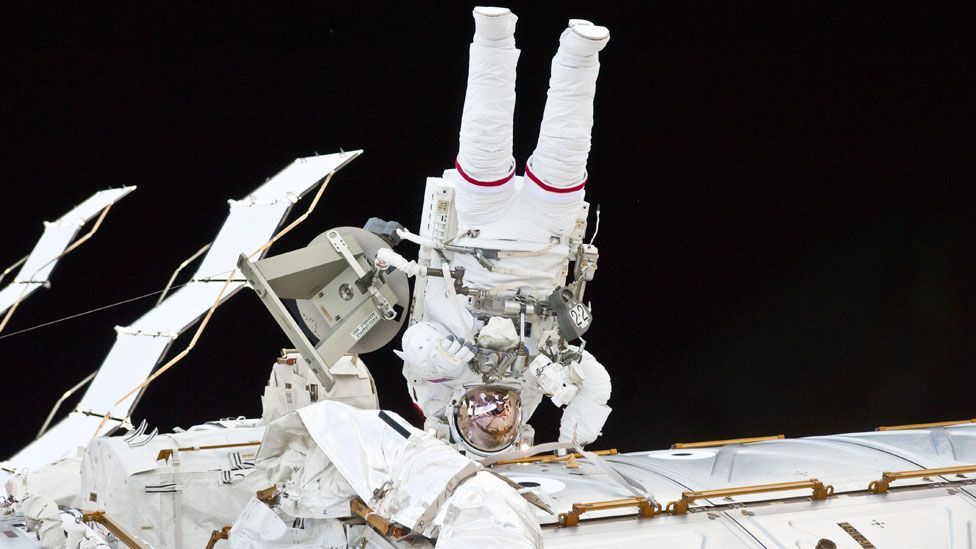 Which way is up in space? (Nasa)

The consequences could be serious. “You hear that people sometimes get lost on the space station,” says Harris. “And that could be an important safety issue if they are trying to find an escape pod, for example.” Some astronauts have also reported it creating extra risks during delicate technical missions: causing them to pull switches in the wrong direction, thanks to the confusion, or leading them to misjudge the speed of an approaching vehicle during docking.

So what is the solution? It is possible that some kind of device – like a pair of smart goggles – could help the astronauts to work out where they are and which direction they are facing. Alternatively, it could just be a question of some clever interior design. “The best way is to provide consistent visual cues. For example, to paint one surface brown and get everyone to agree to orient with that as "down". And you could maybe hang some pictures, especially with strong orientation cues – or movies of waterfalls,” says Harris. “These may not be totally frivolous suggestions when it comes to long distance missions.”

Marc Dalecki – also at York University in Canada – recently put some subjects through a “parabolic” flight that creates the sensation of weightlessness for short periods of time. He found that visual cues orienting the subjects were enough to reduce the problems with mental rotation in microgravity. So perhaps some clever decor that helps orient an astronaut really might be able to clear up some of the space stupids. 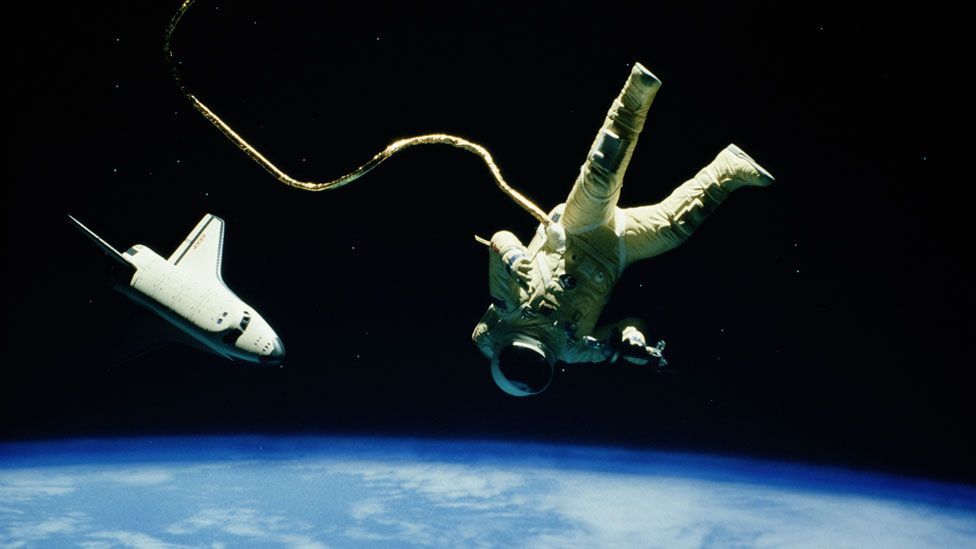 Even so, Dalecki points out that we are still a long way from understanding the full consequences of space missions – given the limitations of the current research. “It is difficult to form strong conclusions,” he says. “These are just first small steps.” Certainly, there are many more mind-bending effects of space to explore. Even something as simple as face recognition can depend on our sense of up and down, and might be influenced by microgravity.

And that’s not to mention the potential effects on our mood. There is some evidence that the vestibular system – which responds to movement and gravity – is linked to the areas of the brain that control our emotion. What we don’t know yet is how this might affect the well-being of astronauts. There is also some evidence that space travel changes the amount of blood flowing to the brain, potentially dulling wits more generally.

Eventually we may even need to consider the way low gravity effects children born in space. “Will their spatial abilities and neural coding be fundamentally different than ours. Or will they – like today’s astronauts – still show evidence of their terrestrial evolutionary heritage?” wrote Charles Oman at the Massachusetts Institute of Technology in 2007. “Perhaps one day future astronaut-researchers will discover the answers.”

For Harris, a greater understanding of our brains in space is of the utmost importance. “It’s clear that many more aspects of cognition in low gravity need to be investigated, especially when we are planning long flights to Mars where people will be in low gravity for months on end,” says Harris. “It would be dangerous to embark on that without a much greater database of findings.”


Share using EmailShare on TwitterShare on FacebookShare on Linkedin