If setting up home on another planet sounds a daunting prospect, then our space correspondent Richard Hollingham is here to help. And in the video above, former astronaut Jeff Hoffman describes his project to bring oxygen to Mars.
I

It seems plenty of people want to abandon the Earth. Interest in leaving the home world for a new start on Mars has never been greater and was one of the hot topics at the recent BBC Future World-Changing Ideas Summit in New York.

There is even evidence to suggest it may one day happen. Nasa is tooling-up for production of its new heavy launch vehicle, the Space Launch System (SLS), capable of conveying humans beyond Earth orbit; Mars One has recruited hundreds of volunteers for its reality-TV-funded one-way-trip to the Red Planet and the Mars Society is stepping-up its studies into what it takes to be a Martian. 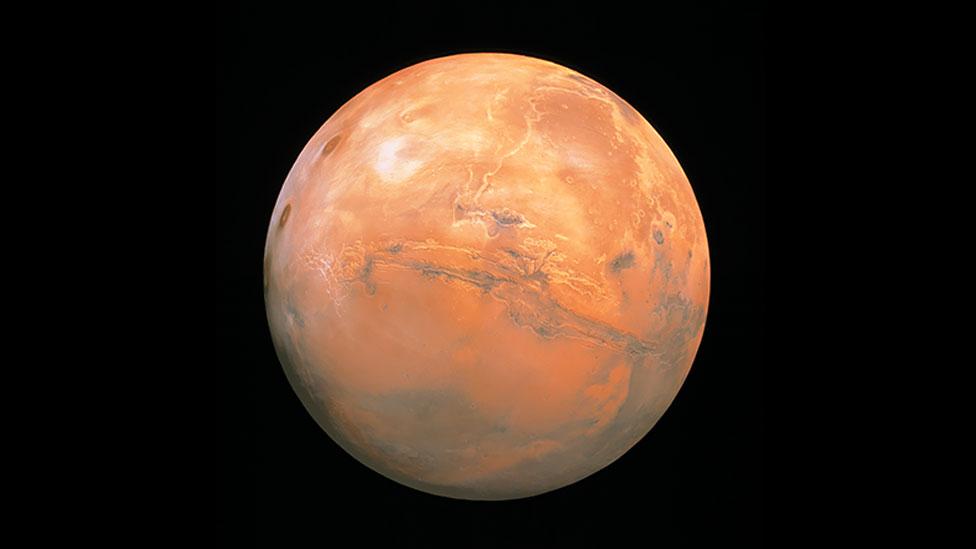 It is easy to imagine that human civilisation on Mars is inevitable. However, before you put all your worldly possessions on eBay and sign-up for a new start in Gale Crater, it is worth considering the obstacles that have to be overcome to build a sustainable extraterrestrial colony. It is not going to be easy.

Here are our five steps to building a new life on Mars:

Within the next decade Nasa will finally have a spacecraft capable of making the journey to Mars. The massive new 2500 tonne SLS, combined with the Orion capsule, will enable astronauts to explore beyond the safety of low Earth orbit for the first time since the end of the Apollo Moon programme in 1972.

Although any long duration mission is also likely to employ a habitation module, giving the crew a bit more room to move around in, the nine month trip to Mars is going to be uncomfortable and boring. It could also be extremely dangerous. 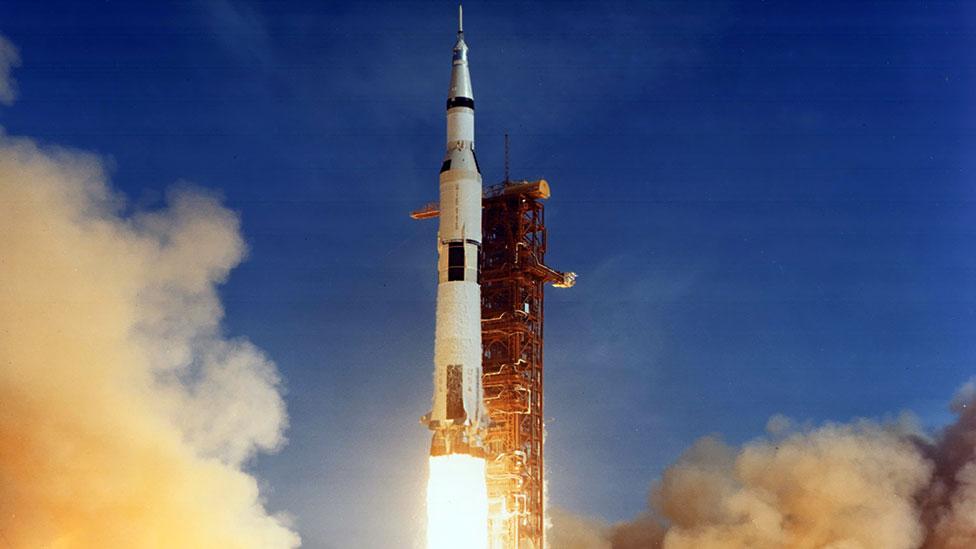 If humankind is to reach Mars, we will need rockets more powerful than anything built before (Nasa)

Quite apart from the risks of launch (the recent Antares rocket explosion proves we should never take this for granted), during the transit to Mars the crew will be exposed to damaging levels of radiation that will significantly increase their risks of developing cancer. For anyone looking to have healthy Martian children (see below), cosmic radiation could also harm sperm and eggs.

Landing safely on Mars is also a challenge. Nasa used an innovative skycrane to lower its one-tonne Curiosity rover onto the surface in 2012. The Orion capsule weighs almost 10 tonnes and that is before you factor in any service module or landing rockets. The agency is currently developing giant inflatable heatshields designed to slow spacecraft as they approach Mars, making landing larger craft feasible.

The good news is that getting to Mars in one piece is essentially an engineering challenge but, speaking at the BBC Future World-Changing Ideas Summit, former Nasa astronaut Jeff Hoffman put his finger on a far bigger issue. 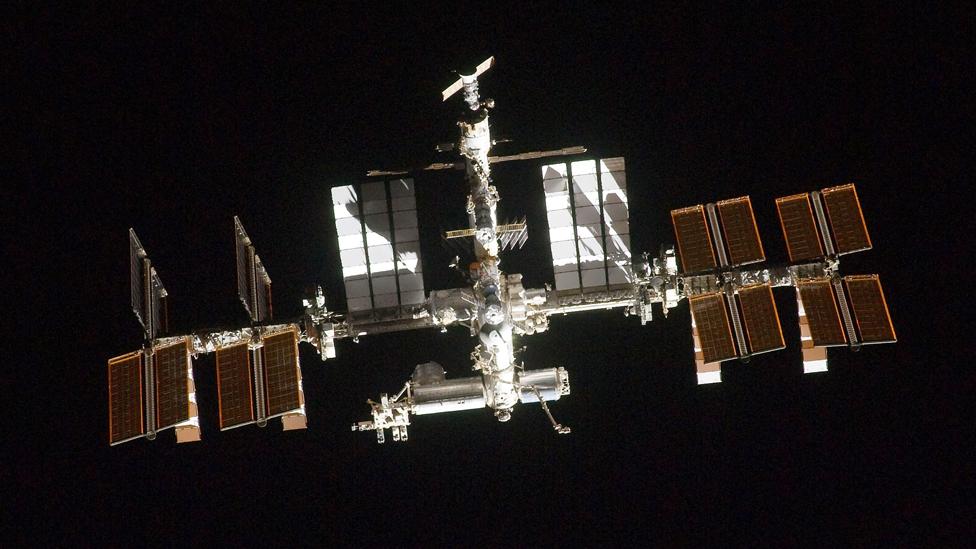 “It is going to be expensive,” he admitted. “What it will take to finance the human exploration of Mars is hard to say.”

The final figure is likely to be tens of billions of dollars, but Hoffman suggests that the new generation of entrepreneur billionaires who are “space nuts” might be part of a public-private solution. “[Paypal cofounder] Elon Musk says he wants to go to Mars and I hope he’s successful,” said Hoffman.

Having successfully landed on Mars you need air, water, food and power to survive. In the short term you could rely on supplies brought from Earth or sent on supply missions but eventually you are going to have to produce your own.

Nasa’s 2020 rover – essentially an upgrade of Curiosity – will carry an electrolysis experiment to extract oxygen from carbon dioxide in the Martian atmosphere. 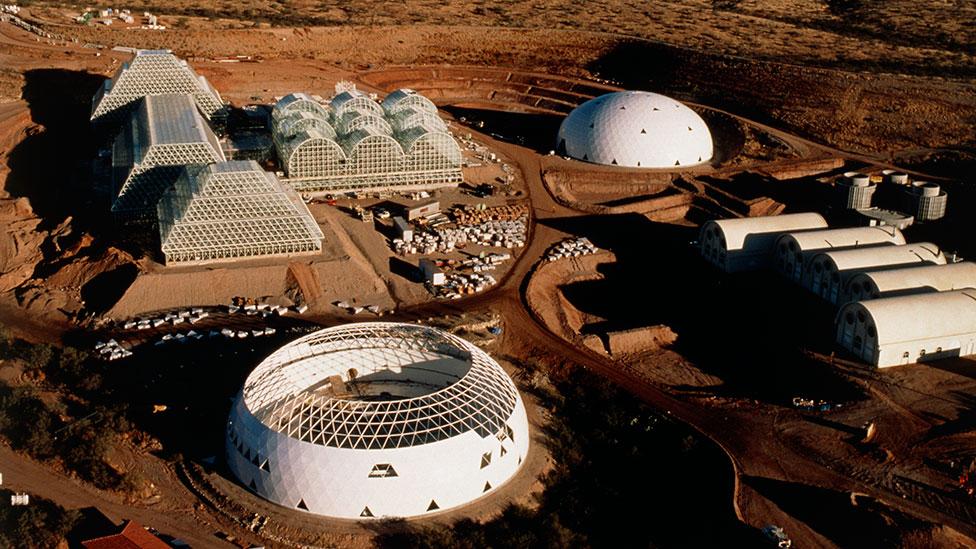 “For the very first time we’ll produce oxygen on the surface of Mars,” said Hoffman, who’s working on the instrument. “It’s a hundredth of the scale we’ll need for a human expedition, but it’s a start.”

Evidence suggests that Mars was once awash with water – with lakes, rivers and oceans. Today, it is highly likely there is still water at the ice caps and possibly under the surface. Extracting water from urine and sweat through an efficient recycling system – pioneered on the International Space Station (ISS) – will certainly help, but will not be enough to sustain a community, so tapping into a local water source will be essential.

Producing food on Mars could be much more difficult. The non-profit Mars Society has been experimenting with growing food in its isolated desert research station in Utah. “There was some interesting biology we were generating but not appetising biology,” says software engineer and Mars enthusiast Digby Tarvin of his last stint working at the base 10 years ago. 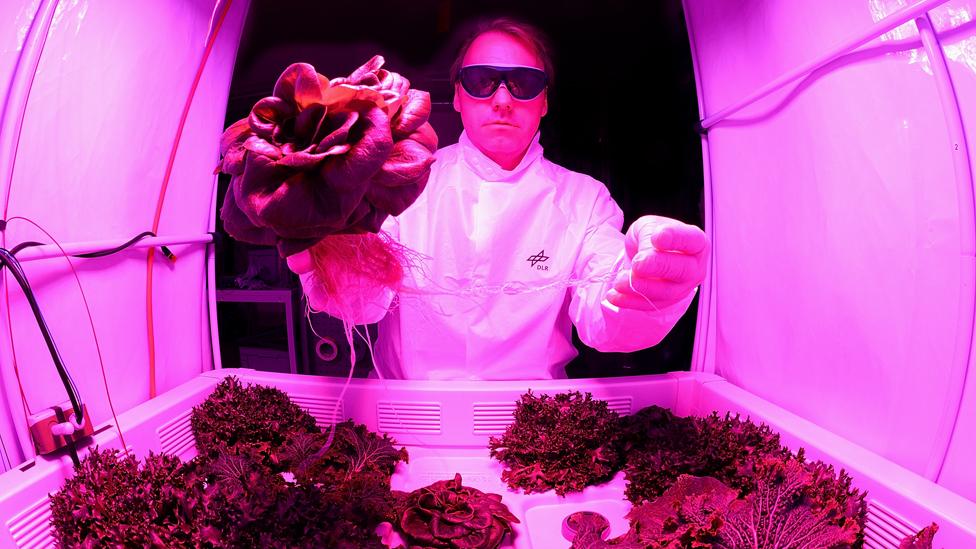 Tarvin is about to return to the Utah research station to take command and says a lot of progress has been made since then. “People have grown some edible greens but it’s not at the stage we can live on what we produce,” he says. “One of the research projects we’ll be undertaking is to use the local rock as a growing medium by adding sufficient minerals and additives.” The idea is that, ultimately, colonists could grow crops in Martian soil.

As for power, that should be relatively straightforward, with fuel cells and nuclear batteries augmented by solar arrays. Nevertheless, all these resources will need to be carefully managed, which is why the next step is so essential:

I have written before of the challenges of governing an extraterrestrial colony. The early missions – particularly those involving space agencies – will almost certainly be run with a hierarchical command system. The past 50 years of human spaceflight have taught us that, in the extreme environment of space, this is the safest way. However, there is a fine line between a Star Trek-type command structure and a brutal military dictatorship, and as the settlement matures, some sort of democracy is going to be favoured.

“A space colony is a tyranny-prone environment,” says Charles Cockell, an astrobiologist from the University of Edinburgh who is also leading research on developing a constitution for space habitats. “If somebody gets control of oxygen, they could very well have control over the whole population and threaten dire consequences in return for extraordinary levels of power.” 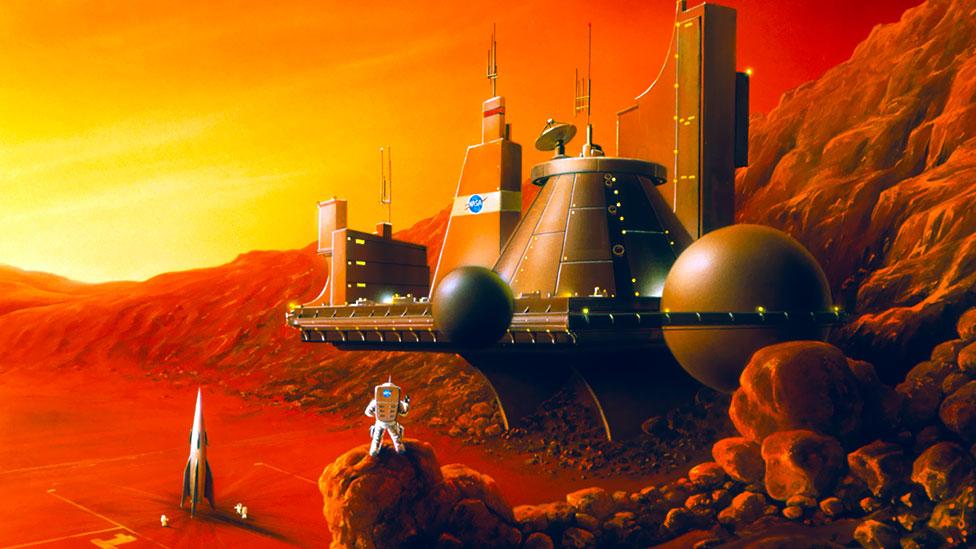 As a commander of a space colony on Earth, Tarvin is one of the few people to have any experience of overseeing a Mars base. “It’s certainly not a Star Trek-style military environment,” he says. “It’s a small group of highly motivated people and it really doesn’t take much effort to manage them.”

A government also needs all the structures that go with it. Any new society needs an economy as well as systems to maintain the habitat, provide employment, health, childcare, social care and education. In short: Mars needs bureaucrats.

The first Mars settlers will be living in the capsules they arrive in, perhaps augmented by a few extra capsules sent ahead and maybe some inflatable domes. But just as settlers will be utilising local resources for water, food and energy, they will also hope to use local materials to build a larger colony or even spin-off colonies.

At the very least, it would make sense to use Martian rock to bury the habitats to help shield occupants from radiation. Later, the surface could be drilled to form caves or rock could be excavated for building materials – just as we build houses from stone on Earth. It might also be possible to extract useful minerals for metals or glass.

Robert Zubin, the president of the Mars Society, is one of the leading exponents of terraforming Mars – transforming the planet from an airless, barren world to an oxygen-rich green and pleasant realm with a fully functioning ecosystem. 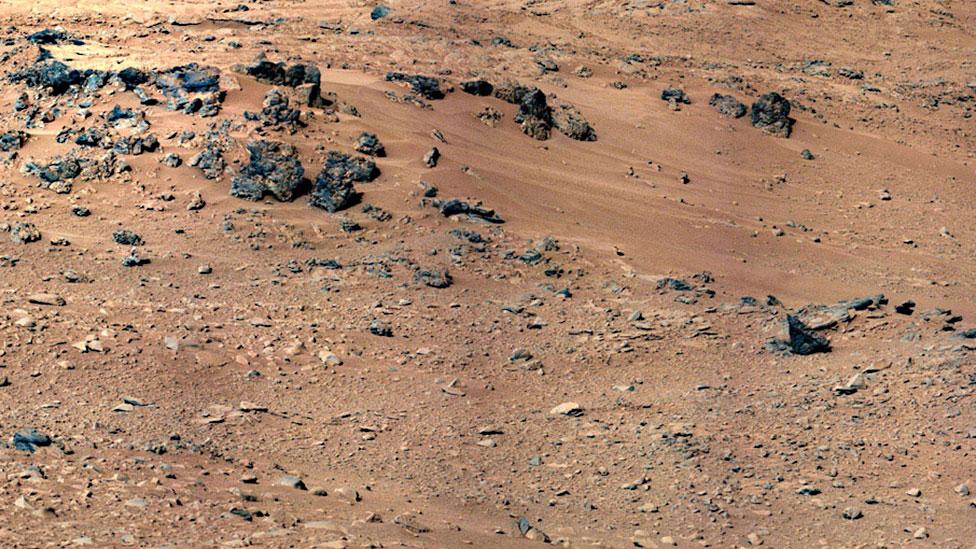 There is, however, a fundamental problem with trying to imbue Mars with a breathable atmosphere. The Earth’s atmosphere is contained within a magnetic bubble, known as the magnetosphere, generated by our magnetic field. Mars has no such field and any atmosphere it once had is likely to have been torn away by the stream of charged particles, or solar wind, blasted out from the Sun.

The past history of the Martian atmosphere is currently being investigated by the Maven mission but, over the decades, any terraformed atmosphere is likely to suffer the same fate.

5. Have children and establish a culture

Assuming their sperm or eggs have not been zapped by cosmic radiation on the way to Mars (something space agencies are already giving serious thought to), then sooner or later a certain percentage of settlers are going to want to have kids. It is, after all, the only way of perpetuating the colony over generations. For it to be successful, the population needs to be large enough to avoid in-breeding over subsequent generations. 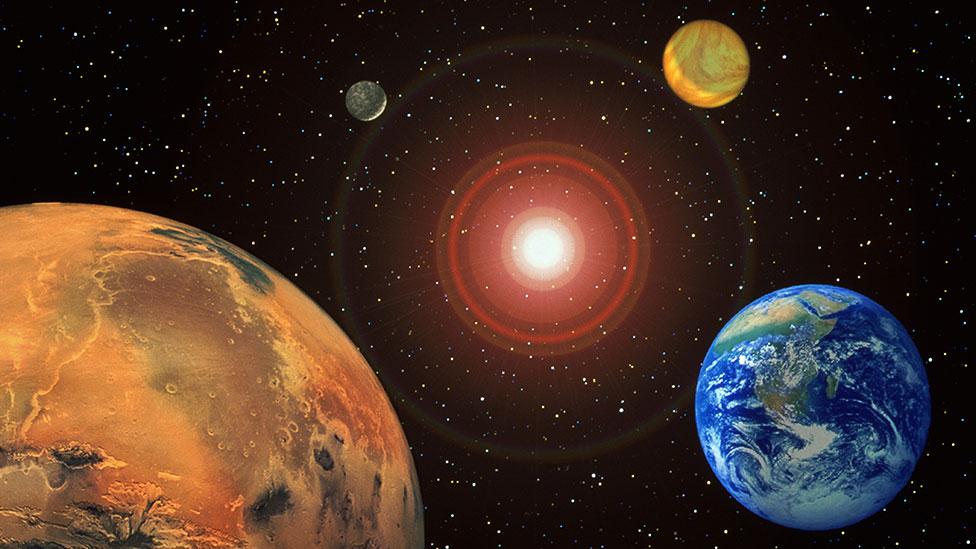 Cameron Smith, an anthropologist at Portland State University in Oregon, has suggested that a population of 2,000 would be sufficient to ensure long-term survival. “If we’re going to have a long-term future in space, it won’t be done by a handful of astronauts, it’ll be whole communities,” he told BBC Future earlier this year.

Smith reckons that over generations a new culture would emerge, as humans become Martians rather than migrants. It’s a view shared by Zubrin. “At some point the Mars base breaks out of becoming a base and becomes an actual village,” he says. “A real society with real people living real lives, with children in schools and community orchestras.”

A child born under the red sky of Mars will have a very different outlook to one born on Earth and may never return to the home world – just as many descendants of European settlers in the US do not have passports.

Every step to establishing human civilisation on Mars is perfectly possible. With a focused effort it is very much doable. One question then remains: do you really want to go? I mean really? Mars is a bleak, cold, airless, rust-stained world. Simply staying alive will be a daily challenge.