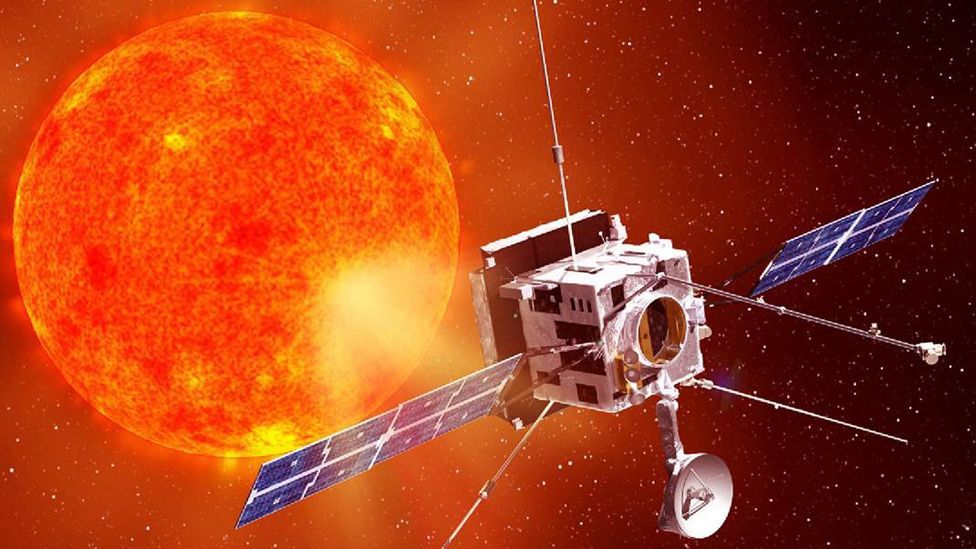 By Richard Hollingham 5th November 2014
A human technology straight from the Stone Age is being adopted for an ambitious 21st Century mission ‒ to study the Sun at close quarters.
W

When I meet him in his office at Airbus Defence and Space in Stevenage, a non-descript industrial town some an hour's drive north of London, Chris Draper is sitting at his desk idly flicking a long narrow strip of what looks like cooking foil. Smooth burnished metal on one side, ridged matt black on the other, the thin material makes a crinkly noise as he twists it back and forth.

Despite first appearances, this is in fact a crucial component for an ambitious science mission to orbit our nearest star. Although, on further discovery, it does turn out to have a connection to dead cooked animals.

“The foil is made out of titanium, so it’d be a bit expensive if you wrapped your roast chicken in it every Sunday,” says Draper, a heatshield engineer. “But the black surface that coats the titanium is made from powdered baked animal bones.” 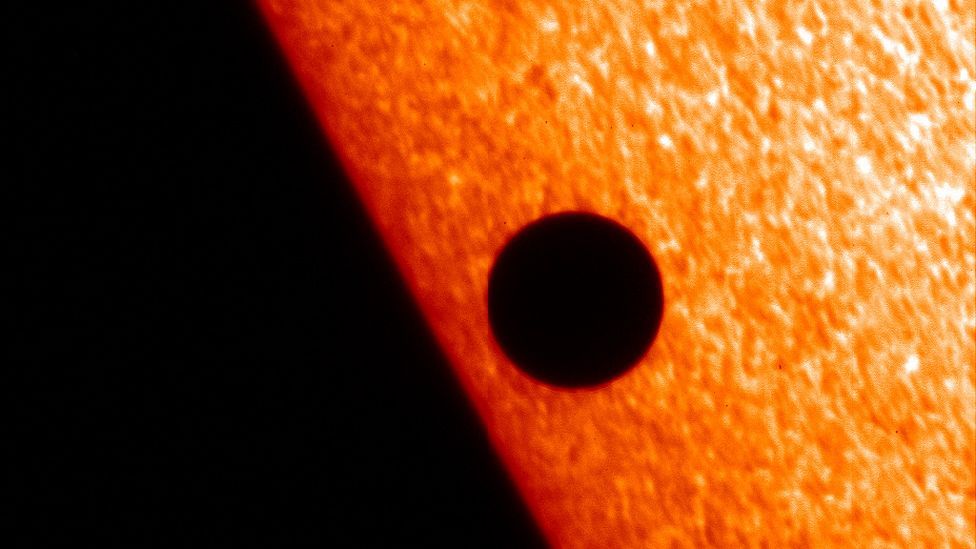 Solar Orbiter's mission will take it within the orbit of Mercury, seen here dwarfed by the Sun (ESA)

Just 1/20th of a millimetre thick, this animal-bone-coated titanium foil will make up the outer section of the heat shield being fitted to the European Space Agency’s (ESA) new Solar Orbiter spacecraft. Slated for launch in 2017, this probe will orbit the Sun at a distance of around 40 million kilometres (25 million miles). That is much closer to our nearest star than any previous mission, and well within the orbit of Mercury.

The spacecraft is being designed to make a detailed study of the Sun and the high-energy particles it blasts across the Solar System. Not only should it give us a better understanding of our nearest star but also the influence it has on the Earth and the vulnerable technology, such as satellites and power systems, we rely on. (Read more about the effects of this space weather in a previous story).

To survive its close encounter, Solar Orbiter will have to cope with temperatures that are greater than 550C on the side observing the Sun and below -200C on the opposite side of the spacecraft, while keeping the electronics, instruments and propulsion system comfortable in between.

“It’s been quite a challenge to do that,” admits Draper. “The heat shield design has been driven primarily by materials – we had to ask what sort of materials do you need to use so the electronics don’t get baked?” 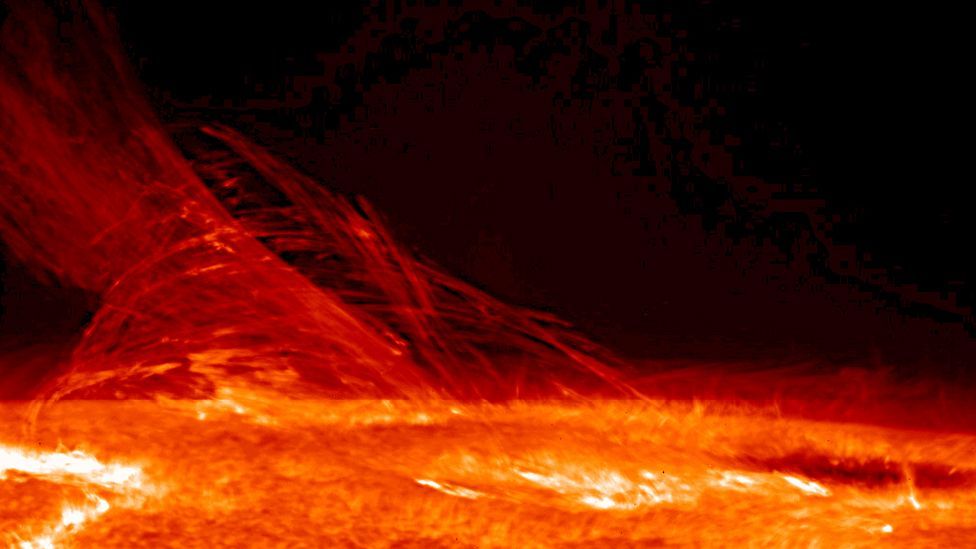 The 3.1m-by-2.4m heatshield also needs to be light enough for a rocket to lift it off the ground, and it should be able to survive at least five years in space bombarded by everything the Sun throws at it. On top of that, the shield has to have apertures in the outer surface, with opening doors, to enable the instruments to see through to the star they are designed to study.

“It’s a trade-off,” says Draper. “The materials we use have to survive the environment but be light enough to be made into a structure that we can actually launch.”

The final heatshield design is made up of a 40cm (16 inch) deep sandwich of between eight and 18 layers (the final number has not yet been finalised) with gaps between them – currently these are filled with air but eventually it will be just the near-nothingness of space. The inner layers have a carbon fibre structure to hold the panel together, the outer ones are made of titanium foil.

The metal was chosen for its strength, flexibility and, crucially, its high melting point of 1,668C. But, given that titanium is also reflective, why go to the trouble of painting it black?

“It’s not obvious why we did that,” admits Draper. “It comes down to thermal properties and the balance between what heat the material absorbs versus how much it emits.” 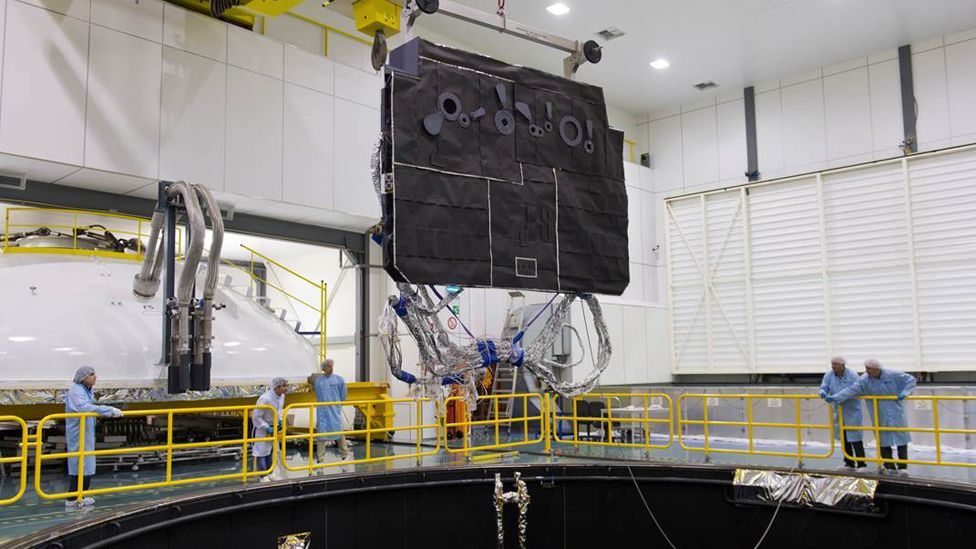 Logic might suggest that when you are flying close to the Sun, a white coating that reflects the Sun’s rays would make most sense. It is, after all, why roofs in desert countries get painted white, to keep homes cool. But there is a downside: a white surface does not give out as much heat as a black surface.

Although many of the inner layers of the heatshield are reflective, the engineers developing the spacecraft calculated that a black outer layer would be the best way of releasing heat to space. Having worked that out, next came the challenge of finding a suitable coating – a paint that stayed the same colour and did not melt, peel or degrade.

The technology they settled on is nothing new. In fact humans have been using burnt and powdered animal bone since the dawn of time for painting pictures on the walls of caves. Even the basic principle is still the same. “Animal bones are incinerated in a furnace and ground down to get this very dark powder, like charcoal,” says Draper. But despite its low-tech origins, it turns out to be one of the most robust coatings around.

However, the next stage is much more sophisticated and was originally developed by Irish company Enbio to provide a safe coating for medical implants. “They use a special nozzle to blast the titanium surface with an abrasive material to strip off the oxide layer,” Draper explains, “and then replace this with the charcoal ink.”

So does the bone-coated titanium work? While the boxy Solar Orbiter spacecraft itself takes shape in one of the Airbus cleanrooms – a white sports-hall sized area packed with space hardware – Draper’s team has been subjecting the heat shield material to a whole range of tests.

“We heat it up to high temperatures, then drop it in liquid nitrogen to see if that has an effect,” says Draper. “We also do an adhesion test where we try to pull the coating off and, as for the doors in the heatshield, we have opened and closed them more than 20,000 times.”

So far all this heating, cooling and scraping has been successful, proving that even in the space age, some Stone Age tricks can still be useful.

* An earlier version of this story had an incorrect distance from the Sun for the orbiter's mission.