Loading
In Depth
Yiwu: The Chinese city where Christmas is made and sold
Share using EmailShare on TwitterShare on FacebookShare on Linkedin 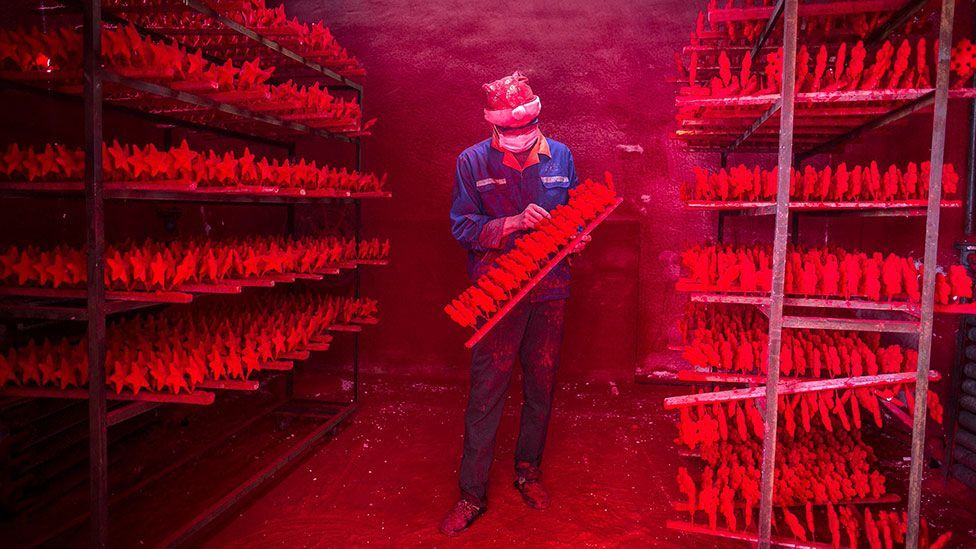 I’m a few hours away from Shanghai and I’ve not seen daylight for over three hours. I’m also hopelessly lost. I’ve been trying to get out of this place for the last 45 minutes, but the vast labyrinth of corridors and stores all look identical. I’m surrounded by artificial trees, baubles, fake snow, felt Santa hats, and animated LED reindeers. All I hear is festive music. I’m trapped in my worst Christmas nightmare, and it is only August. A hot, sticky day in August. For a moment, it feels like I may never escape, doomed to spend the rest of my life in a never-ending Santa’s Grotto.

I’m at the Christmas level of the International Trade Market in Yiwu, around 300 kilometres (187 miles) south of Shanghai. According to Xinhua, the state-run news agency, more than 60% of the world’s Christmas decorations are made in Yiwu, a significant proportion of which is sold at this enormous wholesale market. As I discovered, Christmas is made in Yiwu. That tree lighting up your lounge. Those decorations hanging from the ceiling. That novelty stocking filler you bought for your child. Chances are they came not far from where I am standing.

I’m here with Unknown Fields Division, led by Liam Young and Kate Davies, part of a group of students, writers and film-makers following the global supply chain back to the source of many of our consumer goods. And today, this quest has brought us to what may be the world capital of Christmas tat.

It’s hard to know how to describe Yiwu Market’s scale. I could start with the statistics; how it currently covers an area of four million sq m, with 62,000 booths inside. I could tell you how it is estimated to have an incredible 40,000 visitors every day, 5,000 of whom are said to be buyers from foreign countries. But these are just numbers.

Inside, it looks like a run-down large shopping mall, but you need to start walking to appreciate its size. The complex is divided into five districts, and I first enter through District 1 – straight into a corridor lined with shops exhibiting only pens and pencils. I turn a corner: more pens and pencils. I walk for another 15 minutes. All I see is the same stationery. 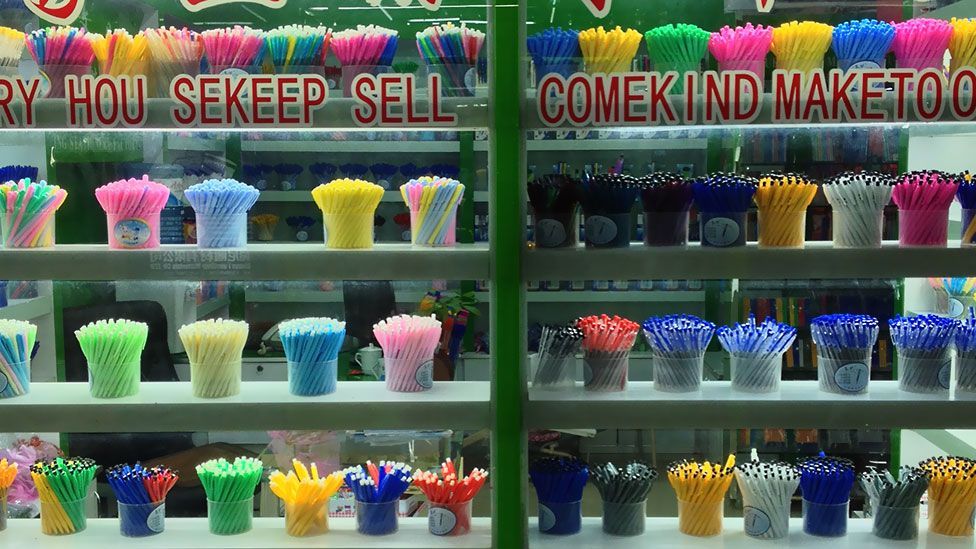 Eventually I reach a broken escalator, changing levels. Pens and pencils give way to countless corridors full of shops selling glasses cases. Another level change and it’s a whole sub-district dedicated to artificial flowers. Liam Young, our trip’s organiser, has been here before and he tells me that on the last visit some of his students set out to walk through all five districts, to visit each product area. Over eight hours later they finally gave up.

It’s not just the size that separates Yiwu market from your local shopping mall. For a start you can’t really buy anything here, at least not in the conventional consumer sense. Yiwu market is, for the large part, strictly wholesale. Each of the 62,000 booths, all identically sized 2.5m by 2.5m cubes, is a showroom for an individual company or factory. The market is less a shopping mall than a vast, endless trade show, built for those most important of middlemen: retail buyers, who flock here from across China and the rest of the world to negotiate deals on shipping containers full of cheap products to fill the shelves of stores back home. The sheer scale of what’s in front of me belies the fact that Yiwu market’s heyday was in the past – much of this trade is now migrating online, to websites such as Alibaba and Made In China. But it still remains the physical manifestation of a vast invisible network that supplies many of the inexpensive goods we all buy in the West and worldwide. 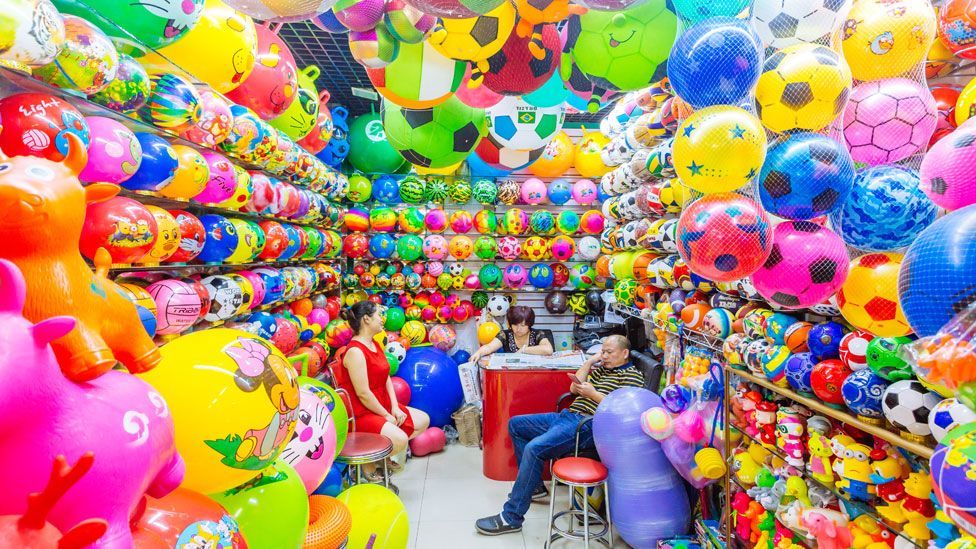 As I walk I note what I see. Buckets and spades. Umbrellas. Models of the Chinese space station. Flashlights with world leaders faces printed on them. Vuvuzelas (yes, they are still being made). A whole district, the size of a large department store, that only sells LED signs, most set to endlessly scroll the phrase “LED signs”. A shop that just sells Sherlock Holmes style magnifying glasses. The list goes on… 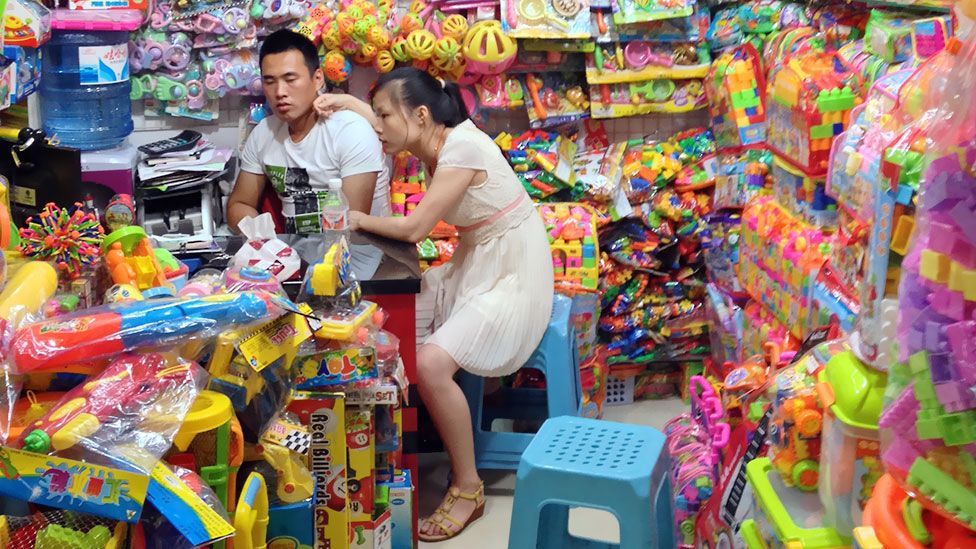 As impossibly varied as these all seem, everything here has something in common. There are no high-value goods here in Yiwu market, and few branded items. You can search all day in the electronics district and you’ll see nothing by Samsung, Apple, or Beats. Instead you’ll see a very large and often overlooked sector of China’s manufacturing output. It’s the little items that fill your desk drawers; the free pens that salesmen give you, and the toys your children break or forget. It’s the hundreds of disposable products that fill pound shops, dollar stores and gas stations. It’s the stuff you buy on impulse, or because it’s momentarily funny. And all because it’s cheap. China is the global leader in creating plastic junk, and Yiwu market is its showroom. 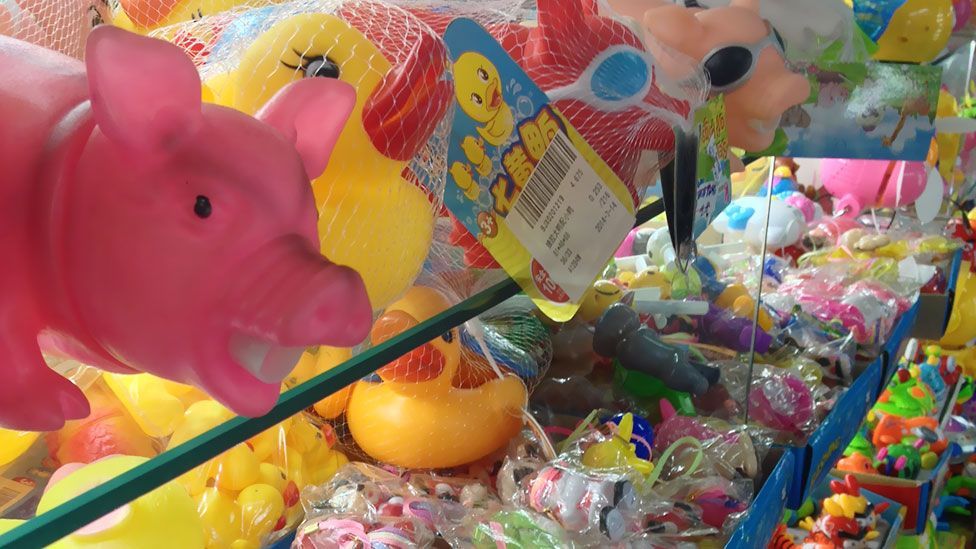 And for that reason, there’s one thing that Yiwu excels at more than anything: Christmas. Forget the North Pole, forget Santa’s workshop. In 2012 Yiwu and the surrounding region had 750 companies making Christmas decorations and other festive items, according to the Yiwu Christmas Products Association.

To see first-hand how Christmas is made in this city of plastic, we decided to visit a nearby factory that sells its wares at the market. So, less than 24 hours after escaping from District 1’s eternal Christmas grotto, I’m in the reception of Yiwu Hangtian Arts and Crafts Co, Ltd, a small company about 30 minutes drive outside the city. It would prove to be the most bewildering and unsettling factory we’d visit in China.

For a start it’s the context; it’s nearly 30C outside, and we’re stood in a slightly shabby industrial building full of instantly familiar Christmas imagery. The first room we’re shown is the main factory floor, where a couple of dozen workers – of all ages and genders, but predominately women under 20 years old – are assembling and painting plastic mistletoe, wreathes, miniature trees and more. 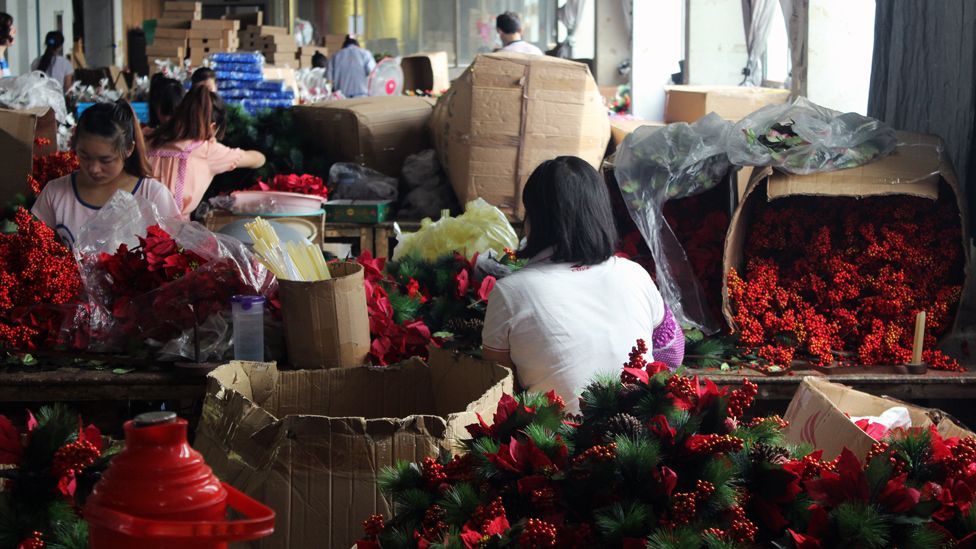 One woman folds elaborate ribbons from plastic sheeting, whilst the woman next to her glues them on to “Merry Christmas” signs covered in red glitter paint. A young boy in a stained apron, who looks to be barely a teenager, is hand-painting holly berries red. And in a side room a man sits in front of a huge fan as he dips metal wires into a bucket of unidentified boiling liquid, bending them while they’re hot into curved headbands for novelty reindeer antlers.

Everywhere the fruits of their labour surround them; thousands of Christmas ornaments and novelties constantly being piled into cardboard boxes and plastic crates faster than they can be moved out, spilling on to the floor and towering above the workers.

In the next room the fabric products are made; again about two dozen women sit at rows of sewing machines. It’s hot and all you can hear is the constant hum of the machines as they stitch together hats, Christmas stockings, and festive bunting (see video, below). The red and white Santa hat – the kind you wear at office parties – that you buy for a few pounds and then throw away by New Year’s Eve. I see it being made here. I watch a girl sew white fur trim on to red felt at the rate of about two hats a minute, and as she finishes each one she simply pushes them off the front of her desk where they fall, silently, onto an ever increasing pile on the floor. 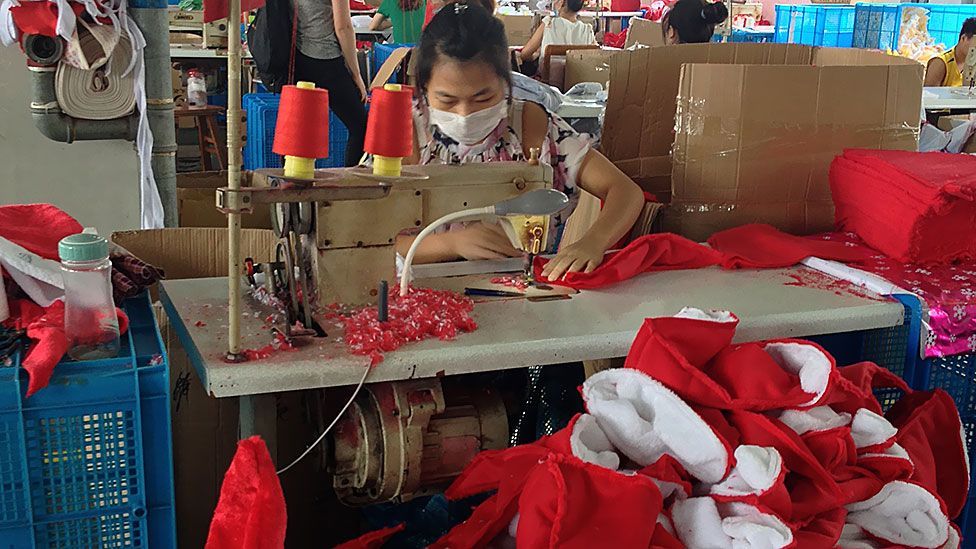 Upstairs is the plastic moulding room, mainly staffed by young men, stripped to the waist because of the heat. The air here is thick with fumes, the smell of chemicals and warm plastic. The men feed plastic pellets from Samsung-branded sacks into machines to be melted down, and then pressed into moulds to make toy snowmen and Father Christmases. It’s repetitive, and potentially dangerous, as the workers must constantly reach inside the large presses. Many of them pass the time while they work watching Chinese TV dramas on their smartphones.

It’s not just seeing Christmas being made in August that’s disorientating, but also the scale of the manual labour that’s involved that surprises me. Perhaps I was naive, but if you’d asked me before I visited Yiwu how Christmas decorations are made I’d have guessed they were mass produced in largely automated factories.

But the truth here is actually the real secret of China’s manufacturing success – keeping labour costs so low that making things by hand is cheaper than using machines. I was never given a definite figure, but I’m told by one of the factory managers that employees here are paid somewhere between $200 and $300 (£130 to £190) a month to work 12-hour-plus shifts, six days a week. It allows small companies like Yiwu Hangtian Arts and Crafts to get started with relatively little investment, while giving them the flexibility to adapt and change what they produce to fit their customers’ needs.

As we leave, we get a glimpse of boxes of Christmas decorations being loaded into a shipping container heading to the mega-port of Ningbo. There it would be transported on a container ship to… who knows where. I’m told that most of the decorations are headed to the US and Europe, with Russia being a new, large, and very lucrative market. Watching Christmas being assembled by hand in front of us that day, I heard more than one person in our group remark that the holiday season will never be the same again. Perhaps they were right. 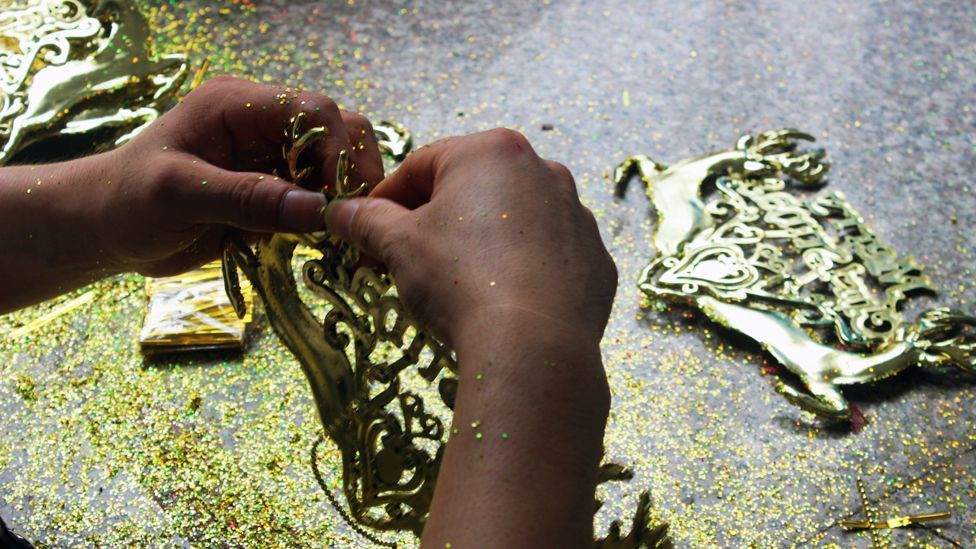 It felt like we’d been given just a small glimpse at China’s vast manufacturing infrastructure. More importantly it felt like we were starting to understand why it existed: so that young workers in a far country can make the rest of the world our disposable, impulse-buy goods. The implications of this, for so many things from climate change to unemployment, were dizzying to comprehend.

We’re told that by the end of September, Christmas manufacturing will have stopped, and the factory will have switched to making Easter and Valentine’s Day gifts and trinkets. After that, it’s Halloween decorations for the lucrative American market. Then, by late spring, it’s Christmas time again. As long as the world wants to celebrate whatever and whenever event it cares to choose, China will be there to be its ultimate party supplier.

In the next instalment in this series, Tim Maughan travels aboard a Maersk container ship, to see first-hand the invisible transport network that supplies the vast majority of consumer goods.

This trip was organised and funded by the Unknown Fields Division, a group of architects, academics and designers at the Architectural Association School of Architecture in London.

Yet another factory in Yiwu crafting decorations and more, ready to be sold at a humungous wholesale market. (Reuters)

Yet another factory in Yiwu crafting decorations and more, ready to be sold at a humungous wholesale market. (Reuters) 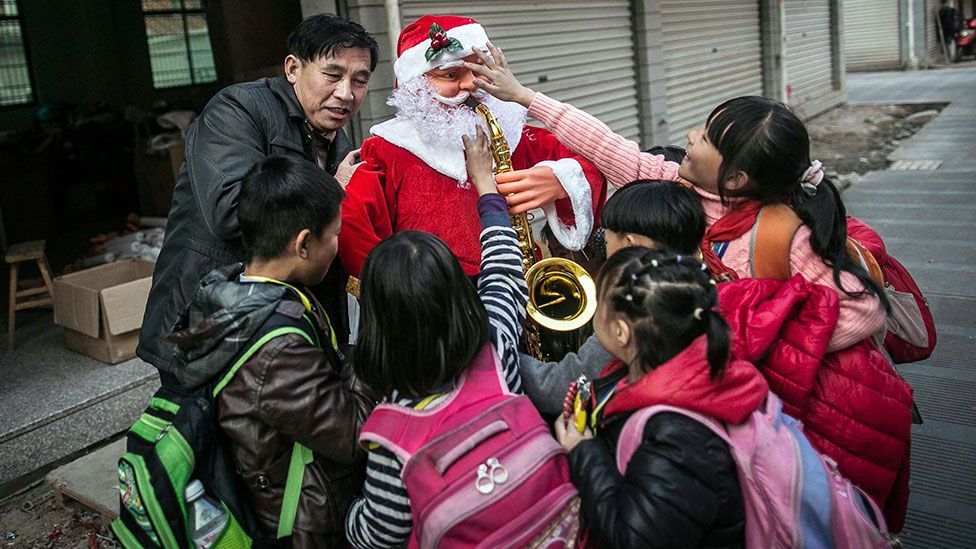 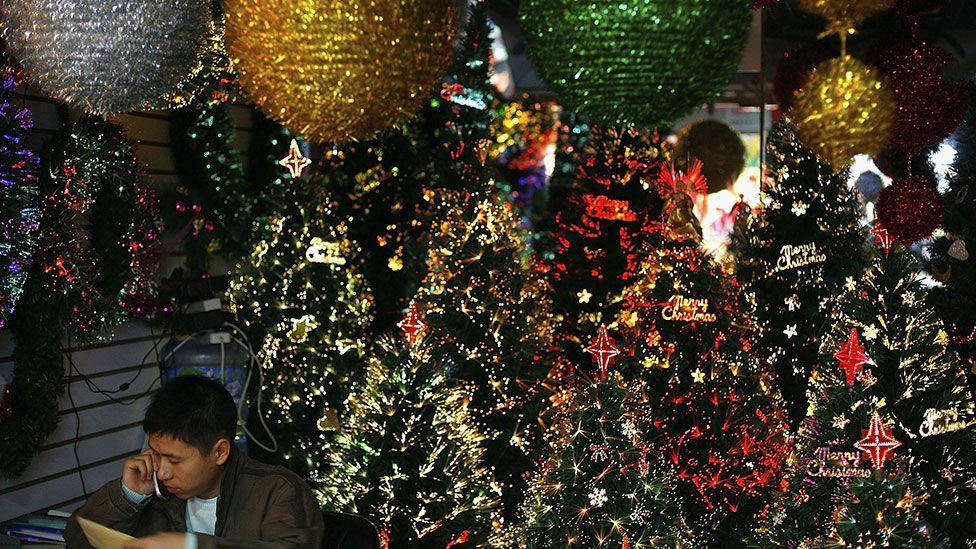 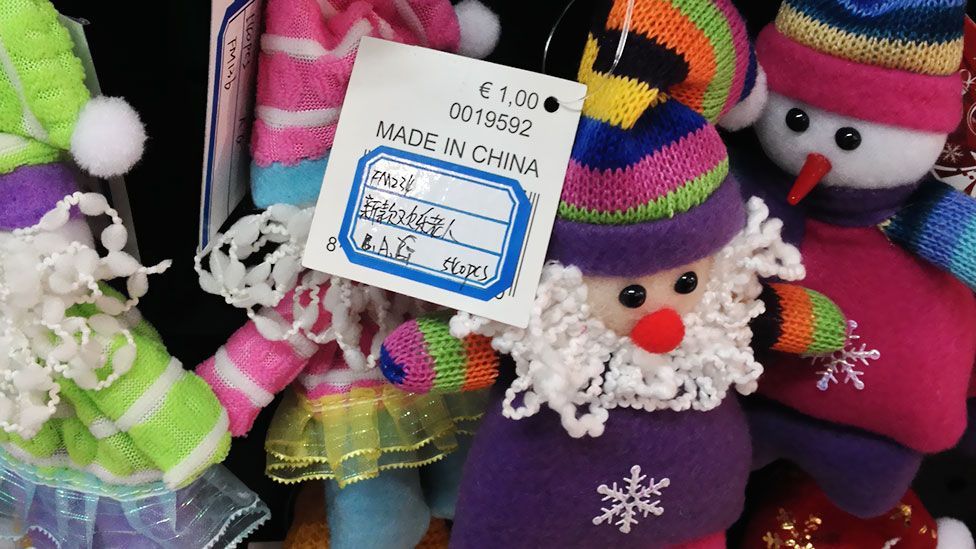 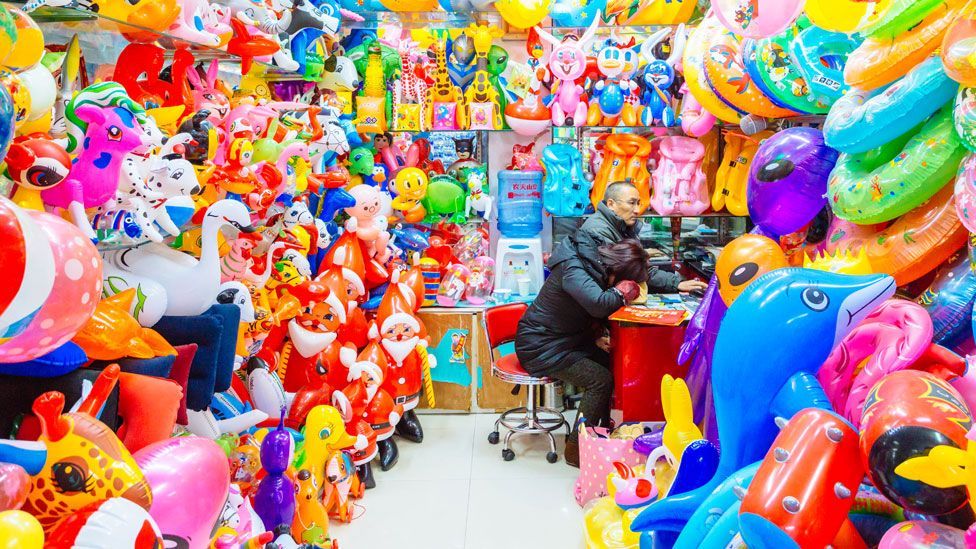 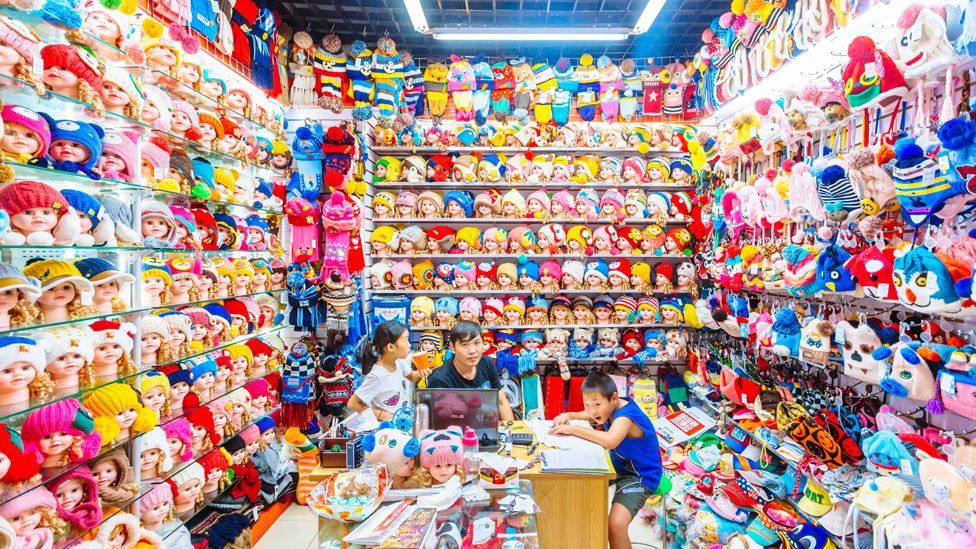 Hats for sale, in all kinds of styles and colours. (Richard Seymour/Unknown Fields Division) 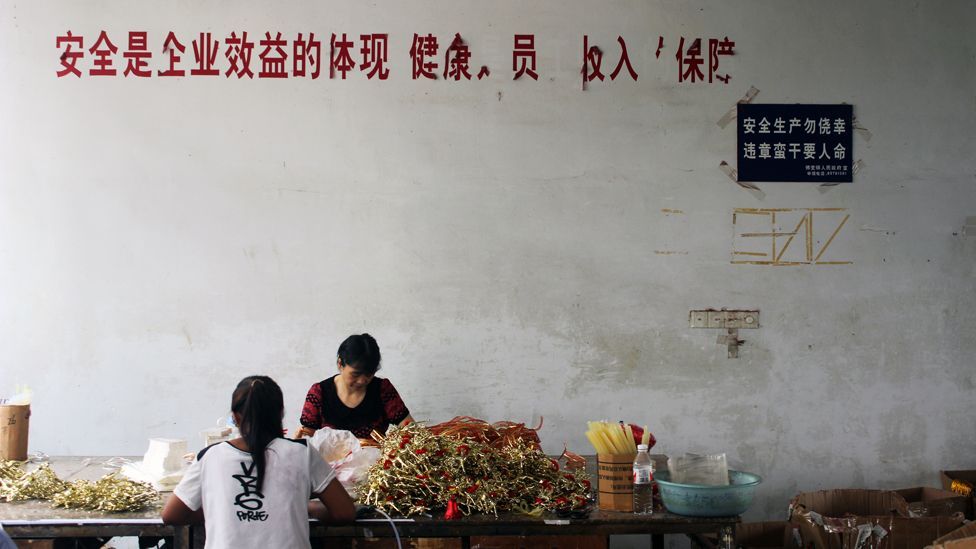 Inside Yiwu Hangtian Arts and Crafts factory, where decorations, festive hats and more are made (Liam Young/Unknown Fields Division) 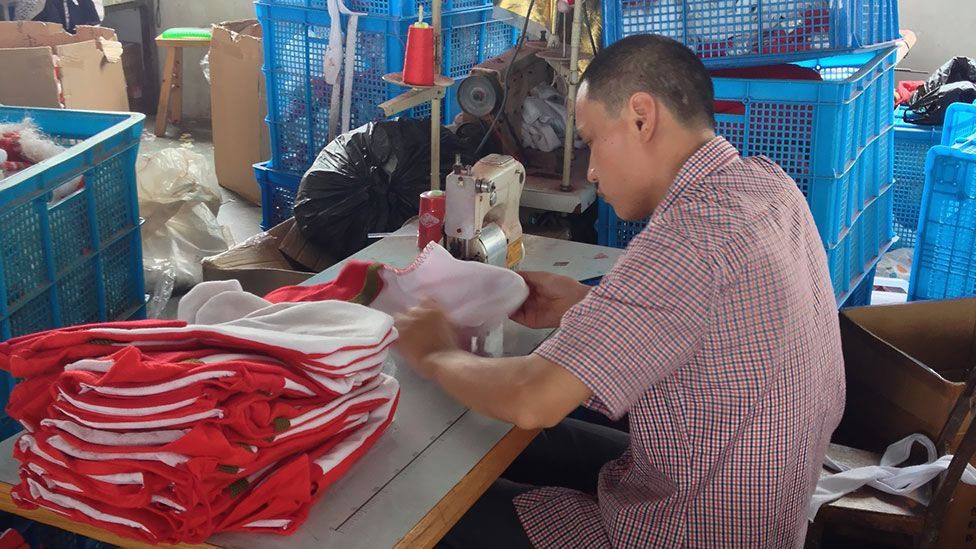 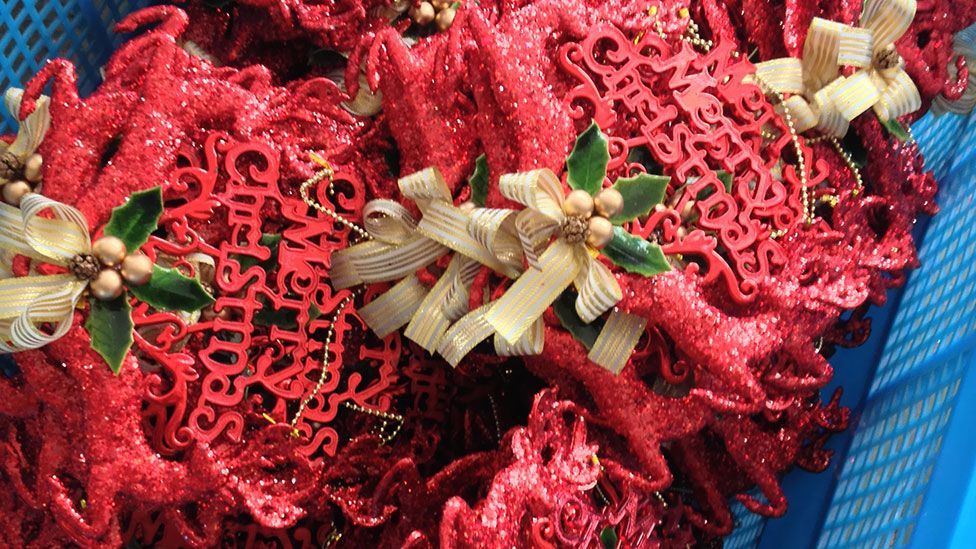 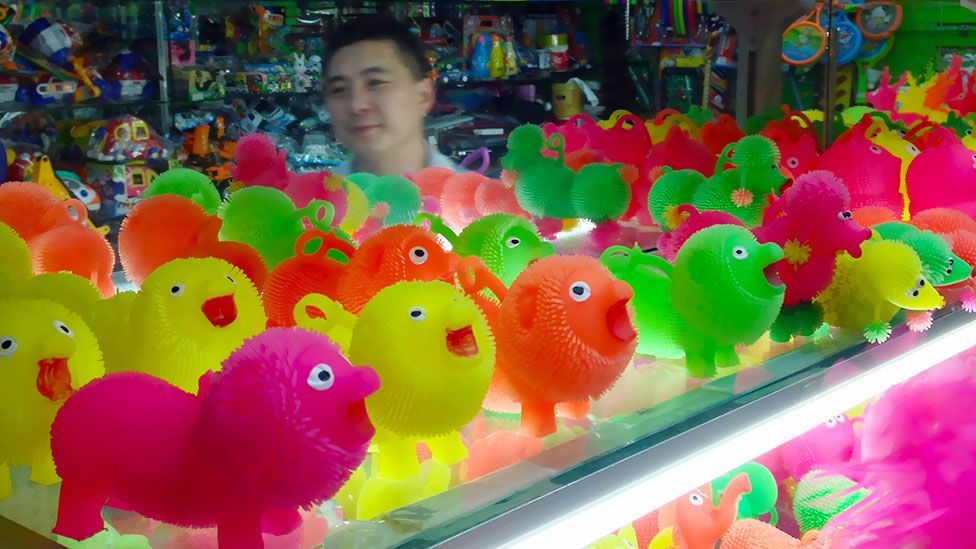 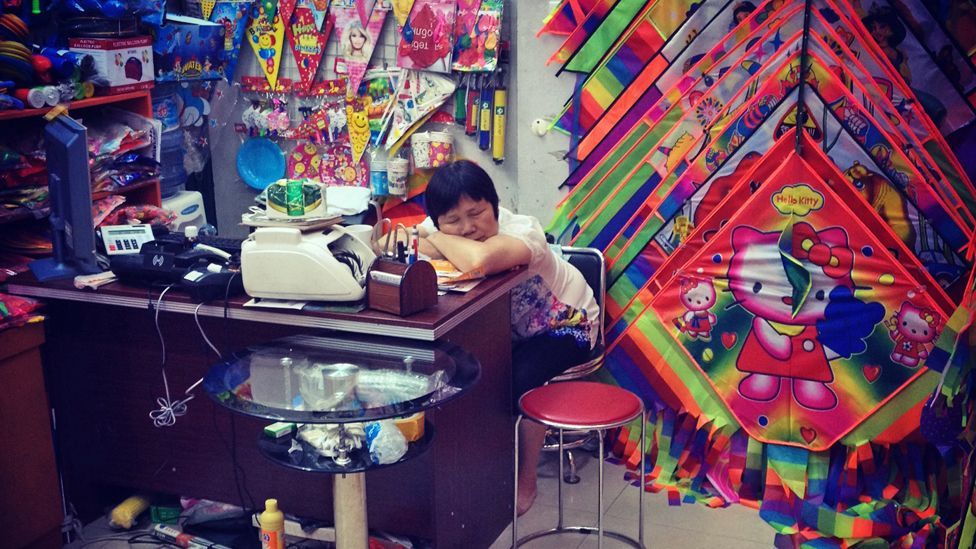 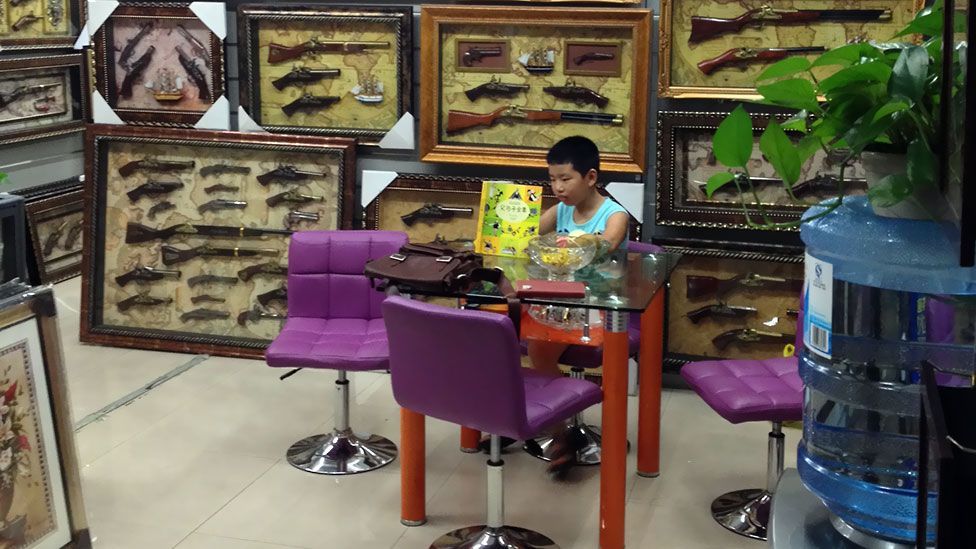 Yiwu market has a store for everything, even imitation guns. (Tim Maughan)