Loading
Medical Myths | Chemistry
Are sweeteners really bad for us?
Share using EmailShare on TwitterShare on FacebookShare on Linkedin 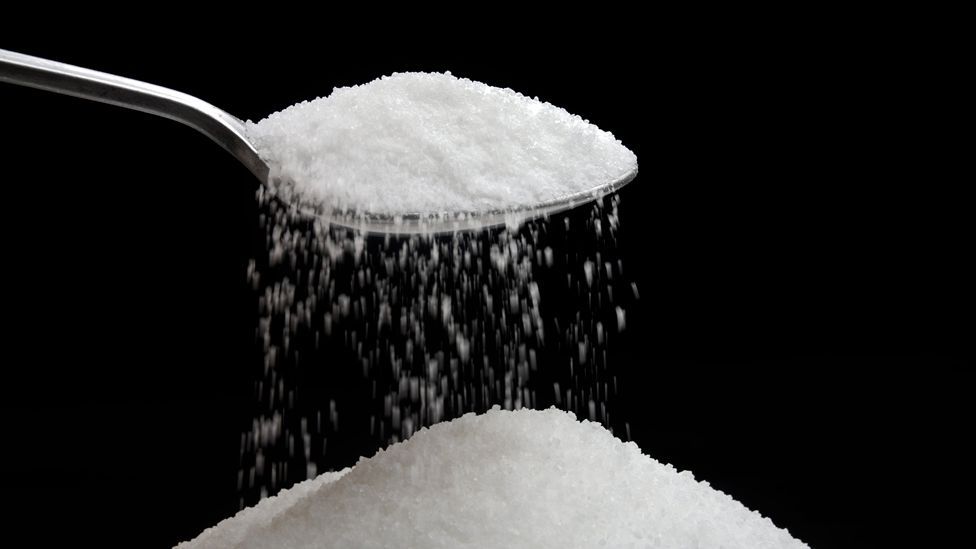 By Claudia Hammond 27th January 2015
The food industry relies on alternatives to sugar for a vast range of diet foods. But are they safe to consume? Claudia Hammond investigates.
M

Many people buy diet drinks and sweeteners in a bid to reduce the amount of sugar they consume. Over the years concerns about their safety have been raised, but how much evidence is there that they’re bad for us?

Aspartame is probably the best-known artificial sweetener and the one that’s had the worst press. It’s an alternative to sugar, created from aspartic acid and phenylalanine. In 1996 a paper suggested that the increase in brain tumours might be linked to a rise in the popularity of aspartame. Fears continued, and other types of cancer began to be mentioned. There was so much concern that a vast study of almost half a million people was conducted by the US National Cancer Institute and published in 2006. It found no increase in the risk of brain cancer, leukaemia or lymphoma in people who consumed aspartame.

Likewise when the European Food Safety Authority conducted the most comprehensive review of the evidence to date, they concluded that at the recommended levels (40mg a day per kilogram of body weight) it was safe, even for children and pregnant women.

The reason it doesn’t seem to have caused problems is that so little aspartame enters our blood system; it’s quickly broken down into by-products. But there is one exception. People with a rare genetic disorder called phenylketonuria or PKU can’t break down phenylalanine, one of aspartame’s by-products ‒ for them, it isn’t safe. This is why sweeteners for people to add at the table or to hot drinks are clearly labelled with a warning that they contain a source of phenylalanine.

Some sweeteners do come with side-effects, however. If you’ve ever eaten too many sugar-free mints containing xylitol then you might have experienced this for yourself. Xylitol is a type of carbohydrate made from birch and other hardwood trees. It contains 30% fewer calories than sugar and doesn’t seem to leave an aftertaste, but if you consume large amounts, it can cause water retention, resulting in diarrhoea. But there is evidence exciting some dentists that it can help prevent tooth decay. Chewing gum or mints sweetened with xylitol has been show to neutralise plaque acidity on the teeth. 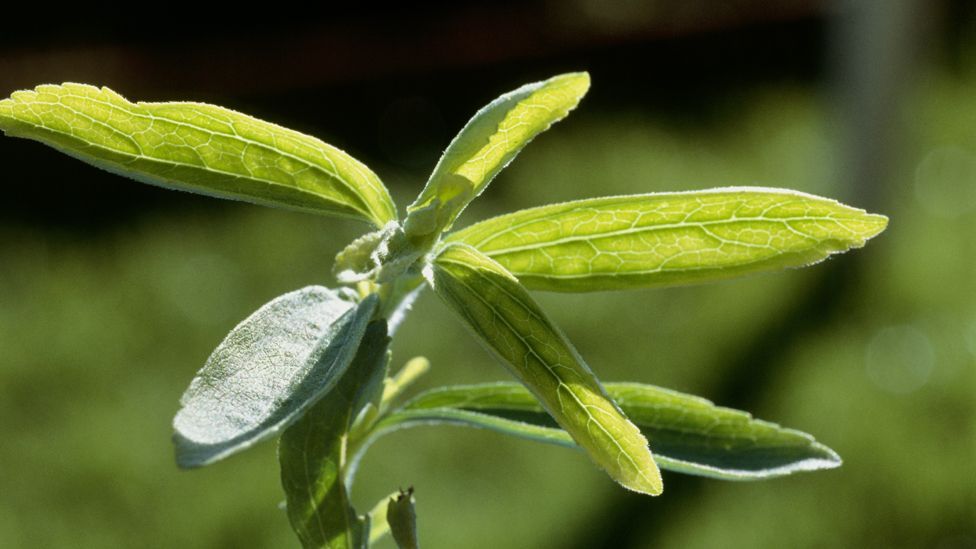 The newest kid on the block is a sweetener that comes from the stevia plant, except that it isn’t really that new. In Paraguay and Brazil stevia has been used medicinally for centuries. It’s calorie-free and 300 times sweeter than sugar. In Japan it’s been sold as a sweetener for more than four decades. Native to tropical and sub-tropical areas of South and Latin America, sweet compounds called steviol glycosides are extracted from the leaves of the plant by steeping them in water. These compounds pass through the body without being absorbed. Stevia was approved at a food additive in the US in 2008 and in Europe in 2011. The downside is that some find it has a bitter aniseed-like aftertaste and for this reason it’s often mixed with artificial sweeteners.

But are steviol glysocides safe? The European Food Safety Authority thinks so after they conducted an analysis of all the available evidence done on both humans and animals in 2010. They concluded these compounds don’t cause cancer, are not toxic and are safe for children and pregnant women.

The great hope is that it helps people to satisfy their sweet tooth without putting on weight or developing diabetes, yet sweeteners have been available for some time and don’t seem to have halted the obesity crisis so far. Scientists still don’t know whether there are consequences when the brain registers the sweet taste, but then doesn’t get the hit of sugar it expects. The worry is that the sweetness might somehow trick the body into releasing too much insulin, something which could lead to weight gain in the long run. It’s not possible to say yet whether this is happening. But the European Food Safety Authority has concluded there’s not enough evidence to say that stevia helps to achieve or maintain a healthy body weight.

Sweeteners don’t seem to deserve their poor reputation, it would appear. But just as it seemed that the evidence was clear, this year some curious new research from Israel was published, suggesting that far from helping to prevent Type 2 diabetes, the artificial sweeteners aspartame, saccharin and sucralose might contribute to it. Healthy mice were given drinking water with one of these three sweeteners added to it. When they measured their blood glucose levels they found that the mice who had consumed sweeteners were showing glucose intolerance, something associated with Type 2 diabetes, while the mice which drank plain water or water containing ordinary sugar didn’t. The reason appeared to lie in the bacteria found in the gut; if they had consumed sweeteners their gut bacteria was changed.

Results from mice can’t always be extrapolated to people and the usual diet of a mouse is of course very different from ours. But for the second part of their study the researchers used humans, feeding them the maximum daily allowance of saccharin, the equivalent of 40 cans of a typical diet drink. Within five days just over half the people showed some intolerance to glucose. Intriguingly those that did had different gut bacteria. 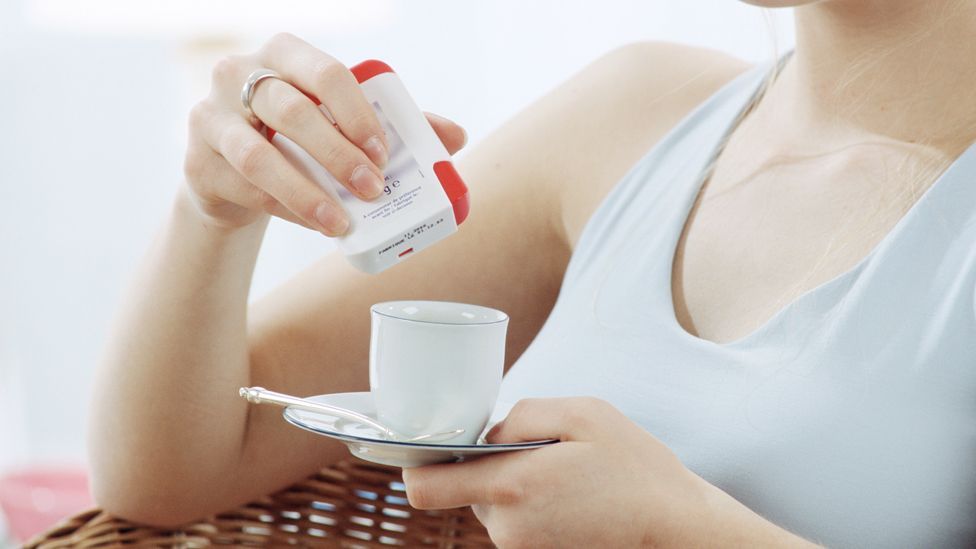 Then the researchers took it a step further, carrying out faecal transplants where faeces are passed from one person or animal to another. In this case they took the faeces from the humans and put them in the mice. The humans with glucose intolerance passed it on to the mice, suggesting these bacteria in the gut are the key. But before we decide that sweeteners are harmful after all, this is just a single study conducted mainly on mice, with just seven humans taking part. Even the researchers concede that more research is needed. This study tells us nothing about the long-term impact of sweeteners in humans.

In 2013 a vast study covering more than 300,000 people in eight European countries found no link between the development of Type 2 diabetes and eating or drinking artificial sweeteners.

There is one lesson from all these studies and that’s that there is no one category of “sweeteners” which are good or bad. Each is very different and needs to be researched and considered separately. Considering all this evidence, it seems to be far too soon to reach for the sugary drinks instead.