Loading
In Depth | Natural disaster
Sinkholes: Can we forecast a catastrophic collapse?
Share using EmailShare on TwitterShare on FacebookShare on Linkedin 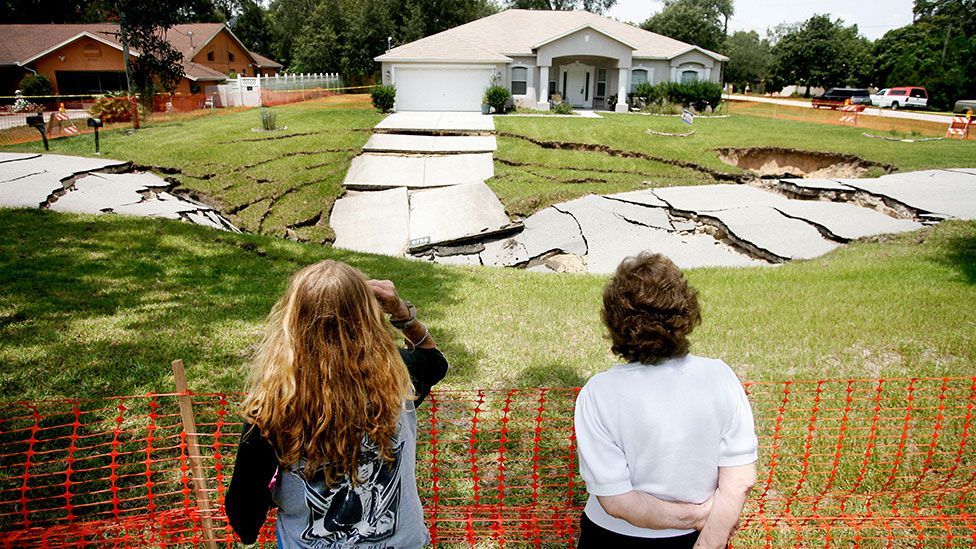 By Daniel Cossins 27th February 2015
Sometimes the ground suddenly opens, swallowing cars, homes and people. We may have ways to see these sinkholes coming – so why would some people resist the idea? Daniel Cossins reports.
I

It’s the stuff of nightmares. Around 11pm on 28 February 2013, in a suburb east of Tampa, Florida, 37-year-old Jeff Bush was asleep in bed when the ground opened up and swallowed him. Hearing an almighty crash, Jeff’s younger brother Jeremy rushed into the bedroom. “Everything was gone,” he told CNN. “My brother’s bed, my brother’s dresser, my brother’s TV. My brother was gone.” Jeremy jumped into the hole in a desperate attempt to find his brother. But as the floor began to collapse further, piling more rubble into the void, a sheriff’s deputy arrived to haul Jeremy to safety. Jeff’s body was never recovered.

The opening that took Jeff Bush was a sinkhole. These sudden events occur across the world – earlier this week, two people in South Korea survived being swallowed by one – but areas like Florida are particularly susceptible because of the local geology. Hundreds appear in the Sunshine State every year.

Should we see these huge holes as unpredictable acts of nature, or could there be a way to see them coming? In future, others might be spared Bush’s fate: geologists are busy identifying areas that are particularly prone to sinkholes, while Nasa scientists have test-driven a system that might even identify when the next catastrophic sinkhole might appear. You might assume that such efforts would have the universal support of local residents – but some claim to have good reason to oppose a sinkhole forecasting service. 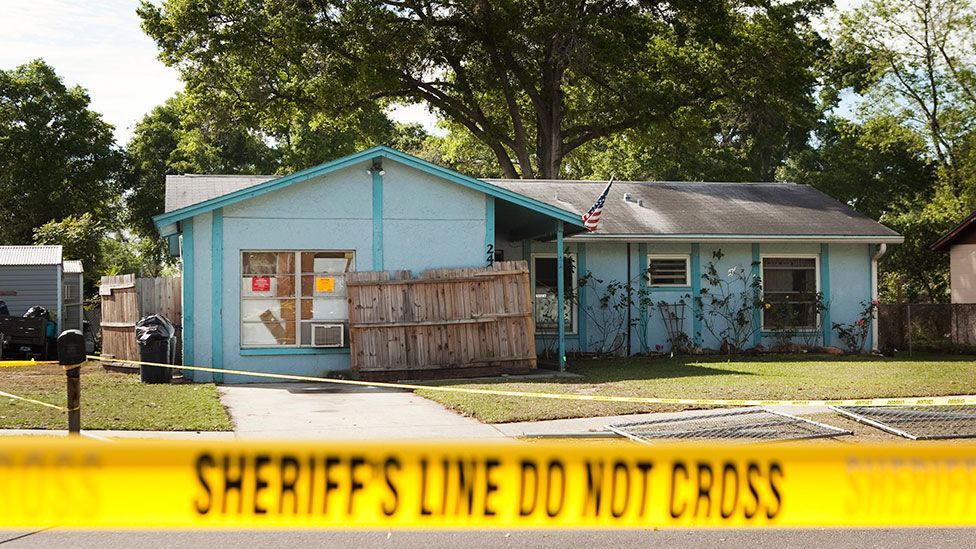 The house where Jeff Bush fell into the Earth (Getty Images)

Read more about the type of sinkhole that killed Jeff Bush (BBC News).

Clint Kromhout, a geologist at the Florida Geological Survey (FGS) in Tallahassee, likes to tell people that there are certain things you can be certain of in Florida: sunshine, beaches, hurricanes – and sinkholes. “Sinkholes are just a fact of life here,” he says.

They form where groundwater dissolves soluble bedrock over hundreds or thousands of years to form underground cavities. Sometimes, when the ceiling of a cavity can no longer support the weight of the overlying sediments, it slowly subsides – or suddenly collapses.

Florida is particularly prone to the events because it lies on a vast limestone slab though which an aquifer percolates, gradually eating away at the bedrock. 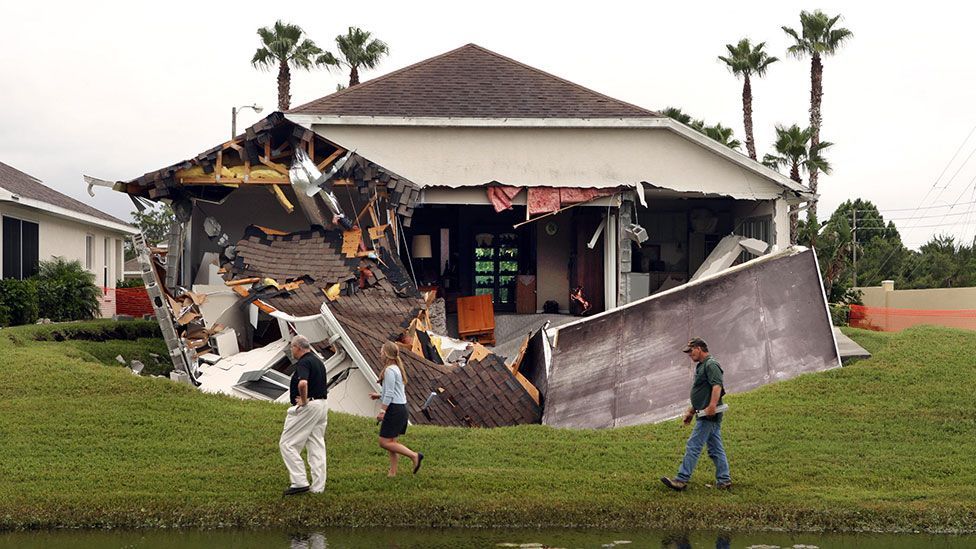 A home in Hudson, Florida destroyed by a 40 foot-wide (12m) sinkhole (Alamy)

Sinkholes are a natural phenomenon but human activity can exacerbate the problem. Excessive pumping of groundwater, for example, can remove support from the walls of a cavity, leading to collapse. Weather is also a factor. Droughts lower the water table while heavy downpours dump tonnes of water, adding to pressure on the ceilings above cavities and often resulting in multiple collapses.

That’s what happened in Florida in June 2012, when Tropical Storm Debby passed through after months of drought, leaving hundreds of sinkholes in its path. The damage was severe enough for the state division of emergency management to ask the FGS to help them prepare for similar scenarios in future.

So in August 2013, Kromhout and his colleague Alan Baker received $1 million to develop a sinkhole vulnerability map. It’s based on a statistical method called ‘weights of evidence’. Basically, that means combining evidence for known sinkhole occurrences with geological data – depth of limestone, for example, or make-up of overlying sediment – to calculate a prediction about the relative vulnerability in a particular location. “We’re out in the field gathering data on a list of geological features,” says Baker. “Then we feed it all into our model, which is validated by testing on existing sinkholes, and it gives us a scientifically defensible outcome.” 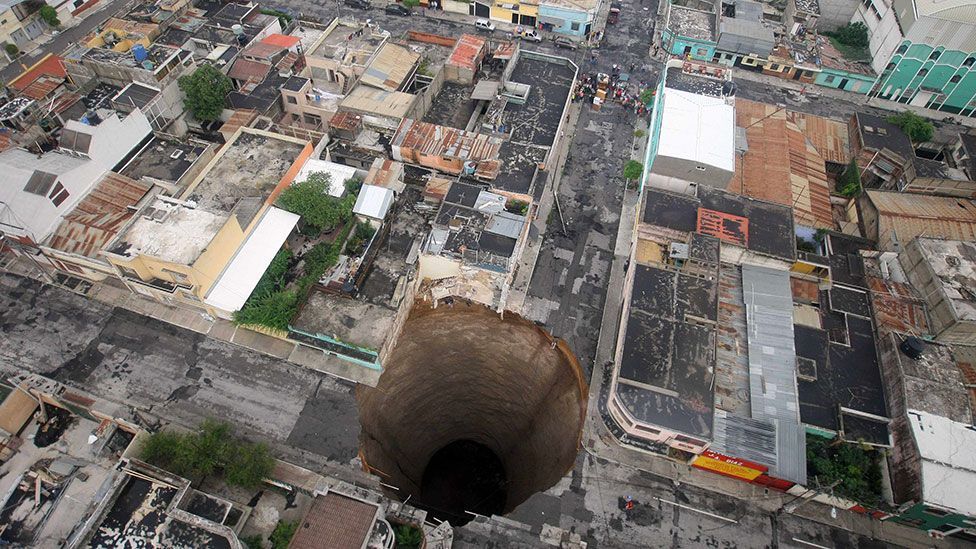 When complete in autumn 2016, the map will show several categories of ‘sinkhole favourability’ in different colours at a scale of roughly 1 square kilometre. That’s not high-resolution enough to tell you there’s likely to be a hole below your house, but it will provide clues to be followed up with ground monitoring.

“The main goal is to help the Department of Emergency Management prepare for the next tropical storm that comes through and creates a whole bunch of sinkholes,” says Kromhout.

Inevitably, though, homeowners across the state will be tempted to use the map to see whether there’s a chance they might be sitting on a sinkhole-waiting-to-happen. And that’s where it might get tricky.

On one level it’s clearly in the homeowner’s interest to learn about a potential problem – particularly given that there are companies that can help. For instance, GeoHazards Inc., in Gainesville, Florida, can fill the void by injecting it with grout – “like a dentist filling a cavity in tooth”, says Anthony Randazzo, emeritus professor of geology at the University of Florida and co-principal at the firm. 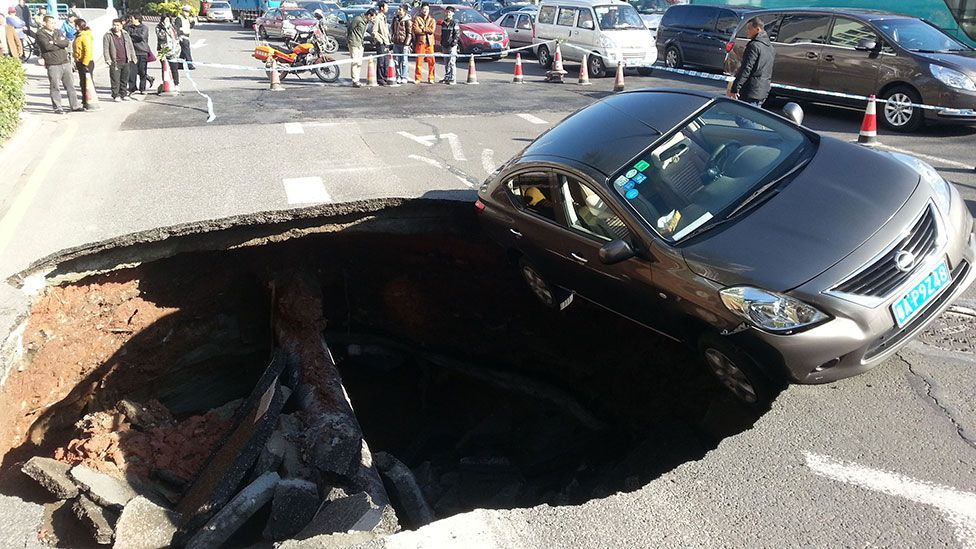 A car teeters on the edge in China (Rex)

But the work is not cheap, often running to tens of thousands of dollars. And even when it’s done, the value of a property can be slashed. In October last year, for example, Ginny Stevens of New Port Richey, Pasco County, told the Tampa Bay Times that despite making all the necessary repairs to her sinkhole-damaged house, its value had plummeted from $350,000 to $125,000.

In Hernando, Pasco, and Hillsborough counties, often referred to as ‘sinkhole alley’, insurance premiums have risen sharply over the past few years. Worse still, a new state law passed in 2011 to crack down on spurious sinkhole claims means that insurance companies are no longer obliged to perform extensive geological testing. Nor do they have to pay out until the damage includes “leaning or buckling” of load-bearing walls and signs that the home is “likely to imminently collapse”. “That’s usually too late,” says Randazzo, “because it gets to the point where the homeowner doesn’t care if the insurance company pays or not; they just want to get out alive.”

Then there are the psychological costs of discovering you might have a sinkhole problem. “If you’re living in one of these houses it’s stressful and anxiety ridden,” says Randazzo. “You hear cracks and nail pops, moaning and creaking. You know the house is not well supported and you start to wonder if it might fall in.” 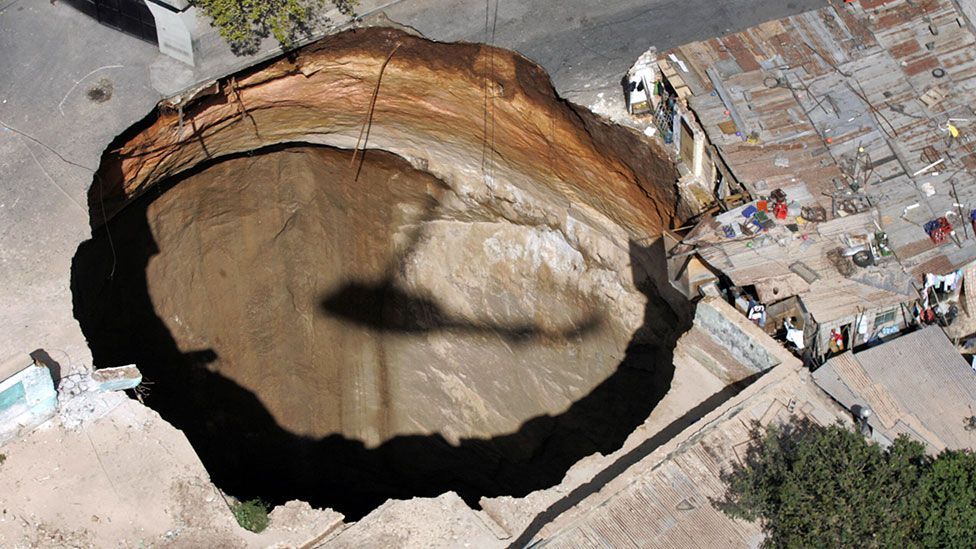 Understandably, then, some Floridians have raised concerns about the sinkhole vulnerability map. What’s more, as Randazzo points out, “if it’s not precise, you might be worrying people unnecessarily.”

Eye in the sky

A better solution might be to spot sinkholes as they develop – and Nasa may have found a way to do so from high above, with Interferometric Synthetic Aperture Radar (InSAR), which detects tiny movements in the ground. For years researchers at Nasa’s Jet Propulsion Laboratory (JPL) in Pasadena, California, have been using InSAR to monitor the coast of Louisiana, which is sinking into the Gulf of Mexico.

When a large sinkhole formed unexpectedly at Bayou Corne in August 2012, swallowing land and prompting hundreds of local residents to leave for good, they went back and analysed radar scans taken in the area before the collapse. They noticed that the ground had moved significantly, shifting horizontally by 10 inches (25cm) towards the centre of where the sinkhole opened, a month before it gave way. Watching out for the same telltale changes in other sinkhole-prone areas could form part of an early-warning system to help residents evacuate before a potentially dangerous collapse.

“Not all sinkholes have surface deformation prior to collapse, so this wouldn’t be a magic bullet,” cautions Ron Blom, principal scientist at JPL and co-author the Bayou Corne study. “But it would certainly be useful as one part of a monitoring system. You could have InSAR data for regions prone to sinkholes and if you happen to see movement, you go to the site and see what’s going on.” 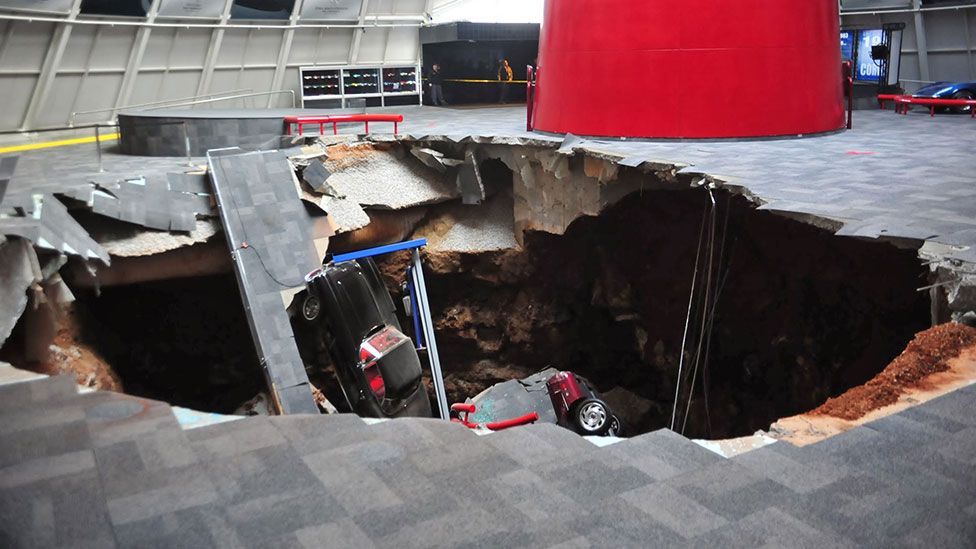 Destruction at the National Corvette Museum in Kentucky (Rex)

Neither Blom or his co-author Cathleen Jones, also at JPL, are aware of any plans to implement such a system in the United States. But Jones gets the impression that authorities are beginning to take the sinkhole problem more seriously. That’s not necessarily because sinkhole formation is becoming more frequent, she says, but because urban sprawl means the holes that do appear are increasingly likely to affect people and property.

And so while there are good reasons why people who already own property in sinkhole-prone areas might be wary of new mapping and prediction plans that could threaten their investment, those thinking of building in these areas will probably be more enthusiastic. “I wonder, for example, if the National Corvette Museum in Kentucky [where a giant sinkhole swallowed eight rare Corvettes in February 2014] would have been built there had they realised there was a large cavity underneath,” says Blom. “That would have been useful information to have.”

You hear cracks and nail pops, moaning and creaking. You start to wonder.

In Depth
1The world’s noisiest spy plane
Last Place on Earth
2The last unmapped places
In Depth
3This article could save your life
The Genius Behind
4Are ‘oceans’ hiding inside Earth?
Around the BBC