Loading
In Depth | Military
How do you dismantle a nuclear submarine?
Share using EmailShare on TwitterShare on FacebookShare on LinkedinShare on Whatsapp 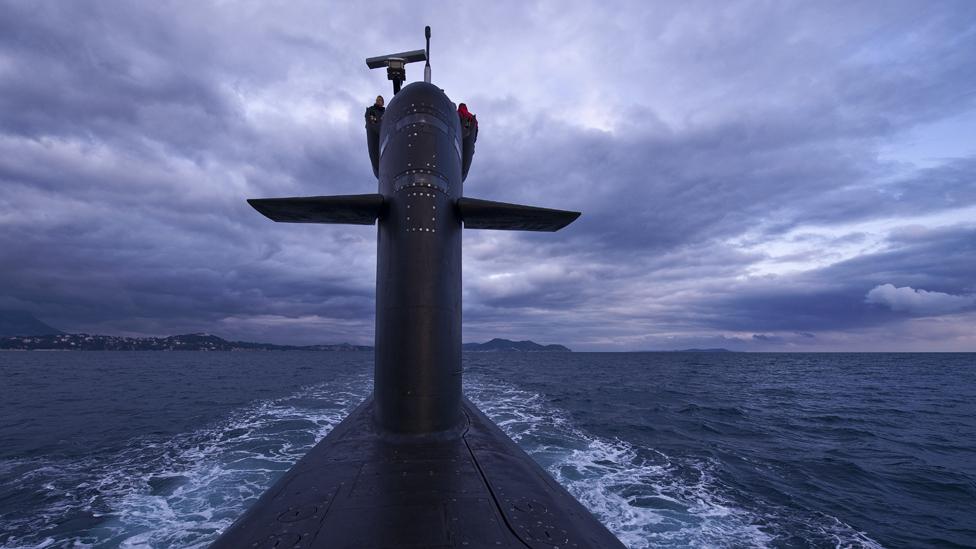 By Paul Marks 30th March 2015
When nuclear-powered submarines reach the end of their lives, dismantling them is a complicated and laborious process. Paul Marks investigates.
N

Nuclear submarines have long been a favourite in popular fiction. From movies such as The Hunt for Red October to long-running TV series like Voyage to the Bottom of the Sea, they have always been portrayed as awesome instruments of geopolitical power gliding quietly through the gloomy deep on secret, serious missions.

But at the end of their useful lives the subs essentially become floating nuclear hazards, fizzing with lethal, spent nuclear fuel that's extremely hard to get out. Nuclear navies have had to go to extraordinary lengths to cope with their bloated and ageing Cold War fleets of hunter-killer and ballistic missile nuclear subs. 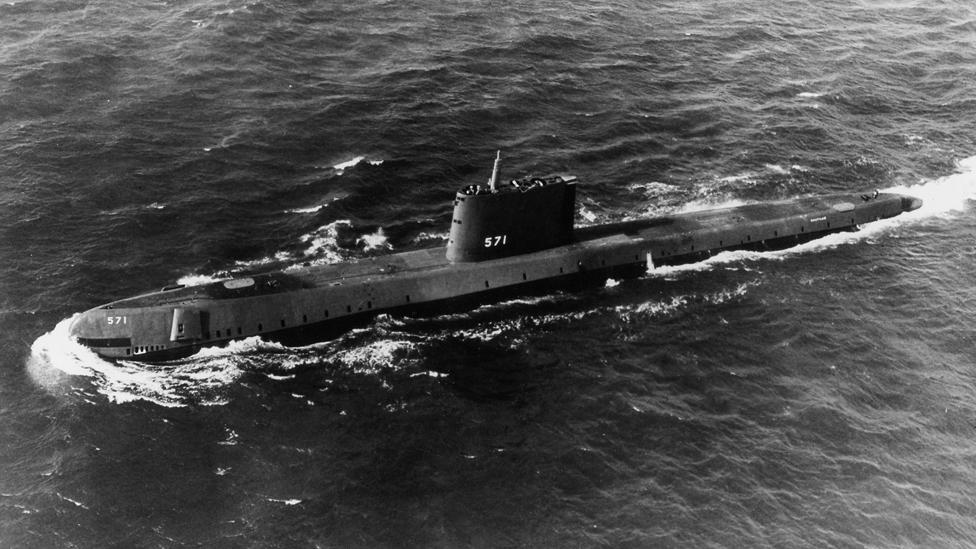 As a result, some of the strangest industrial graveyards on the planet have been created – stretching from the US Pacific Northwest, via the Arctic Circle to Russia’s Pacific Fleet home of Vladivostok.

These submarine cemeteries take many forms. At the filthy end of the spectrum, in the Kara Sea north of Siberia, they are essentially nuclear dumping grounds, with submarine reactors and fuel strewn across the 300m-deep seabed. Here the Russians appear to have continued, until the early 1990s, disposing of their nuclear subs in the same manner as their diesel-powered compatriots: dropping them into the ocean.

The diesel sub scrapyard in the inlets around Olenya Bay in north-west Russia's arctic Kola Peninsula is an arresting sight: rusted-through prows expose torpedo tubes inside, corroded conning towers keel over at bizarre angles and hulls are burst asunder, like mussels smashed on rocks by gulls.

The Soviets turned the Kara Sea into "an aquarium of radioactive junk" says Norway’s Bellona Foundation, an environmental watchdog based in Oslo. The seabed is littered with some 17,000 naval radioactive waste containers, 16 nuclear reactors and five complete nuclear submarines – one has both its reactors still fully fuelled. 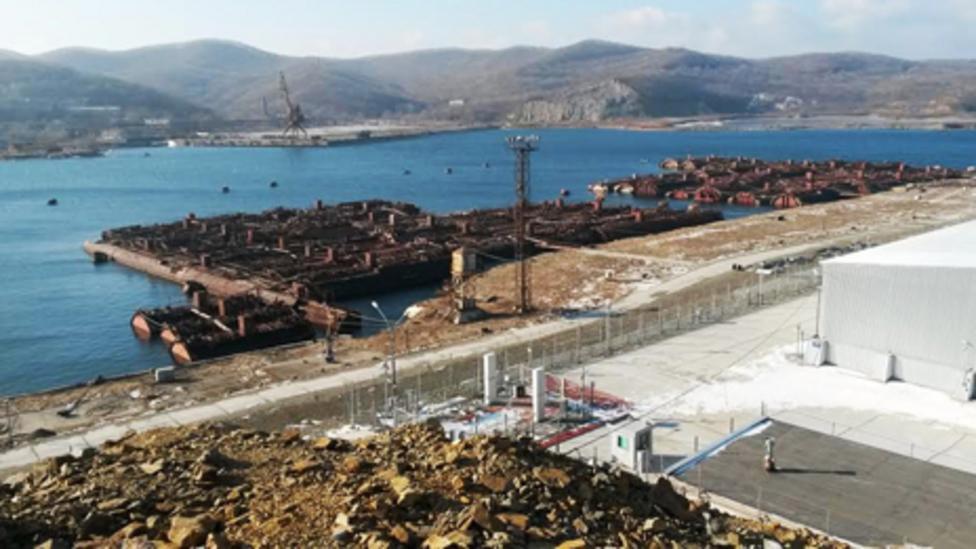 Russian reactors have been stored in the harbour at Vladivostok (Credit: Bellona Foundation)

The Kara Sea area is now a target for oil and gas companies – and accidental drilling into such waste could, in principle, breach reactor containments or fuel rod cladding, and release radionuclides into the fishing grounds, warns Bellona's managing director Nils Bohmer.

Official submarine graveyards are much more visible: you can even see them on Google Maps or Google Earth. Zoom in on America's biggest nuclear waste repository in Hanford, Washington, Sayda Bay in the arctic Kola Peninsula, or the shipyards near Vladivostok and you'll see them. There are row after row of massive steel canisters, each around 12m long. They are lined up in ranks in Hanford's long, earthen pits awaiting a future mass burial, sitting in regimented rows on a Sayda Bay dockside, or floating on the waters of the Sea of Japan, shackled to a pier at the Pavlovks sub base near Vladivostok.

These canisters are all that remain of hundreds of nuclear subs. Known as "three-compartment units" they are the sealed, de-fuelled reactor blocks produced in a decommissioning process perfected at the US Department of Defense's Puget Sound Naval Shipyard in Bremerton, Washington.

It’s a meticulous process. First, the defunct sub is towed to a secure de-fuelling dock where its reactor compartment is drained of all liquids to expose its spent nuclear fuel assemblies. Each assembly is then removed and placed in spent nuclear fuel casks and put on secure trains for disposal at a long-term waste storage and reprocessing plant. In the US, this is the Naval Reactor Facility at the sprawling Idaho National Laboratory, and in Russia the Mayak plutonium production and reprocessing plant in Siberia is the final destination. 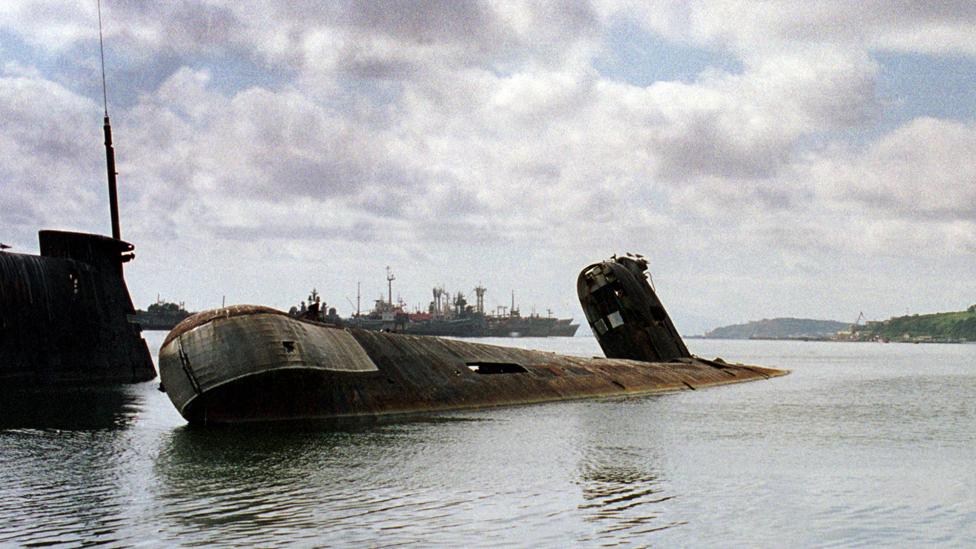 Although the reactor machinery – steam generators, pumps, valves and piping – now contains no enriched uranium, the metals in it are rendered radioactive by decades of neutron bombardment shredding their atoms. So after fuel removal, the sub is towed into dry dock where cutting tools and blowtorches are used to sever the reactor compartment, plus an emptied compartment either side of it, from the submarine's hull. Then thick steel seals are welded to either end. So the canisters are not merely receptacles: they are giant high-pressure steel segments of the nuclear submarine itself – all that remains of it, in fact, as all nonradioactive submarine sections are then recycled.

Russia also uses this technique because the West feared that its less rigorous decommissioning processes risked fissile materials getting into unfriendly hands. At Andreeva Bay, near Sayda, for instance, Russia still stores spent fuel from 90 subs from the 1960s and 1970s, for instance. So in 2002, the G8 nations started a 10-year, $20bn programme to transfer Puget Sound's decommissioning knowhow to the Russian Federation. That involved vastly improving technology and storage at their de-fuelling facility in Severodvinsk and their dismantling facility, and by building a land-based storage dock for the decommissioned reactors.

Safer land-based storage matters because the reactor blocks had been left afloat at Sayda Bay, as the air-filled compartments either side of the reactor compartment provide buoyancy, says Bohmer. But at Pavlovks, near Vladivostok, 54 of the canisters are still afloat and at the mercy of the weather.

Decommissioning this way is not always possible, however, says Bohmer. Some Soviet subs had liquid metal cooled reactors – using a lead-bismuth mixture to remove heat from the core – rather than the common pressurised water reactor (PWR). In a cold, defunct reactor the lead-bismuth coolant freezes, turning it into an unwieldy solid block. Bohmer says two such submarines are not yet decommissioned and have had to be moved to an extremely remote dockyard at Gremikha Bay – also on the Kola Peninsula – for safety's sake. 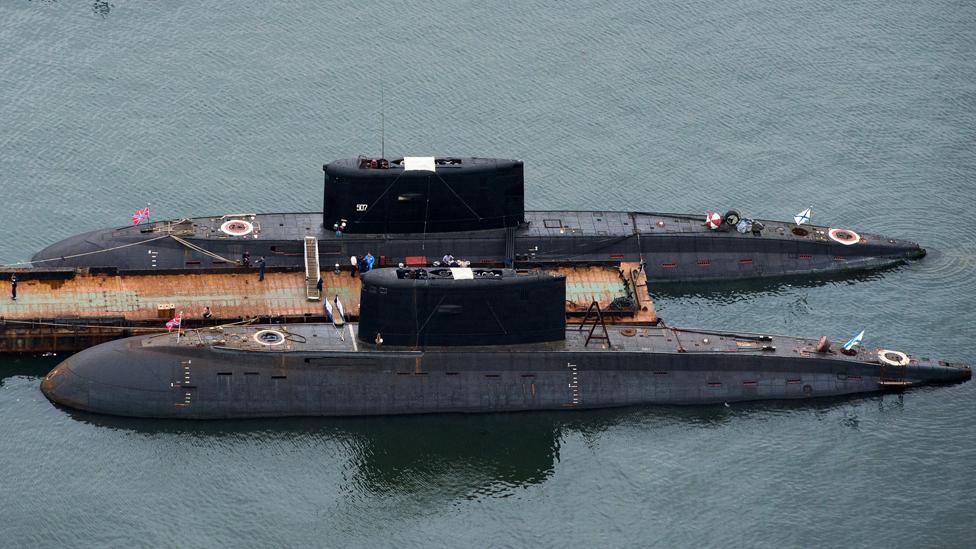 When nuclear submarines reach the end of their lives, some of their hulks remain dangerously radioactive (Credit: Science Photo Library)

Using the three-compartment-unit method, Russia has so far decommissioned 120 nuclear submarines of the Northern Fleet and 75 subs from its Pacific Fleet. In the US, meanwhile, 125 Cold War-era subs have been dismantled this way. France, too, has used the same procedure. In Britain, however, Royal Navy nuclear subs are designed so that the reactor module can be removed without having to sever compartments from the midsection. "The reactor pressure vessel can be removed in one piece, encased, transported and stored," says a spokesman for the UK Ministry of Defence.

However Britain's plans to decommission 12 defunct submarines stored at Devonport in the south of England and seven at Rosyth in Scotland won't happen any time soon as the government still has to decide which of five possible UK sites will eventually store those pressure vessels and spent fuel. This has raised community concerns as the numbers of defunct nuclear-fuelled subs is building up at Devonport and Rosyth, as BBC News reported last year.

Environmental groups have also raised concerns about fuel storage in the US. The Idaho National Lab has been the ultimate destination for all US Navy high-level spent fuel since the first nuclear sub, USS Nautilus, was developed in 1953. "The prototype reactor for the USS Nautilus was tested at INL and since then every scrap of spent fuel from the nuclear navy has ended up in Idaho. It is stored above the upstream end of the Snake River Aquifer, the second largest unified underground body of water on the North American continent," says Beatrice Brailsford of the Snake River Alliance, an environmental lobby group.

"The spent fuel is stored above ground, but the rest of the waste is buried above the aquifer and that practice may continue for another half century. It is a source of concern for many people in Idaho." It's not only the aquifer's fresh water that's at risk: the state’s signature crop, potatoes, would also be affected. 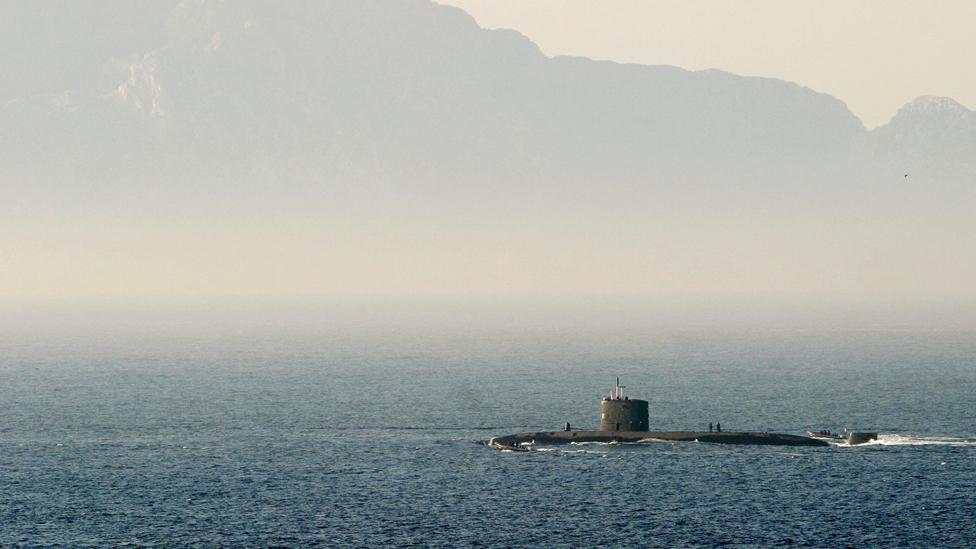 Even with high security, radioactive material can occasionally escape – sometimes in bizarre ways. For instance both INL and Hanford have suffered unusual radiation leaks from tumbleweeds blowing into waste cooling ponds, picking up contaminated water, and then being blown over the facility's perimeter by the wind.

The expensive, long-term measures that have to be taken to render a defunct nuclear sub safe don’t seem to deter military planners from building more vessels. "As far as the US is concerned there is no indication that the Navy believes nuclear submarines have been anything less than a stellar success and replacements for the major submarine classes are in the works." says Edwin Lyman, nuclear policy analyst at the Union of Concerned Scientists, a pressure group, in Cambridge, Massachusetts. 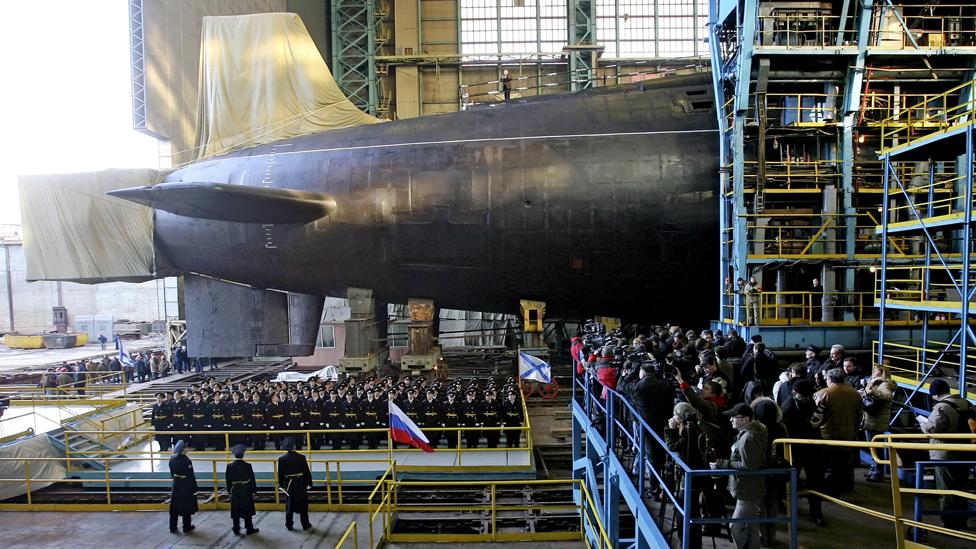 The US is not alone: Russia has four new nuclear subs under construction at Severodvinsk and may build a further eight before 2020. "Despite limited budgets Russia is committed to building up its nuclear fleet again," says Bohmer. China is doing likewise.

The submarine graveyards and spent fuel stores, it appears, will continue to be busy. 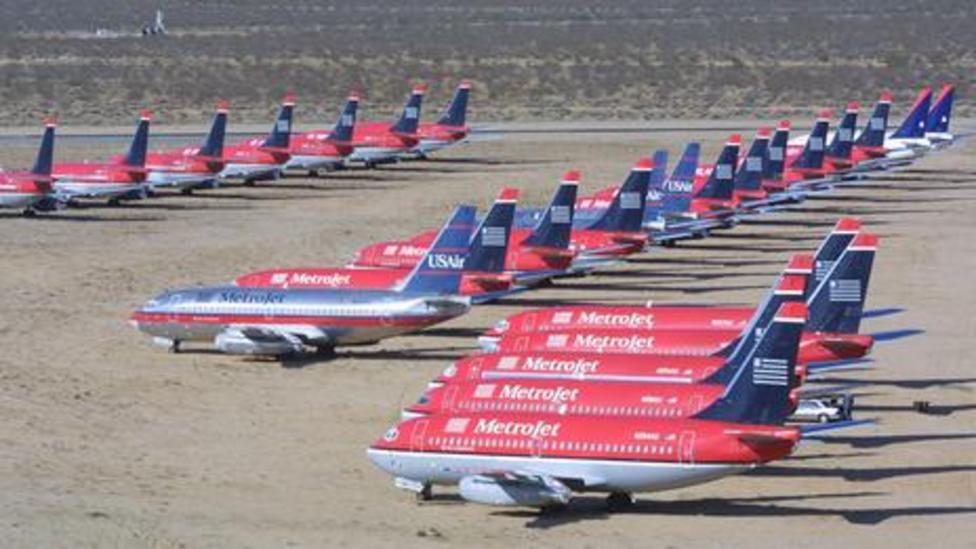 Secrets of the desert aircraft boneyards