Hidden in an unknown corner of Inner Mongolia is a toxic, nightmarish lake created by our thirst for smartphones, consumer gadgets and green tech, discovers Tim Maughan.

From where I'm standing, the city-sized Baogang Steel and Rare Earth complex dominates the horizon, its endless cooling towers and chimneys reaching up into grey, washed-out sky. Between it and me, stretching into the distance, lies an artificial lake filled with a black, barely-liquid, toxic sludge.

Dozens of pipes line the shore, churning out a torrent of thick, black, chemical waste from the refineries that surround the lake. The smell of sulphur and the roar of the pipes invades my senses. It feels like hell on Earth.

Welcome to Baotou, the largest industrial city in Inner Mongolia. I'm here with a group of architects and designers called the Unknown Fields Division, and this is the final stop on a three-week-long journey up the global supply chain, tracing back the route consumer goods take from China to our shops and homes, via container ships and factories.

You may not have heard of Baotou, but the mines and factories here help to keep our modern lives ticking. It is one of the world’s biggest suppliers of “rare earth” minerals. These elements can be found in everything from magnets in wind turbines and electric car motors, to the electronic guts of smartphones and flatscreen TVs. In 2009 China produced 95% of the world's supply of these elements, and it's estimated that the Bayan Obo mines just north of Baotou contain 70% of the world's reserves. But, as we would discover, at what cost?

Rare earth minerals have played a key role in the transformation and explosive growth of China's world-beating economy over the last few decades. It's clear from visiting Baotou that it's had a huge, transformative impact on the city too. As the centre of this 21st Century gold-rush, Baotou feels very much like a frontier town. 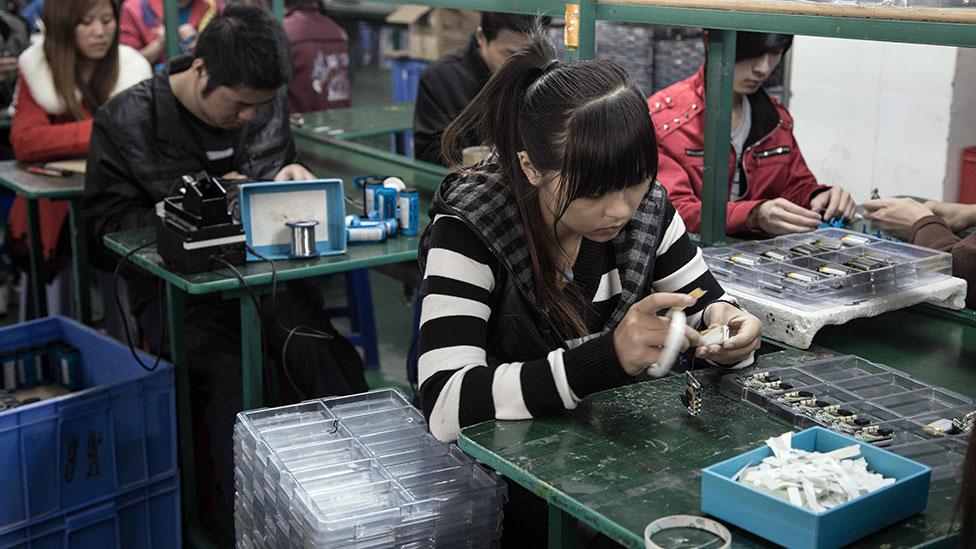 In 1950, before rare earth mining started in earnest, the city had a population of 97,000. Today, the population is more than two-and-a-half million. There is only one reason for this huge influx of people - minerals. As a result Baotou often feels stuck somewhere between a brave new world of opportunity presented by the global capitalism that depends on it, and the fading memories of Communism that still line its Soviet era boulevards. Billboards for expensive American brands stand next to revolution-era propaganda murals, as the disinterested faces of Western supermodels gaze down on statues of Chairman Mao. At night, multicoloured lights, glass-dyed by rare earth elements, line the larger roads, turning the city into a scene from the movie Tron, while the smaller side streets are filled with drunk, vomiting refinery workers that spill from bars and barbecue joints.

Even before getting to the toxic lake, the environmental impact the rare earth industry has had on the city is painfully clear. At times it’s impossible to tell where the vast structure of the Baogang refineries complex ends and the city begins. Massive pipes erupt from the ground and run along roadways and sidewalks, arching into the air to cross roads like bridges. The streets here are wide, built to accommodate the constant stream of huge diesel-belching coal trucks that dwarf all other traffic. 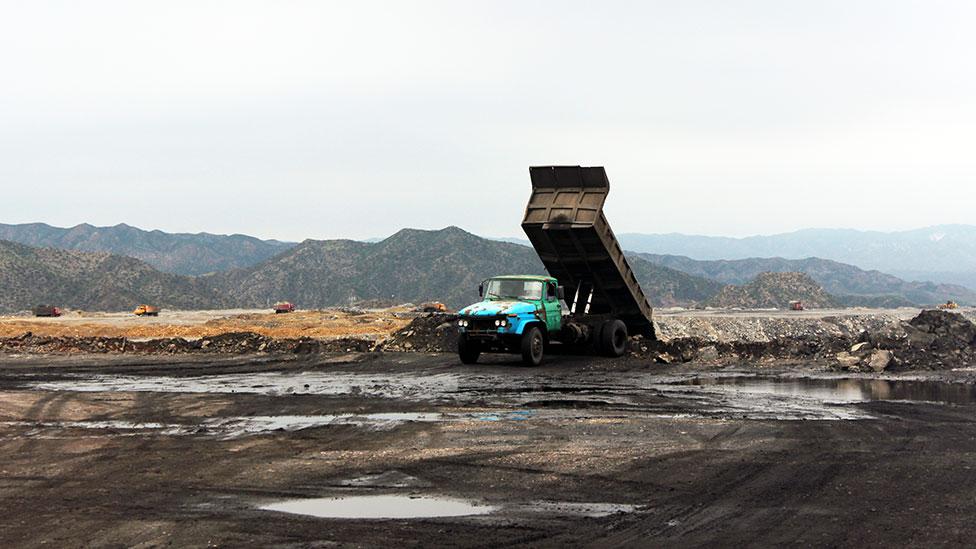 A coal mine in Baotou (Credit: Liam Young/Unknown Fields)

After it rains they plough, unstoppable, through roads flooded with water turned black by coal dust. They line up by the sides of the road, queuing to turn into one of Baotou’s many coal-burning power stations that sit unsettlingly close to freshly built apartment towers. Everywhere you look, between the half-completed tower blocks and hastily thrown up multi-storey parking lots, is a forest of flame-tipped refinery towers and endless electricity pylons. The air is filled with a constant, ambient, smell of sulphur. It’s the kind of industrial landscape that America and Europe has largely forgotten – at one time parts of Detroit or Sheffield must have looked and smelled like this.

One of our first visits in the city is to a processing plant that specialises mainly in producing cerium, one of the most abundant rare earth minerals. Cerium has a huge number of commercial applications, from colouring glass to making catalytic converters. The guide who shows us around the plant explains that they mainly produce cerium oxide, used to polish touchscreens on smartphones and tablets. 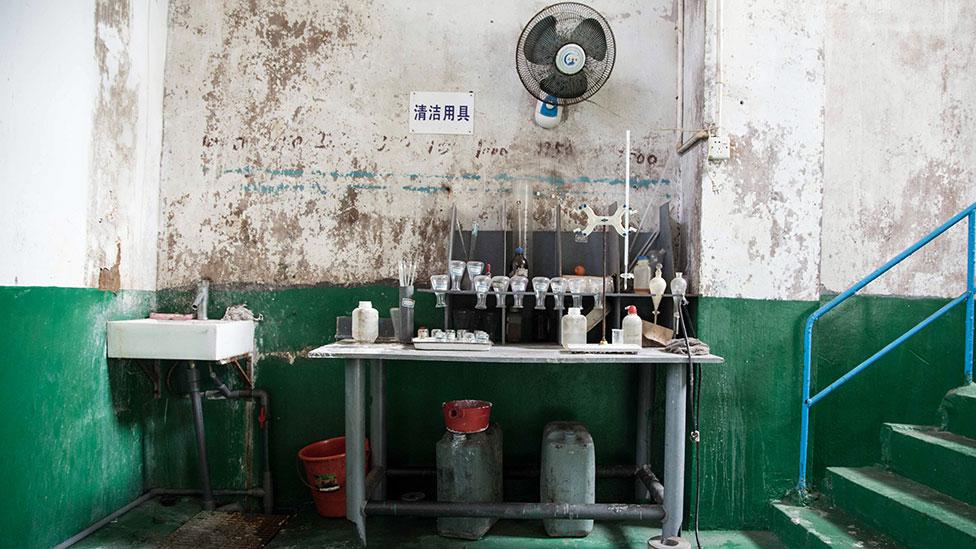 As we are wandering through the factory’s hangar-like rooms, it’s impossible not to notice that something is missing. Amongst the mazes of pipes, tanks, and centrifuges, there are no people. In fact there’s no activity at all. Apart from our voices, which echo through the huge sheds, the plant is silent. It’s very obviously not operating. When asked, our guide tells us the plant is closed for maintenance – but there’s no sign of that either: no maintenance crews, no cleaning or repairs being done. When pushed further our guide gets suspicious, wonders why we are asking so many questions, and clams up. It’s a behaviour we’ll encounter a lot in Baotou – a refusal to answer questions or stray off a strictly worded script.

As we leave, one of our party who has visited the area before suggests a possible explanation: could local industry be artificially controlling market scarcity of products like cerium oxide, in order to keep rare earth prices high? We can’t know for sure that this was the case the day we visited. Yet it would not be unprecedented: in 2012, for example, the news agency Xinhua reported that China’s largest rare earth producer was suspending operations to prevent price drops.

One of Baotou’s other main exports is neodymium, another rare earth with a variety of applications. Again it is used to dye glass, especially for making lasers, but perhaps its most important use is in making powerful yet lightweight magnets. Neodymium magnets are used in consumer electronics items such as in-ear headphones, cellphone microphones, and computer hard-drives. At the other end of the scale they are a vital component in large equipment that requires powerful magnetic fields, such as wind farm turbines and the motors that power the new generation of electric cars. We’re shown around a neodymium magnet factory by a guide who seems more open than our friend at the cerium plant. We’re even given some magnets to play with. But again, when our questions stray too far from applications and to production and associated environmental costs, the answers are less forthcoming, and pretty soon the visit is over. 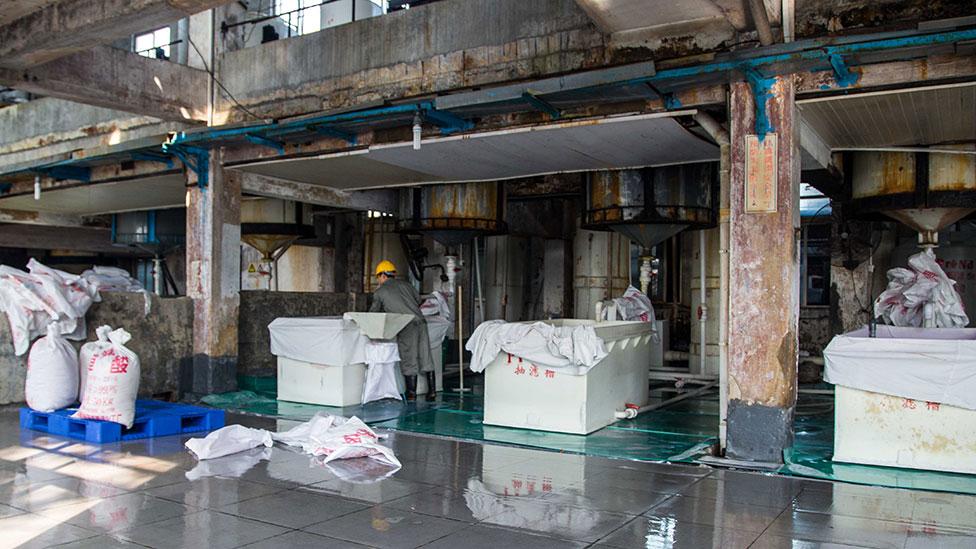 The refinement of rare earth minerals, like that done in this factory, can cause toxic byproducts (Credit: Kate Davies/Unknown Fields)

The intriguing thing about both neodymium and cerium is that while they’re called rare earth minerals, they're actually fairly common. Neodymium is no rarer than copper or nickel and quite evenly distributed throughout the world’s crust. While China produces 90% of the global market’s neodymium, only 30% of the world’s deposits are located there. Arguably, what makes it, and cerium, scarce enough to be profitable are the hugely hazardous and toxic process needed to extract them from ore and to refine them into usable products. For example, cerium is extracted by crushing mineral mixtures and dissolving them in sulphuric and nitric acid, and this has to be done on a huge industrial scale, resulting in a vast amount of poisonous waste as a byproduct. It could be argued that China’s dominance of the rare earth market is less about geology and far more about the country’s willingness to take an environmental hit that other nations shy away from. 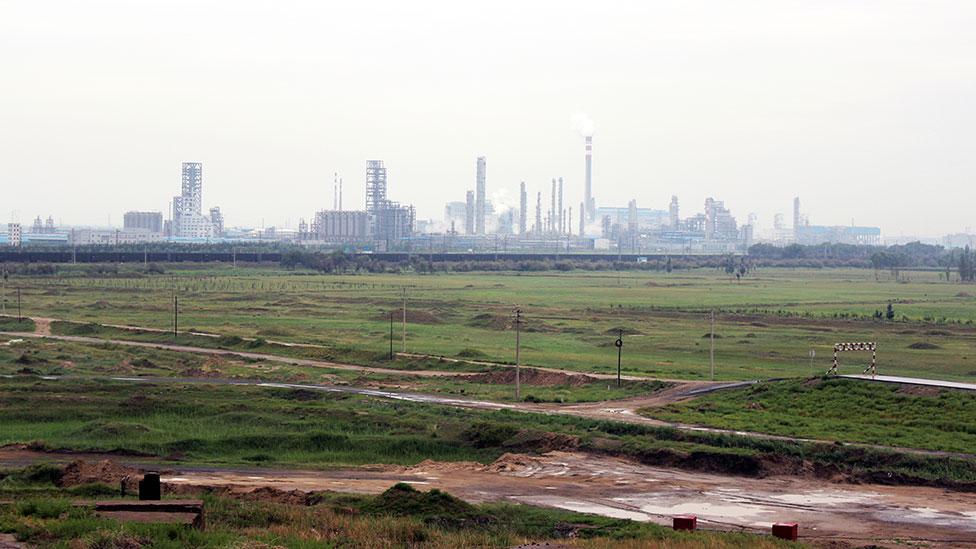 And there’s no better place to understand China’s true sacrifice than the shores of Baotou toxic lake. Apparently created by damming a river and flooding what was once farm land, the lake is a “tailings pond”:  a dumping ground for waste byproducts. It takes just 20 minutes to reach the lake by car from the centre of the city, passing through abandoned countryside dominated by the industrial architecture on the horizon. Earlier reports claim the lake is guarded by the military, but we see no sign. We pass a shack that was presumably a guard hut at one point but it’s abandoned now; whoever was here left in a hurry, leaving their bedding, cooking stove, and instant noodle packets behind when they did. 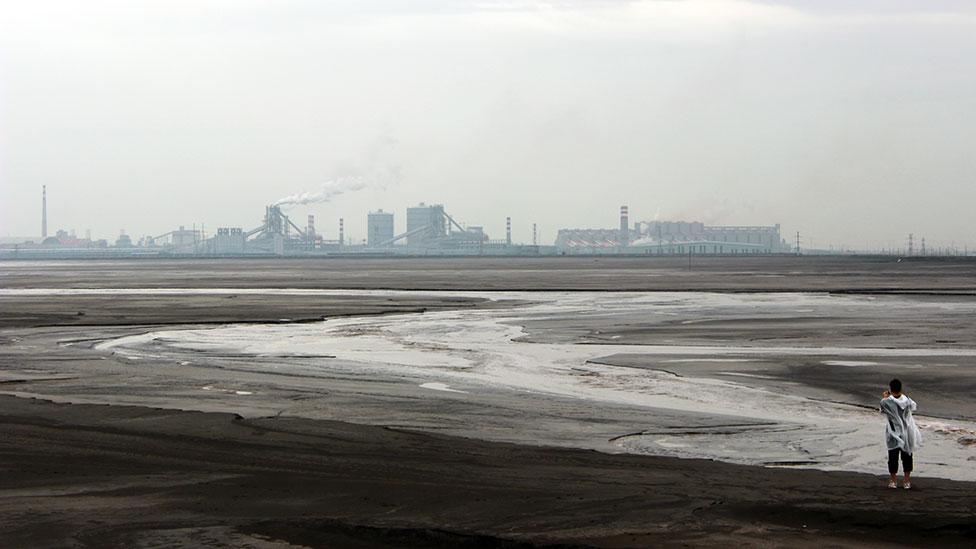 We reached the shore, and looked across the lake. I’d seen some photos before I left for Inner Mongolia, but nothing prepared me for the sight. It’s a truly alien environment, dystopian and horrifying. The thought that it is man-made depressed and terrified me, as did the realisation that this was the byproduct not just of the consumer electronics in my pocket, but also green technologies like wind turbines and electric cars that we get so smugly excited about in the West. Unsure of quite how to react, I take photos and shoot video on my cerium polished iPhone.

You can see the lake on Google Maps, and that hints at the scale. Zoom in far enough and you can make out the dozens of pipes that line the shore. Unknown Fields’ Liam Young collected some samples of the waste and took it back to the UK to be tested. “The clay we collected from the toxic lake tested at around three times background radiation,” he later tells me.

Unknown Fields has an unusual plan for the stuff. “We are using this radioactive clay to make a series of ceramic vessels modelled on traditional Ming vases,” Young explains, “each proportioned based on the amount of toxic waste produced by the rare earth minerals used in a particular tech gadget.” The idea is to illustrate the impact our consumer goods have on the environment, even when that environment might be unseen and thousands of miles away.

After seeing the impact of rare earth mining myself, it’s impossible to view the gadgets I use everyday in the same way. As I watched Apple announce their smart watch recently, a thought crossed my mind: once we made watches with minerals mined from the Earth and treated them like precious heirlooms; now we use even rarer minerals and we'll want to update them yearly. Technology companies continually urge us to upgrade; to buy the newest tablet or phone. But I cannot forget that it all begins in a place like Bautou, and a terrible toxic lake that stretches to the horizon.

Read the first two instalments in this series, where Tim Maughan and the Unknown Fields group visits the Chinese city of Yiwu, the real home of Christmas and explore the invisible shipping network that keeps the world running
.
This trip was organised and funded by the Unknown Fields Division, a group of architects, academics and designers at the Architectural Association School of Architecture in London.

I’d seen some photos before I left for Inner Mongolia, but nothing prepared me for the sight 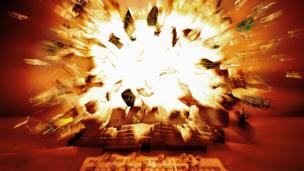 How to really break the internet 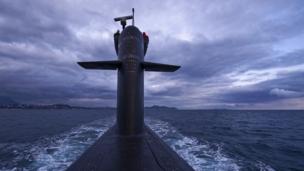 Where nuclear subs go to die 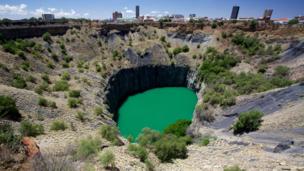 The deepest holes dug by hand
Around the BBC