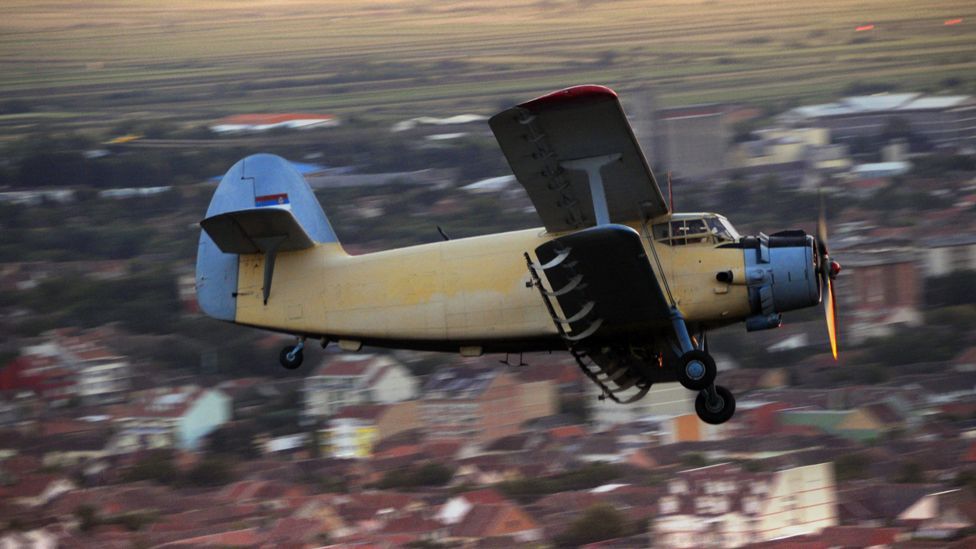 By Stephen Dowling 16th April 2015
The Soviet Antonov An-2, which has been generating headlines from North Korea, can perform a feat that seems impossible, says Stephen Dowling.
I

In early April, North Korean media unveiled a new camouflage scheme for one of its most important military aircraft. The supreme leader himself, Kim Jong-Un, was seen on television footage at the controls of one of the spruced-up examples. But this was no sleek and nimble jet fighter – it was a 1940s-era biplane that looks like a tractor with wings. North Korean An-2s could be used to fly low and slow over the border to drop commando teams behind South Korean lines – so low that they would be difficult to pick up on radar.

The Antonov An-2 proudly displayed by the North Korean military is now painted green on top and blue on the bottom, a colour scheme that makes it difficult to see, both by planes flying above and observers on the ground. But why, in 2015, would the North Koreans be flying a plane that looks more at home in an Indiana Jones film than front-line service? 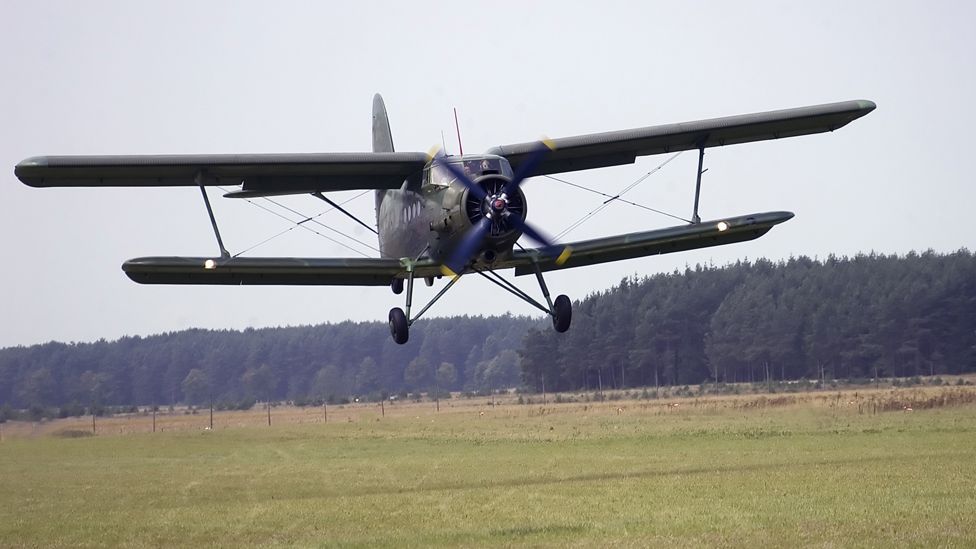 An An-2 can take off and land in only a few hundred metres (Credit: Getty Images)

The Antonov An-2 first flew in 1947, as the Soviet Union was rebuilding after the tumult of World War II. Even on its maiden flight it looked archaic; aviation technology had already joined the jet age. But the An-2 was an incredibly sound design – built in the thousands, exported all across the globe, and still serving nearly 70 years after decades of production. And the plane has one very special attribute – aside from its remarkably short take-off and landing – that should be physically impossible. It can, essentially, fly backwards.

The An-2 was designed to fulfil a role needed by the Soviet Forest Ministry, both as a crop duster and for utility transport. Its designer, Oleg Antonov, created a large, single-engine biplane, with an enclosed cockpit and room for up to 12 passengers or just over a tonne of cargo. The An-2 would have to operate from rough airfields – not just unpaved, grass airstrips, but dirt roads and forest clearings in the middle of Russia’s sparsely settled wilderness. This called for a simple, tough aircraft that would be able to take off and land in very short spaces – an aircraft much easier to maintain than more mechanically complex helicopters.

If you've got a strong enough wind, you can ‘hover’ the aeroplane

More than 19,000 were made in the Soviet Union and then Poland until 1991, and thousands more under licence in China – occasionally aircraft continue to be built there.

“The reason the An-2 still flies is that there is really no other aircraft like it,” says aviation writer Bernie Leighton, who has flown in an An-2 in Belarus. “If you need an aircraft that can carry 10 soldiers, people or goats, that can take off from anywhere and land anywhere ‒ it is either that or a helicopter.

“Flying on an An-2 is unlike any other aircraft in modern times. First, it's a tail-dragger, so once you climb the steps into the cabin, everything is leaning distinctly rearwards. It is also a very ‘firm’ aircraft. You feel every single bump in the terrain, every control surface movement. One must remember, however, that this aircraft was not built for passenger comfort,” says Leighton. 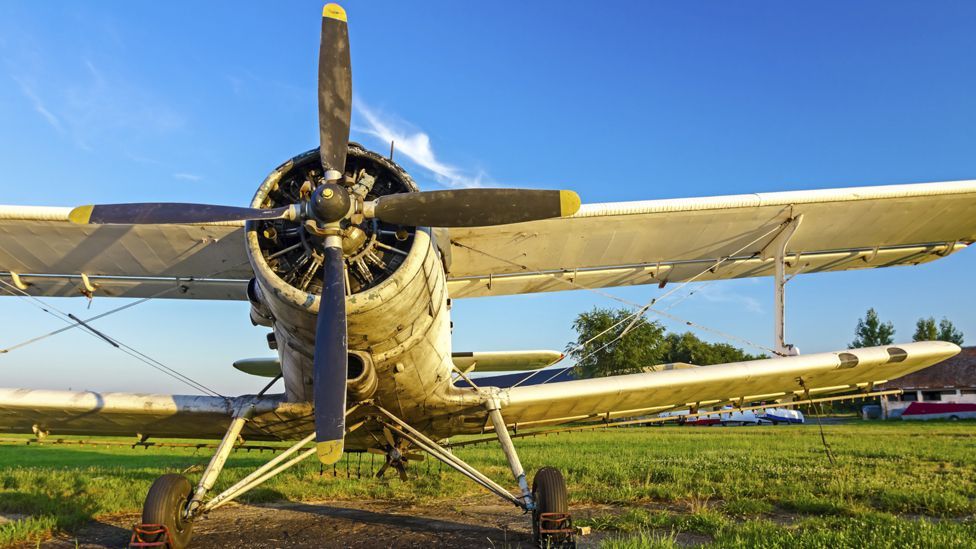 “Is it extremely loud? Yes, especially for a single-engine aircraft. Is it strangely warm despite only having small windows? Of course. Still, it's an absolute blast once you get airborne.”

The An-2’s archaic design is a means to an end; the two sets of wings in its biplane design generate a lot of lift – which means it can take off in a very short distance, as you can see below.

The lift that these wings provides means that the An-2's minimum speed is remarkably slow. A pilot can still fly the plane under full control at around 25mph (40km/h). In fact, its flight manual does not have a published stall speed. An average Cessna, by comparison, will stall if the airspeed drops below 50mph (80km/h). This makes the An-2 very popular with parachute training and skydiving schools, and it also means the aircraft can essentially hover – a favoured trick of An-2 pilots during airshow displays. To do so, the pilot flies into a headwind, and if the wind is strong enough, this manoeuvre can make the plane move backwards very slowly while still under full control.

Sounds impossible? Then ask Bill Leary, the flight manager of the UK An-2 Club which flies out of Popham Airfield near Basingstoke in the UK. He’s been flying an ex-Hungarian An-2 for the past 14 years.

The key to the plane’s ability to hover – and even fly backwards in the right conditions – lie in the ‘control surfaces’ on the wings. At the front are flexible panels called leading edge slats. These are often deployed during landing, as they increase wind resistance and bring down the aircraft’s speed. Similar panels on the rear of the wing called flaps can be used to lower the speed of the aircraft as well but increase lift by altering the shape of the wing. On an An-2, the flaps run the entire length of the back of the lower wings, and more on the top wings, which equals lots of lift, and a ridiculously slow minimum speed. 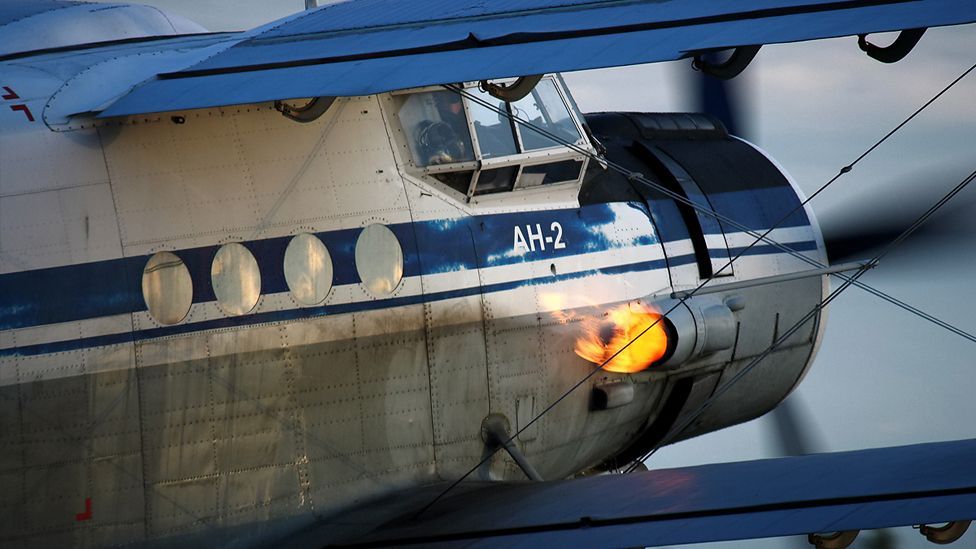 “If you’ve got a strong enough wind, let’s say 15 to 20 knots, you can ‘hover’ the aeroplane,” says Leary. “You put all of the flaps down and leading edge slats on the front of the wing, You turn the aircraft 40 degrees into the wind and give the engine an awful lot of power and you can hold it there.”

Leary describes the An-2 as a joy to fly, but adds that it demands a lot of attention. It’s very sensitive to movements on the control stick – essentially the plane ‘wants’ to fly, so requires little effort to move upwards. But turning the aircraft requires great physical effort. The An-2 has no computers to move the flying surfaces, like a modern Boeing or Airbus, and it doesn’t even have hydraulic controls, which require less force – “it’s all down to cables and rods and human effort,” says Leary.

“It’s very physical. You need the muscles of an ironmonger.”

Had the An-2 been designed and built on the other side of the Berlin Wall, its resilient design might have made it a much more famous plane than it is. “The An-2 only kills you if you do something stupid in it,” says Leighton. “It's almost too simple to suffer from things like metal-fatigue. If it lost its engine, well it's not like you really have to worry about where to land. It's not a comfortable aircraft, but it really is extremely safe.” And of course, this unassuming plane has a brilliantly “backward” ability that puts it in a class of its own.

Tomorrow's Lives
1‘I use a drone to spy on people’
Best of the Web
2The chilling truth about MH370?
In Depth
3The world’s noisiest spy plane
Technology
4Planes that changed the world
Around the BBC