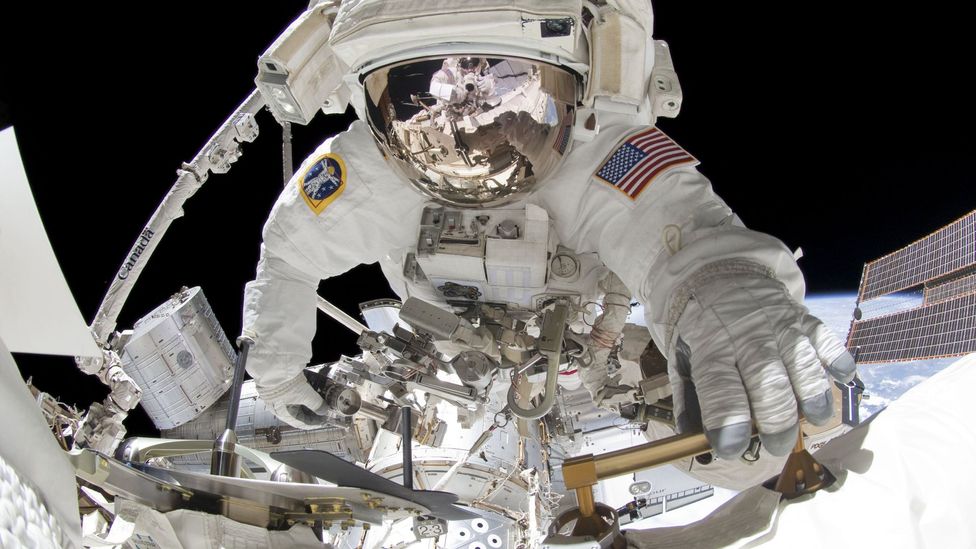 Jennifer Pruitt has one of the most interesting job descriptions in Nasa, if not the entire space industry.

“The title is one of the things I like about my job,” she says proudly. “There are not many people around the world working on this kind of technology."

There’s nothing wrong with the Russians, they still pee like everyone else

Pruitt works at the Marshall Space Flight Center in Huntsville, Alabama on the International Space Station’s (ISS) water recovery system. Her goal is to devise the most efficient way to extract drinking water from astronauts’ urine.

Urine contains around 95% water (the rest is made up of the body’s waste chemicals) so the more water that can be recycled from the two ISS space toilets, the less that needs to be brought up from Earth on costly supply-runs.

In the reception area outside Pruitt’s laboratory, there is a small exhibition area devoted to urine. Jars of the stuff are displayed on a shelf – they range in colour from a perfectly regular-looking light yellow, through brown to a disconcerting black.

Disturbingly, the jar labelled “American pre-treated urine” is a much lighter colour than the jar with the Russian label.

What does this say about Russian urine?

“There’s nothing wrong with the Russians,” says Pruitt reassuringly, “they still pee like everyone else.” 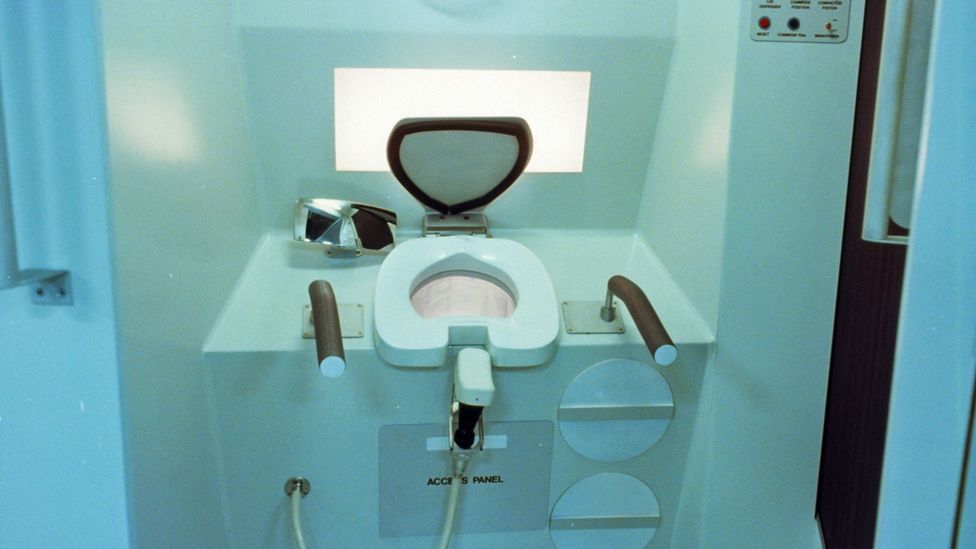 “When the astronauts use the bathroom, we can’t let the urine go through the system by itself,” Pruitt explains. “We have to put some extra chemicals in it to stop the urine breaking down, as well as preventing the growth of bacteria.”

This pre-treatment is the start of a sophisticated process Nasa has developed to recycle water from space toilets. This recovered water is combined with moisture filtered from the air in the ISS – mostly from astronauts’ sweat – to be turned back into drinking water. The space agency estimates that the average astronaut will drink 730 litres of recycled urine and sweat during a year-long mission.

But Nasa has a problem.

Although the sweat recovery part of the equation is working well – with almost all moisture returning to drinking water – the urine recycling system has not been performing to expectations. In the lab on Earth it runs at around 85% efficiency – with only 15% of water lost. In orbit on the ISS, only 75% of water is recovered.

“In space, calcium leaches out of astronauts’ bones and one of the things we didn’t think about before is where that calcium went,” Pruitt says. “We found out that a lot of it comes out in their urine.”

This means an astronaut’s urine in space has a different chemical composition to the urine – donated by Marshall employees – the engineers were working with on the ground. 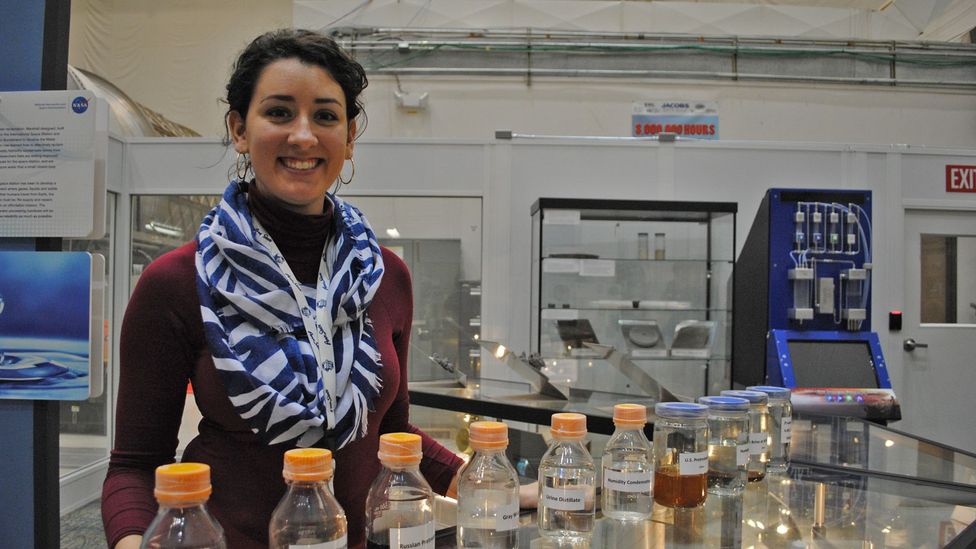 Jennifer Pruitt's work means more of the water in astronaut's urine could be drinkable once more (Credit: Richard Hollingham)

“We found that, because of the extra calcium, the urine was reacting with the pre-treatment chemicals to form calcium sulphate,” explains Pruitt, “Big salt clusters were gunking up the system – basically it stopped working.”

You can only imagine the horror of being trapped in a metal box 400 kilometres (250 miles) above the Earth with five other people and no working toilet. As a result of these blockages, ISS astronauts have had to spend extra time on maintenance and more water has had to be transported from Earth than originally planned.

But Pruitt’s team has come up with a solution. By changing the chemical composition of the urine pre-treatment, they hope to get urine recycling on the ISS working more efficiently.

To test the latest chemical concoctions, Pruitt has a working replica of the urine processor spread out along a table in the vast hangar at Marshall where Nasa devises and tests its life support systems. A banner hanging from one of the roof girders informs visitors that the lab has been “keeping astronauts alive since 1973”.

The urine-processing machine – a deconstructed replica of the one in orbit – consists of a bewildering jumble of tubes, pumps and wires attached to an enormous jar of urine – pre-treated so it resembles a super-sized cola. As the machine gurgles away, Pruitt talks me through how it works.

It’s the cleanest water, cleaner than anything we’ll drink on Earth

“We have everything laid out horizontally so we can discount any effects of gravity,” she explains. “The pumps we use work the same way your oesophagus does – constricting and pushing the fluid around.”

We watch as urine is squeezed along one of the transparent tubes towards the largest cylinder in the system, around the size of a domestic oven. This tank has a vacuum pump attached that sucks out the air to lower the pressure inside. By reducing the pressure, the boiling point of the liquid also drops. This means water can be separated without applying any heat.

Improving the technology means less water may have to sent up on expensive resupply missions (Credit: Science Photo Library)

The remaining liquid left after distillation is cycled back around the system to extract the maximum amount of water. The final products of the process are a concentrated salty sludge of waste and pure drinking water. In space the waste would be packed into a redundant supply ship and burned up in the Earth’s atmosphere during its return to Earth. The water is ready to drink.

“It’s the cleanest water,” says Pruitt, “cleaner than anything we’ll drink on Earth.”

However, before the astronauts get to sup this super-clean water it is further treated to prevent the growth of bacteria. This involves adding iodine, which gives water on the ISS a slight medicinal taste. “It’s not bad,” says Pruitt. “You just have to get used to it.”

Having proved the new pre-treatment formula no longer causes blockages, Nasa engineers will be introducing the revised system over the coming months. The hope is that it should bump up water recovery rates in space to the same efficiencies they are seeing in the lab on Earth.

In the meantime Pruitt’s team is developing the technology to make the process even more efficient.

“Even when you’re in urine for several years,” she says, “it’s still fun!”