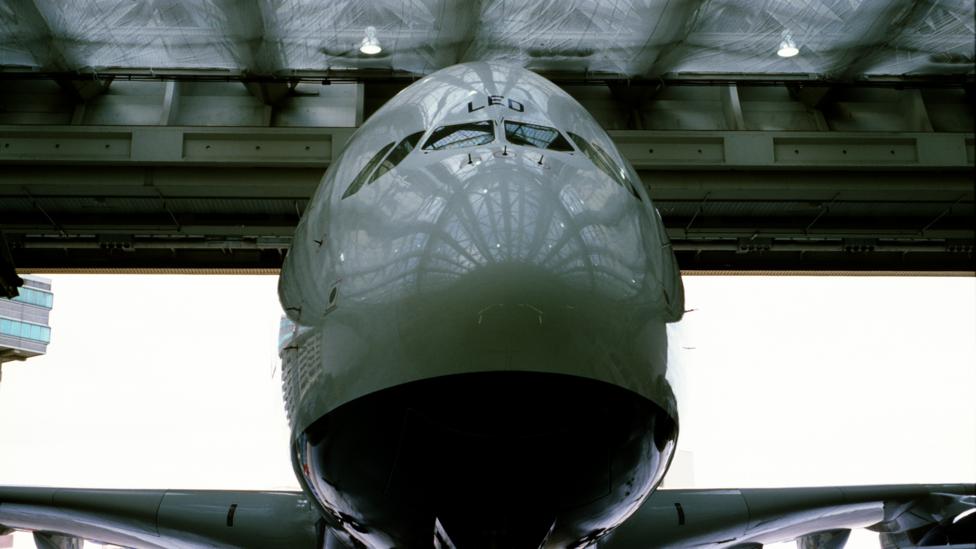 By Jack Stewart 8th June 2015
The Airbus A380 is the world’s biggest airliner. Jack Stewart gets a behind-the-scenes look at some of its secrets.
T

The Airbus A380 is the largest passenger plane in operation, and is still an awe-inspiring sight nearly a decade after it first entered regular service.

Stand at the end of the runway at one of the large airports that it operates out of, and you will hear people exclaim “how does something that big get into the air?!” Often the next comment is: “How do they get all the people on and off?” Because that’s the other thing about this giant of the skies; as we’ll find out it can fit hundreds of people, their luggage, and the comforts and entertainment they demand on its long flight routes.

British Airways has ordered 12 A380s for its fleet (some of which are still being built), and invited BBC Future to witness an engineering service inspection – known as a 2A check – to see the parts of the plane that the paying public do not usually get to see, and to discover the answers to some of the most common questions.

First things first; the A380 is so large that the engineering hangars at Heathrow Airport had to be specially modified – and these hangars can easily swallow a Boeing 747. The 1950s buildings are architectural landmarks, but at 23m (76ft) high were just a shade too short to fit the plane’s giant tail fin. The entrance to two hangars was given an extra notch in height of 3.5m (11.5ft) to allow the A380 tail to pass through. It is still a tight fit, as you can see in our timelapse:

Derek Cogswell, an aircraft engineer for British Airways, was our guide through the engineering maintenance facilities. “It took about 18 months to convert these two hangars to be able to accept the A380,” he says.

The aircraft we are touring is in for a service check, which occurs every three months. “As a passenger you only ever see these engines closed up,” he says. “But we’re going to open them up now so that you can see the complexity of these amazing machines.”

The A380 is available with a choice of jet engines. The configuration BA uses is four Rolls-Royce Trent 900 turbofans.

Unusually the A380 does without thrust reversers on the outermost engines, which are normally used to slow down an aircraft on landing. The giant brake packs on each of the A380’s wheels were designed to produce all the braking power needed.

You can see them here:

There are thrust reverse systems on the inboard engines (the ones closest to the fuselage on each wing) to assist when the tyres don’t have enough grip, such as on a wet runway.

The engine cowlings are so large they cannot be opened by hand, so they have to use electrical power. Several clamps are released by hand, and then it’s just a case of pushing an “UP” switch and letting the motors whine and do their work. BBC Future was allowed to open the cowling, but as Cogswell explained safety is always upmost. “That’s my responsibility,” he says. “I’ll be there to make sure it’s all closed properly and safe for flight.” 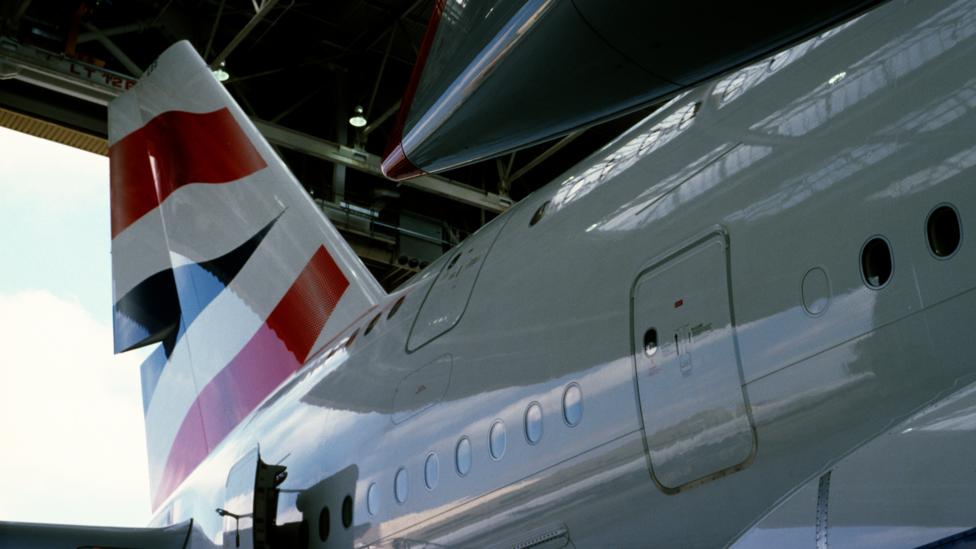 The hangars underwent 18 months of refurbishment in order to fit the outsize airliners (Credit: Stephen Dowling)

Onboard the plane, there are areas that might look familiar to the frequent flyer, but there are a number of other areas that passengers never get to see. Divided across the two decks which run the full length of the aircraft there are seats for 469 passengers in the configuration that British Airways uses. If all the seats were economy though, Airbus believes 853 people could fit on board. That’s half the number of passengers on the QE2, if you’re counting.

In between two of the cabins on the lower deck there is a small door in the bulkhead, with a combination lock. As Cogswell says, “there is a whole new world down here”. There are 12 bunks for the crew to take rest breaks on long flights, and the pilots have their own beds too. Check out where they’re hidden in the video here:

A modern aircraft like the A380 requires a vast number of avionics, computer systems that enable the aircraft to keep flying – it’s the computers making all those minor adjustments that help maintain a comfortable flight. The cockpit is designed to be familiar to pilots, but also to embrace new technology and ways to interact with it. 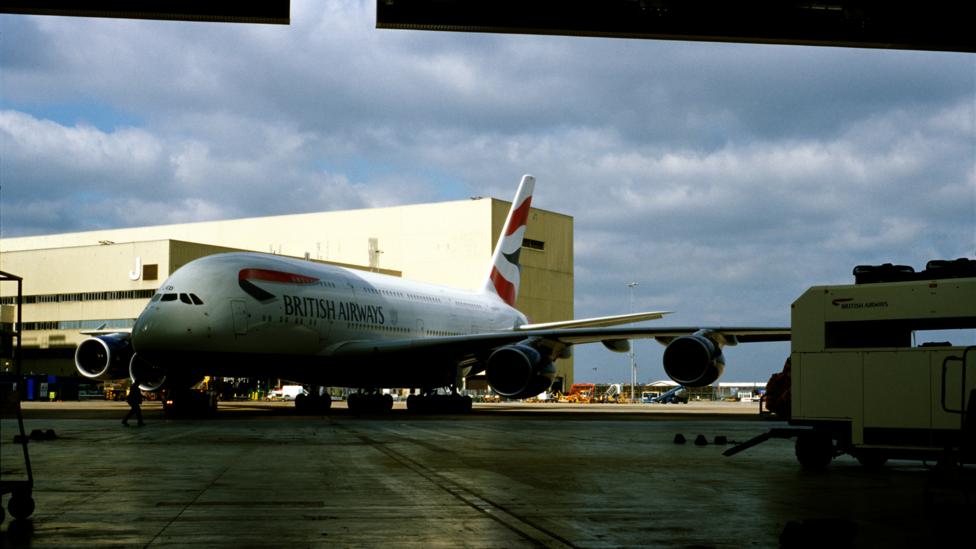 The British Airways A380 fly from Heathrow to long-haul destinations such as Hong Kong and San Francisco (Credit: Stephen Dowling)

Linking all these systems together is a network of cables and banks of equipment that might look more familiar to a mainframe computer engineer than a flight technician. They look after everything from the radar to the air conditioning to the computers maintaining flight controls.

The computers that control those systems, and the network of cables that distribute the commands, live in another hidden area of the aircraft. They’re so important to the plane that they have their own area, accessible via a hidden trapdoor and ladder. BBC Future got to climb through the cables into the tight space to see them:

Working on the A380 has presented some unique challenges to engineers such as Cogswell. “I think it’s size more than anything,” he says. “Everything is big, everything is heavy, everything is high up. If you go to the top of the tail… it’s a long way down!”

Bear all of this in mind, next time you’re travelling in one of Airbus’s behemoths… 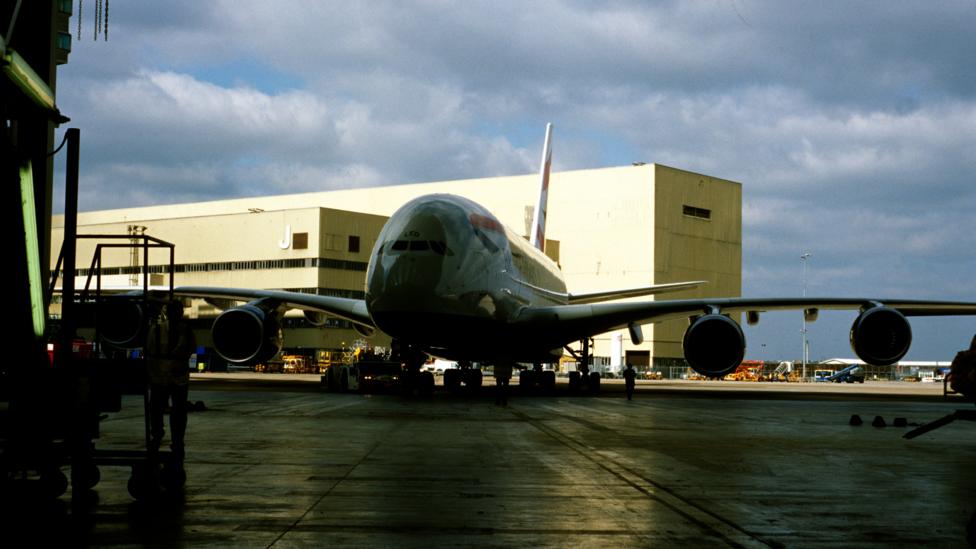 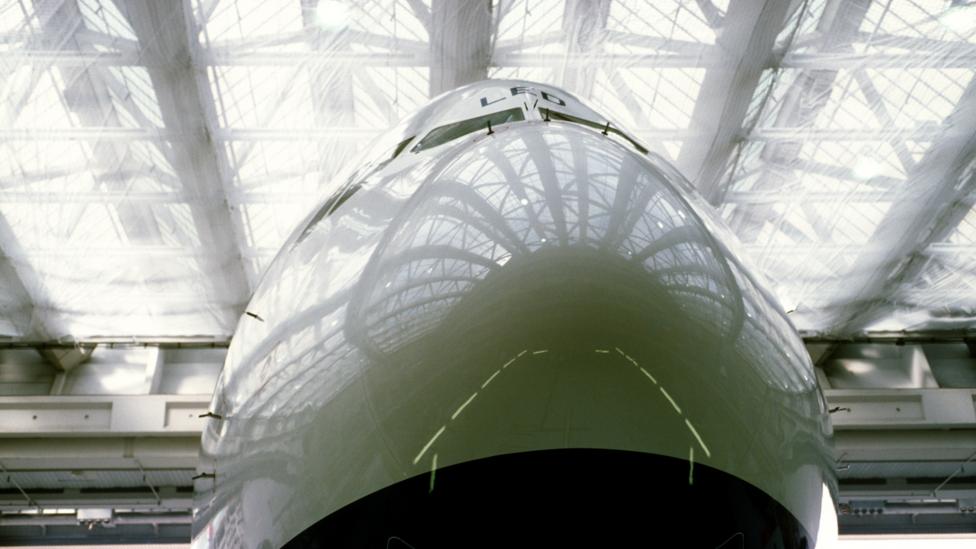 The A380 is capable of carrying more than 850 passengers (Credit: Stephen Dowling) 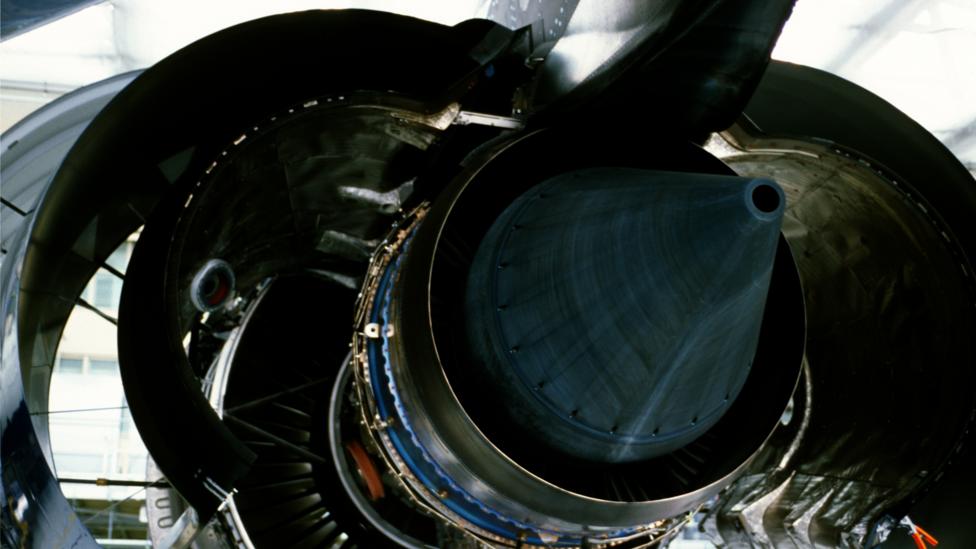 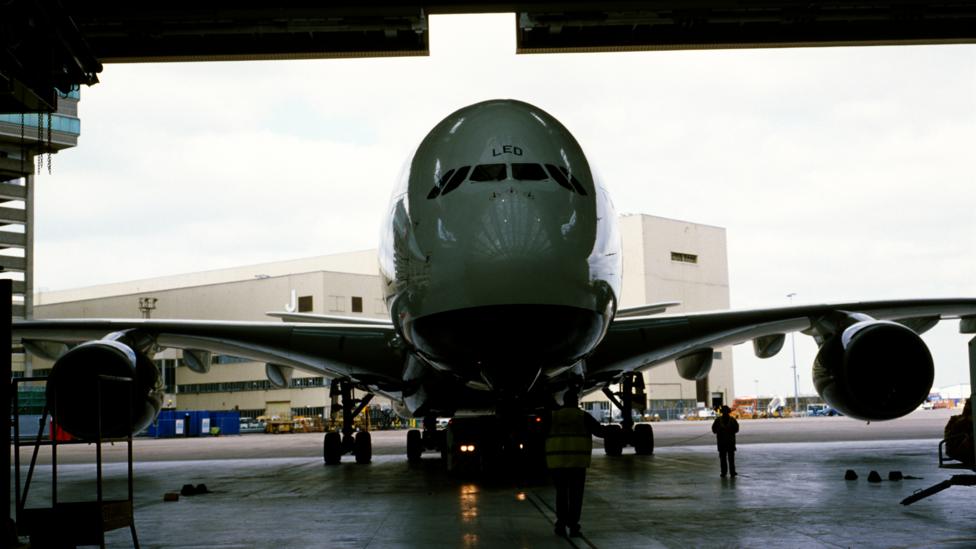 More than 160 Airbus A380s have been built so far (Credit: Stephen Dowling)

HyperDrive
1My ride in a radical robot truck
HyperDrive
2Dawn of the plastic car?
HyperDrive
3How movie spacecraft are made
HyperDrive
4Nasa’s amazing airport simulator
Around the BBC