Loading
Last Place on Earth | Anthropology
What happens when the sea swallows a country?
Share using EmailShare on TwitterShare on FacebookShare on LinkedinShare on Whatsapp 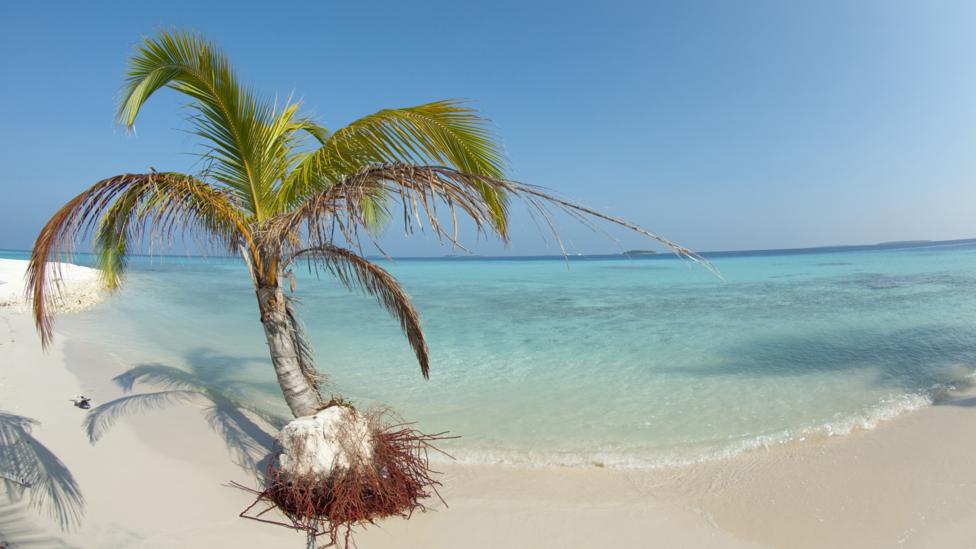 By Rachel Nuwer 17th June 2015
If sea levels rise as feared, some of the world’s island nations may disappear this century. Does that mean they no longer exist as countries, asks Rachel Nuwer.
A

As the seaplane lifts off the water’s surface and begins to climb, paradise opens up beneath us. The deep blue ocean stretches in every direction, but it is punctuated here and there by aquamarine discs of shallow coral reef that give way to the slightest slivers of white sand. Lavish hotels clinging to those oases sprout tentacles of bungalows, extending their small stake of precious solid ground.

People come from all over the world to experience the impeccable luxury of the Maldives, a nation composed of around 1,200 islands, located 370 miles (595km) off the southernmost tip of India. Despite its remoteness, the resorts here – each located on its own private island – are unparalleled. Guests can sip $40 (£25.60) glasses of Champagne at freshwater pools’ swim-up bars, dine on Russian caviar and Wagyu steak, and stream the latest episode of Game of Thrones in their air-conditioned suite. Nothing is lacking, nothing is out of reach.

For the citizens of around six to 10 island nations, climate change could rob them of their entire country

Yet amid all this, a sinking realisation constantly undermines the islands’ carefully manicured perfection. It’s the knowledge that all of this may soon be gone. The nation, with its low-lying islands, has been labelled the most at-risk country in South Asia from the impact of climate change. Even if the swooning honeymooners do not allow this thought to mar their vacation, for the ever-smiling staff members, it’s harder to ignore. “Of course I’m concerned about climate change, about the reef, the environment and pollution,” says Mansoor, a Maldivian who works at one of the resorts. “But what can I do? I don’t know.” 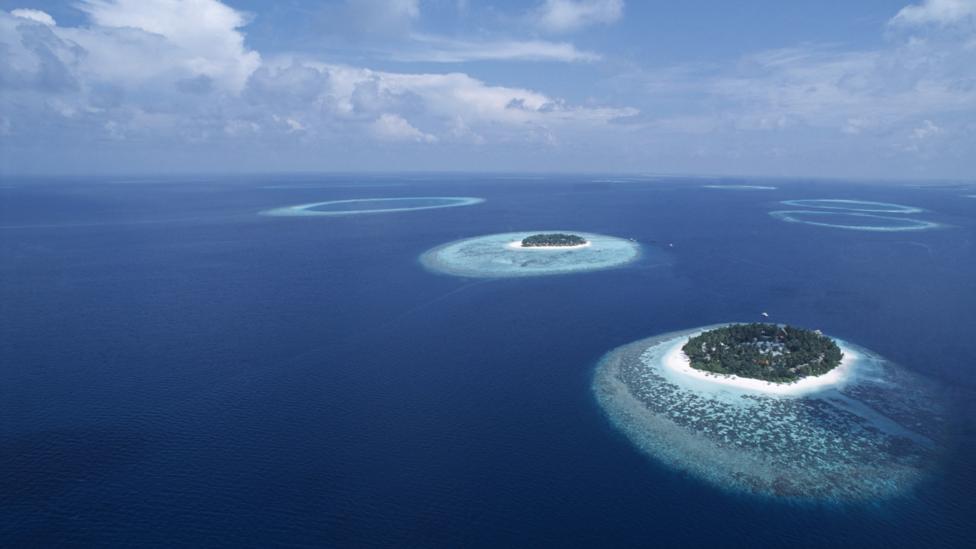 The Maldives are one of a handful of nations that could disappear completely (Credit: Science Photo Library)

Climate change threatens waterfront developments and seaside cities around the world, but for some, the stakes are higher than simply having to move a few miles inland, or even having to relinquish large cities like Miami, Amsterdam and Shanghai. For the citizens of around six to 10 island nations, climate change could rob them of their entire country.

While it’s impossible to know precisely what will happen in the future – and it’s worth pointing out that some research suggests a few island states might not be doomed by rising sea levels – many scientists fear that, no matter what mitigations we make, we’ve already condemned some countries to a physical disappearance. Even if we switched off all emissions now, we probably already have enough climate change-causing greenhouse gas emissions to result in another foot or two of sea level rise in the coming years. “It might be that no amount of technology will allow us to prevent inundation of some low-lying island nations,” says Michael Mann, a renowned meteorologist at Pennsylvania State University. “That’s a reminder of what I like to call the procrastination penalty, of certain tipping points that we’ve physically and societally crossed.”

Never before has a country literally disappeared

If we somehow managed to cap our man-made temperature rise at just 1.5C above pre-industrial levels – as island nations have called for – most of them could remain above water. But most other nations, especially more developed ones, seem more comfortable considering a global temperature rise 2C or even 3C above pre-industrial levels. “The Pacific island states have been leading the pack in terms of alerting the planet Earth to the fact that these small islands, which produce almost zero greenhouse gas emissions, are sitting on the frontlines of climate change,” says Jose Riera, a special advisor at the UN.

At this point, however, that scenario seems nearly unavoidable, forcing the question of what will transpire when the losses begin to unfold. While nations have been absorbed by other nations or split off to form new ones in the past, never before has a country literally disappeared. 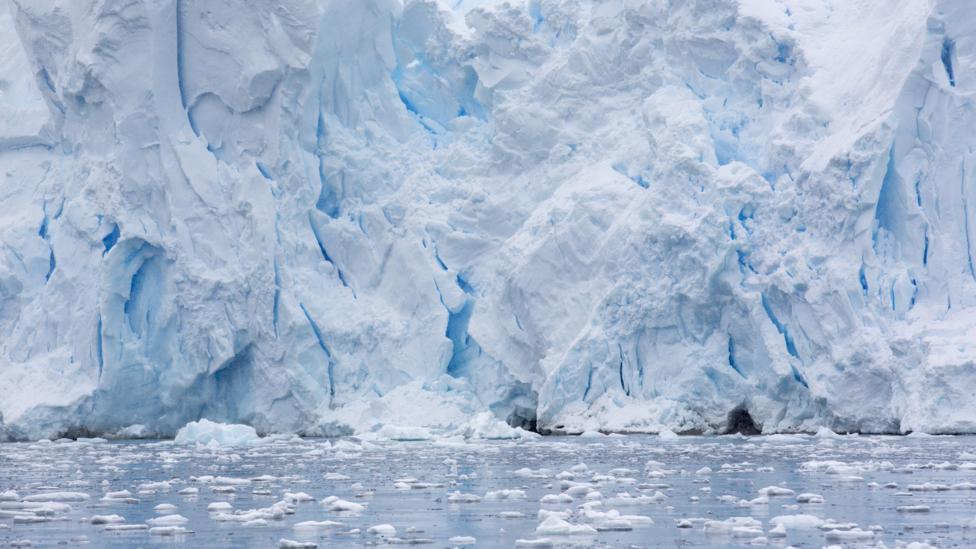 The rising sea level from melting glaciers could cause some countries to become 'virtual' nations (Credit: Science Photo Library)

As such, there is no legal, cultural or economic precedent for what happens to a group of nationals who no longer have a physical home. “A new concept of citizenship will have to be developed internationally,” says Michael Gerrard, director of the Sabin Center for Climate Change Law at Columbia Law School. “I have confidence that island nations will still be states throughout this century, but the next one is another question, with many uncertainties.”

Those uncertainties bring up many questions, he says. Does the submerged nation still have a seat at the UN? Does it have an exclusive economic zone, and therefore the right to control fishing and mineral exploitation in its waters? Where will its people go? What will their citizenship be? And do they have any legal rights against greenhouse gas emitters or nations?

These questions will be further complicated by the political and environmental landscape of the not-too-distant future. By the time island nations begin to actually disappear, Gerrard says, the world at large will be in crisis mode, with massive displacements occurring in low lying areas such as Bangladesh, the Nile Delta, the Mekong Delta and many other places. As such, the legal and logistical problems of small island states will not likely be a top global priority.

Gerrard fears that the current situation in Syria and parts of Africa, in which hundreds of thousands of people displaced by political and economic strife are desperately fleeing their homes and seeking safe haven – many of them dying in the process – is a harbinger of what is to come if the world does not prepare. “The numbers of people involved in the current crisis are one or two orders of magnitude [lower] than what would eventually be faced in a climate crisis,” he says.

While Gerrard is reluctant to predict 85 years into the future, he points out that the situation for nationals who lose their state, even now, is far from clear. While island nations are thinking about these problems, most other countries are not. There is currently no international agreement on the fate of climate-displaced people – the legal term for someone forced to flee their home because of problems caused by global warming – and no one has yet to make a successful bid for citizenship based on the effects of climate change. 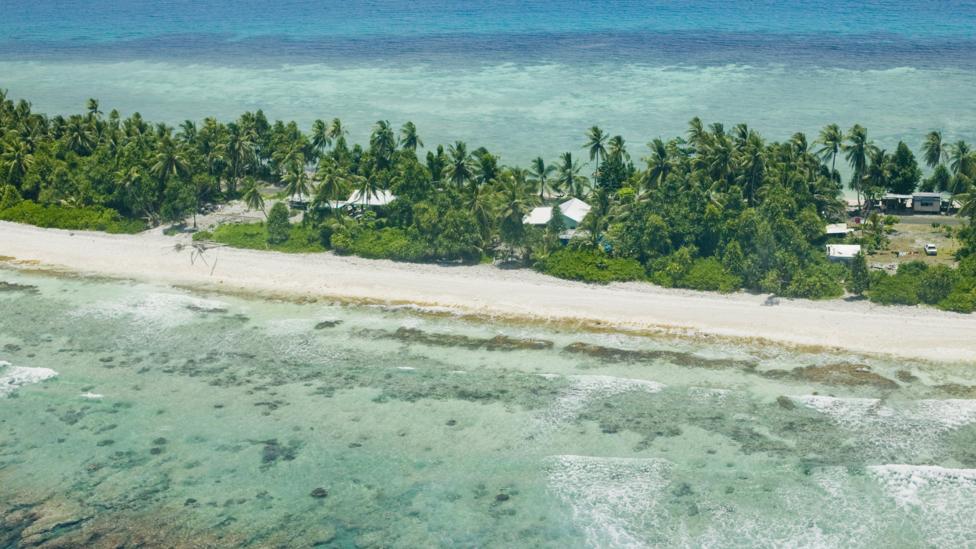 In countries such as Tuvalu, people are already trying to prepare for a future off their islands (Credit: Science Photo Library)

Last November, for example, a New Zealand judge rejected claims by a Kiribati citizen that he and his family should be granted climate-based refugee status. The judge pointed out that the Kiribati man was not being persecuted and therefore could not claim to be a refugee. The judge added that, should he relax his definition and allow the man and his family to stay, he’d likely have millions more knocking on New Zealand’s door, asking for the same leniency. Indeed, over the past two decades, New Zealand and Australia have dismissed nearly 20 other similar cases.

“With the way the 1951 Refugee Convention is written, anyone who crosses a border and says, ‘Hi, I’m here because of climate change,’ has zero status under international law,” Riera says. “A number of countries are beginning to look at these issues, but the sticking point is that there’s still no visa category today for these types of people.”

It would be a new situation, but not something our current process can’t handle         - Kim Davies, Icann

Eventually, however, as Gerrard, Riera and others are pushing for, countries will have to face reality and begin either opening their borders or finding other ways to help climate-displaced persons, such as selling parcels of land to allow them to relocate their state. Riera predicts that other nations will play nice, allowing disappearing places to keep their economic assets. “The international system prefers repose, not disorder,” he says. “So I don’t see the US pointing a finger at poor Kiribati or Tuvalu and saying, ‘You’re not a state!’”

Likewise, as long as the UN continues to recognise the nation, its country code – the unique two-letter combination countries use for state-specific domain names, international banking and passports – would remain functional. “If a county ceased to exist because of a lack of landmass, it would be a new situation, but not something our current process can’t handle,” says Kim Davies, director of technical services at Icann, a non-profit organisation responsible for managing the internet’s domain name system. “From our perspective, as long as they continue to be on the UN’s list, the country code will continue to exist.”


Island nations like Kiribati, a group of atolls dispersed over a 1.3 million sq mile (3.4 million sq km) patch in the Pacific, are determined to remain on that list. “For us in Kiribati, the science is quite clear,” says Rimon Rimon, a spokesman for the Office of the President of the Republic of Kiribati. “We know that – even if other countries decide to cut their emissions – in 30 to 50 years, our islands will be inundated.” 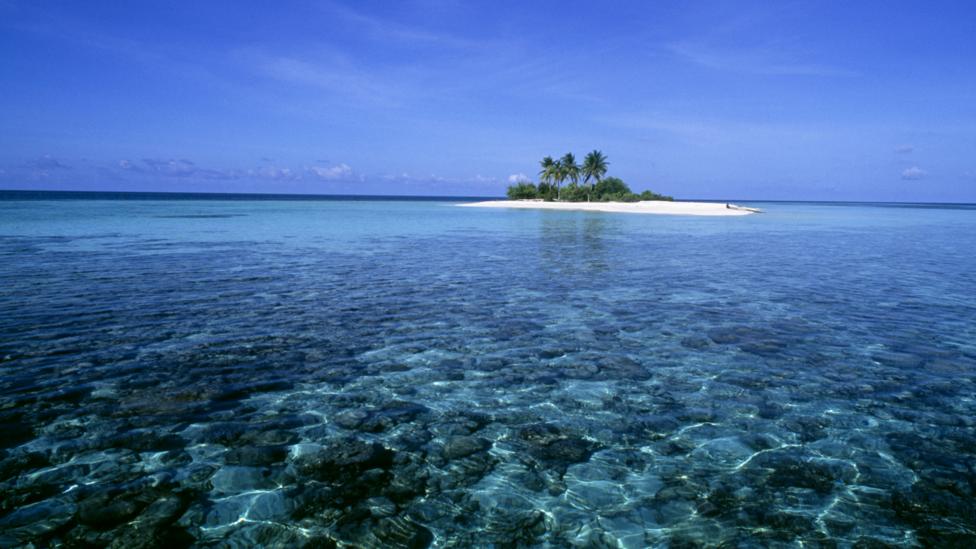 Island nations may have to move their citizens to countries that won't be swamped (Credit: Science Photo Library)

As such, Kiribati’s president, Anote Tong, has devised a plan he calls Migration with Dignity, which is supported by Australia and New Zealand. Kiribati citizens can travel to those countries to gain specialised training and skills. If and when the time comes to migrate permanently, then “they will do so on merit rather than just as a helpless refugee”, Rimon says. Last year, President Tong also purchased a small piece of land on one of Fiji’s islands, around 1,200 miles (1,930km) away. For now, Kiribati will use the land to grow crops and supply freshwater – resources already affected by rising salt water tides.

If the time comes, Kiribati may eventually move some of its citizens there. “We’re facing the loss of our identity, our culture and our customs due to the impacts of climate change,” Rimon says. “But we want to prepare ourselves so that 50 years from now, there will still be a nation called Kiribati.”