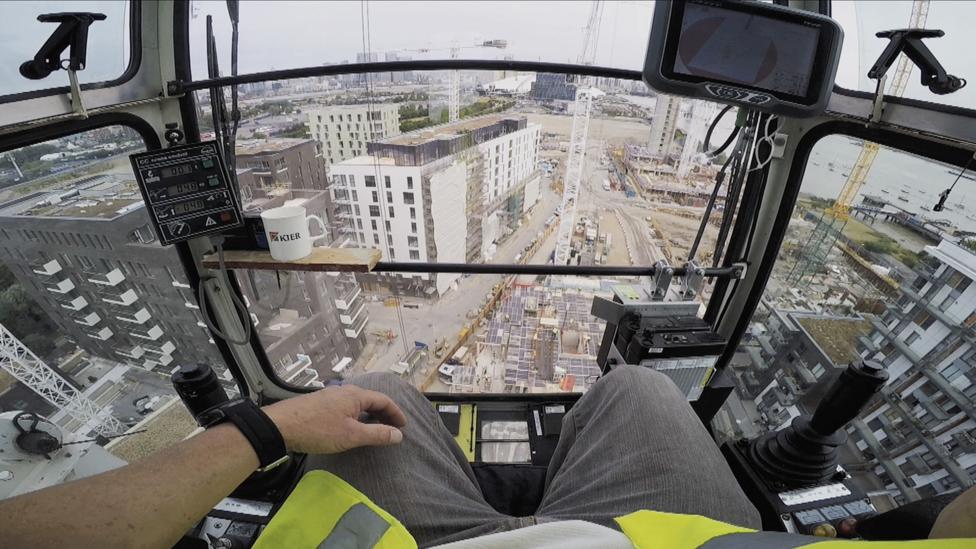 By Amanda Ruggeri 31st July 2015
Crane operators spend their days alone in a tiny cab… after a spine-tingling climb into the sky. What is their day – and commute – really like? We gave a driver a GoPro to find out.
T

The next time you’re complaining about your commute, just think: instead of spending an hour on a sweaty, crowded train, you could be climbing 135 steps to your office. An office that’s about the size of a desk, suspended 45m (150ft) in the air – and where, for hours at a stretch, you’re alone, accompanied only by the crackle of the radio, giving you directions for each manoeuvre.

Sounds preferable? Then you might want to become a crane operator.

For crane drivers, the often-unseen but indispensable agents behind any high-rise construction site, this is what the daily grind looks like – if not even higher up. The tallest building in the world, the Bhurj Kalifa in Dubai, is 828m; at the 310m-tall Shard, the highest in Europe, crane operators had to take lifts to get up to the cab. Talk about an adrenaline rush of a commute.

After getting up there, the only company the driver has is the voice of the banksman, giving directions over the radio. Other than that, silence. Various screens show information like the load weight, hook height and proximity to other buildings.

It might seem lonely. Even so, that daily grind is just as long for crane drivers as for cubicle-dwellers. Construction company Kier Group, who let us film them at work, said their operators work from 08:00 to about 18:00, including two half-hour breaks. (They can climb down, or they can spend it on a platform that measures 1.5m by 4.5m… as long as it’s not too windy). That’s still more than 8 hours spent sitting alone in a cab that measures about 1.5m by 1.5m, with only a view of the skyline for company.

What about when nature calls? Operators are allowed to climb down. But since the climb is 15 minutes in each direction, most choose to stay in the cab instead. We’re told a bottle tends to come in handy…