Loading
Journey: Upgraded | Biology
The search for an effective cure for motion sickness
Share using EmailShare on TwitterShare on FacebookShare on Linkedin 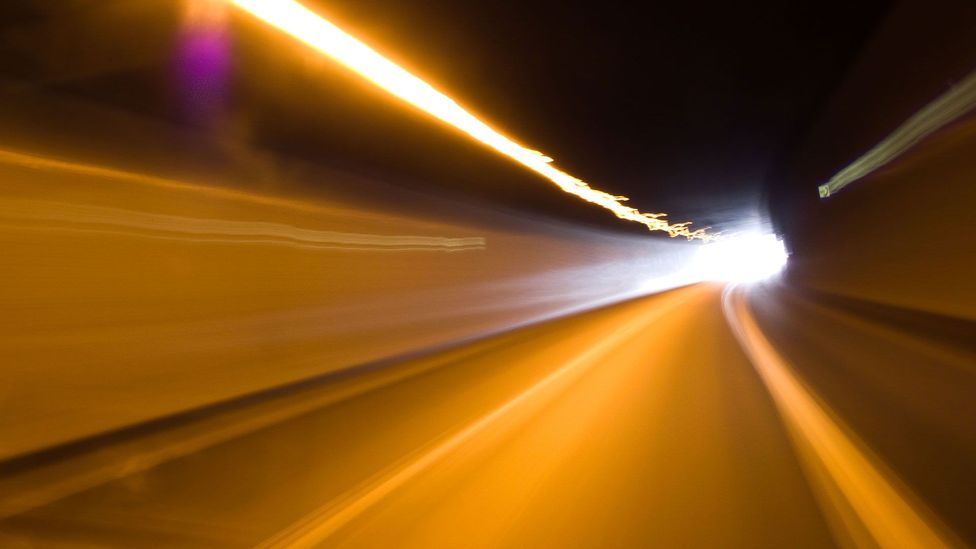 By Katia Moskvitch 17th August 2015
It’s a form of sickness that affects about one in three people. We can’t predict who will succumb or when. And there’s no cure, discovers Katia Moskvitch.
M

Motion sickness can seem like a minor ailment to those blessed with a sturdy constitution. “People don't die from motion sickness,” says Bill Yates, a neuroscientist at the University of Pittsburgh in Pennsylvania. But for sufferers it can be a real problem – particularly since the modern world doles up motion sickness-inducing scenarios on an almost daily basis: planes hit turbulence; cars swerve suddenly; ships list on a rough sea.

The condition can even impact our career choices. At 15, all I wanted to be was an astronaut. Acute motion sickness stepped in and said ‘nope’: I realised I was never going to adapt to the weightless interior of a spacecraft. Recently I had the chance to confirm my hunch. Strapped to the inner ring of an aerotrim, or ‘human gyroscope,’ with all its three rings rotating around different axes, I felt like my brain was spinning in one direction while my innards were pulled elsewhere.

But what exactly causes motion sickness? And is there any hope for a treatment?

In 1977, Michel Treisman, a psychologist at the University of Oxford, suggested that motion sickness might be an evolutionary response to food poisoning. His idea was that if your taste buds or the gut’s chemosensory system don’t spot a toxin in a meal, the dizziness and vomiting could be a fallback system. 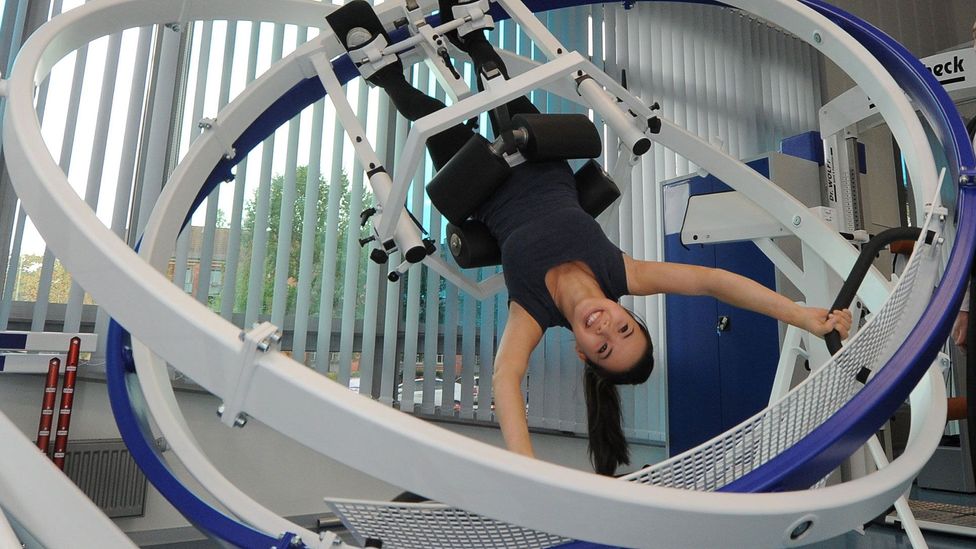 A gyroscope spins its subject around in three axis - with sometimes unpleasant results (Credit: Alamy)

That remains to be proven. The most popular explanation for motion sickness, however, is that it arises from a visual-vestibular mismatch. In simple terms, the central nervous system receives conflicting messages from the body’s balance receptors: the inner ears (vestibular system), the eyes (visual system), and the muscles down the back all the way to your feet (proprioceptive system). Basically, when you’re in a car or a plane, your inner ear signals that you're moving, but your eyes say that you're not – because your body is motionless in relation to its immediate environment, such as your seat, the floor, or the seat in front.

This offers an explanation for the observation that a functioning vestibular system is a prerequisite to get motion sickness. A 1968 study found that deaf participants on a narrow, wooden boat in 40-foot swells off the shore of Nova Scotia did not succumb to the condition.

Getting your sea legs

In the early 1990s, a group of researchers developed a different explanation, the so-called ‘postural instability’ theory, which states that people experience nausea in situations where they have not yet learned ways to maintain a stable posture. Our body is never truly motionless – muscles are always active even when we stand still. This causes a subtle movement known as body sway; people deal with it subconsciously all the time.

We still can’t predict who will get motion sickness, or when and where it might happen

But on a ship, if you want to ‘get your sea legs’, you need to “learn new ways to control the body to cope with the fact that the ‘ground’ is moving underneath you”, says Tom Stoffregen, a professor of kinesiology at the University of Minnesota. “Learning takes time, and during learning control will be suboptimal; you’ll be less physically stable than you'd like.” This temporary instability, Stoffregen believes, causes motion sickness.

Whichever of these two theories is right, they both assume a discord between what the body experiences, and what it considers to be normal. And here’s the bottom line: we still can’t predict who will get motion sickness, or when and where it might happen. 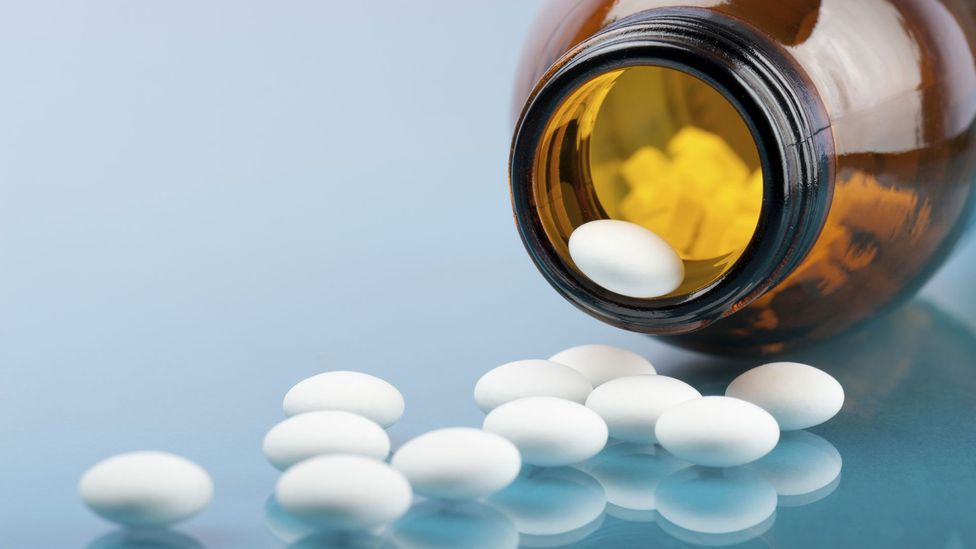 While some drugs can help treat symptoms, most of them come with side effects (Credit: Getty Images)

We are aware that it seems to be much more common in women than in men, and appears to be strongly hereditary, but that’s about it. We don’t even really know why the sensory conflict actually triggers vomiting; it is thought that some neural pathways activate the brain's vomiting centre, believed to be located in the medulla, part of the brain at the top of the spinal cord.

So how should we deal with motion sickness? There is no lack of treatments, but many at best result in a placebo effect, says Timothy Hain, a neurologist specialising in the interface between the ears and the brain, and professor emeritus at Northwestern University in Evanston, Illinois. Some wear wristbands with pressure pads, others swear by consuming ginger and peppermint tea to settle the nausea.

In terms of medication, science hasn’t really moved on much during the past few decades. “More effective methods for prevention and treatment are some distance away”, says Charles M. Oman, the director of the Man Vehicle Laboratory at the Massachusetts Institute of Technology.

Motion sickness seems to be very much hereditary

Anticholinergics, antihistamines, amphetamines and serotonin agents are still the most used drugs to treat the condition, says James Locke, a flight surgeon at Nasa’s Johnson Space Center in Houston. The drugs suppress vestibular feelings and other brain processes. “They do work, but they have side effects,” he says, such as sleepiness.

During his career, Locke put dozens of people into spinning chairs, and noticed that about 70% of participants would get sick, pretty much at exactly the same point on each ride. He found he could combat the problem by giving them scopolamine to prevent vomiting – and dextroamphetamine to deal with scopolamine-induced drowsiness. Giving the therapy to passengers on the ‘Vomit Comet’ — a Nasa aircraft that achieves a few seconds of zero gravity in the name of science – cut the rate of motion sickness from 70% to about 12%.

Other popular medications prescribed today are Ondansetron (which combats nausea and dizziness), Meclizine (an antihistamine that addresses dizziness and vertigo), Transderm scopolamine patches (for dizziness and vertigo – with the advantage that they don’t have to be swallowed and that they work continuously for three days), and Valium (a vestibular suppressant).

There are even drug-free solutions in the pipeline. In 2006, Nasa scientists decided to test an idea first suggested in 1981, that rapidly flashing strobe lights could lessen the effects of motion sickness. The researchers came up with goggles that mimicked a strobe effect to ‘freeze’ the moving visual scene on the retina. The lenses were made of LCD ‘shutters’ that rapidly switched from dark to clear, allowing four 10-millisecond ‘flashes’ of light to come through each second. The goggles seemed to help – the participants who wore them tolerated simulated motion sickness throughout the duration of the 30 minute study – those without glasses lasted on average 24 minutes.

And in 2013, psychologists Behrang Keshavarz at the Toronto Rehabilitation Institute and Heiko Hecht of the Johannes Gutenberg University of Mainz published a paper describing how pleasant music and odours helped ease the visually induced motion sickness that comes with wearing a virtual reality headset. 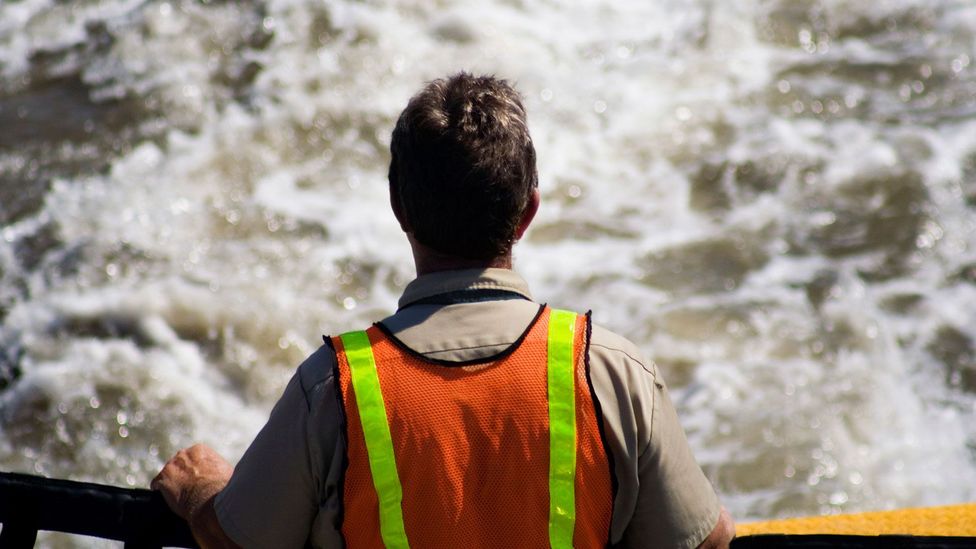 Sufferers of seasickness are often told to stare into the distant horizon (Credit: Getty Images)

Last year, a team led by Bethann Hromatka, a biomedical scientist at genetics company 23andMe looked across the entire human genome to see which genetic changes might increase a person's likelihood of becoming motion sick. The research, published in Human Molecular Genetics, found links between motion sickness and genes involved with balance, eye, ear, and cranial development. In other words: motion sickness seems to be very much hereditary.

Hromatka hopes that in future researchers may be able to identify specific risk factors, and even develop new therapies. But at the moment, simply getting a better night's sleep before travelling might help, she says. “Also, results from our study and other groups suggest that maintaining stable blood glucose levels might help relieve motion-induced gastrointestinal upset.” That’s why it’s advisable to sip clear carbonated drinks to help prevent nausea.

Get used to it?

Other tips are to always place yourself in a spot where your eyes see the same motion that your body and inner ears feel; for instance, it’s best to sit in the front seat of a car and focus on distant scenery, recommends Sujana Chandrasekhar, director of the Comprehensive Balance Center in New York. “In a plane, choose a seat above the wings where the motion is the least,” she continues. “Do not read while travelling if you are subject to motion sickness, and do not sit in a seat facing backwards.” Another more technical way of keeping motion sickness at bay is to project an artificial horizon line on glasses, head-up displays or aircraft equipment. 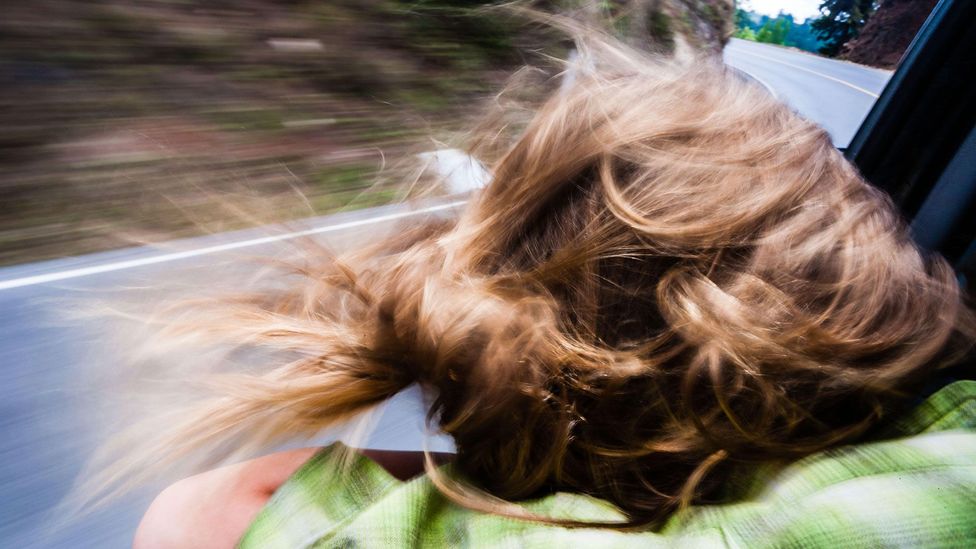 Feeling queasy in the back seat? Your parents, and not the winding roads, may be to blame... (Credit: Alamy)

But some think effective treatment is not about choosing the right seat, let alone taking drugs. Catherine Webb, a research psychologist with the US Army’s Aeromedical Research Laboratory in Fort Rucker, Alabama, believes that the key to successfully battling motion sickness is adaptation. Sam Puma, a physician and former military pilot and Nasa flight surgeon, agrees. He is in favour of exercises designed to generate mild motion sickness in an escalating pattern, controlled by the user. “We gradually increase, over a one to two-week period, the vigour and repetitions of very specific head, neck and upper torso exercises,” says Puma. “These exercises can boost a person's tolerance to higher levels, regardless of their current tolerance.”

And perhaps there’s something there – after all, sailors often adjust so well to the rocking of a ship that when they step ashore, they experience ‘mal de debarquement’, or ‘land-sickness’, and need time to adapt.

But that’s sailors – as for me, I know that I won’t try an aerotrim ever again, regardless of which medication or exercises are on offer.