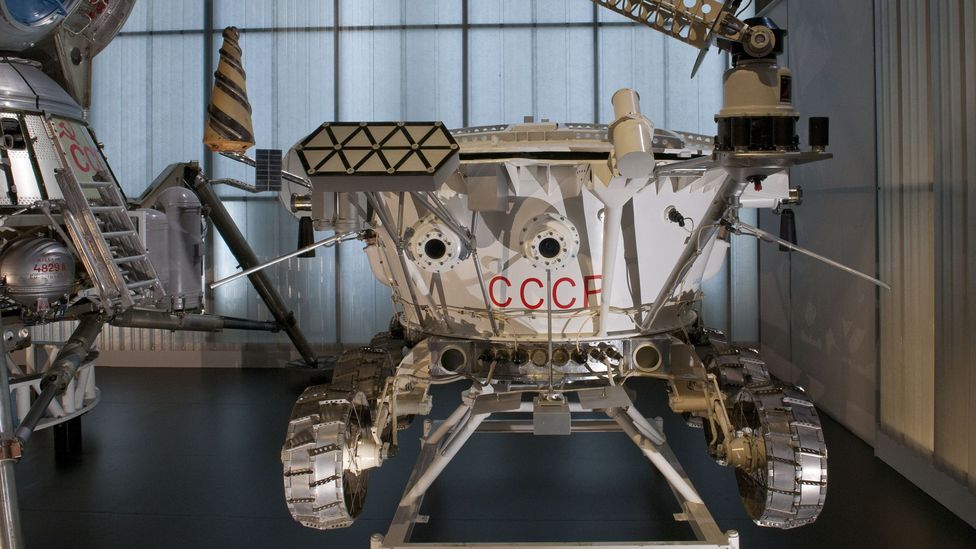 By Stephen Dowling 25th September 2015
It was the Soviets who put the first satellite, dog, woman and man into space. As London’s Science Museum salutes their legacy with a major exhibition, we ask the curator to pick eight objects – big and small – that help define Russia’s reach for the stars. 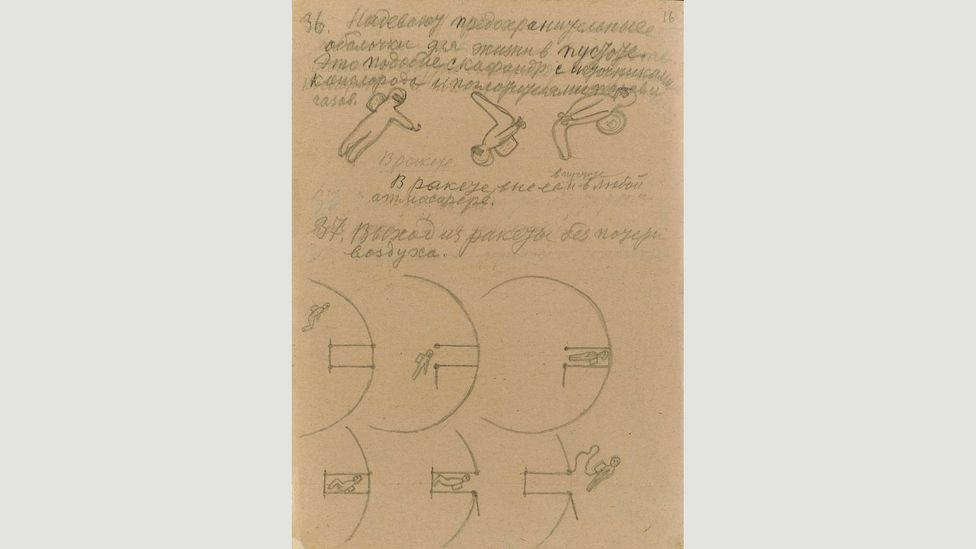 “Tsiolkovsky, regarded as the father of Russian rocketry, sketched his stunning visions of space flight while employed as a consultant for Vasilii Zhuravlev’s 1936 science fiction film Cosmic Journey,” says the [Cosmonauts exhibition](http://www.sciencemuseum.org.uk/visitmuseum/Plan_your_visit/exhibitions/cosmonauts.aspx)’s co-curator, Doug Millard. “They are remarkably prescient of the early space missions, anticipating the effects of weightlessness decades before the first cosmonauts and astronauts were experiencing them for real. This page depicts a cosmonaut exiting a spacecraft via an airlock, not unlike the spacewalk performed by Alexei Leonov in 1965 from Voskod 2.” (Credit: State Museum and Exhibition Center ROSIZO) 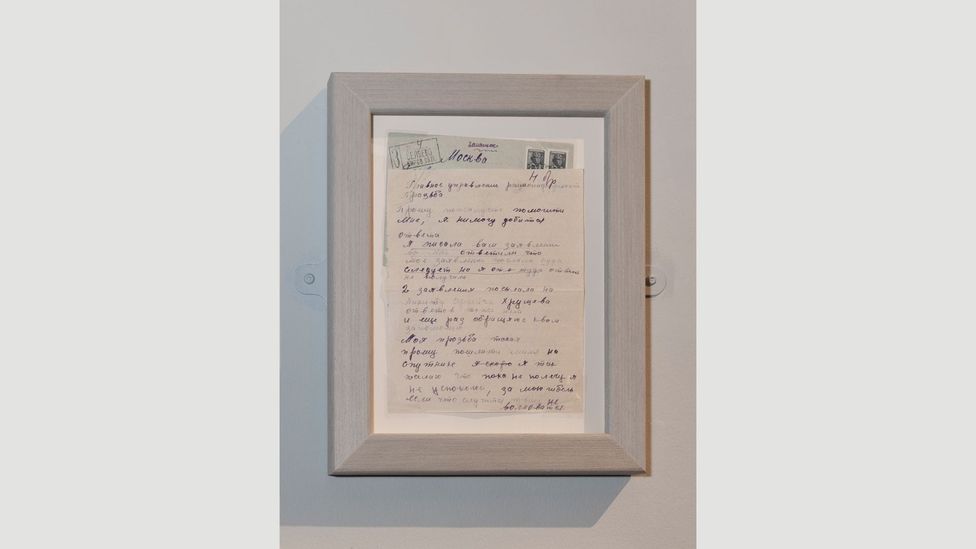 A letter from Maria Trofimova

The launch of Sputnik 1 caused shockwaves around the world; in the Soviet Union it was a source of immense pride. “This letter was sent in 1959 to Radio Moscow by Maria Trofimova, an offer to put her into a Sputnik. It was something she felt was her duty to the state, and was the state’s duty to her. She knew she would not come back but was not afraid.” Trofimova was not a young girl; she was a 42-year-old collective farm worker. Despite her generous offer, none of the Sputnik spacecraft were launched with Trofimova inside. (Credit:Science Museum) 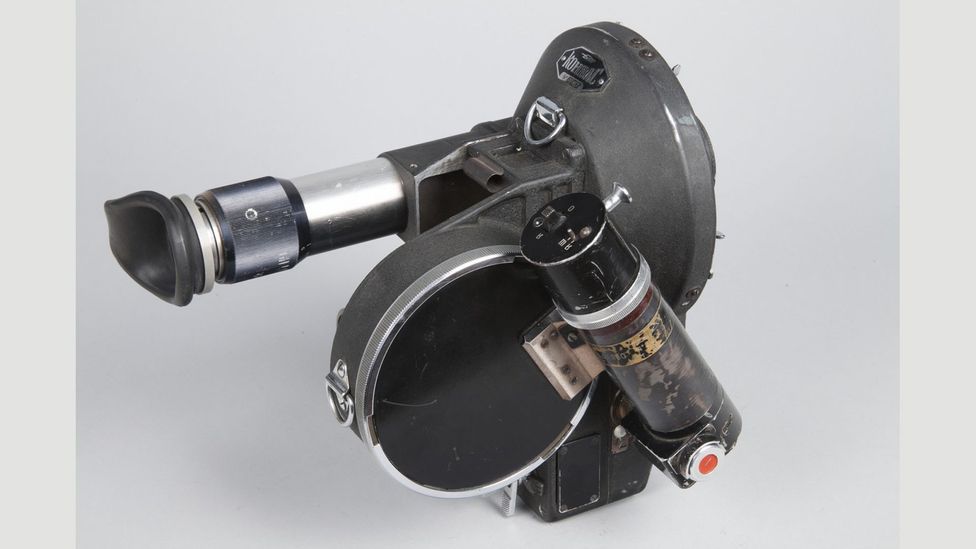 Cosmonaut Gherman Titov, who travelled into space in 1961, was the first person to spend more than a day in space, the first to sleep in space, and the first to suffer space sickness. He was also the first to take moving footage of the view from orbit, using this heavily modified Konvas Automat cine camera. “This camera took the first movies of planet Earth from orbit,” says Millard. (Credit: The State Polytechnic Museum) 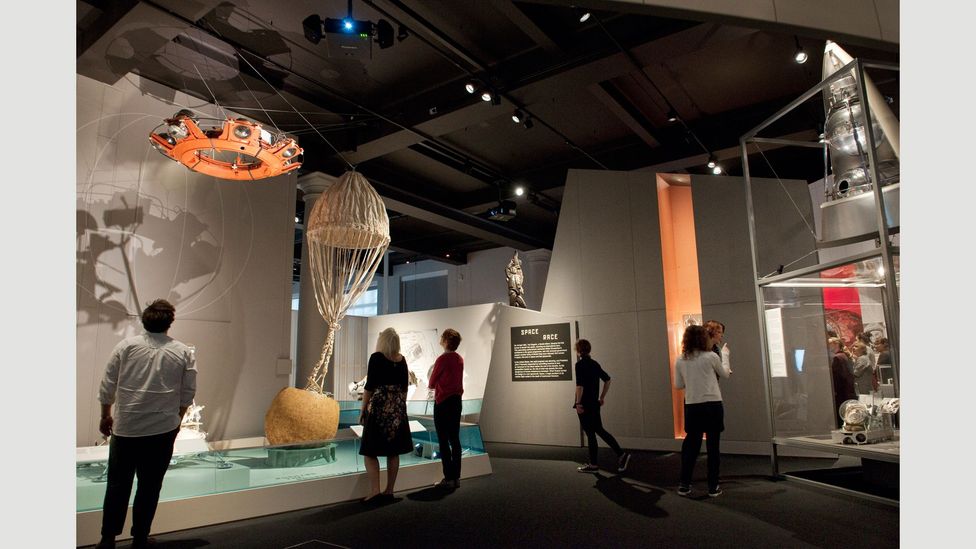 The Soviet space industry may not have made a landing on the Moon, but it continued to score a series of remarkable firsts as the space race continued, including the first landing on another planet – Venus – by a Venera probe. In the 1980s, another programme, Vega, made even more ambitious missions to Earth’s ‘sister planet’. “Vega 1 was an amazing unmanned mission that went to Venus – and then on to Halley’s Comet in the 1980s,” says Millard. “It landed a probe onto the surface of Venus, and a balloon that would be blown around Venus by the winds. And it was one of a flotilla of spacecraft that then intercepted Halley’s Comet. What’s amazing about this is that the scientists carried out these two tasks on the same mission.” (Credit: Science Museum) 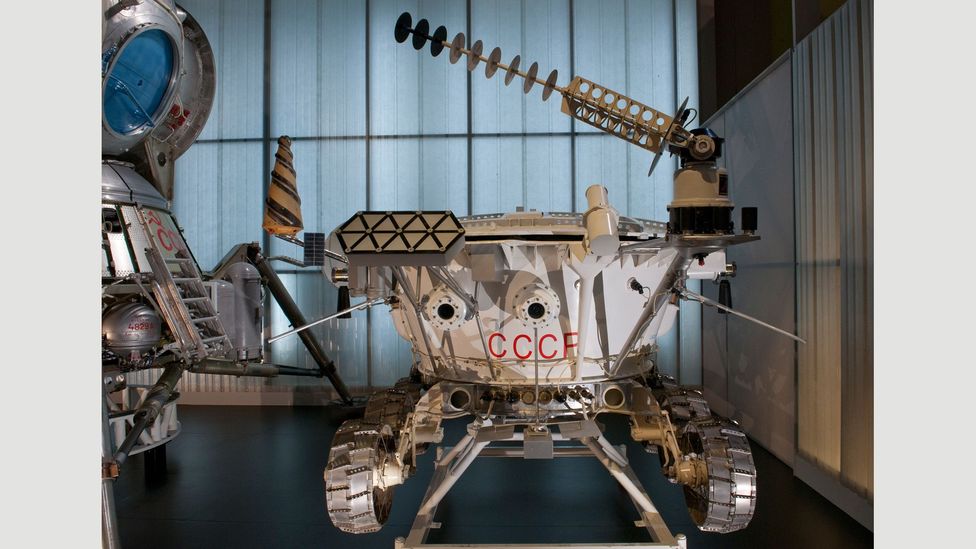 “The Lunokhod 1 here is an engineering model,” says Millard. “Lunokhod 1 landed on the Moon in 1970, and it was the first vehicle to travel on a surface off Earth. It was remote-controlled by a team of five technicians back in Moscow, but it was also meant to be part of the manned lunar landing programme. That didn’t happen, but Lunokhod 1 and 2 sent back lots of images of the lunar surface.” Though the rover no longer functions, it is still of use to space technicians more than 40 years later. “They’re inert but their laser reflector mirrors are still used to measure the distance from the Moon to Earth.” (Credit: Science Museum) 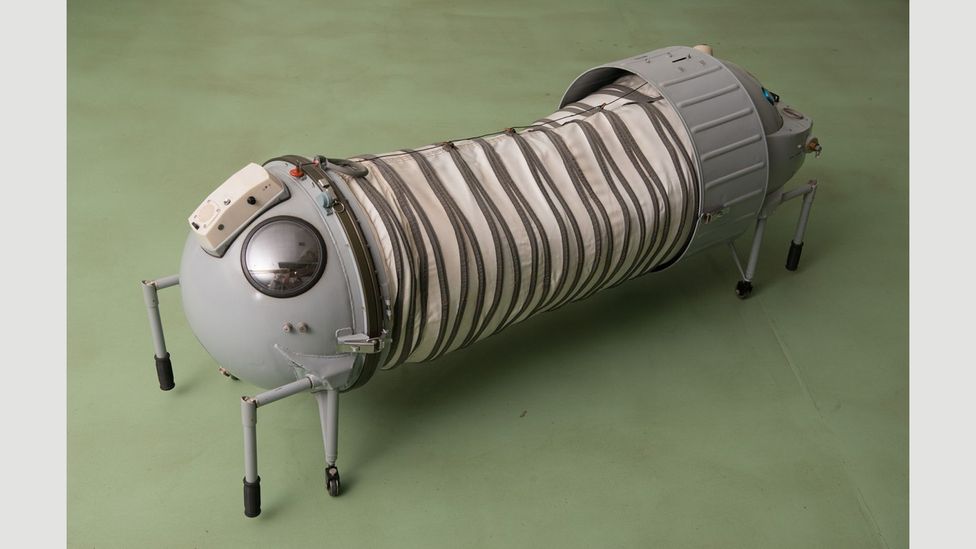 “This is a hyperbaric oxygenation chamber,” says Millard. “It looks like a long, caterpillar. This was meant to be used by pilots and combatants in the field. It would be used to rescue a pilot or trainee cosmonaut who was suffering from the bends; you flood the chamber with oxygen. And it also alleviates excessive bleeding, helping the body restrict the loss of blood.” (Credit: Research, Development & Production Enterprise Zvezda) 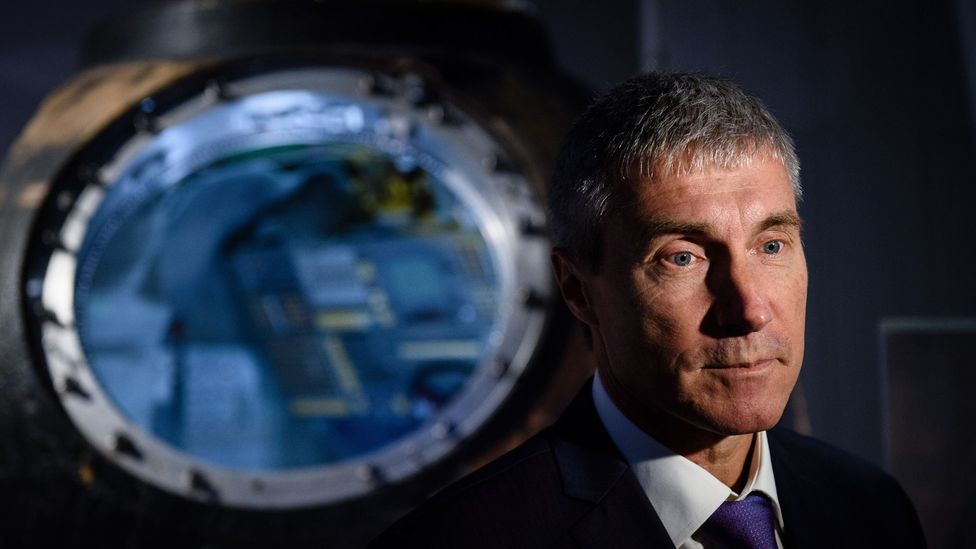 Cosmonaut Sergei Krikalev held the record for the most days in space – 803 – until very recently. And his marathon space record involves an epic case of forgetfulness involving a humble piece of cutlery. “He took the spoon up to the Mir space station,” says Millard. “He had it engraved by one of his team-mates with the aid of a dentist’s drill. And then he forgot to bring it back.” On his next mission to Mir, Krikalev located the errant instrument, and brought it back to Earth. “It’s one of the most well-travelled spoons in history,” says Millard. (Credit: Getty Images) 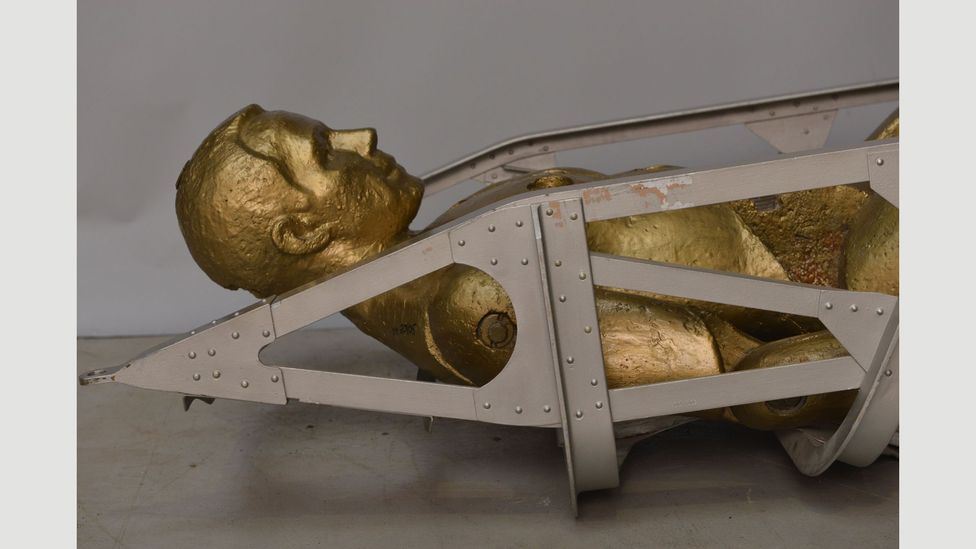 “This mannequin was used in 1969 to gauge the radiation levels around the Moon,” says Millard. It was carried on the Zond-7 spacecraft in a dummy run for a Soviet Moon landing. “It’s covered in sensors – and it carried the face of Yuri Gagarin. “It speaks on many levels. It talks about the future of space travel, and the cosmic thinking that we see reflected in the earliest part of the exhibition. It has a beautiful aspect of that famous Tsiolovsky quote: ‘The Earth is the cradle of humanity, but mankind cannot stay in the cradle forever.’ And it asks how much further we’ll go.” It’s added further pathos by carrying the face of Gagarin, who died in a jet crash in 1968. “It’s very poignant.” (Credit: State Museum and Exhibition Centre ROSIZO)