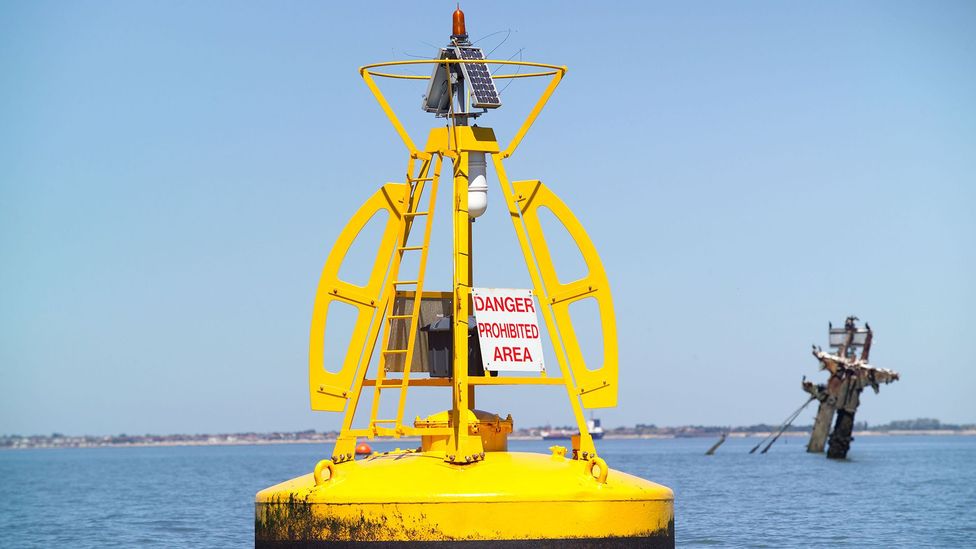 By Jon Excell 28th October 2015
The WWII-era SS Richard Montgomery sits just 1.5 miles from shore – and locals fear that its 1,400 tonnes of potent explosives could go off at any time. Jon Excell investigates.
T

Take a trip to the seaside town of Sheerness on Kent’s Isle of Sheppey and a curious sight awaits you: a giant mural featuring a miserable looking mermaid – hand on TNT detonation plunger – poised to obliterate a shipwreck in the sea behind her. “Welcome to Sheerness. You’ll have a blast!” reads the accompanying sign. 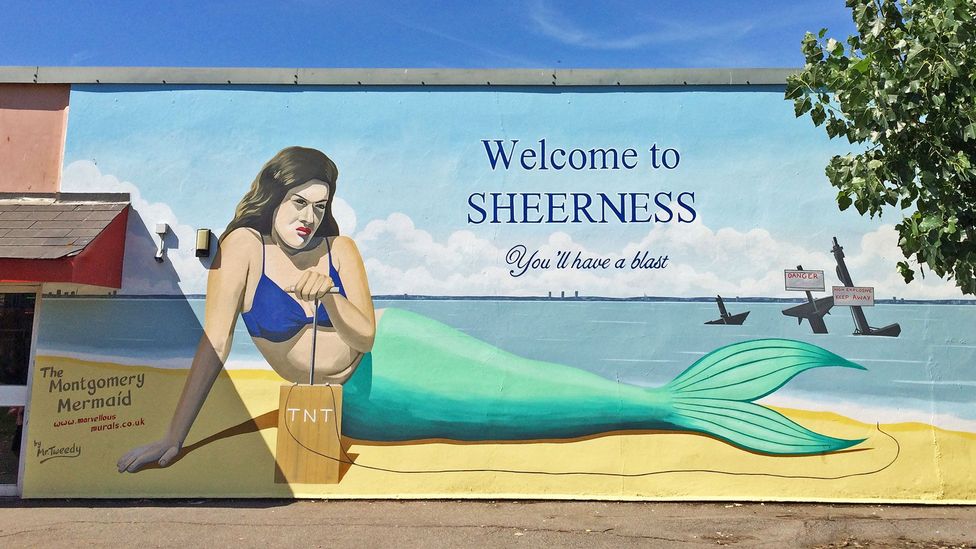 'Welcome to Sheerness. You’ll have a blast!', reads the sign welcoming visitors to the town (Credit: Andy Hebden)

To visitors unfamiliar with the hazard lurking in the waters just beyond the town’s sea wall, a terrorist mermaid is an undeniably bizarre piece of public art.

But to locals, she’s a chilling reminder of the wartime relic that some believe threatens the town and the lives of its inhabitants: the wreck of WWII-era ammunition ship the SS Richard Montgomery.

The ship lies just 1.5 miles (2.4km) from shore in the mouth of the bustling Thames estuary. Clearly visible from the land – its rusting masts rising ominously from the water – the sunken vessel contains disturbing cargo: 1,400 tonnes of high explosives which many fear could go off at any time, potentially causing one of the most devastating non-nuclear peace-time explosions ever seen. 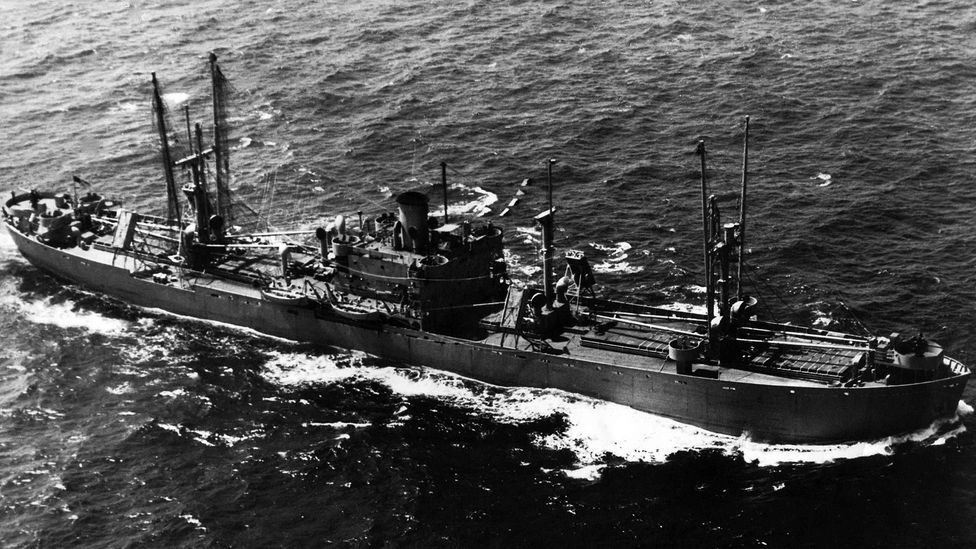 Known semi-affectionately to locals as the “Monty”, the 441ft-long (134m) vessel was a US Liberty ship, a type of cargo ship used during World War II. It arrived off Britain’s coast in August 1944 carrying munitions to help the war effort. On 20 August, while waiting to join a convoy across the channel to France, harsh weather caused the ship to drag anchor and founder on a sand bank.

As the tide receded the vessel was left stranded. The hull’s welded plates began to crack and buckle under the weight of the explosives on board.

Local dockworkers hurriedly mounted a salvage operation. They managed to empty the rear half of the ship before finally abandoning it on 25 September, when the forward section flooded and the vessel snapped in half.

Wreck survey teams from the US and Royal Navy inspect the SS Montgomery (Credit: Colin Harvey)

Since then, no one has been aboard the ship – at least not officially. And without any surviving records of what actually was removed in 1944, it’s impossible to say precisely what cargo remains.

The ship likely contains a staggering assortment of more than 9,000 US-made explosives

However, estimates paint a worrying picture. According to a survey carried out in 2000 by the UK government’s Maritime and Coastguard Agency (MCA), the ship likely contains a staggering assortment of more than 9,000 US-made explosives.

These include 286 giant 2,000lb ‘blockbuster’ bombs, 4,439 1,000lb devices and – perhaps most worryingly of all – more than 2,500 cluster bombs. Unlike most of the other items on board, cluster bombs would have been transported with their fuses in place, leaving them more prone to detonation.

It seems astonishing that such hazardous cargo was abandoned so close to civilisation and in the middle of the one of the UK’s busiest shipping lanes. But in the final stages of the war, the wreck’s recovery wasn’t a priority.

In the decades that followed, authorities considered non-intervention to be the safest course of action. That became particularly true when a 1967 attempt to clear the Kielce – a smaller wrecked munitions vessel almost four miles (6.4km) out to sea – triggered an explosion that measured 4.5 on the Richter scale and damaged property in nearby Folkestone, though no injuries were reported.

“Expert advice has always been that the munitions are likely to be stable if left undisturbed,” says the MCA’s Receiver of the Wreck Alison Kentuck, who oversees management of the SS Richard Montgomery, including arranging detailed annual surveys of the site (see box out). “If you go and disturb them, you’re increasing the risk factor.” 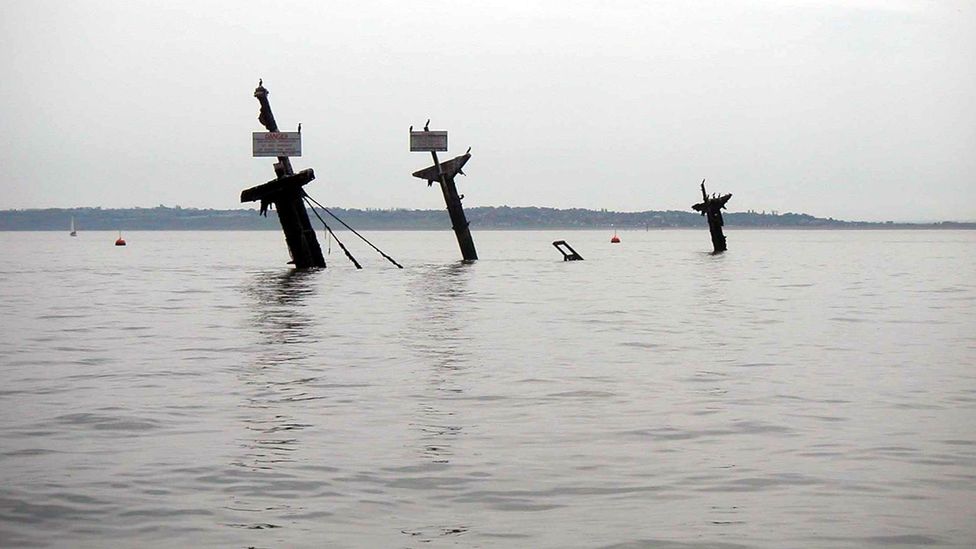 Most agree that the bombs are relatively safe as long as they aren’t exposed to sudden shock, friction or heat. But recent MCA surveys confirm the wreck is gradually disintegrating. Its deterioration could lead to a sudden collapse that triggers the sympathetic detonation of some, if not all, of the remaining explosives.

The explosion would level Sheerness, and a 30 or 40ft wave would breach sea defences – Colin Harvey

If this happened, the consequences could be catastrophic. Some analyses – as reported in the New Scientist in 2004 – suggest that spontaneous detonation of the entire cargo would hurl a column of debris up to 1.8 miles (three kilometres) into the air, send a tsunami barrelling up the Thames and cause a shock wave that would damage buildings for miles around, including the liquid gas containers on the nearby Isle of Grain.

It’s a scenario that keeps many, including local historian Colin Harvey, awake at night. “The remit area for the explosion would be from Margate to the centre of London,” he says. “It would level Sheerness, and a 30 or 40ft wave would breach sea defences. Sheppey’s got a population of 25,000 people. Where would they go?”

But not everyone shares this apocalyptic view.

Dave Welch is a former Royal Navy bomb disposal expert who now runs Ramora UK, an EOD (Explosive Ordnance Disposal) consultancy which carries out a large amount of work on underwater ordnance. Welch, who advised the government on the SS Richard Montgomery’s munitions, says he’s unconvinced by some of the wilder predictions.

“The idea that if one item goes ‘bang’ then everything will is, I think, pretty unlikely,” he says. “Unless you’ve got intimate contact between two munitions subsurface, you’ll rarely cause the other to detonate, because water is a very good mitigator. If you’ve got a 1,000lb bomb two metres from another 1,000lb bomb, the other one won’t go bang. I know that for a fact – I did it last Tuesday.” 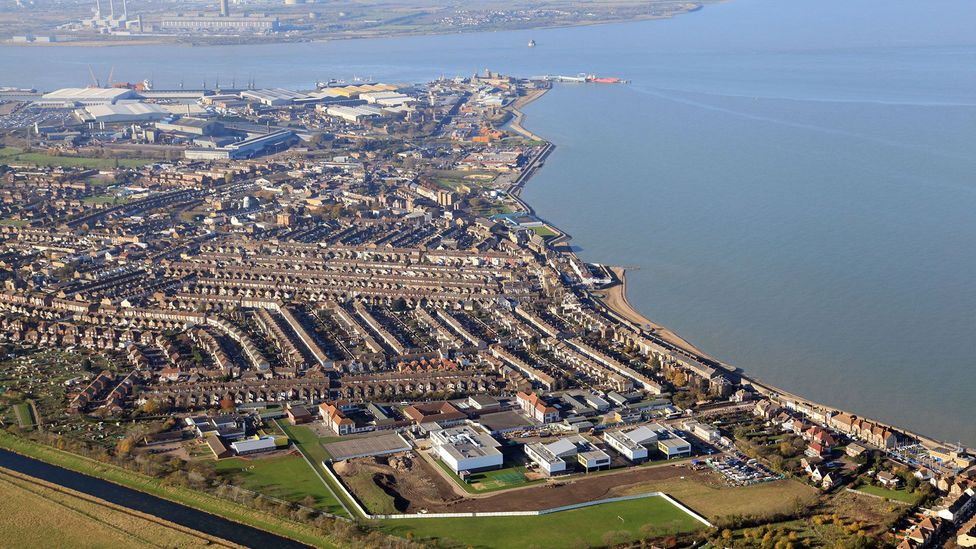 If the ship's bombs go off, the town of Sheerness, pictured here, could be levelled (Credit: APS (UK)/Alamy Stock Photo)

He suggests that a more likely – albeit only marginally less terrifying – scenario is the detonation of a large item initiating a ripple effect through the vessel, which would send munitions flying through the air and scatter hazardous items over a wide area.

And while the likeliest trigger for such an event is the natural disintegration of the vessel, that’s not the only potential cause.

One concern is that the vessel could be struck by one of the many boats that pass close by every day. And although the wreck is surrounded by an 875-yard (800m) exclusion zone and monitored 24 hours a day by the Medway Ports authority, there are concerns that it’s not as well protected as the authorities claim. Indeed, Harvey says there have been at least 22 near-misses over the last few decades. In one particularly dicey incident in May 1980, a Danish fuel tanker strayed off course in poor weather and had to take last-minute evasive action to avoid hitting the wreck.

More recently, a paddle-boarder provoked an outcry when he posted a photo of himself on Facebook leaning against one of the vessel’s masts.

Although the wreck is surrounded by an exclusion zone, there are concerns that it’s not as well protected as the authorities claim (Chris Laurens/Alamy Stock Photo)

Another fear is that terrorists could attack the ship – a concern that, according to Harvey, prompted highly visible armed patrols around the wreck site during the London 2012 Olympics.

But the biggest risk factor is undoubtedly the state of the ship itself. “The items aren’t the ticking time bomb, the wreck is,” says Welch. “It’s the fact that they’re inside a ship which is slowly decaying that could have the potential of causing enough energy going in them to cause them to detonate.”

So what are the options?

Over the years, a variety of suggestions have been made, ranging from the clumsily dangerous option of simply towing the vessel to deeper water to more complex civil engineering solutions involving entombing the wreck in some kind of giant sarcophagus.

But according to Welch, careful removal of the munitions is the only serious option. He envisages the use of divers along with construction techniques to improve visibility around the wreck and ensure that operators aren’t constantly battling the wreck-site’s high tidal range.

There are lots of examples of wrecks being emptied. What makes the Montgomery very difficult is where it is – Dave Welch

The project would, Welch says, cost tens of millions of pounds. “There are lots of examples of wrecks being emptied,” he says. “The thing that makes this different is that it’s a much larger payload and the vessel is slowly crumbling away. What makes it very difficult is where it is.”

Still, Welch and a number of other operators are confident that they could safely clear the wreck site. But there are few signs that anyone will be given the go-ahead any time soon.

One thing that might hasten a solution would be a major infrastructure project, like London Mayor Boris Johnson’s proposal for a new airport in the Thames Estuary: the Airport Commission said that before it could be built, the wreck would have to be moved. But with ‘Boris Island’ looking increasingly unlikely, at least for now, we could be in for a long wait – and most seem to agree that the longer the vessel is left, the harder it will be to deal with. 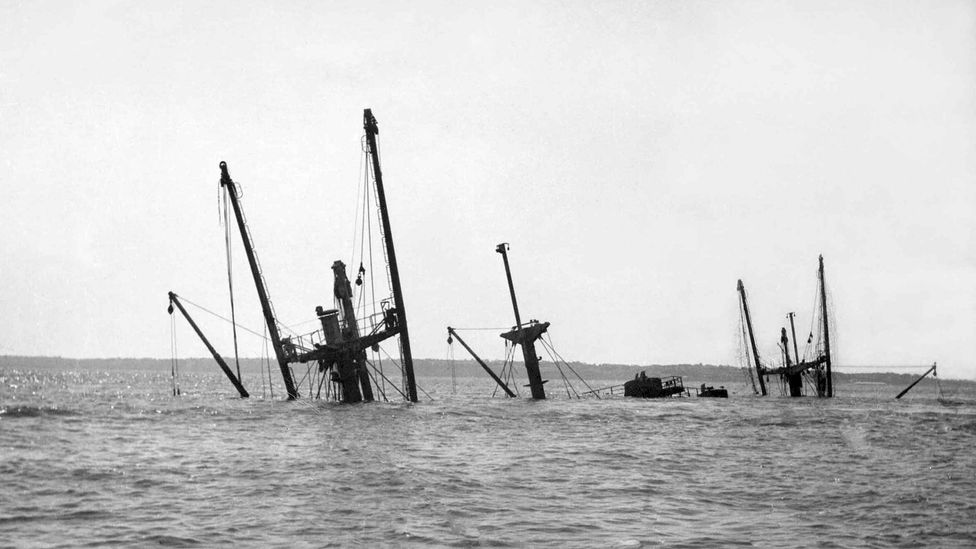 The wreck of the SS Richard Montgomery, pictured in 1966 (Credit: Colin Harvey)

“We can’t continue just leaving the wreck to fall apart,” says Welch. “Somebody at some point in the next five to 10 years is going to have a very difficult decision to make and I would say the sooner it’s made, the easier and cheaper it will be as a solution.”

It’s hard to predict what will happen next to the SS Richard Montgomery. It’s possible that nothing will happen – that the speculation will continue and that today’s generation will pass this volatile baton on to the next, relieved that it hasn’t blown up on their watch.

But for the people of Sheerness there is always the terrifying possibility, however remote, that one day soon, decades of inaction will come back to haunt us.

Jon Excell is the Editor of The Engineer.