A stunning 360-degree video recorded inside a US Navy Blue Angel display aircraft raises a question: why do armed forces pilots need these skills?

They got their name from a New York nightclub. Their colours, though, are the official hues of the US Navy. Death-defying feats have been performed by the Blue Angels at airshows since the 1940s – and you can experience what it’s like to be inside the cockpit in a nail-biting interactive 360-degree video recorded by USA Today above.

Like the British Royal Air Force’s Red Arrows or the US Air Force’s Thunderbirds, these pilots often make daring manoeuvres never used in combat. As you can see in the footage, the Blue Angels’ aircraft may be as close as 45cm (18 inches) to each other – less than an arm’s length. And they’re travelling at hundreds of miles an hour.

So, do armed forces actually benefit militarily from having pilots who can carry out these stunts?

The answer is “no” and “yes”. Aerobatics generally are a part of military training because it’s important for pilots to be able to manoeuvre their aircraft with great care, hone their skills and learn a large range of tricks to evade threats. When pilots need to perform challenging moves in combat, such training ensures that they are physically able to handle the intense forces exert on them.

Pilots train to clench their muscles at the right moments, to prevent blacking out

Blue Angels pilots do, also, have to keep extremely fit and mentally sharp to perform their stunts. Not least because, unlike pilots in combat, the team doesn’t wear G-suits which help prevent blackouts on sharp turns. This is because the inflation and deflation of the suits (which puts pressure on the pilots’ legs to prevent blood pooling in their lower bodies) would interfere with the highly sensitive control stick positioned between their legs.

Instead, the Blue Angels pilots train to clench their muscles at the right moments, before going into a demanding manoeuvre, in order to prevent blacking out. 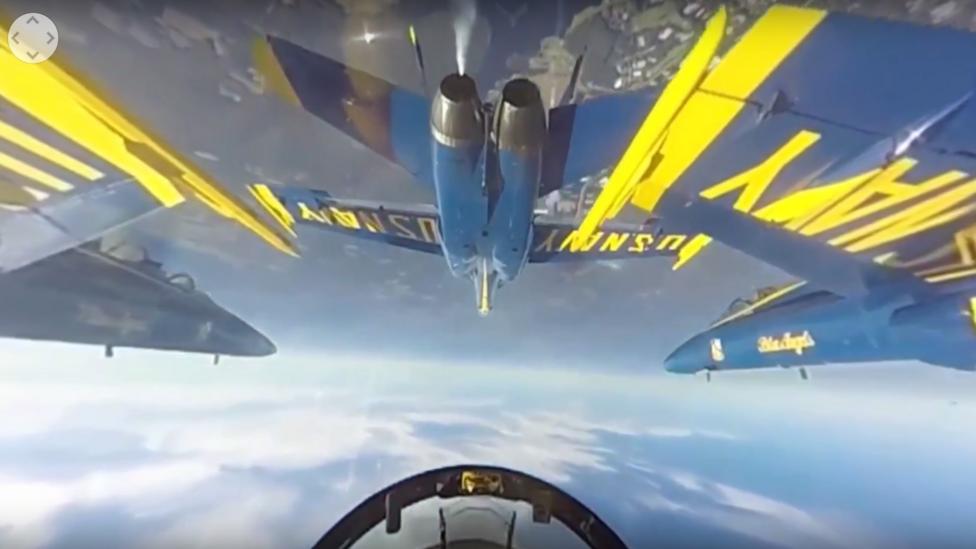 This image, from the film you can see above, shows off the technical prowess of the Blue Angels display team (Credit: USA Today)

The planes they fly, F/A-18 Hornets, are representative of the aircraft flown by US Navy pilots, and were chosen because they have several aerodynamic features which makes them easier to control in the air. One example is the "leading edge extension" features on the planes' wings, travelling along the body towards the nose. This helps to increase lift and stability during high angles of attack.

The original F/A-18s have also been modified, however. For one thing, they’re covered in a high-gloss paint which reduces drag, and each control stick has been mounted with a spring that constantly pushes it. The pilots must constantly resist that force, but doing so means they can make more sensitive adjustments and carry out very precise exercises.

Last but not least, the purpose of any flight display team is to showcase military might. It’s seen as a good way to engage the public and inspire young people to think about becoming pilots one day.