Loading
The Secret World Of...
Why do we still not know what’s inside the pyramids?
Share using EmailShare on TwitterShare on FacebookShare on Linkedin 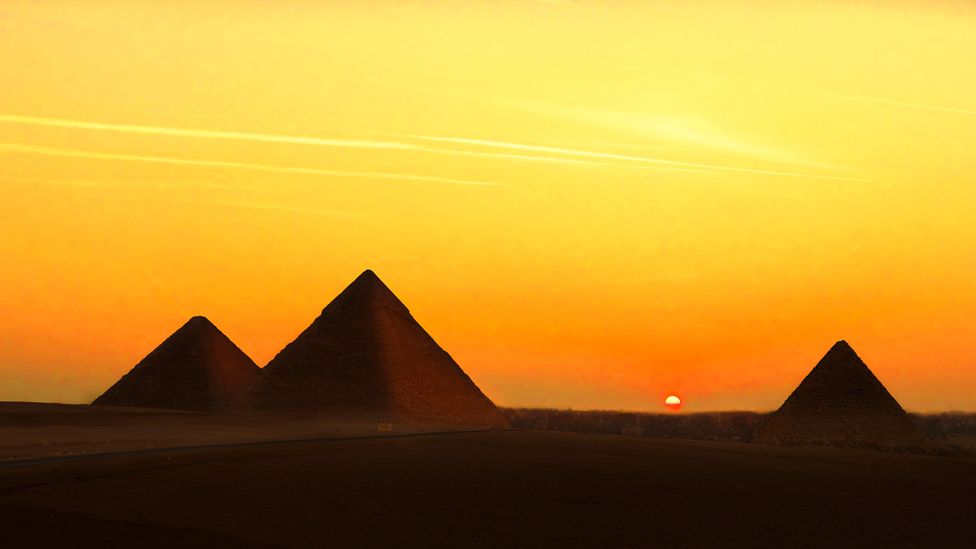 By Chris Baraniuk 13th November 2015
With their hidden chambers, the pyramids of Giza have yet to reveal all their secrets – how is that possible?

“At last have made wonderful discovery in Valley; a magnificent tomb with seals intact recovered same for your arrival congratulations,” scribbled Howard Carter in a hurriedly written message to George Herbert, encouraging him to join him on the expedition. It was 1922 and Carter had just stumbled on the exquisitely preserved tomb of Egyptian pharaoh Tutankhamun.

The discovery of King Tut’s treasures instantly became a worldwide sensation. And although Tutankhamun wasn’t himself buried in a pyramid, the knowledge that other pharaohs were has led many to wonder what the undiscovered chambers inside the great structures might hold. But despite the fact that they’ve been standing in the desert for millennia, we still don’t really know much about the pyramids’ interiors.

Despite the fact that they’ve been standing in the desert for millennia, we still don’t really know much about the pyramids’ interiors

Recently, US presidential candidate Ben Carson commented on his theory that the pyramids were actually primarily used for storing grain, much to the consternation of the US media. Why do pyramid mysteries and alternative theories persist even now? And why have we never explored them fully? 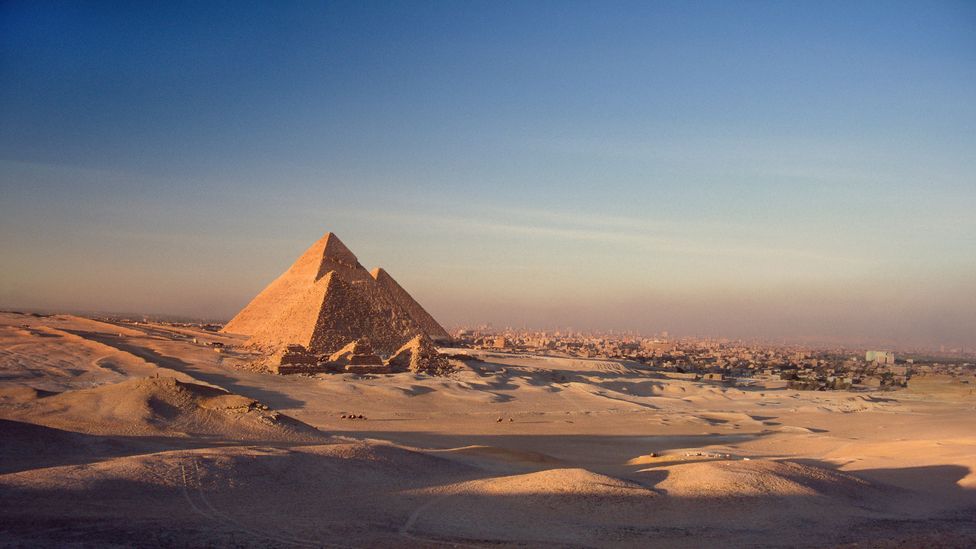 The pyramids are so important that any suggestion of breaking into internal tunnels or chambers forcibly would be seen as inappropriate and irresponsible (Credit: Getty Images)

For one thing, the pyramids are structures of outstanding archaeological importance. Indeed, they are so significant – from their complex designs to the hieroglyphs and artifacts found inside them – that any suggestion of breaking into internal tunnels or chambers forcibly would be seen as inappropriate and irresponsible.

Modern archaeological practice is concerned with “making sure we’re not harming the heritage that we’re trying to understand”, explains Alice Stevenson at University College London’s Petrie Museum of Egyptian Archaeology. For example, CyArk – a non-profit organisation – recently began to digitally preserve over 500 world heritage sites, from the Brandenburg Gate to the Ziggurat of Ur in Iraq using non-invasive lasers. Their technology will capture 3D images without the need to lay a finger on them.

But Stevenson also says that counter-theories about the pyramids actually being huge grain stores are not helpful.

“Archaeologists have in fact found grain silos in Egypt, they’re well known to us and they look nothing like pyramids,” she says. Egyptian officials have also chimed in recently to refute Carson’s ideas.

But that still leaves the question of what we know about the pyramids’ interiors. Take the Great Pyramid itself, in Giza. Built more than 3,000 years ago out of more than two million blocks of stone, the Great Pyramid is the biggest ancient pyramid in the world and today stands at 139m (450ft) tall, though it would have been slightly taller when first constructed. That’s a big building. But we only have access to a few chambers inside it, such as the great gallery and the king’s and queen’s chambers.

Recently, an international team of architects and scientists used infrared thermography to detect unexpected temperature differences in the stones of the Great Pyramid. 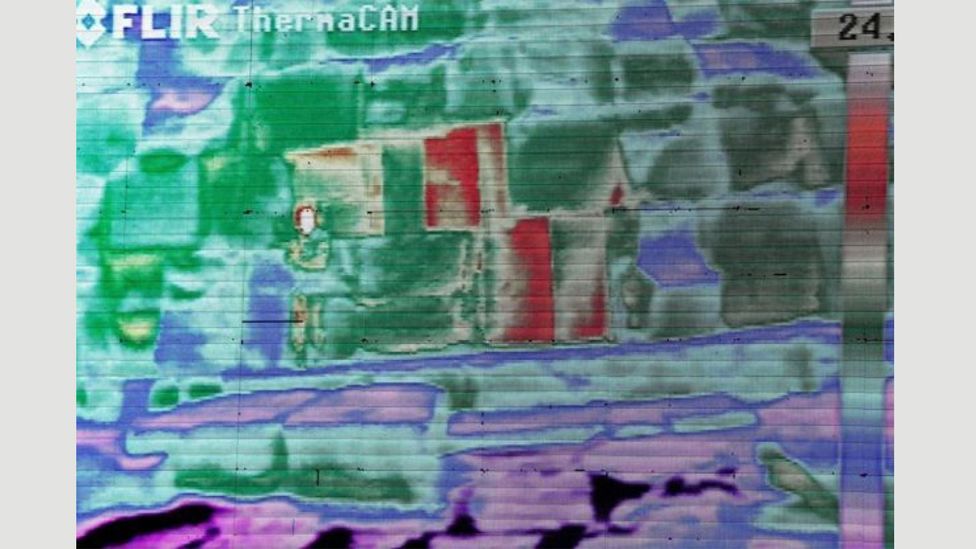 This has, perhaps, raised more questions than answers. Warmer temperatures on certain stones detected as the sun rises and sets could be an indicator of cavities or tunnels where airflow is present. However, there’s no easy way of knowing - the scientists involved in the project are under strict orders not to make invasive excavations. Either way, National Geographic reports that the Egyptian authorities are already interested in the idea of marketing tourist access to any chambers that might be found.

It’s something that would have to be orchestrated responsibly, but Stevenson says she understands why there might be interest in the idea. “I think it’s important for Egyptian tourism,” she comments, adding, “and I can understand that they would want to make the most of opportunities to exhibit wonders of the ancient world.”

Scanning and sensing technologies are likely to be the main tools for pyramid investigators in years to come. Infrared analysis from satellites in orbit around the earth has even helped locate buried pyramids, so there are plenty of examples now of how such technologies can enhance our understanding of these enigmatic structures.

But we might also be helped by robots. One chamber in the Great Pyramid not accessible by humans was, four years ago, explored with machines. A strange, tiny tunnel leads from the queen’s chamber to another blocked-off area. This has been known about since 2002 when a robot was used to drill through a stone “door” and film what was behind it. But the images didn’t show much. In 2011, a more flexible device was sent in and captured mysterious red hieroglyphs, which hadn’t been seen by human eyes for thousands of years. 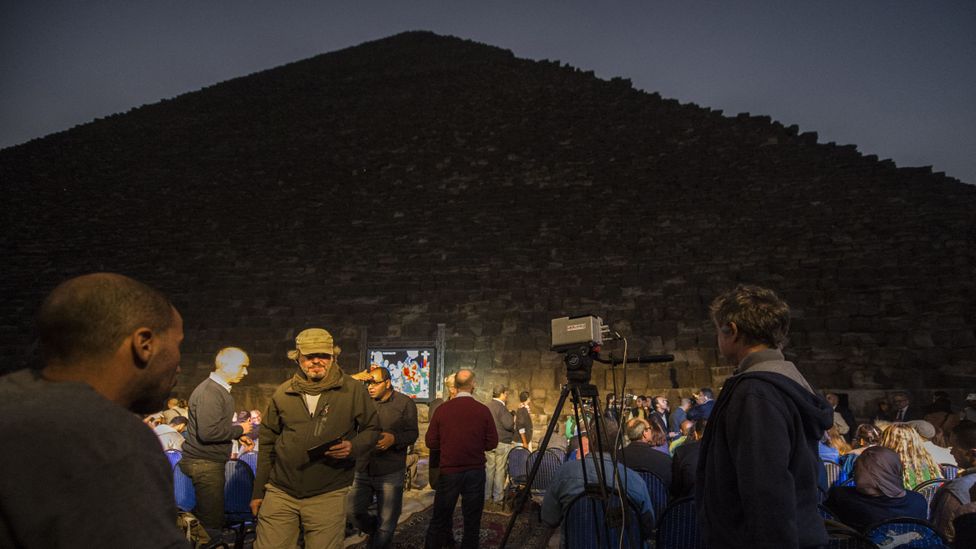 Researchers wait next to the great pyramids of Giza during an infrared thermography experiment to map the thermal footprint of the walls (Credit: Getty Images)

Even this high-tech expedition provided just a tantalising glimpse of what is in this long-lost chamber of the Great Pyramid. Until the scientific evidence can enlighten us, we will remain in the dark about what other rooms might or might not be inside the pyramids of Egypt. For Stevenson, that sense of mystery is something we’ve lived with for a long time. Indeed, it’s been part of our cultural relationship with the pyramids for hundreds of years.

“They’ve been a source of wonder for many many centuries,” she says. “I think that’s the nature of monuments - they transcend so many [generations].”

The Genius Behind
1If aliens exist, how would we know?
The Genius Behind
2The killer noise threatening ocean life
future
3How it feels to fly a stunt jet
The Secret World Of...
4Why do we still use old gadgets?
Around the BBC