Loading
The Secret World Of... | Transport
The secret codes you’re not meant to know
Share using EmailShare on TwitterShare on FacebookShare on Linkedin 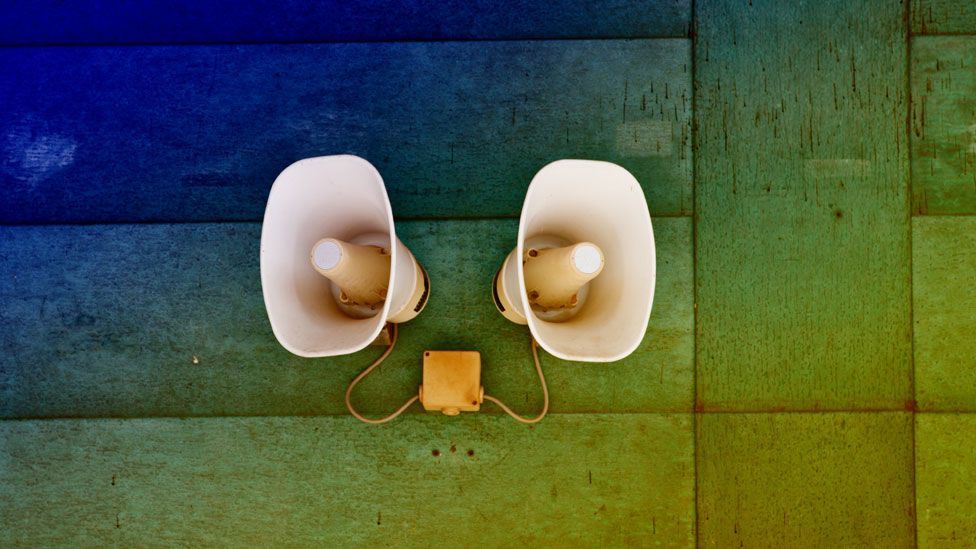 By Chris Baraniuk 17th December 2015
All over the world, there are hidden messages in city streets, hospitals, and on public transport. Why do they exist?

“Inspector Sands to the control room, please.” If you ever hear that at a British train station, don’t panic. But you might appreciate knowing that this is a codeword meant to inform staff that there is an emergency somewhere in the building. The idea is to avoid causing alarm among commuters, but still get the message out to those trained to deal with the problem.

The subject of secret codewords like this was raised this week on Reddit, and the discussion has attracted thousands of examples. But what codewords and signs are really out there in the wild?

A good place to start is hospital emergency codes. These are often colour-coded, and one health centre in Canada has published its list online. “Code red” announces a fire, “code white” indicates a violent person while “code black” means a bomb threat is active. Some phrases might simply be used euphemistically. It’s been reported that hospital staff sometimes refer to the morgue as “Rose Cottage”, in order to avoid upsetting relatives of a recently deceased patient.

Seafaring vessels have their own codewords. One of these, “Mr Skylight”, is a general emergency code that may be announced over the tannoy on a cruise ship. The crew used it during the sinking of the MS Estonia in 1994, which killed 852 people. As the disaster unfolded, a cryptic announcement was made: “Mr Skylight to Number One and Two” – indicating that crew were to shut watertight doors to seal parts of the hull. 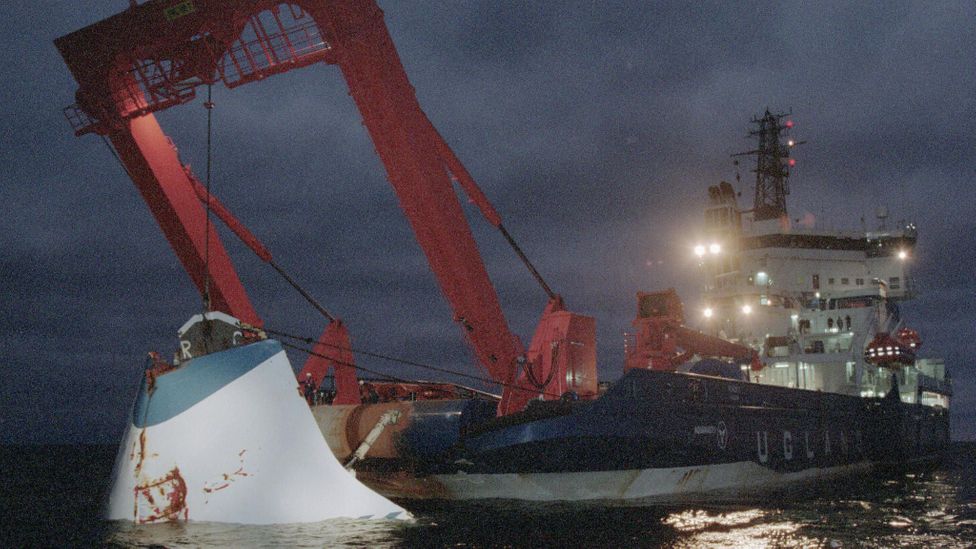 Before the ferry MS Estonia sank on 19 November 1994, the "Mr Skylight" audio code was broadcast throughout the ship (Credit: Getty Images)

“I can see very good reasons for having these codes,” says Paul Baker, a linguist at the University of Lancaster. “It may be that people are unsure when they’re giving the code so there’s no point upsetting [members of the public].”

It’s not just institutions and services that come up with codewords for things, though. Many contributors to the Reddit thread give examples from their own lives – such as retail workers who came up with specific knowing phrases to communicate special messages to staff. Several users gave the example of “Pebkac”, a derogatory acronym used by IT specialists to refer to certain individuals reporting a fault with their computer. It stands for, “Problem Exists Between Keyboard and Chair”.

Not all codes are alphanumeric. Some are visual, intended to be hidden in plain sight

There are lots of examples of these phrases in specific communities. BBC Trending recently reported on a special phrase used by scientists online to share copies of journal articles – “I can haz PDF”, a riff on the popular “I can haz cheezburger” meme.

And online daters might want to use their profiles to alert potential partners to the fact that they have a sexually transmitted infection, but to do so discreetly. There’s a codeword for that, too: 437737. On a telephone dialing pad with letters associated with numbers, the number spells out “herpes”.

Not all codes are alphanumeric. Some are visual, intended to be hidden in plain sight. As BBC Future discovered earlier this year, many banknotes feature a specific pattern of dots called the EURion constellation, placed there to prevent people from photocopying money. Many copiers and scanners are programmed to spot it. 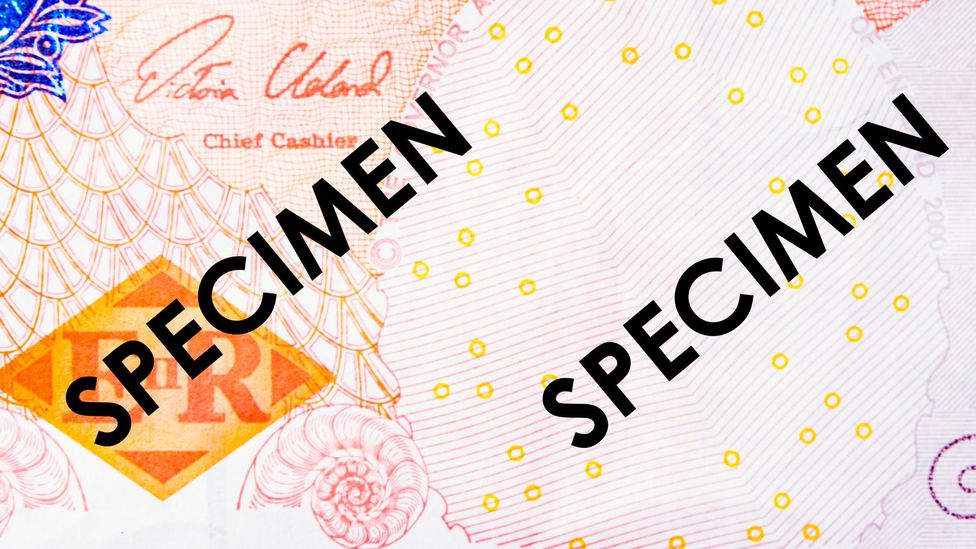 The ‘constellation’ of circles recurs across different currencies; it’s shown here, on the right, on a £10 note (Credit: BBCW)

Other visual codes are scrawled in the landscape around us. One surprising example is the series of signs known as “hoboglyphs” – a collection of symbols meant to provide information to travelling workers and homeless people. Among other things, these could indicate the quality of a nearby water source, or suggest whether the occupant of a house is friendly or not.

Graffiti gangs have also been known to develop esoteric glyphs which which they might scribble over the graffiti of rival groups. Discover magazine listed some examples in 2012. These included “SS” meaning “South Side” – a faction within a specific gang in Indianapolis; and a lazy red “X” over someone else’s graffiti – a visually jarring mark of disrespect. 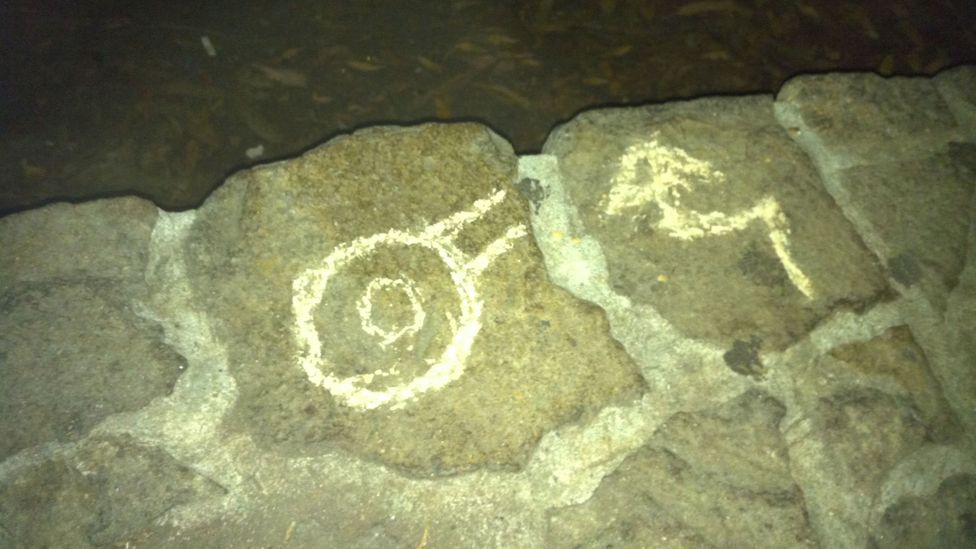 Known as “hoboglyphs”, these nondescript graffiti tags highlight safe areas, water sources and information about police between the homeless (Credit: Flickr/Everfalling/CC BY 2.0)

Amazingly, as Discover reported, software is now helping police decipher these symbols automatically. Such programs are even available as smartphone apps.

And finally, the spray-painted squiggles you see on pavements in towns and cities all over the world adhere to codes understood by construction workers and engineers. A BBC News Magazine report recently revealed the meaning of many of these in the UK, and pointed out that different colours related to different types of cable or pipe. Blue meant a water system while yellow indicated gas lines and green labelled CCTV or data wiring. 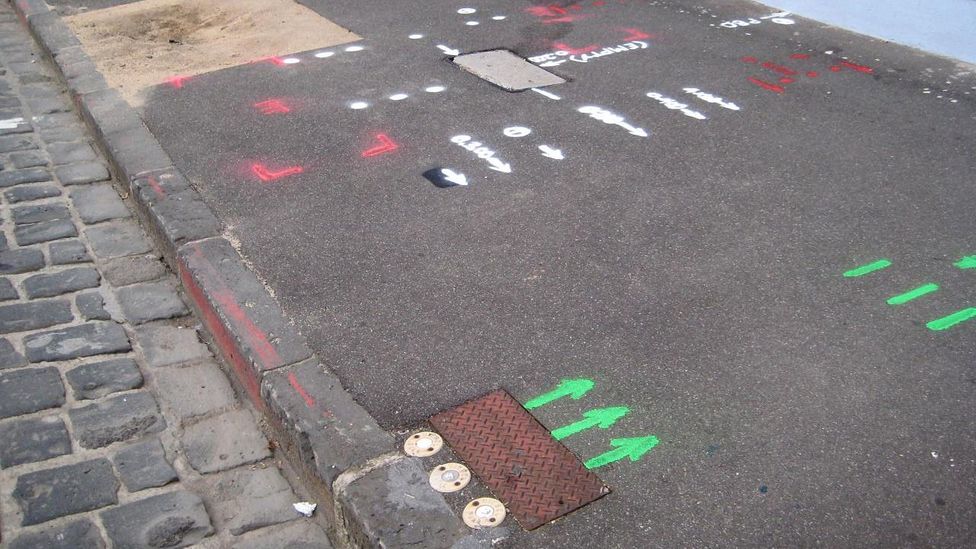 All of these codes have a purpose – to avoid causing panic, to transmit subtle signals in social groups, or to provide technical information quickly and easily. But once you know about them, it’s difficult to shake off that sense of intrigue and conspiracy – if only a conspiracy of knowledge. It’s no wonder online discussions about these codes are so popular.

“People don’t like secrets, do they?” says Baker. “There is a drive to have as much information as possible – we do live in the information age,” he adds.