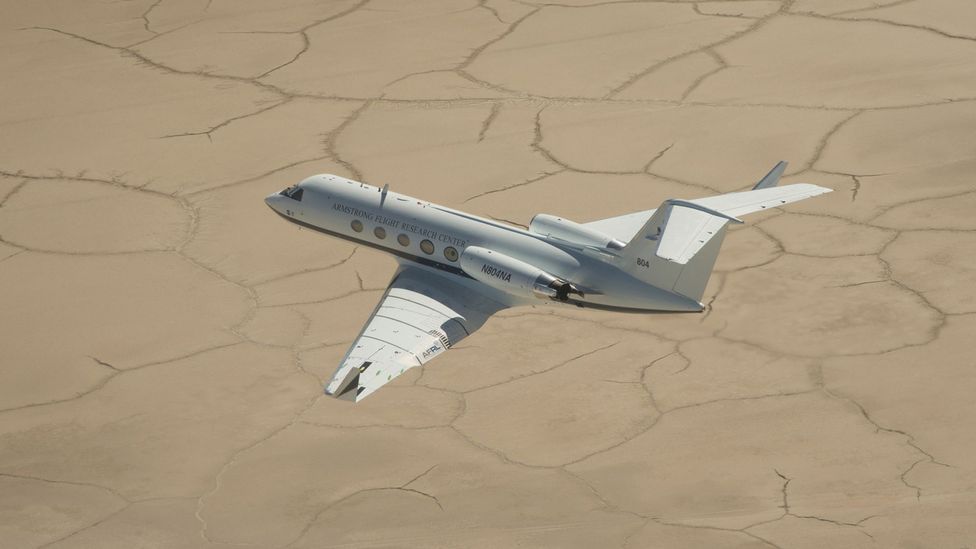 Over a century ago, the aviators who followed the Wright Brothers into the air suddenly turned away from building rickety wood-and-wire flying machines that physically warped the shape of their canvas wings – the design that had taken the Wrights into the sky.

Instead, airplane builders like the Wrights' arch-rival Glenn Curtiss used hinged flaps as ailerons (a movable surface on the wing which helps the aircraft turn), partly in an attempt to evade the Wrights' patent – but also because continually flexing a wooden wing could lead to structural failure.

Since then aviation has been wedded to these hinged control surface: rudders, elevators, flaps, ailerons and spoilers all work on this kind of principle, changing the shape of the wing or tail to help the aircraft move in a particular direction. But this design tradition could change as researchers in Europe and the US begin to harness today's tougher, stretchier materials and wing-warping motors to revisit the idea of the shape-shifting flight surfaces originally hatched by Orville and Wilbur Wright. 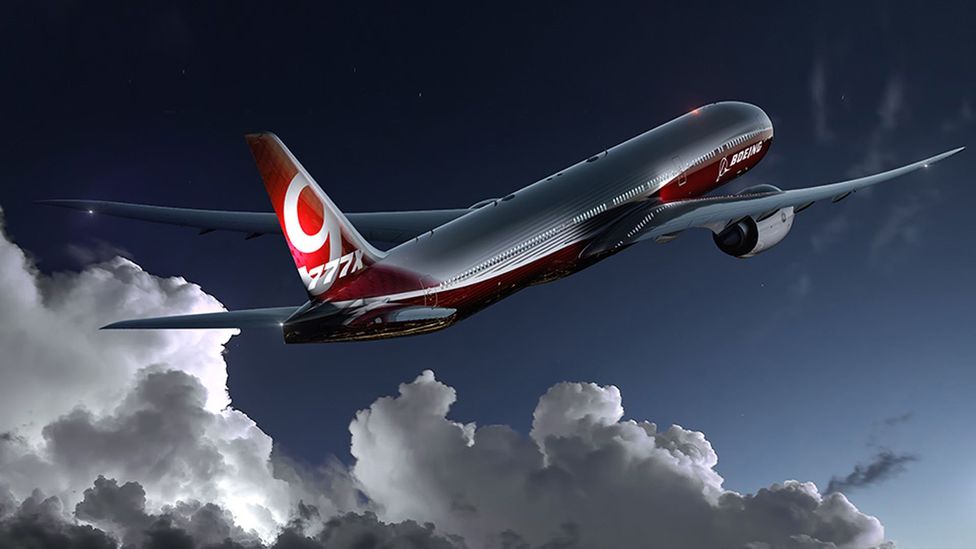 This movement is being driven by fuel efficiency demands as the world starts to confront climate change. With ever-greener aircraft sought to reduce the industry’s greenhouse gas emissions, it's hoped that novel wing designs and morphing mechanisms can help aircraft burn less fuel, says Piet-Christof Woelcken, an aviation structures engineer Airbus in Bremen, Germany. Better still, he says, if they can combine some control surfaces - such as flaps and ailerons - into a single, longer morphing one, it could make planes lighter, too.

That said, the first of the new fuel-efficient wing formats that passengers are going to see at their departure gates, on Boeing's forthcoming 777X airliner in 2020, will not be a morphing one per se - but it will change shape on landing. The 777X will have a 3.5m-long (11.5ft) wingtip that is folded up vertically when the plane is on the stand or taxiing, but which is locked down for flight.

Indeed, the 777X will be reminiscent of the kinds of planes used on an aircraft carrier, which fold their wings so more of them can fit inside the vessel's hangar. But the technology is new to civil aviation and large jetliners.

The idea is that the twin-engined plane can have an ultra-long, 71.8m (235.5ft) wingspan – which simulations suggest should offer a highly fuel-efficient cruise performance. But that wingspan reduces to 64.8m (210ft) when the wingtips are raised after landing. That's the same wingspan as today's Boeing 777s, so the new plane remains compatible with existing airport taxiway and gate sizes.

Adding moving wingtips presents considerable challenges, however: the foldable wingtips will need to be securely locked in flight – one wingtip floating loose, or stuck upright, could create a dangerous imbalance. Four years from launch, Boeing is saying little about how this will be done, but it told the veteran industry magazine, Aviation Week, that it is beginning tests that will test the system’s reliability and, for instance, how the inflight wingtip latching and locking system will cope safely with the kind of wear and tear expected in real-life use. 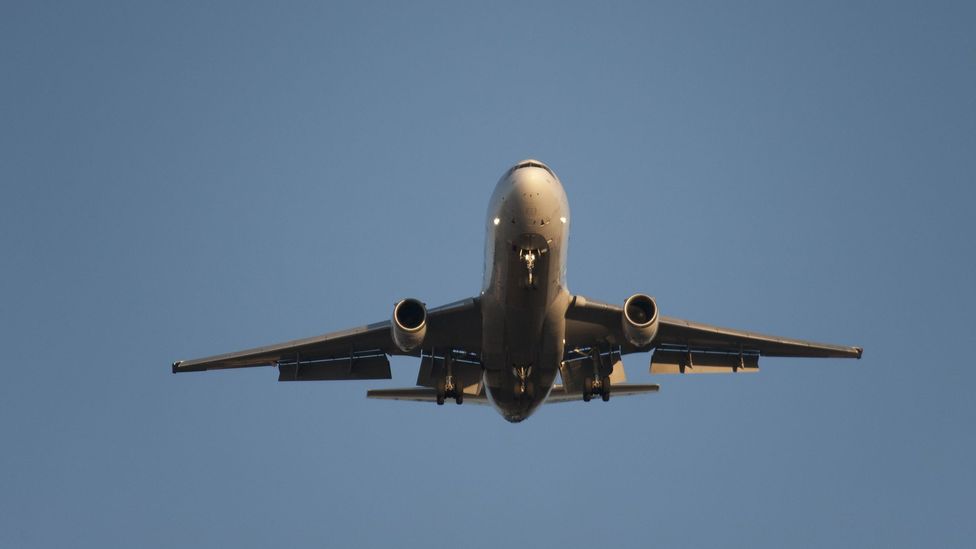 Flaps alter the wing so control is easier at slow speeds, but they create fuel-wasting drag and noise (Credit: Getty Images)

Adding to the challenge is the fact that the composite wing, plus its novel folding wingtip, will have to be designed to the same load limits as that of any civil aircraft. However, after its 787 aircraft proved in pre-launch structural tests that its composite wings could be bent higher than the top of the tailfin for 20 seconds, and did not break, the firm is confident in the robustness of the technology.

Sometime between 2025 and 2030, another more profound level of shape-changing may be used. Famously, Wilbur Wright was idly twisting a cardboard inner-tube box in his bicycle shop when he noticed how the deformation of the surface mimicked the profile of a pigeon's wing when it turned in the air.

By making the wooden frame supporting the wings of a biplane warp in the same way with a system of wires, the Wright's 1902 glider, and their 1903 powered Flyer, could be controlled in three dimensions.

Now two research projects are aiming to mimic this wing warping to different degrees: in Europe, in the EU's four-year Smart Aircraft Structures (Saristu) research program, led by Airbus of Toulouse, France; and in the US in a more ambitious project led by aerospace firm Flexsys of Ann Arbor, Michigan, in conjunction with Nasa and the Air Force Research Lab. (Read more on BBC Future's previous story on the Flexsys project) 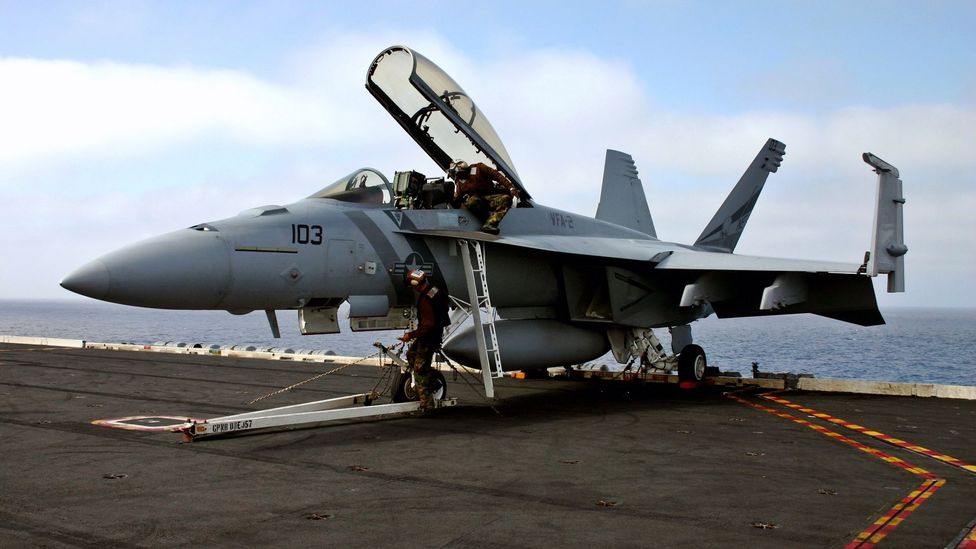 Many aircraft used on carriers have wings that fold up to save space (Credit: Getty Images)

Saristu, coordinated by Woelcken, worked with a number of aerospace firms from across Europe in a 51m euro project – and it finished its first tranche of wind tunnel test work in August. One overarching aim, says Woelcken, is to provide an answer to a perennial aviation problem: aircraft are designed to fly most efficiently while they cruise at higher altitudes – yet air traffic control demands in crowded skies often mean the aircraft cannot fly in these "sweet spots".

But if engineers can design control surfaces that adaptively change the aircraft's wing camber geometry, its aerodynamics can be altered to fly efficiently at most altitudes. "It's a very old dream," says Woelcken.

What that would need is a raft of adaptive, shape-shifting control surfaces on a wing – a leading edge, a trailing edge and perhaps a wingtip that morphs too. Saristu examined all these – and worked out how to make them lightning and ice-proof.

But their research and that of Flexsys is initially focused on flaps – the long, hinged elements that are pushed out behind the wing to increase lift at low speed on take-off and landing.

"Conventional aircraft flaps are cumbersome, noisy and unable to respond to nuanced changes in flying conditions on long-distance flights," says Rod Hill, a director at Flexsys. "The result is progressive increases in drag, greater fuel consumption, and a lack of ability to maintain a sweet spot as the flight profile changes."

Woelcken says it is crucial that morphing tests take place on life-size models: aerodynamic and frictional forces change so much when you scale-up that a smaller model would not produce the same results as an actual aircraft.

So the Saristu team designed a morphing flap for an imaginary future 90-seat airliner of the future in which just the final 50cm of the flap is adaptive – and performed extensive wind tunnel tests on a 4.9m-long section of it in a massive Moscow wind tunnel. The morphing part had 10 electric motor-driven actuators that were used to change the profile of the flap's adapted section in different flight conditions. 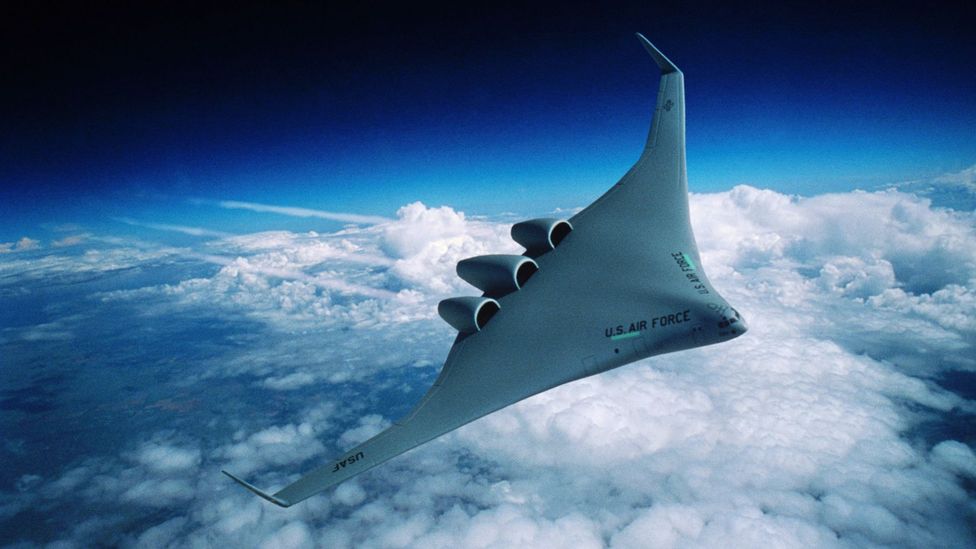 Other planemakers are also moving away form the traditional body/wing shape, like this Boeing concept (Credit: Boeing/Getty Images)

Their results were surprisingly good: projecting them up from that small sliver of morphing material to a whole aircraft, Woelcken says fuel burn on typical flights could be reduced by 6.5%. And that is without morphing leading edges and wingtips which will add more savings.

There are other advantages: if you have ever heard a low-flying aircraft coming in to its landing approach and squawking like an out-of-tune musical instrument, that's the flaps vibrating. A key advantage of creating morphing, continuous structures is that they can fill the air gaps between control surfaces and the wing with the same stretchy, tough elastic polymer that covers the morphing surfaces.

But that is no easy task: what kind of elastic stays stretchy at all temperatures?

"In the cruise phase of flight the temperature is -55C (-67F), yet standing on the tarmac in Abu Dhabi ground temperatures can be as high as 80C (176F). So finding the right material was the big task," says Woelcken. "We went for a derivative of a silicone elastomer that was originally developed for space applications."

In the US, Flexsys is also focused on the critical nature of the material covering its shapeshifting system. "Our aerospace-grade elastomeric material is part of a system that can create over 4.9 metric tons of lift and yet maintain its flexibility. It can withstand temperature conditions of  -54C (-65)° to 82C (179F), harsh chemical exposure and is tested to last five times the life cycles of commercial aircraft," says Hill.

Automatically controlling these novel elasticated surfaces should not be too much of a problem. Both the Boeing 787 and Airbus A350 fly-by-wire aircraft already morph the aircraft's aerodynamic profile with constant adjustments in flight. "Flaps and spoilers move independently and automatically to optimise fuel consumption. The pilots are oblivious to these changes on the flight deck," says Airbus A380 pilot Richard de Crespigny. He’s the author of QF32, the amazing story of how he and his crew safely landed a crippled A380 after an exploding engine cut 600 of its control cables shortly after take-off. 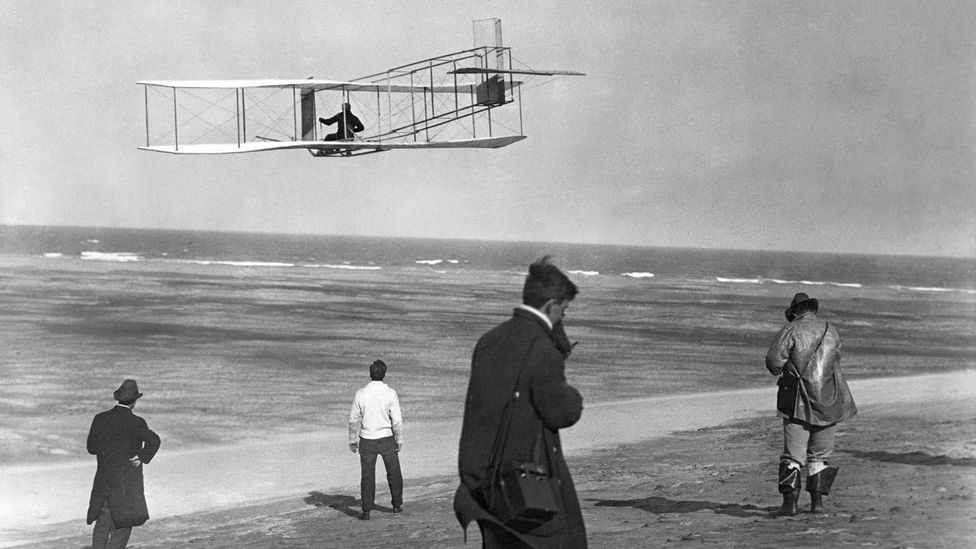 "I see enormous potential for morphing wings in flight," says de Crespigny. "The next generation of big jets that we will fly in 2050 should be about 12.5% more efficient than the best aircraft we produce today."

Europe's aviation regulator EASA has already asked Woelcken and his colleagues for a strong failure and hazard analysis of their morphing structures. If control is lost to one side, the other side must not deploy and cause an imbalance. "This could be a particular problem particularly if there's an engine failure. We need to couple both sides so if one deploys, the other does too," Woelcken says.

Hill sees it as fitting that the ideas of powered, manned flight's pioneers will be coming back into vogue at some point. "The Wright brothers discovery of wing warping was an early inspiration," says Hill.

"Their exploration of wood and fabric construction informed our development of ways to leverage the natural flexibility of current materials."

That the pair of bicycle mechanics from Dayton, Ohio are still influencing aircraft design more than a century after they first took to the air is testament to their genius. And if low-carbon morphing aircraft do take to the skies, as many expect, it will only reinforce further the Wrights' astonishing contribution to aviation.

HyperDrive
1How pilots train for disaster
In Depth
2How a Cold War bomber flew again
HyperDrive
3How to build a hypersonic airliner
Journey: Upgraded
4Things you didn’t know about flying
Around the BBC