Loading
Space Station | Moon
What if cosmonauts were the first to walk on the Moon?
Share using EmailShare on TwitterShare on FacebookShare on Linkedin 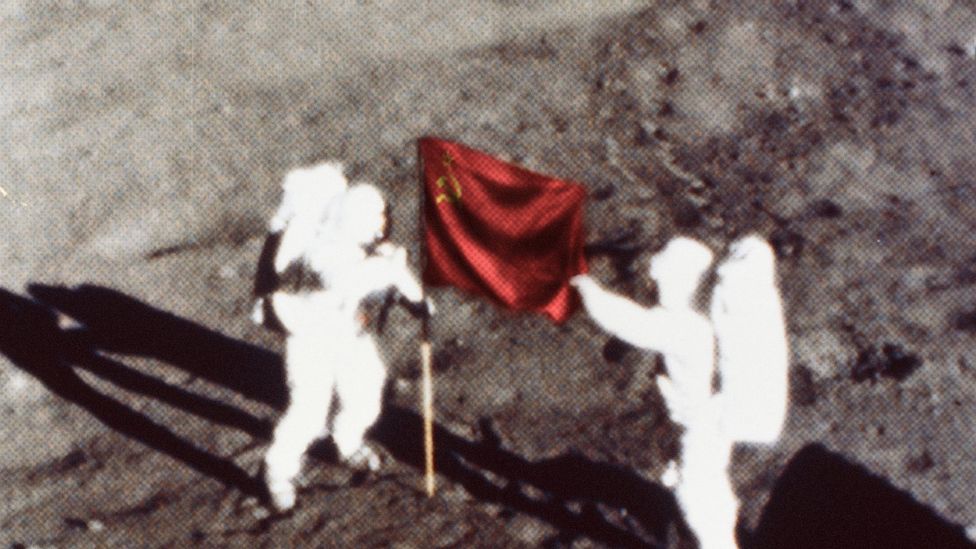 By Richard Hollingham 12th February 2016
Think the US won the titanic Cold War struggle to visit the Moon? Think again. Unmanned Soviet landers were there long before Neil Armstrong took his giant step...
A

A few minutes before 10pm Houston time on 20 July 1969, TV stations across the world interrupt their programming to bring historic news.

The words ‘live from the Moon’ flash across the screen and the picture flickers to reveal a metal ladder against a dusty monochrome landscape. A boot comes into view as an astronaut tentatively finds his footing. Then he jumps out of the frame.

The camera slowly swivels to pan across a magnificently desolate view of rubble, ridges and craters.

The astronaut’s voice is indistinct as he bounces a few metres away from the lander and we see him remove a flag from a pocket in the leg of his spacesuit. It is attached to a folded frame, which he clips together and plants in the lunar soil.

Stepping back, the first man on the Moon salutes. The hammer and sickle appears to ruffle in the vacuum. 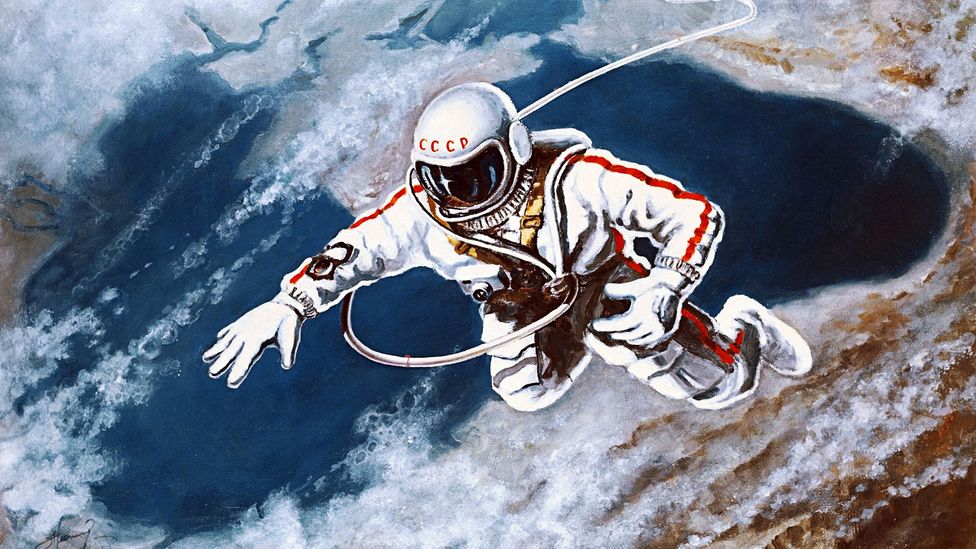 The space-walking Alexey Leonov could have become the first man to walk on the Moon (Credit: Science Photo Library)

This alternate reality of a Soviet lunar expedition is not as far fetched as you might imagine. February 2016 marks the 50th anniversary of a landing that, at the time, suggested a communist nation really could be the first to claim the Moon for all mankind.

In February 1966, a Russian space probe, Luna 9, made the first controlled ‘soft’ landing on the Moon. The mission was an engineering marvel that helped answer fundamental questions about the lunar surface and paved the way for the first crewed missions.

Before you put a human on the Moon you had to land a robotic craft and we tend to forget all the successes from the Soviet side – Doug Millard, Science Museum

“In the mid ‘60s the Americans and Soviets were both trying to get to the Moon,” says Doug Millard, space curator at London’s Science Museum, which is currently hosting an exhibition bringing together an unprecedented collection of Russian space artefacts.

“Before you put a human on the Moon you had to land a robotic craft and we tend to forget all the successes from the Soviet side,” he says.

Standing some three metres tall, Luna 9 consisted of a square base with four legs – much like the Apollo Moon lander. On top of this was a vertical cylinder topped by an ovoid dome, resembling the closed petals of a flower.

“That part was the lander itself,” explains Millard as we view an engineering model on display in the exhibition. “When it was a metre or two above the surface, this was flung off, and it unfurled four petals and righted itself like a child’s toy – really very clever indeed.”

Rather than simply announce the 3 February 1966 landing in the Ocean of Storms, the mission planners decided on a more subtle approach to global publicity.

“The pictures that were sent back to Earth were on a frequency that could be readily picked up, which I imagine was quite deliberate, says Millard. “The Jodrell Bank radio telescope in England received them and they were transmitted around the world.” 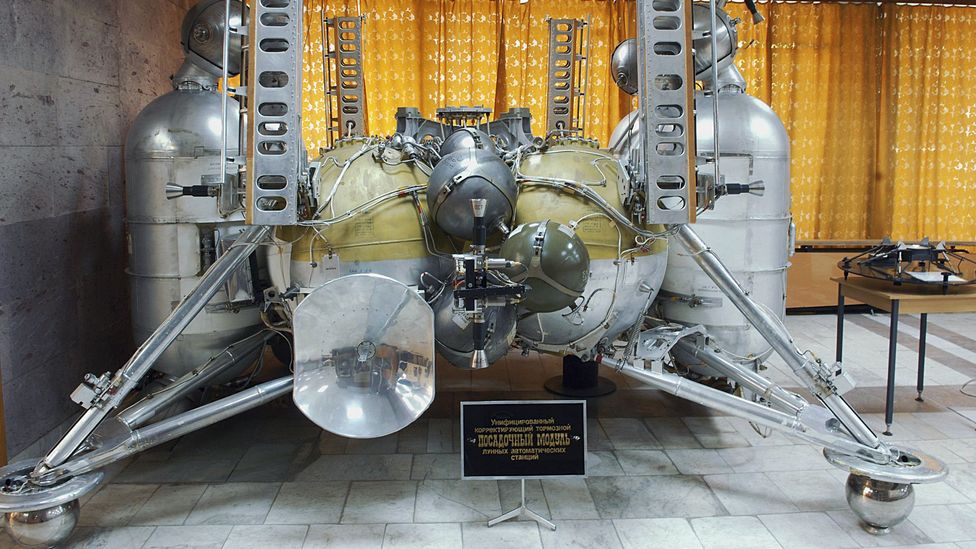 The Soviet landers like Luna 1 proved that the surface of the Moon could support a human's weight (Credit: Science Photo Library)

To newspaper readers of the time it seemed that Russia was well on its way to beating the Americans in the space race. Director of Jodrell Bank, eminent radio astronomer, Sir Bernard Lovell, described the landing to the BBC as “an historic moment” and added that it was, “the final achievement necessary for a manned landing on the Moon.”

As well as sending back nine images, the mission solved a question that was seriously bothering mission planners on both sides of the Iron Curtain. There were fears that the lunar surface was covered in some sort of deep dusty ‘quicksand’ and any lander would sink. Luna 9 proved the ground was solid, a fact that helped the Russians and Americans move ahead with their manned programmes.

The lander was not only fitted with a back up engine, an unmanned lander would have been sent to the Moon in advance

The flight profile to land a Soviet cosmonaut on the lunar surface was similar to the American’s plan for Apollo. A giant rocket would blast a module and lander into orbit around the Moon. Whereas the three-man Apollo spacecraft, had a tunnel linking the command module and lander, in the Soviet design one of the two-man crew would spacewalk across to the lander and descend to the lunar surface alone.

The obvious candidate for the world’s first spacewalker was Alexei Leonov. The bulbous five-metre-tall and heavily engineered LK-3 lunar lander he trained in is also on display in the Science Museum.

“The cosmonaut would be standing at the controls, strapped down so he wouldn’t float away, peering through the small windscreen angled down towards the lunar surface as it made the descent,” says Millard. “You can picture Leonov controlling his descent and he had even less time than Neil Armstrong to find somewhere to land – so it might have been even more dangerous than Apollo.”

The Soviet plan did, however, have several safety features built-in that were lacking in the US Apollo programme. The lander was not only fitted with a back up engine, an unmanned lander would have been sent to the Moon in advance.

“That would be used in the eventually of a failure of Leonov’s lander,” says Millard. “A robotic rover would also have been launched prior to Leonov’s landing to act as a beacon. It could also be used in an emergency for the cosmonaut to drive to the back-up lander and thereby return safely to Earth.” 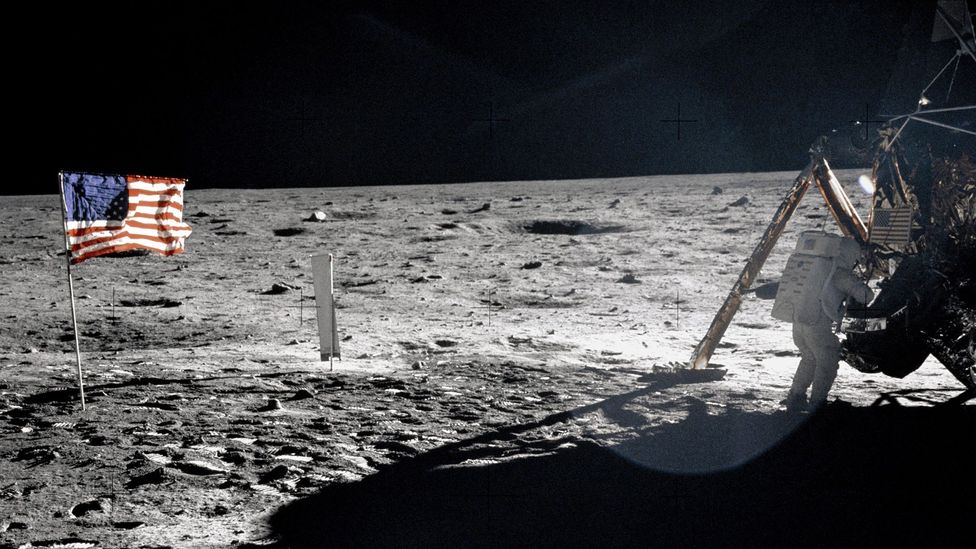 It was an ambitious and well-thought-through plan. The lunar lander was successfully tested – unmanned – in Earth orbit. And the first robotic Moon rover Lunokhod 1 – around the size of a small car – made it to the Moon’s surface in 1970.

Unfortunately for the Soviet space programme, the giant N1 rocket they needed to get Leonov to the Moon never completed a successful launch. At 105m (346ft), similar in height to the American Saturn 5, this was a beast of a rocket. Its first stage alone was fitted with 30 engines.

Completed after the untimely death of chief Soviet rocket designer Sergei Korolev, the N1 project was rushed and the engines never fully tested on the ground before the first launch in February 1969.

If the N1 rocket programme had started a few years earlier, Alexei Leonov could realistically have been the first man on the Moon

All four launch attempts ended in failure – the first N1 rocket lasted a minute, the second collapsed back onto the launch pad in a fireball, the third disintegrated and fourth exploded.

By this time, 1972, the race to put a man on the Moon was well and truly lost, although the Soviet lunar programme was not officially cancelled until 1974.

What should not be forgotten, however, is that when it came to robotic probes, the Russians got to the Moon first. And in January 1973, a few weeks after Gene Cernan left the last footprint on the Moon, Russia’s second Lunokhod rover began a four-month mission trundling across the lunar surface and returning high-resolution pictures back to Earth.

If the N1 rocket programme had started a few years earlier, Alexei Leonov could realistically have been the first man on the Moon. Although, warns Millard, some people still would not have believed it.

“If Leonov had been the first man on the Moon, the flag would have been different but it would still have wobbled about – because once you touch a flag on the Moon it doesn’t stop wobbling,” he says. “It would have been the same conspiracy theories all over again.”

future
1Curios from the cosmonauts
Space Station
2A village made of Moon dust
Space Station
3The gory reality of space surgery
Homo Spaciens: Our new life off Earth
4How to prepare for extreme isolation
Around the BBC