Loading
In Depth | Technology
How do you find a shipwreck’s lost gold?
Share using EmailShare on TwitterShare on FacebookShare on Linkedin 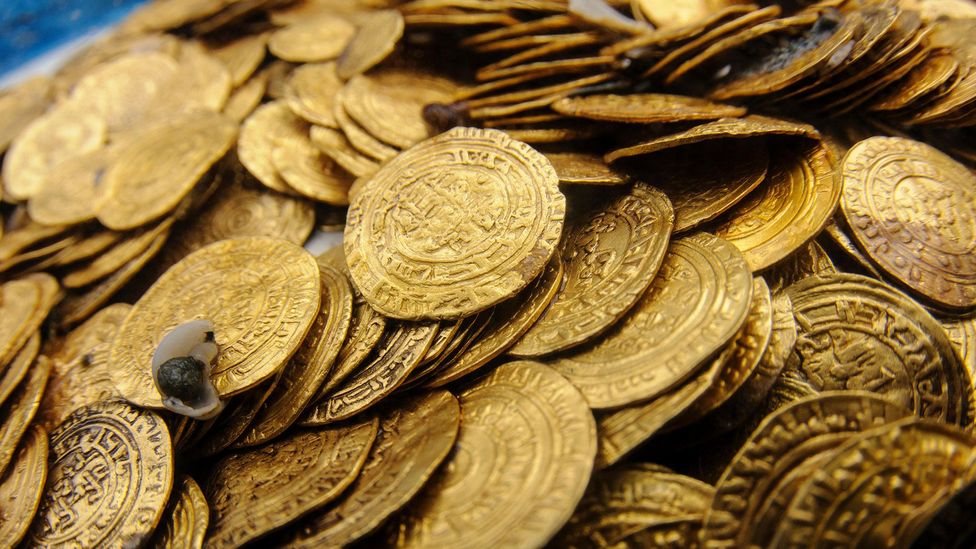 By Chris Baraniuk 15th February 2016
In the 21st Century gold rush, every treasure hunter needs some seriously hi-tech kit to find the bullion - from satellites spying on the oceans from space to intelligent underwater drones.

Bluefin makes autonomous underwater vehicles (AUVs) – underwater drones that “fly” through the sea by themselves, scanning the seabed across a grid plotted by their operators. Unlike other, “remotely operated” devices, they’re not tethered to a boat or controlled by a human, so they have to intelligently navigate by themselves and then return to the ship in one piece.

This kind of technology has long been of use to the military, for things like detecting underwater mines, for example. But today there is a new gold rush in town – a rush for shipwrecked treasure. (Read BBC Future’s recent, in-depth profile of one of the most ambitious “million-dollar haul’s for gold” from the sunken SS Connaught.)

Technology has a starring role to play in the search for these sunken spoils. But what special capabilities, exactly, do modern gadgets give a 21st Century treasure hunter? 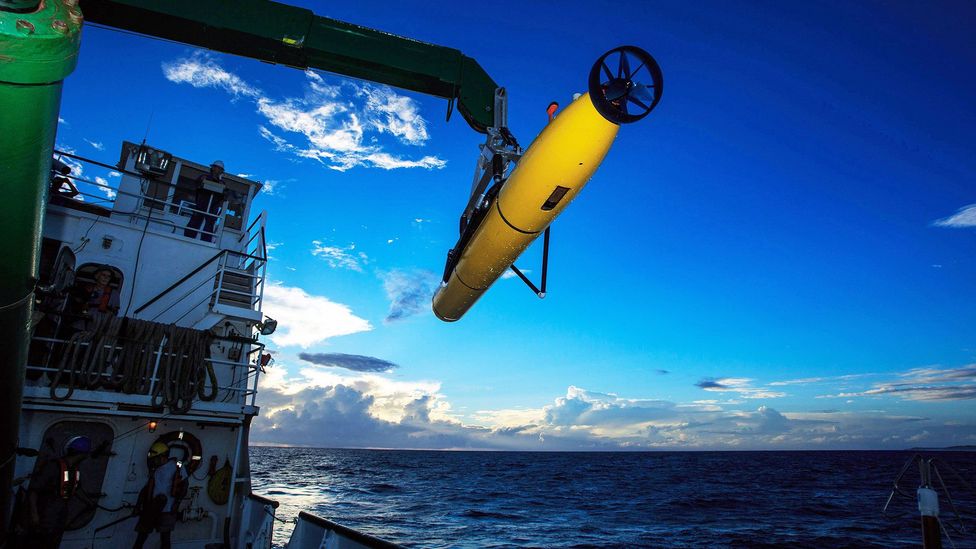 An underwater autonomous vehicle gets ready to probe the ocean depths in the hunt for treasure (Credit: Bluefin Robotics)

At Bluefin Robotics’ workshop, just south of Boston, an American flag hangs down over rows of benches where AUVs are being built and serviced. Stacks of parts and components are periodically nosed through by engineers and electricians. The AUVs have pressure-sensitive, water-tight housings to protect their electronics. They also contain hard foam blocks which contract under pressure allowing water in to special chambers, which helps to control buoyancy at depth. Really, they’re like mini submarines with minds of their own.

Some of the vehicles are more than a metre long – indeed, one is a huge square platform at least four metres on its longest side – while others are comparatively tiny, less than a metre in length.

AUVs have been used in the search for Malaysia Airlines flight MH370, which disappeared on 8 March 2014 with 239 people on board

Bluefin’s AUVs have been used in the search for Malaysia Airlines flight MH370, which disappeared on 8 March 2014 with 239 people on board. They also helped Microsoft executive Paul Allen find a lost WWII battleship. O’Halloran, speaking on the phone, says that publicity like this has added to growing awareness of advanced search and salvage technology.

“People are more cognisant now that technologies exist which allow you to recover things that were once thought lost forever,” he says.

Bluefin’s AUVs are all the more impressive when you realise that they have to operate with an astonishing degree of independence and reliability. Not only are they not physically linked back to the boat that launches them; when  “flying” in deep water they may lose GPS signal too, and they may suffer an extremely slow data connection back to the operators. In other words, once the AUV is launched, you want to be pretty sure it knows what it’s doing. One strategy to overcome these problems is to judge the water currents and changes in buoyancy to detect when they go off track to make sure they never wander from the region they are meant to be probing. Besides sonar, the drones can also take pictures of the sea floor and objects on it, explains O’Halloran. “The vehicles do carry cameras on them and they take pictures in the way a spy satellite would,” he says.

An underwater robot is great for getting closer to a wreck you know is in the area. But how do you go about surveying large plots of the underwater environment in the first place? Many explorers are looking for wrecks down there that no-one had previously recognised before.

One surprising approach investigated lately involves sensing from a very great distance indeed – space. Dr Rory Quinn at the University of Ulster and colleagues described how satellite imagery can detect the presence of shipwrecks underwater.

The team showed that visible light and near-infrared scanning of coastal waters allowed for the detection of plumes – clouds of sediment for example – surrounding shipwrecks. “Although satellite data cannot match acoustic and laser data in terms of resolution, it does offer the user a much broader view of the coastal landscape,” the paper notes.

Quinn points out, however, that one limitation of this type of scanning is that it is limited to coastal depths of 500 ft (150 m) or less. 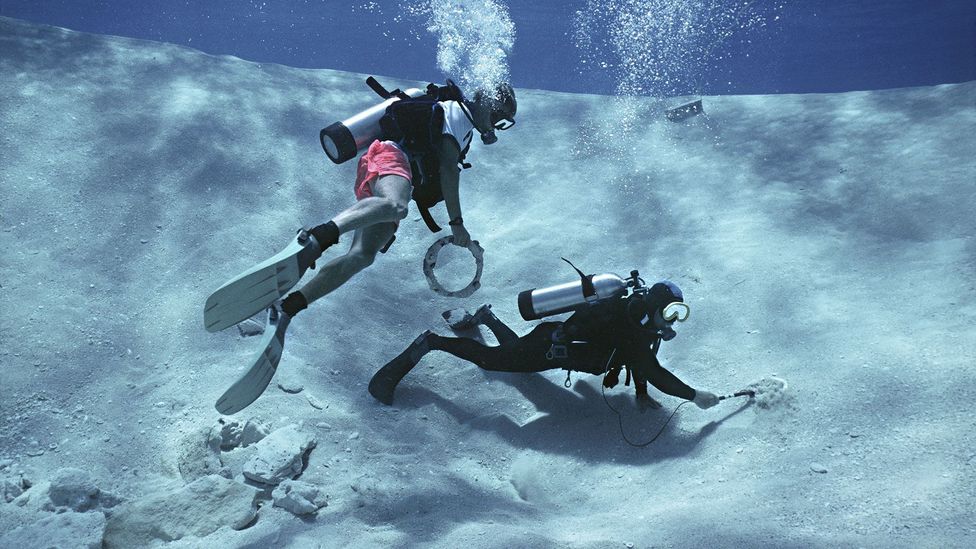 Automated robots do much of the leg-work of a treasure hunt, before divers get their hands on the gold (Credit: Getty Images)

If you do want high resolution imagery, and you also want to survey a large area at greater depths, then you’re likely going to have to turn to an advanced form of sonar called synthetic aperture sonar (SAS). Unlike traditional systems, which fire sound signals towards a target as the ship or AUV carrying the sonar passes above it, SAS fires multiples pings during the flyover. This means that a higher resolution image of what’s down there can be achieved – down to a few centimetres of detail, even.

It’s the difference between being able to see a tractor tyre and a book – or a gold bar. One of the companies providing this kind of technology to salvage crews is Canadian firm Kraken Sonar. Among the high-tech features of Kraken’s systems is an ability to constantly adjust the data in order to account for the fact that the sonar rig is moving – even bobbing up and down on the waves. The resulting image of the seabed has to look as clear as if the device that captured it was rock-steady the whole time. Kraken’s sonar can do this – and it can also present 3D imagery to operators on survey vessels in an instant.

“We’re able to create 3D models at the same time that we’re getting the images,” explains Karl Kenny, president and CEO. “So we’re actually building 3D models of the seabed on the fly – which is really, really cool.”

Kenny says that as the price point of technology like this has come down in recent years, he’s been getting more and more enquiries from treasure hunters and salvagers. In fact, Kraken is currently in discussions with an American search and recovery firm which might use their high-resolution sonar during a survey of a 19th Century ship this summer. The wreck in question might have been loaded with a purser’s safe full of silver and gold. If things go to plan, Kenny’s sonar just might spot that safe in the wreckage.

Even more futuristic technologies are on the horizon. A novel project in this category, led by former Nasa scientist Dr Arthur Lonne Lane, is known as “DUV-Dart” – deep UV detection and analysis in real-time. The problem with metal detectors, which are often used underwater to examine shipwrecks, is that they basically tell you if there’s metal there or not – they aren’t good at differentiating between iron (probably not valuable) and gold (very valuable). This is one problem that DUV-Dart is designed to solve.

When a UV light is shone at these ions underwater, they begin to glow

It works by optically detecting the presence of ions – atoms of an element that have a greater or lesser number of electrons than protons. When a UV light is shone at these ions underwater, they begin glowing themselves at a different wavelength and – crucially – this signature fluorescence is specific to the type of ions present. That gives away what long-lost metal they have come from, now dissolving or corroding in the water. 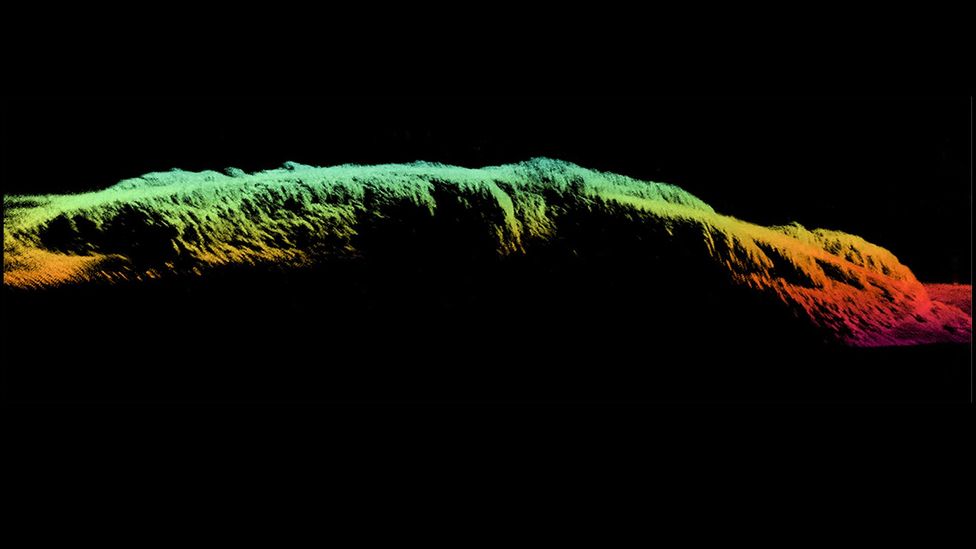 A sonar profile of the SS City of Rio De Janeiro, off the coast of San Francisco. The bow can be seen at the left, the hull and stern on the right (Credit: Coda Octopus/NOAA)

“It’s a pattern that forms and it appears to be reproducible and unique,” says Lane, speaking from his laboratory. It’s a fascinating concept, a sort of optical “sniffer” for specific metals. And Lane even claims that it can detect substances up to a metre away. “The difficult one is the one everyone asks first. Can you sniff gold?” he says.

Lane explains that gold is harder because it is very non-reactive and doesn’t corrode so easily. This means ions are not distributed in the water. Luckily, though, gold is often found alongside silver. “The silver fortunately does corrode,” says Lane, “it does produce a set of detectable ions at quite a concentration.” A gadget like DUV-Dart might soon be helping salvagers detect previously missed valuables on big, messy wrecks.

Given these advanced gadgets, it seems like being a treasure hunter in 2016 – and beyond – is a far cry from the intrepid explorations of days gone by. Today, it’s partly about a race to have the most high tech bit of kit on your boat, or attached to your underwater drone.

The spirit of their expeditions remains the same though; for today’s salvagers, conquering the depth and darkness of the oceans is still the greatest challenge left to solve, just as before. For every shipwreck that has been successfully excavated, there are surely many more, full of treasure, just waiting to be prised open. The trick is finding them – and accurately mapping them when you do.