In the modern world, there’s a certain snobbery around telling comic strips. Even when we do try to give them a certain credibility, it can sometimes feel like we are damning them with faint praise, as fantasy author Neil Gaiman remembered when a pompous fan told him his Sandman series should be considered “graphic novels” rather than mere “comic books”. “I felt like someone who had been informed that she wasn’t actually a hooker, that in fact she was a lady of the evening.”

If Gaiman had been a Mayan artist living between 600 and 900 AD, his experience may have been very different; their drinking vessels were painted with pictures and text that told a story as you turned the cup. Far from being throwaway escapism, they were considered prized objects and often exchanged to ease political negotiations and to build alliances between states. “It was the highest quality art you could have,” says Soeren Wichmann at Leiden University in the Netherlands. “It was highly valued, whereas in modern societies comics are frowned upon.”

His speech bubble says something like 'smell your sweat, wizard penis'

Wichmann first wrote about those sequences in a paper called America’s First Comics, which he has now updated for a chapter in a new book called The Visual Narrative Reader. He points out that unlike modern graphic novels, they mainly depicted just a few scenes from well-known stories – the idea being that its viewers already knew the main sequence.

Of course, visual storytelling of some kind can be seen in the oldest cave paintings, but he thinks it is particularly striking how similar these Mayan scenes are to the comics we enjoy today – including the way they represent speech, motion, bad smells, funny animals and naughty jokes. “You have all these mechanisms come together – it’s getting close to something that is very similar to comics.”

View the gallery below to see some examples, including a cheeky rabbit that could be considered the “Mayan Bugs Bunny" as he tells an old man to "smell your sweat, wizard penis". 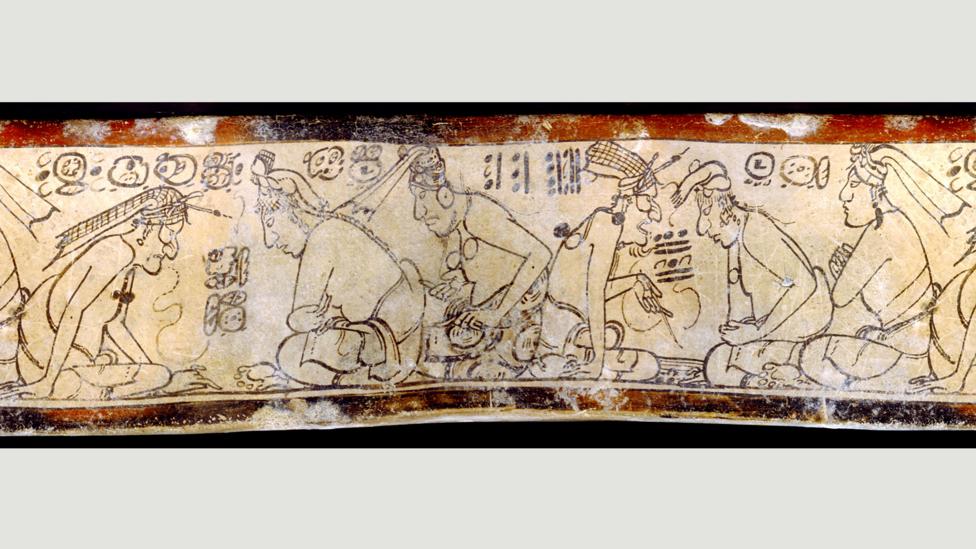 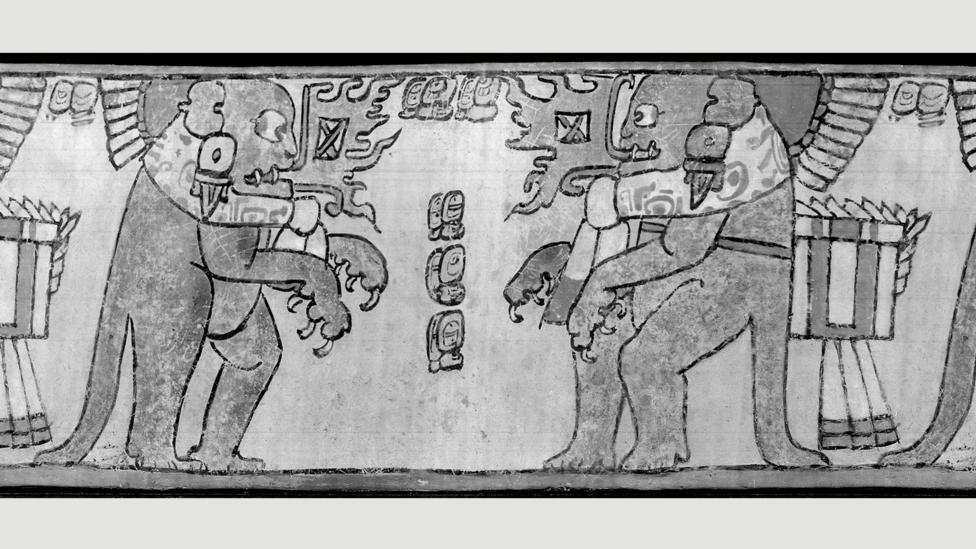 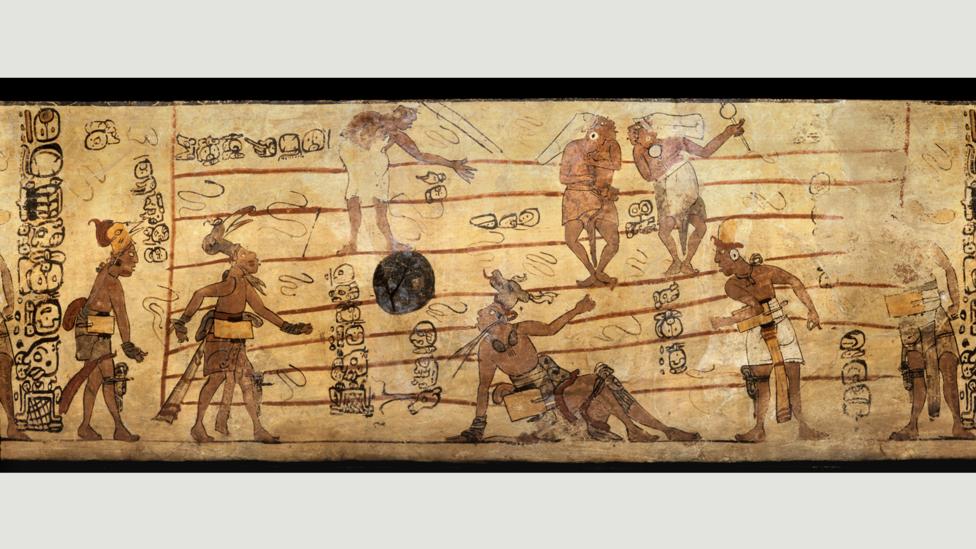 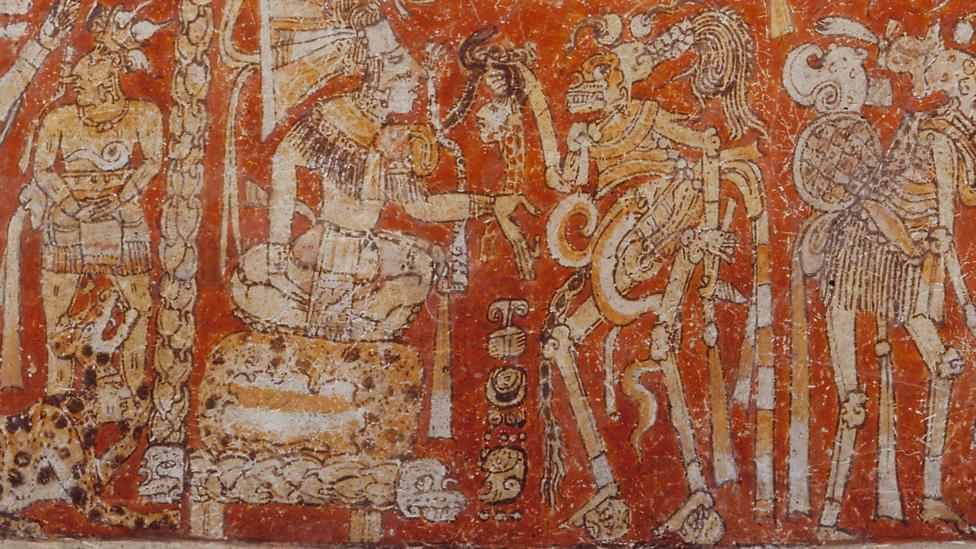 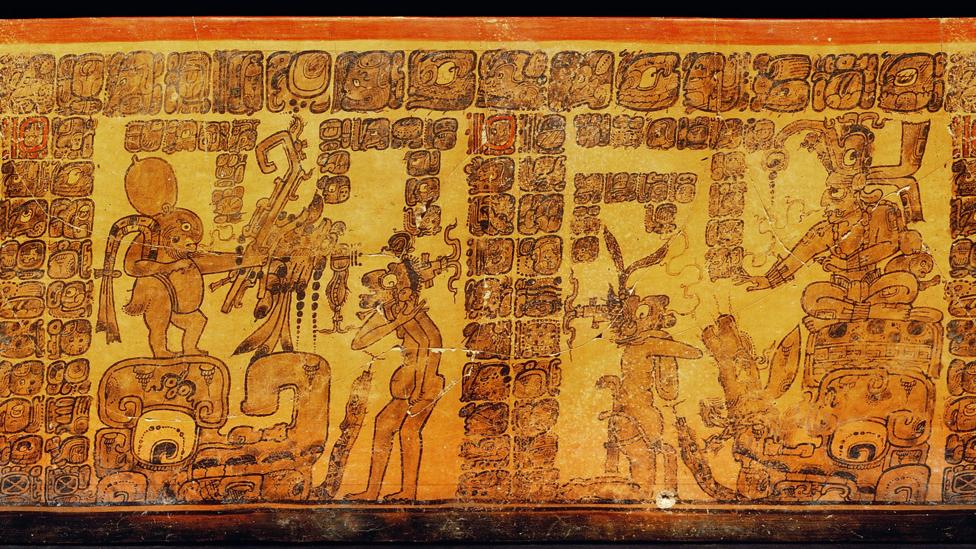 An elderly teacher corrects his pupils, with a thin line connecting the mouth to the written speech. This motif may have first appeared in 650 BC. (Credit: Justin Kerr)

Should we be surprised by these strange parallels? Neil Cohn at the University of California, San Diego (who edited The Visual Narrative Reader) points out that communicating with visual narratives may be as natural as speech or hand gestures; it should really be considered another form of language. Like spoken or signed languages, he therefore thinks each visual language may evolve their own vocabularies and grammars.

You can see this all across the world; he has found that American comics  and  Japanese manga books follow distinct rules when constructing their stories, for instance, while the Arrernte aborigines of Australia have a series of complex signs that they will draw in the sand during spoken storytelling that again follow a different “grammar”. So even though the drawings on Mayan vessels may look like modern comics, they will have their own conventions too, he thinks; they are not the same thing.

Even so, some of the similarities have caught his attention; he is intrigued that visual metaphors like fire are still used to represent an emotion, even hundreds of years ago in a distant culture. “That anger is associated with fire in the Mayan narratives as well as contemporary speech and drawings is informative for how we conceive of these types of abstract ideas.”

If nothing else, these fantastic pieces of artwork should remind us that comical, visual stories were once the gifts of kings – the Mona Lisas of their day. 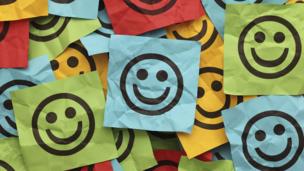 Will emoji take over English? 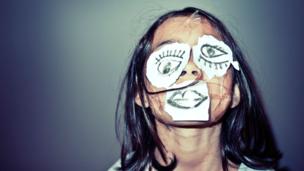 Why do we doodle? 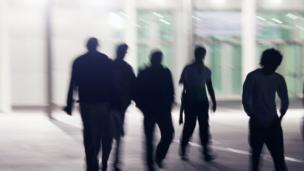 The secret languages of the underworld 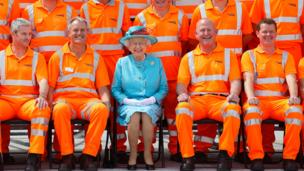 How is the Queen's accent changing?
Around The BBC