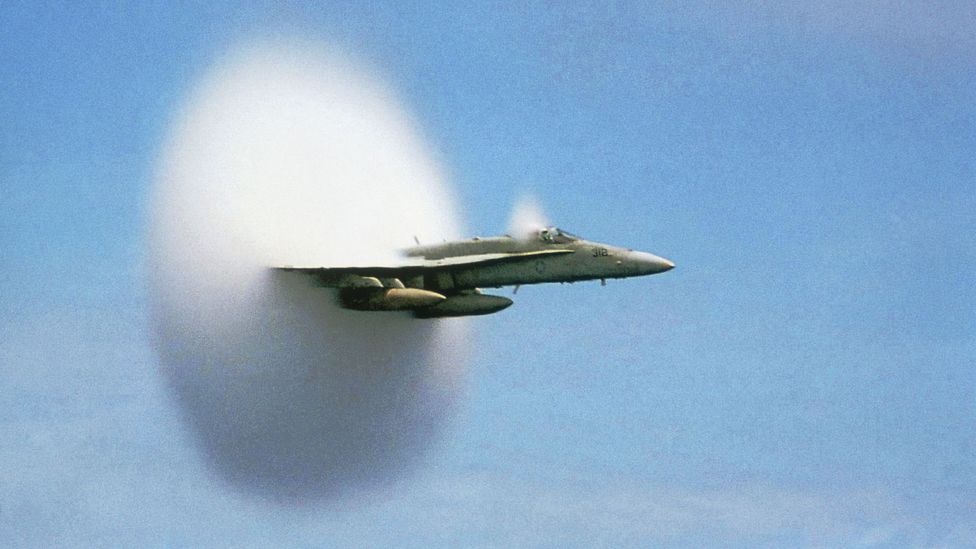 By Stephen Dowling 17th February 2016
Awe-inspiring photographs of fast jets surrounded by a split-second shockwave aren’t evidence of a plane breaking the sound barrier. BBC Future looks at what causes them.
I

It’s an eye-catching sight that has been captured by photographers and camera crews time and again; a military jet sweeps in low and fast, travelling at hundreds of miles an hour. As it picks up speed, it begins to be surrounded by a giant cone of vapour, a cloud that seems to erupt around the aircraft.

That, we’re often told in excitable captions, is a sonic boom.

Except, it isn’t – or at least, not quite. What you’re seeing is a physical effect that takes place as an aircraft approaches the speed of sound, but it’s not the sonic boom itself.

As aircraft design has become more sophisticated, planes have become more streamlined, and faster – and begun to do things to the air around them that they just weren’t able to do when they were slower and more cumbersome. And the mystery shockwaves that surround, low, fast-flying planes as they approach and then pass the sound barrier are proof that the air starts to do some very strange things at such speeds. 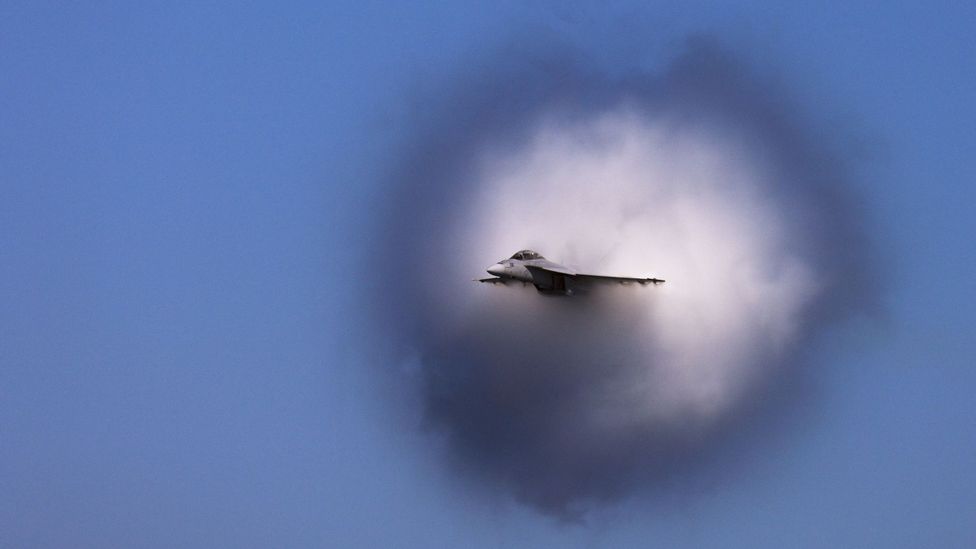 The effect is most noticeable when an aircraft is flying through warm, moist air (Credit: Getty Images)

So what are these mystery vapour cones?

Rod Irvine, the chairman of the Royal Aeronautical Society’s aerodynamics group, says the conditions that create the vapour cone all lead toward the breaking of the sound barrier – but the cones are usually photographed at speeds just below the speed of sound.

Flying so close to the ground, the air is denser and creates more friction and drag – and, anyway, pilots are banned from breaking the sound barrier over land. “You can do it over the sea,” he says, “but you can’t do it over the land. It’s one of the things that the Concorde project suffered from because as Concorde was developed the rules changed which meant it could only break the sound barrier over water.”

The shock waves are the physical effects of the aircraft travelling so fast through air, especially if it’s moist and warm, and affecting the air around it

Moreover, capturing the shockwaves created when an aircraft passes the speed of sound are incredibly difficult – they’re much harder to pick up with the naked eye. You need special kit in order to see it. When photographing aerodynamic models being subjected to supersonic speeds in wind tunnels, scientists usually use mirrors to pick up the difference in light refraction from the resulting shockwaves. The resultant Schlieren photograph is then used to visualise the system of shockwaves around the wind tunnel model. In wind tunnel tests the models don’t tend to create the same kind of vapour cones because the air is treated to take the moisture out of the air.

The vapour cones are created by a shockwave that is generated by the aircraft as it picks up speed. The shock waves are the physical effects of the aircraft travelling so fast through air. As the aircraft picks up speed, and approaches the speed of sound – around 767mph (1,234km/h) at sea level – shockwaves form around the aircraft. Across these shockwaves there is ‘discontinuity’ in the local air pressure and temperature. This causes the air to lose its capacity to hold water and condensation starts to form, creating the vapour cone. 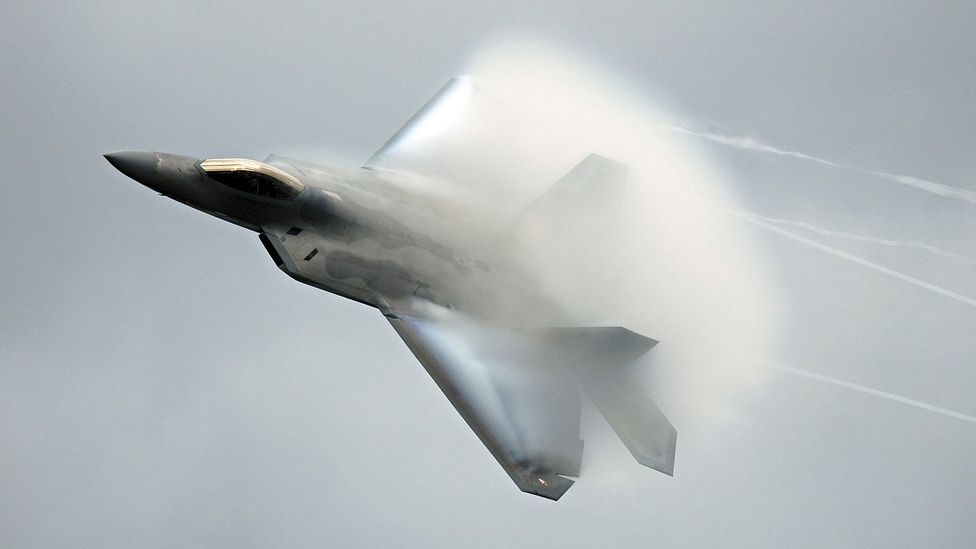 “If you see a vapour cone, you’ve got a shockwave, because you’ve got a change in pressure and temperature,” says Irvine.

Many of the best pictures of this phenomenon feature aircraft flown by the US Navy; no accident, given that the warm, moist air close to the surface of the sea can help amplify the effect.

It’s a trick commonly performed by F-A/18 Hornet fighter-bombers, the mainstay of the US Navy’s carrier fleets. The Hornet is also used by the Blue Angels aerobatic team, and these pilots are adept at performing manoeuvres that creates these vapour cones – also known as ‘shock collars’ or ‘shock eggs’. Moreover, they’re often done next to an aircraft carrier or out to sea, with trained US Navy photographers close to hand – taking a split-second picture of a jet travelling at 600mph (960km/h) is not something you’re likely to capture in crystal-clear detail on your smartphone.

Just to make things more complicated, the vapour cones are often the most dramatic when they take place in what’s called ‘transonic’ flight – that’s when some of the air flowing around the aircraft is flowing at above the speed of sound, and some of it below. 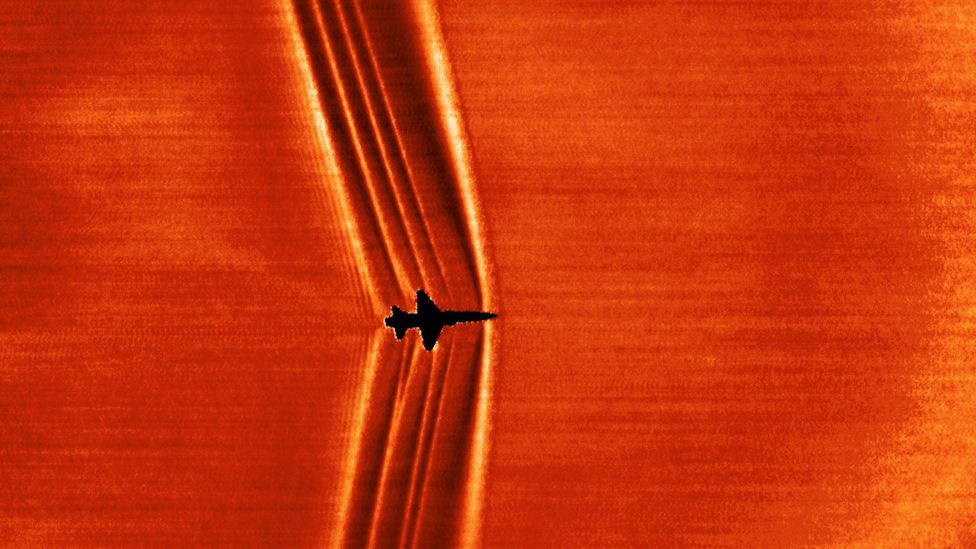 When an aircraft breaks the speed of sound, the shockwaves can be difficult to detect with the naked eye (Credit: Science Photo Library)

“The aircraft isn’t necessarily travelling faster than the speed of sound, but the air travelling over the wing is accelerated and locally breaks the sound barrier,” says Irvine.

Ultimately, he says, you need to have the right climactic conditions – the kind of warm moist air that aircraft operating off carriers can find easier than most. Then, get a nearby cameraman who really knows what they’re doing and voila – you’ve captured, on camera, the dramatic vapour cloud that so many of us think is the split-second spectacle of a sonic boom.