Loading
Space
The strangest objects we’ve left on the Moon
Share using EmailShare on TwitterShare on FacebookShare on LinkedinShare on Whatsapp
By William Park 19th February 2016
The Moon is covered in everything from human waste to gold. Watch the video above to see the oddest items.
H

Humankind has spent a total of 300 hours on the lunar surface, courtesy of the six Apollo missions which landed on the Moon. Neil Armstrong and Buzz Aldrin visited for a fleeting 21 hours and 36 minutes during the historic Apollo 11, but the later missions lasted for up to three days each.

In that time we’ve left an awful lot of stuff up there, jettisoned so that we could return with valuable rock samples. In the video above we list some of the stranger examples of our footprint on the Moon.

Some parts of the Moon are, quite literally, covered in human waste. By some counts there are 96 packets of human excrement, urine and vomit on the lunar surface left by the 12 Apollo astronauts who briefly called it home.

Some of the more valuable examples of lunar jetsam include the 12 Hasselblad cameras left behind. The astronauts returned with the films, but left all but one of the camera bodies on the Moon. It was Apollo 14’s Edgar Mitchell who returned with the only example with the excuse that he didn’t have enough time to take out the films while packing up. The camera was sold in 2014 for $910,000 (£636,450). 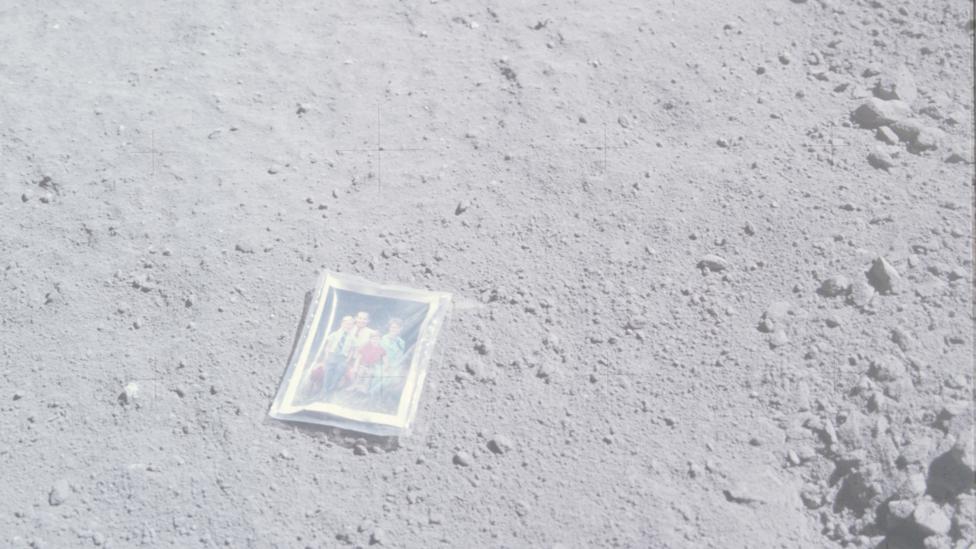 This family portrait deposited by Apollo 16’s Charles Duke still lies where it was left, but is probably now completely bleached (Credit: Nasa)

There is also a gold-plated telescope designed by Dr George Carruthers – the only telescope to make observations from the surface of another planetary body. The gold plating might have saved the telescope from the worst of the damage from solar radiation in the four decades it has remained up there, but many of the most famous objects on the Moon have probably fared much worse.

It’s likely that all six of the American flags left behind are bleached white now. And we know that only five are left standing after Apollo 11’s was knocked over as the astronauts returned to the Command/Service Module.

The portrait of the Duke family, which was left by Apollo 16’s Charles Duke, is also likely to have now faded, but the message on its reverse signed by the family probably still remains: “This is the family of Astronaut Duke from Planet Earth. Landed on the Moon, April 1972.”

Space Station
1A village made of Moon dust
Space Station
2Did the USSR really win the Moon race?
Space Station
3Britain's plan for Nazi spaceships
Homo Spaciens: Our new life off Earth
4How to prepare for extreme isolation
Around the BBC