The British are famous for how frequently they say ‘sorry’ – even when they’re not at fault. But does the data hold up this stereotype? And is apologising so often really that bad?

It is probably the most over-used word in the United Kingdom: whether they are sorry about the weather or sorry because someone else has bumped into them, chances are your average Briton has blurted out at least one apology in the past hour or two.

A recent survey of more than 1,000 Brits found that that the average person says ‘sorry’ around eight times per day – and that one in eight people apologise up to 20 times a day.

The average Brit says ‘sorry’ around eight times per day

But do the British really apologise more frequently than members of other cultures? If so, what’s the reason for this peculiar verbal tic… and how bad a habit is it?

Getting reliable data on the frequency of apologies in different countries is harder than you might think. “There’s certainly speculation that Canadians and Brits apologise more than Americans, but it’s difficult to study in a way that would provide any compelling evidence,” says Karina Schumann, a psychologist at the University of Pittsburgh who studies apologies and forgiveness. 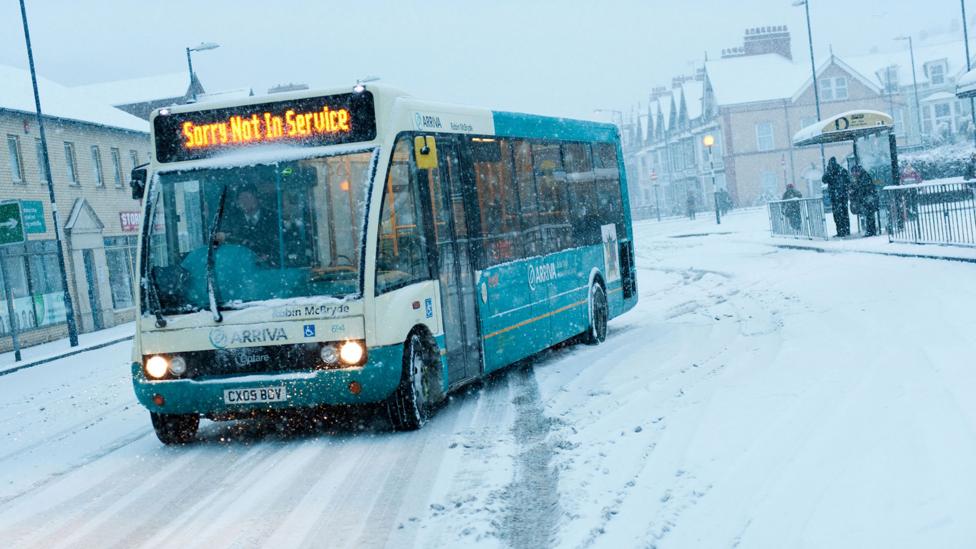 It’s difficult to study the use of the word ‘sorry’ in a way that would provide compelling evidence (Credit: Alamy)

One approach is to ask people what they’d do in a theoretical situation. For instance, a recent YouGov poll of more than 1,600 British people and 1,000 Americans revealed that there would be approximately 15 British ‘sorries’ for every 10 American ones if they sneezed, if they corrected someone’s mistake, or if someone crashed into them.

But the survey found similarities between the British and American respondents, as well: just under three-quarters of people from either country would say sorry for interrupting someone. And 84% of Brits would apologise for being late to a meeting, compared to 74% of Americans.

However, asking someone what they’d do in a theoretical situation is very different to measuring what they’d do in real life. Take the last example; in the YouGov survey, 36% of British respondents said they would apologise for someone else’s clumsiness, compared to 24% of Americans.

But in her book Watching the English, social anthropologist Kate Fox describes experiments in which she deliberately bumped into hundreds of people in towns and cities across England. She also encouraged colleagues to do the same abroad, for comparison.

Fox found that around 80% of English victims said ‘sorry’ – even though the collisions were clearly Fox’s fault. Often the apology was mumbled, and possibly people said it without even realising it, but compared to when tourists from other countries were bumped, the difference was marked. “Only the Japanese seemed to have anything even approaching the English sorry-reflex,” Fox writes.

The origins of the word ‘sorry’ can be traced to the Old English ‘sarig’ meaning “distressed, grieved or full of sorrow”, but of course, most British people use the word more casually. And herein lies another problem with studying cultural differences in languages. “We use the word ‘sorry’ in different ways,” says Edwin Battistella, a linguistics expert from Southern Oregon University and author of Sorry About That: The Language of Public Apology. Brits might say sorry more often, but this doesn’t necessarily mean they’re more remorseful.

“We can use it to express empathy – so I might say ‘sorry about the rain’,” says Battistella. “It might be that British and Canadian speakers use that kind of ‘sorry’ more often, but they wouldn’t be apologising, per se. Other researchers have talked about the use of ‘sorry’ to communicate across social classes, where you’re sort of apologising for your privilege.”

British society values that its members show respect without imposing on someone else’s personal space, and without drawing attention to oneself: characteristics that linguists refer to as “negative-politeness” or “negative-face”. America, on the other hand, is a positive-politeness society, characterised by friendliness and a desire to feel part of a group.

As a consequence, Brits may sometimes use ‘sorry’ in a way that can seem inappropriate to outsiders, including Americans. The British will say ‘sorry’ to someone they don’t know because they’d like to ask for some information, or to sit down next to them – and because not saying ‘sorry’ would constitute an even greater invasion of that stranger’s privacy.

“Our excessive, often inappropriate and sometimes downright misleading use of this word devalues it, and it makes things very confusing and difficult for foreigners unaccustomed to our ways,” says Fox. Still, she adds, “I don’t think saying sorry all the time is such a bad thing. It even makes sense in the context of a negative-politeness culture… Of all the words that a nation could choose to scatter about with such random profligacy, surely ’sorry’ is not the worst.” 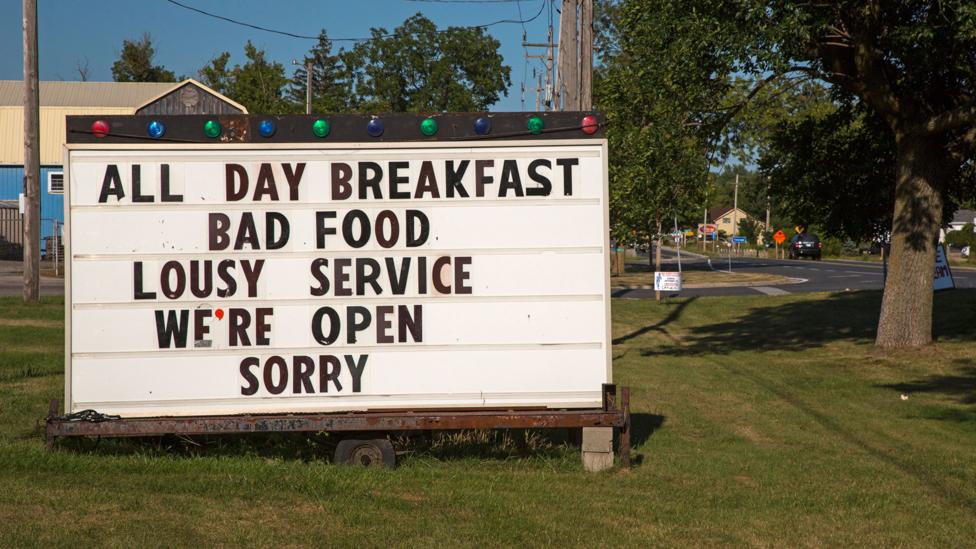 Does the excessive – even inappropriate – use of the word ‘sorry’ devalue it? (Credit: Alamy)

There may be other benefits to saying ‘sorry’, too – such as fostering trust. Interestingly, that is true even when people are apologising not for mistakes they’ve made, but rather for circumstances beyond their control.

In one study, Harvard Business School’s Alison Wood Brooks and her colleagues recruited a male actor to approach 65 strangers at a US train station on a rainy day and ask to borrow their telephone. In half the cases, the stranger preceded his request with: “Sorry about the rain”. When he did this, 47% of strangers gave him their mobile, compared to only 9% when he simply asked to borrow their phone. Further experiments confirmed it was the apology about the weather that mattered, not the politeness of the opening sentence.

“By saying ‘I’m sorry about the rain’, the superfluous apologiser acknowledges an unfortunate circumstance, takes the victim’s perspective and expresses empathy for the negative circumstance – even though it is outside of his or her control,” says Wood Brooks.

Of course, the British aren’t the only group known for being apologetic. Women are often presumed to be, too.

To test if this stereotype stood up to scrutiny, Schumann recruited a group of university students to keep a journal for 12 days. They listed every situation they encountered where they felt an apology was deserved and whether or not one had been given. She found that the women did say ‘sorry’ more often than the men, but they also reported more offenses when they thought an apology was needed – both for when they were the victim and when they were the perpetrator. When this was taken into account, men and women proved equally likely to apologise for their transgressions. “It’s not so much that men are unwilling to apologise; it’s just that they’re seeing fewer offenses that deserve an apology,” Schumann says.

So what about those circumstances when we are aware that we genuinely owe someone an apology? Is it better to swallow your pride and say you’re sorry, or – as the legendary American actor John Wayne put it – is apologising a sign of weakness?

“People worry that an apology will serve as an admission of liability, rather than as an effort to empathise with the wronged party,” says Wood Brooks. But she adds “effective apologies address the recipients’ feelings – they don’t prove a point. A good apology is unlikely to backfire, and is more likely to increase trust than not apologising at all.” 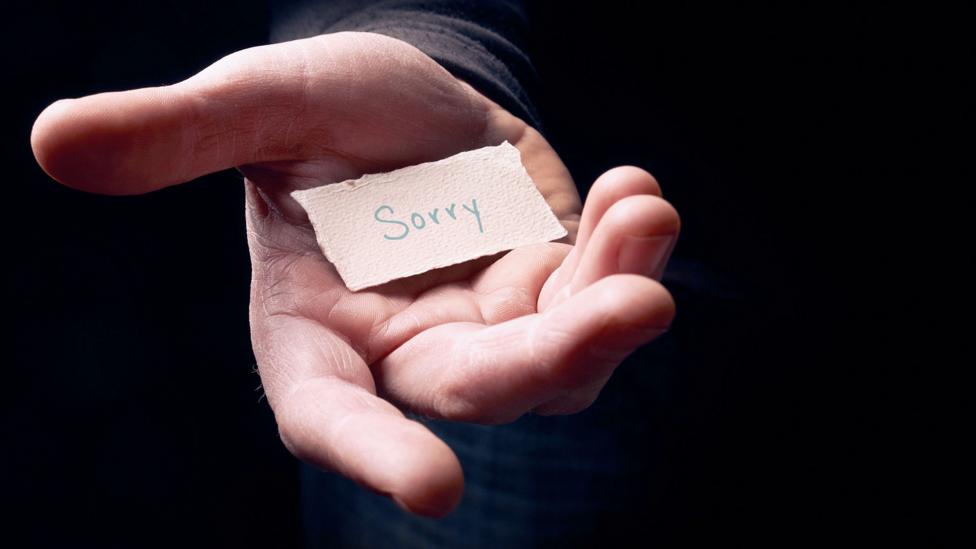 An effective apology addresses the recipients’ feelings – and is likely to increase trust more than not apologising at all (Credit: Alamy)

As for how to do it, Battistella has the following advice: “The right way to apologise is the way your mother taught you.” Say you threw a stone at a sibling. “She’d have you go and look them in the eye in the eye and say: ‘I’m sorry I threw the stone at you and I won’t do it again’. It’s important to name what you did wrong, to show yourself as being penitent in some way and to indicate what might be different in the future,” Battistella says.

Just how many times you’ll need to repeat the apology may vary according to where you live. Wood Brooks and Harvard PhD student Grant Donnelly have collected preliminary data that suggests that, for a minor transgression, the optimal number is a single “I’m sorry”.

“If the transgression is large, then making two apologies seems to be the magic number for conveying empathy, remorse and restoring trust and liking,” Wood Brooks says.

Of course, if you’re British, you may need to double that. “A single ‘sorry’ does not count as an apology: we have to repeat it and embellish it with a lot of adjectives,” says Fox.

Apologise for the rain while you’re at it, too. 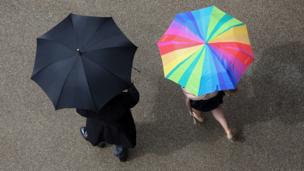 Why Brits always talk about the weather 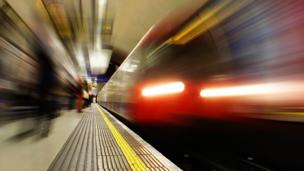 A driver’s-eye view of the Tube 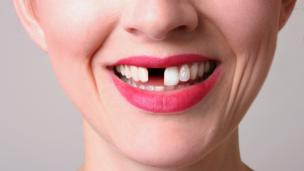