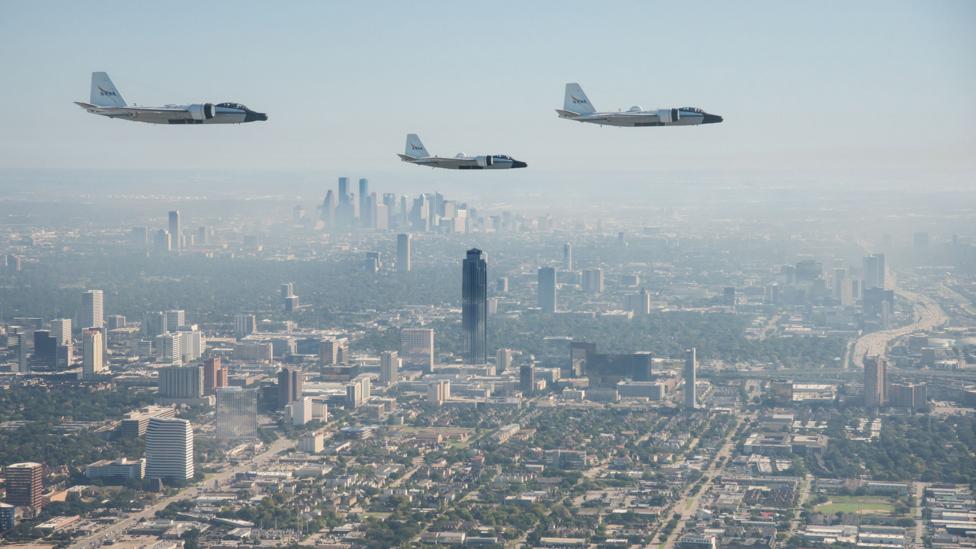 By Stephen Dowling 10th March 2016
The Canberra bomber was designed way back in the 1940s. So why is Nasa still using three of them today? BBC Future investigates.
I

In 1944, with World War Two entering its final stages, the British Air Ministry set out requirements for a new bomber, one that would be able to fly at high speeds and high altitudes.

The ministry planners couldn’t have guessed that the aircraft that would eventually win the tender, the English Electric Canberra, would still be soldiering on more than 70 years later – flying science labs conducting research for Nasa and other US government agencies.

So why isthe US space agency – which has operated some of the most cutting-edge aircraft in aviation history – still using an aircraft that whose design comes from the dying days of World War Two? 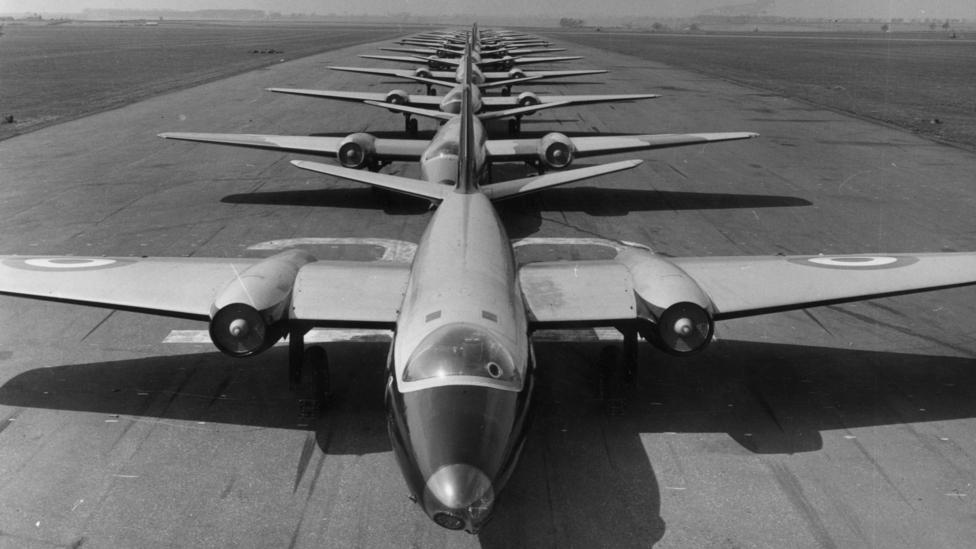 Canberras were designed as bomber aircraft, but the design proved useful for other roles (Credit: Getty Images)

The Canberras used by Nasa are an American version, designated WB-57, and based on the B-57 model built under licence by aircraft-maker Martin in the 1950s; they constructed some 400 between 1953 and 1957. Nasa’s examples are the very last still on active service – some 33 years after the US Air Force retired theirs. Recently, the three remaining Canberras were pictured flying in formation over Houston, where they are based.

Nasa’s Canberras are a part of the agency’s Airborne Science Program (ASP), explains Charles Mallini, who is the program manager for Nasa’s Canberra fleet. “The ASP is responsible for providing aircraft systems that further science and advance the use of satellite data,” he says.

Their ability to fly high makes them suitable for a variety of jobs, says Mallini, many of them in support of Nasa satellites. These include calibration tests to help fine-tune measurements from satellites, test new sensors before they are launched into space, and obtain high-altitude measurements which can then be crosschecked with readings taken from satellites in orbit. The Canberras have flown a range of science instruments, measuring atmospheric chemistry, cloud particles, cosmic dust, soil moisture, sea ice elevation and more, says Mallini.

The Canberra proved to be a good design right from the very start – David Keen, RAF Museum

That Canberras are still flying is a tribute to the aircraft’s design, which is all the more impressive given that the Canberra is from the very first generation of jet aircraft – a time when aircraft designers were struggling to deal with the enormous issues that came from travelling at such high speeds. And it’s even more exceptional because the Canberras are doing a job that was undreamed of when the aircraft first entered service. 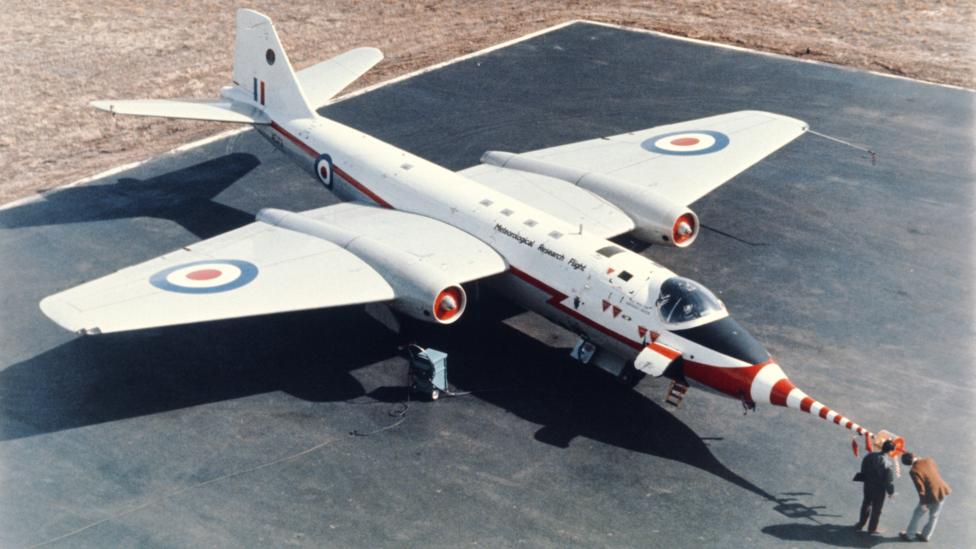 The English Electric Canberra began life with the Air Ministry’s 1944 call for a new, fast bomber, and first flew in 1950. It was a sleek and graceful design, looking very much like the fighter aircraft of the time; the pilot and navigator sat next to each other in a fighter-style cockpit, while a bomb aimer peered through the Perspex nose of the aircraft. The Rolls-Royce Avon engines, a design that would later power Britain’s supersonic Lightning fighter, were housed in aerodynamic nacelles, one on each of its thick wings. The plane’s wingspan was almost exactly as long as the aircraft’s fuselage, an oddly neat detail in an aircraft built to be fast, reliable and easy to fly. In 1957, a Canberra broke the record for highest altitude, when it reached a height of 70,310ft (21,400m).

“The Canberra proved to be a good design right from the very start,” says David Keen from the RAF Museum, Hendon.

“It could go quite fast for a bomber, and go higher than any other bombers could go,” he says. The Canberra didn’t carry any defensive guns like World War Two-era bombers had – it was supposed to fly so fast that enemy fighters simply wouldn’t be able to catch up.

“These characteristics are responsible for its long career in service,” says Keen. “And they also help to make it a very good reconnaissance plane.” Bombers tend to be built so they’re easy to fly and easy to keep stable – which helps when you’re trying to accurately bomb a target – and that also tends to make aircraft a good choice for reconnaissance missions. 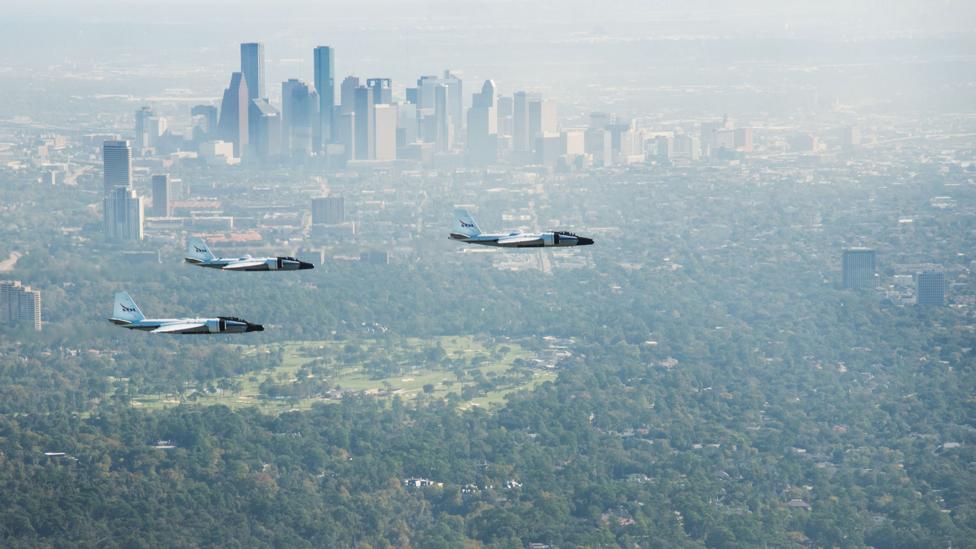 The three Canberras are only kept in the air thanks to technicians stripping spare parts off retired aircraft (Credit: Nasa/Flickr)

Early on, a Canberra could carry several high-performance cameras which could allow it to film high above enemy air defences; it also contained sensors that could listen in on electronic communications. As its combat career waned, this is the role that essentially kept the Canberra flying long past its projected life – and made it suitable for the kind of work it now carries out for Nasa.

The RAF phased out its bomber version of the Canberra in 1972, but the aircraft was to soldier on as a reconnaissance plane for another three decades. The Canberras flew high-altitude observation missions in Northern Ireland, Bosnia and Kosovo, and also were also used in Afghanistan the early 2000s, some 50 years after the first Canberras entered service.

The Canberra’s design could withstand many modifications

Former RAF wing commander David Bruce, a member of the Royal Aeronautical Society,  flew in Canberras in the late 1960s, based mostly on the Mediterranean island of Malta and flying in the photo reconnaissance version. “As a navigator I loved to be able to look out and see ahead and under the aircraft whilst all the time still having the benefit of being strapped into an ejection seat,” he says.

“I think a great deal of my enjoyment of flying the Canberra was associated with the recce role – and particularly during photographic survey work for map-making purposes. During my time on the squadron we carried out surveys of the Gambia, Sierra Leone, Kenya, the Maldives and parts of UAE.

“When things were going well it handled beautifully – it had good visibility, and flying at low level demanded a lot of the pilot.  Its … handling had to be very closely watched and demanded a lot of concentration and so that might add to a sense of achievement.”

Bruce flew many reconnaissance training missions at very high altitude over the Middle East, where “the contrast between the topography – the Gulf coastline, the odd huge lake, mountains of all shapes and sizes and differing colours and the sheer isolation of many villages – all were exposed in great relief.”

Nasa’s Canberras are carrying out similar work to the kind Bruce did, though the aircraft themselves look somewhat different, a testament that the Canberra’s design could withstand many modifications. The wings of the blue-and-white painted Nasa examples are almost twice as long as those on the original aircraft, which help keep the aircraft aloft in the thin air at high altitudes.

“What makes this aircraft stand the test of time is its unique capabilities of aircraft ceiling, range, max payload and aircrew,” says Mallini. The ER-2s (based on the U-2 spyplane) that Nasa also uses may be able to fly higher, but they can’t carry as much equipment as the Canberra. Nasa’s Global Hawks, meanwhile, can fly for four times longer but can only a quarter of the payload.

The Canberras are so good at their job that there is no plan to retire them. “In fact, we are always looking at ways to increase their capabilities from the standpoint of endurance, communications systems, and data acquisition. All three aircraft have recently completed a set of upgrades which include a new autopilot system, updated ejection seat system, new data acquisition system, satellite communications, and upgraded communications system,” says Mallini. In fact, as recently as 2013 there were only two Nasa Canberras – until Mallini’s unit brought one back from retirement. The plane, known as 63-13295, had been retired since 1972; it spent some 20 years in the famous Arizona Boneyard on the outskirts of Tucson before Nasa decided there was enough work to warrant a third aircraft. When the plane – now known as Nasa 927 – carried out its first test flight in August 2013, it was the first time it had flown in 41 years. 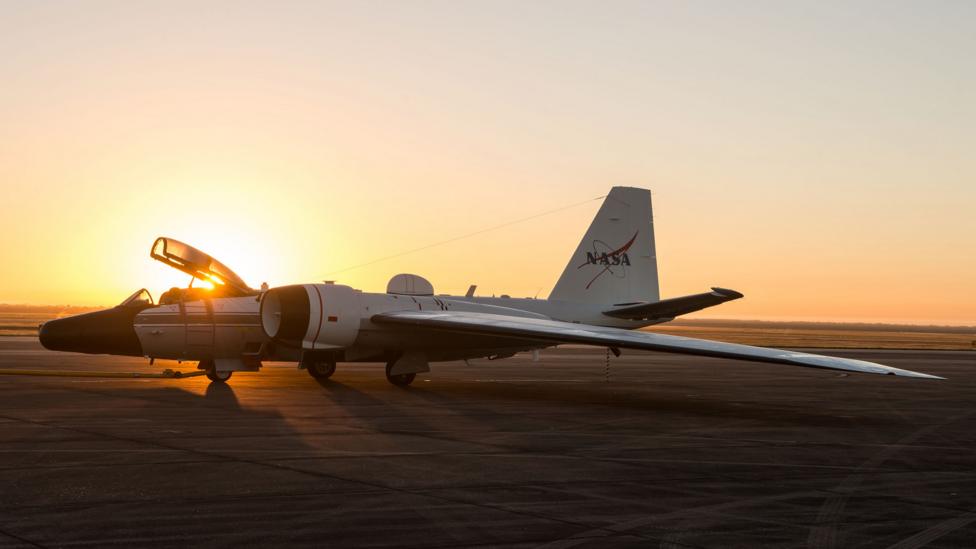 Nasa has no plans to retire its three WB-57s (Credit: Nasa/Flickr)

Keeping this fleet of old aircraft in the air, however, is not easy. “Parts acquisition is one of our biggest challenges since many of the parts on the aircraft are no longer available and the vendor has long since shut down,” says Mallini.

“We have scavenged parts from the aircraft that have been stored at Davis-Monthan Air Force Base outside of Tucson, Arizona and even from museum aircraft from around the country. When parts are no longer available our engineering team has to design or procure a functionally similar replacement part or back engineer the part. This can easily present a number of design challenges for the team.”The fuel tanks caps, for example, had been taken on and off so many times that they no longer fitted tightly “allowing the caps to come loose in flight”, says Mallini. The problem is, the company that had made them had long-since closed down. The support crew had to reverse engineer a replacement, make an engineering prototype and then make 100 new examples.

In RAF service, the Canberra’s work is now largely done by Tornado bombers and unmanned aircraft. Their retirement brought to an end one of the golden eras of aviation, one that can seem unimaginably low-tech by modern standards.

“The Canberra had a wooden tail,” Keen says. “So that meant that the RAF had to have carpenters right up until the aircraft came out of service.” From such humble beginnings, a Nasa legend has been made.

Join 500,000+ Future fans by liking us on Facebook, or follow us on Twitter, Google+, LinkedIn and Instagram. This story is a part of BBC Britain – a series focused on exploring this extraordinary island, one story at a time. Readers outside of the UK can see every BBC Britain story by heading to the Britain homepage; you also can see our latest stories by following us on Facebook and Twitter.

future
1The greatest test pilot in history?
future
2Are these weird clouds ‘sonic booms’?
In Depth
3The Nazis’ futuristic 'flying wing'
In Depth
4How a Cold War bomber flew again
Around the BBC