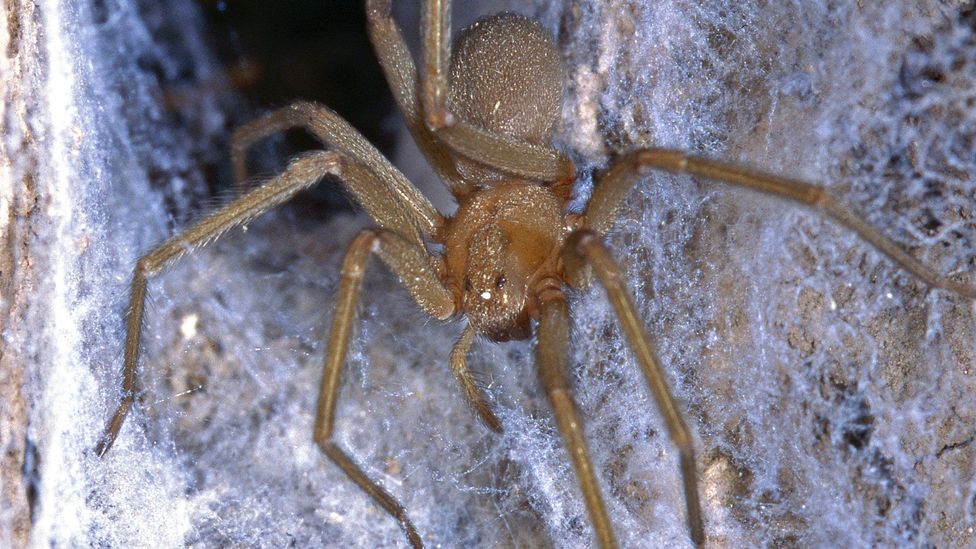 By Henry Nicholls 14th April 2016
If you found Arachnophobia scary, you may not want to read on…
I

It is close to midnight as I enter the Finnish Museum of Natural History in Helsinki by a back door. I am on the hunt for a deadly spider.

As is fitting for a national institution, the museum boasts a significant collection of botanical, zoological, geological and palaeontological specimens from all around the world. But for more than 50 years, it has also been home to a thriving population of the Chilean recluse spider (Loxosceles laeta), widely considered to be the most venomous of its kind. And no one really knows how it got there.

Taxidermist Janne Granroth unlocks the door to the temporary exhibition space on the ground floor. A recent exhibition involved bringing some tree trunks into the room, he says. “This brought in a lot of insects and the spiders had a field day.”

The room is not currently open to the public and is being used as a storage space, filled with packing crates, foam board, picture frames and a menagerie of stuffed animals, including a buffalo, a couple of battling zebra, a springbok and an ostrich with its slender neck taped to a metal stand.

Granroth proceeds with confidence, opening a huge drawer and lifting up sheet after sheet of plasterboard, clambering over a pile of wooden planks and getting down on his knees to shine a light beneath a cupboard. I am more cautious. As I squeeze past an alpaca-like creature, I have mixed emotions, simultaneously impressed by the softness of its fur and troubled by the thought that the coat of a South American mammal might be a particularly suitable hang out for a Chilean recluse spider. 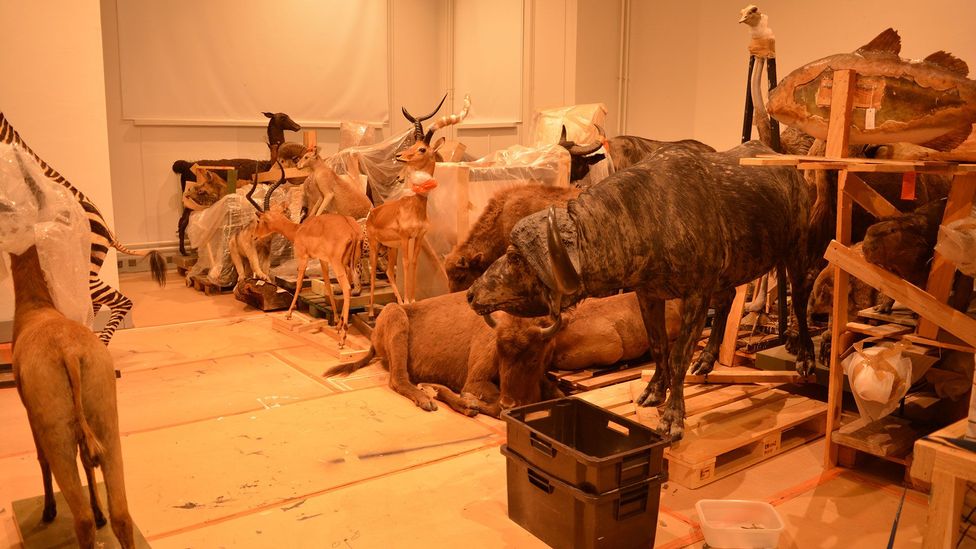 Curators come across the reclusive spiders when they begin to move their exhibits (Credit: Henry Nicholls)

The species is native to South and Central America, living under rocks, inside tree holes and other reclusive spots. But how did it travel more than 13,000 km to inhabit a museum basement just a few hundred kilometres shy of the Arctic Circle?

There were spiders everywhere, in cupboards and drawers, on desks and shelves and behind pictures on the walls

In around 1963, curators became aware of the presence of some kind of exotic spider in the museum. Following a sudden explosion of sightings in the winter of 1970, they decided to carry out a systematic search, which revealed an infestation on the whole ground floor of the building. There were spiders everywhere; in cupboards and drawers, on desks and shelves and behind pictures on the walls.

“In a small kitchen room the spider was exceptionally abundant,” wrote ecologist Veikko Huhta, who published a paper on the infestation in 1972. He and his fellow curators removed around a dozen specimens from the cupboards and drawers in the staff kitchen, but within a few days the spiders were replaced by new ones “apparently coming from spaces beneath and behind the cupboards”.

I fancy a peek inside the cupboards of the staff kitchen, but in preparation for my night at the museum, I discover that it no longer exists. “It was demolished in 2004 when we renovated the building,” says entomologist and senior curator Jyrki Muona. The project involved excavating down two floors to create new storage space and there was so much disruption that the spiders seemed to have disappeared for a time. This caused some concern among the staff, many of whom had become attached to the eight-legged visitors. As it turned out, the creatures were just waiting to inhabit the newly excavated space.

In his paper, Huhta advanced the theory that the recluse spider had made it to Finland in a consignment of apples from Argentina. But Muona has an alternative explanation. “In the 1960s, the museum had some live rodents for research purposes and their enclosure was dressed with wood chips originating from South America,” he says. 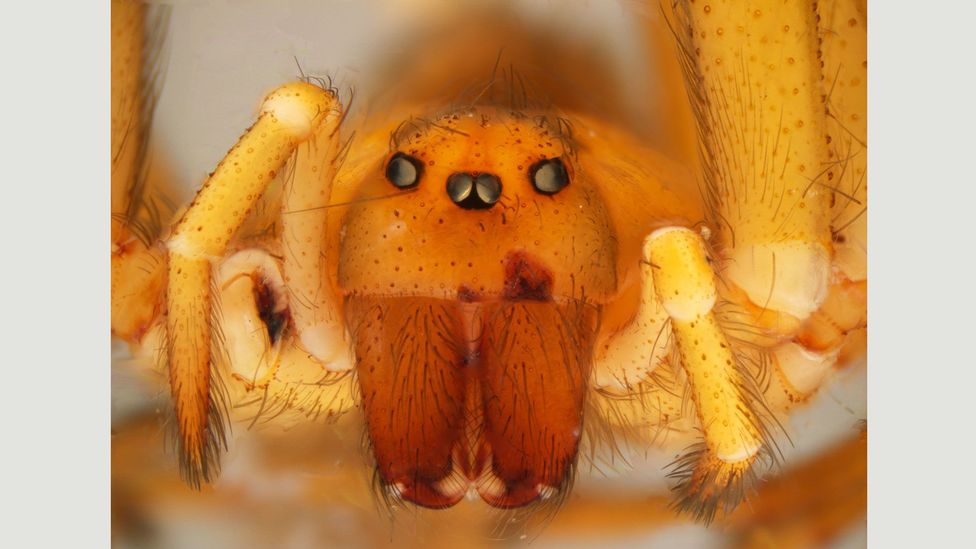 The Chilean Recluse Spider is the most poisonous of its kind (Credit: Ken Walker/Museum Victoria)

From what we know of the biology of the Chilean recluse spider, their ability to survive considerable hardship should come as little surprise. In the 1970s, a retired entomologist in Los Angeles carried out some peculiar experiments that leave little doubt about the species’ resilience.

When a female spider he’d captured in the Sierra Madre outside LA gave birth to 48 spiderlings, he reared each of the offspring in isolation, feeding them on a diet of mealworms and other assorted insects until they reached maturity. Then he withdrew all food and water, testing their ability to withstand starvation. The males were the first to die. But 14 females survived total starvation for an average of 453 days. One spider – a female – lived without food or water for 755 days. That’s over two years.

The species is productive too. Each female can turn out up to fifteen egg sacs in its lifetime and each egg sac will typically contain between 50 and 150 eggs. It is easy then to see how a population could thrive, feeding on tiny insects in the quiet, dark, climate-controlled basement of a museum.

The Chilean recluse spider is also considered to be the most dangerous of all the 100 or so members of the Loxosceles genus. Its venom contains particularly large quantities of sphingomyelinase D, an enzyme that cleaves sphingomyelin, a compound in cell membranes. A bite can result in such damage to the skin and underlying tissue that it leaves a large and ugly scar. If the venom gets into the blood stream, it can cause serious systemic problems and even result in death.

A spider bit him on the arm when he was undressing

None of this seems to trouble the staff at the museum. The Chilean recluse spider, as its name suggests, likes to hide. If disturbed, it will vanish from sight with extraordinary speed. If a member of the visiting public were to get bitten it would be like winning the lottery, one curator tells me. Just a little less fun.

In 50 years, there has only ever been a single biting incident, says Muona. It happened during the renovation, he explains, when one of the construction workers hadn’t followed the appropriate safety protocol. A spider that had become trapped in his clothing bit him on the arm when he was undressing. Mercifully, there was no lasting damage. 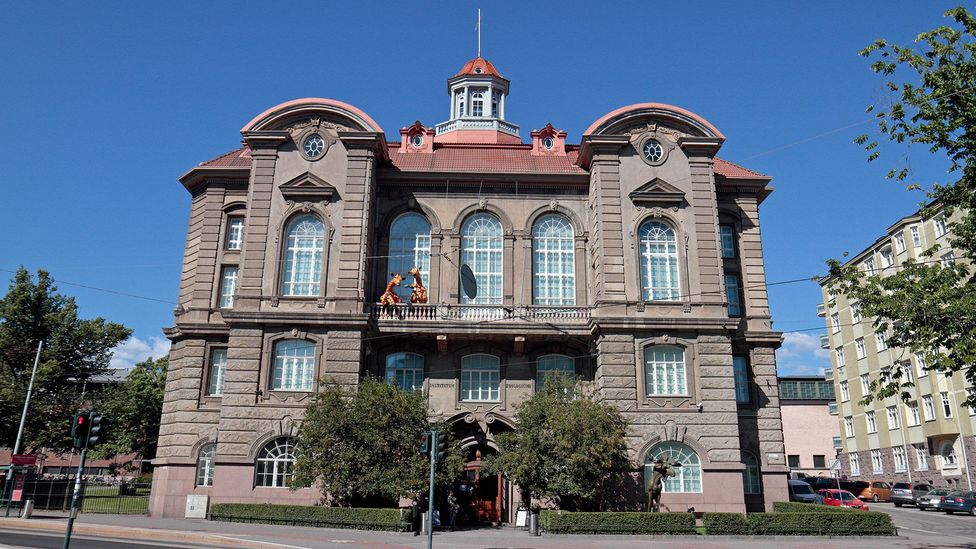 The museum staff can't help worrying that the spiders may have wandered further afield (Credit: Alamy)

During my nighttime hunt with Granroth, we find half a dozen spiders without too much trouble. None of them is very large, at most 2cm from leg tip to leg tip. But, he assures me, there are some big spiders in the room with us. Granroth separates his thumb and forefinger a distance of around 10cm. “When you see a lot of them every day, you get used to them,” he says.

I know this to be true, because after several uneventful sightings in the space of just half an hour, I am conscious of becoming considerably bolder, crawling across the hardboard that lines the floor to push my camera lens to within a few centimetres of a specimen. On my way out, I am still looking, scouring the skirting boards for webs and legs.

Back outside, as I pick my way carefully across the icy pavements of the city, I can’t help wondering whether the Chilean recluse spider might have travelled further than the museum. Back in 1971, Huhta had “searched for it, without success, in the basement of the block of flats opposite the Department, on the other side of the street.”

Today, however, there are more opportunities for the spider to spread than ever. During the 50 years that the Chilean recluse spider has been living in Helsinki, the city has expanded into the hard, easy-to-mine bedrock that lies just beneath the surface. According to a report published by the city’s planning department in 2009, “approximately 9 million cubic metres, consisting of about 400 separate facilities or tunnels, have already been built under the city.”

As I pass Finland’s parliament building, less than 200m from the Museum of Natural History, I recall Muona’s views on the matter. The Chilean recluse spiders could easily have made it that far, he had said. “I’m waiting for one to bite the prime minister.”