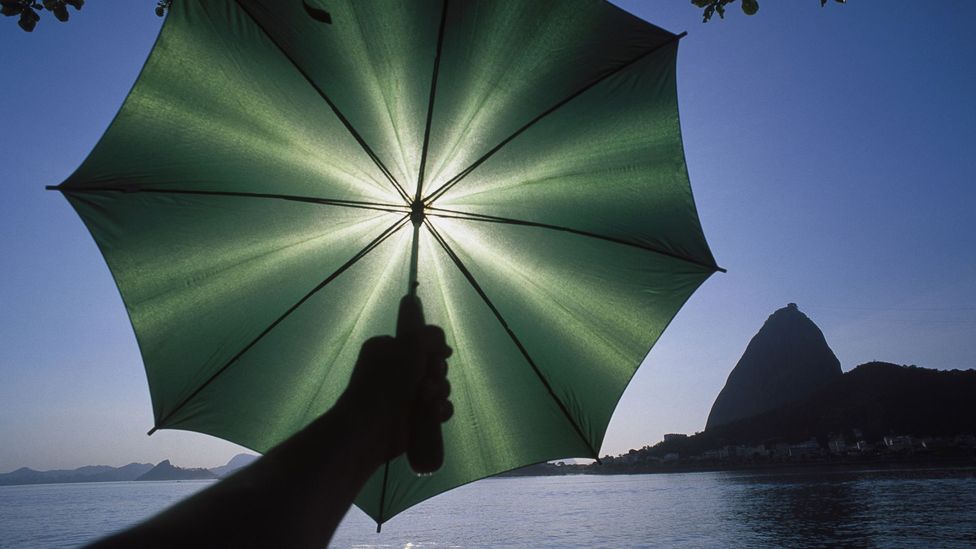 By Zaria Gorvett 26th April 2016
Our rapidly warming world could cause serious problems for civilisation in the decades to come. But could a giant space umbrella help cool down our planet? BBC Future investigates.
T

The race to find a solution to a rapidly warming world is one of the most pressing challenges facing our planet.

One proposal to try to halt this warming is literally out-of-this-world: a giant, space-based sunshade. We’re already modifying our climate by accident, so why not do it by deliberate geoengineering?

It’s a radical idea, and it just might just work. Reducing the amount of light reaching our planet could cool the Earth quickly, even with rising carbon dioxide levels. While the asteroid which helped wipe out the dinosaurs blocked out 90% of the Sun’s rays, we would need to divert just 2-4%, it's believed, to take the Earth back to its pre-industrial climate.

Space sunshades have support in high places, from the Royal Society to Nasa, to the European Union. It’s even roused the interest of the most respected authority on global warming, the Intergovernmental Panel on Climate Change (IPCC).

The concept may be increasingly mainstream, but how we’d do it sounds more far-fetched. To uniformly cool the planet in a system that’s always on the move, the shade would be installed in an area of outer space that’s balanced between the gravity of the Earth and the Sun – the L1 point – about a million miles away.

First conceived by engineer James Early in 1989, the original design was a vast, 2,000 km-wide glass shield – a structure so heavy, it would need to be constructed on the Moon. More recent suggestions include clouds of Moon dust, 55,000 wire-mesh mirrors or a planet-girdling ring of tiny umbrellas. And just when you thought they couldn’t get more ambitious: how about moving the Earth further away from the sun, with an explosion equivalent to five thousand million million hydrogen bombs. 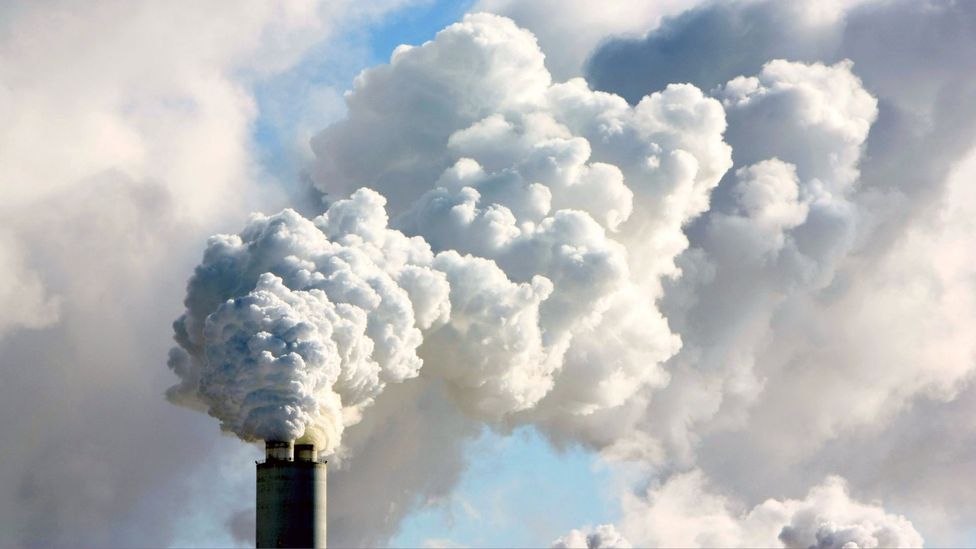 The climate is being modified by human activity - but could an answer lie in outer space? (Credit: Getty Images)

By far the greatest challenge is getting the sunshade into outer space. It currently costs at least $10,000 (£6,930) to launch a pound of payload into orbit, and we haven’t put a man on the Moon since 1972. To be a viable option, the technology would need to be wafer-light and it would have to be assembled here on Earth.

Astronomer Roger Angel believes he has the answer: 16 trillion flying space robots. Each would weigh about a gram – the same as a large butterfly – and deflect sunlight with a transparent film pierced with tiny holes. To keep the burden low, the lenses would be less than a hundredth of the thickness of a human hair.  “You can’t stop sunlight with anything thinner than that,” he says.

The robots would steer themselves into orbit by solar-powered ion propulsion, a technology already used by the European Space Agency's Smart-1 Moon orbiter, to form a cylindrical cloud 60,000-miles wide. After that they’d need regular nudges from ‘shepherd dog satellites’ to stop them crashing into each other or being blown off course by the sunlight they’re deflecting. “If you leave them alone they’ll drift off and eventually fall back to Earth,” he says.

In all we’d need to fire 20-million-tonnes-worth into outer space – still too heavy to be feasible by chemical rocket. Angel’s solution is so outrageous, for years it was thought to be impossible because it defied the laws of physics: a giant electromagnetic gun embedded in a mountain.

The system would accelerate cargo to launch at the mountain’s summit using a form of electromagnetic energy to convert electricity into thrust. Known as the Lorentz force, it already powers magnetic levitation, Maglev, trains, and the US Navy’s latest weapon. By side-stepping the need for fuel, the cost of launch may be as low as $20 (£13.90) per pound, enough to catapult the shade into orbit for just a few trillion dollars.

There’s just one problem: the technology doesn’t yet exist.

By far the easiest – and cheapest – option would be to emulate a natural disaster. The chilling effect of asteroid impacts and volcanic eruptions – like those which helped wipe out the dinosaurs – is mostly down to the emission of sulphur, generated by vaporising sulphur-rich rock. 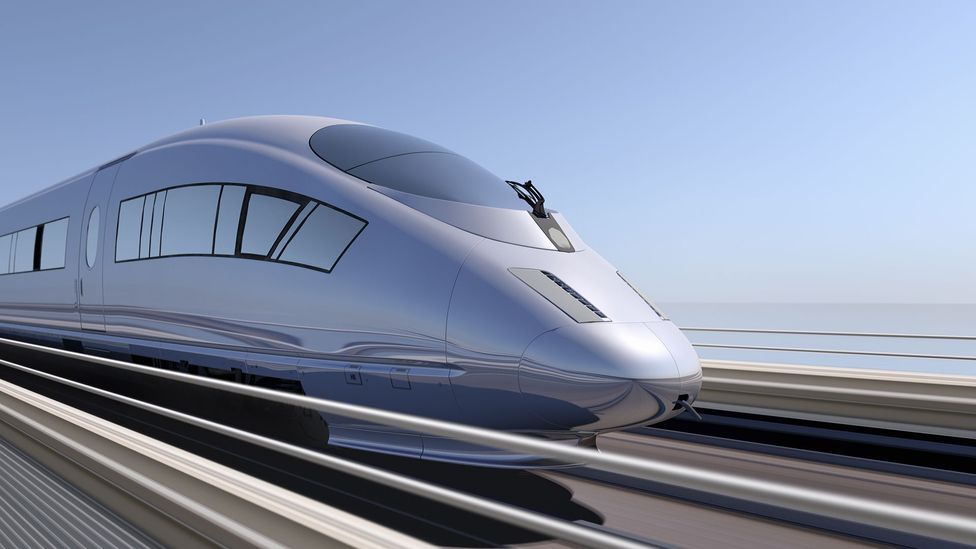 The proposed electromagnetic gun would use technology similar to that on maglev trains (Credit: Getty Images)

The particles stick around for years, increasing the density of the atmosphere and reflecting sunlight back into space. It happened as recently as 1991, when the eruption of Mount Pinatubo unleashed thousands of tonnes of sulphur dioxide gas. In the following years, Earth cooled by a few tenths of a degree.

It’s been estimated that just one kilogram of sulphur could offset the warming effect of several hundred thousand kilograms of carbon dioxide. In a global warming emergency, an artificial super-volcano might be just what the planet needs.

Whether it would work in practice is not quite so clear-cut. How quickly would the Earth cool down and by how much? Would it shade the planet evenly? After all, just a few degrees more cooling than expected could be catastrophic. Dr Matthew Watson, a volcanologist at the University of Bristol, has other concerns. “People talk about, ‘Oh we might accidentally cool it to -20C’ or something like that and I think that’s nonsense. We know what volcanoes do to global temperatures pretty well.”

According to Watson, the real risks lie in the unintended consequences. Take ozone, the chemical which shields the Earth from cancer-causing ultraviolet rays. The 1987 Montreal Protocol banned the use of ozone-eating chemicals, called chlorofluorocarbons (CFCs), which were once widely used in refrigerators and spray cans. And yet every spring, a hole appears in ozone layer over the Antarctic, as ice clouds provide a surface on which left over chlorine compounds can destroy it.

And sulphate particles, as it turns out, are extraordinarily effective ozone-destroyers. Professor Alan Robock from Rutgers University authored a report on the risks of such interventions. “We’ve actually observed widespread ozone depletion after two large volcanic eruptions. It would be going on across the world, all the time,” he says. 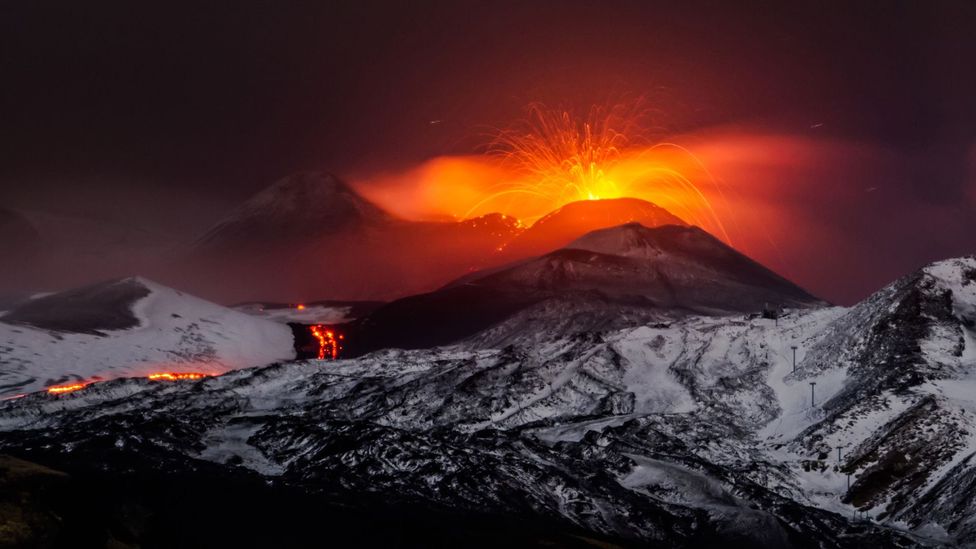 Volcanoes, spewing sulphurous material into the atmosphere, can have a cooling effect (Credit: Getty Images)

Then there’s the sky itself. Even on a sunny day, the light-scattering particles could turn the blue sky white. With a sulphate sunshield, there would be more ‘diffuse radiation’, as opposed to direct sunlight. “You see it on a cloudy day. You can’t see the Sun, but it’s still light,” Watson says. However, this unnerving prospect comes with a silver lining.

Though volcanic eruptions can inject vast amounts of greenhouse gases into the atmosphere, the build-up of carbon dioxide actually slows down. No one knows why, but one possibility is that plants prefer whiter skies; they grow better because they don’t get so hot. “It’s actually quite a good argument against this form of intervention. It’s very difficult to predict the outcome because the system is really, really complicated,” he says.

With these uncertainties in mind, Dan Lunt of the University of Bristol, in the UK, and colleagues set up a climate-modelling study to predict the sunshade’s climatic effects.

If you reduce the global temperature all the way back to pre-industrial, then you tend to over-dry the planet – Ben Kravitz, climate scientist

The model included three scenarios: the pre-industrial world, a ‘greenhouse world’ which has four times the current levels of atmospheric carbon dioxide and is 6C warmer, and ‘sunshade world’ with the same high CO2 but the strength of the sun reduced by 4%. That’s around 55 fewer watts per square metre, roughly the same amount as a light bulb.

They found that the sunshade could compensate for the warming in greenhouse world exactly – the geoengineering was a success. But it wasn’t all good news. Compared with pre-industrial times, the tropics were 1.5C cooler, while high latitudes were warmer by 1.5C. Even with a space sunshield, there’d be less sea ice. That’s because the planet would be shaded evenly. In the tropics, which receive substantially more sunlight than the poles, a 4% reduction amounts to more lost sunlight.

The 'sunshade world' was also drier, with 5% less rainfall on average. “If you reduce the global temperature all the way back to pre-industrial, then you tend to over-dry the planet. The only way to combat that is to have a little bit of left-over global warming,” says Ben Kravitz, a climate scientist who wasn’t involved in the study. 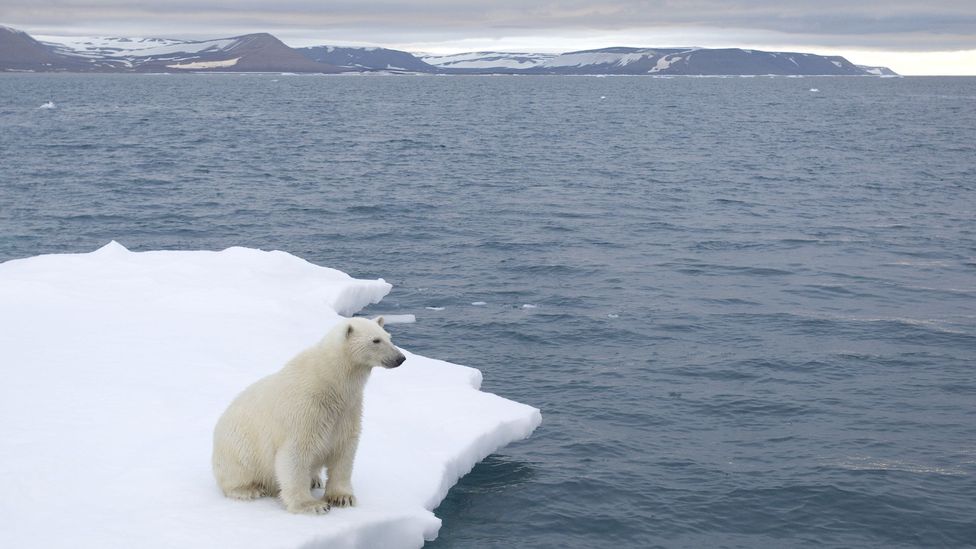 While the sunshade could cool the world, it might not cool polar regions as much as the tropics (Credit: Getty Images)

In the imperfectly engineered world, some countries would get a better deal than others. The sunshade could protect some areas from flooding, while inflicting droughts on others. “To get it up there there’d have to be a global effort, but in fact different countries would argue for a very different strength. There might be all sorts of political intrigue.” Lunt explained.

So could a space sunshade stop global warming? Engineering our way out of climate change could lead to, well, more climate change. Kravitz agrees. “There are some things we’ll never know, prior to going ahead and doing it. There’s still a lot of work to do before we understand what geoengineering can and cannot do.”

For Watson, it’s about weighing up the risks. “Ten years ago 8.5C of warming, which is almost like apocalyptic climate change, looked fanciful. Today it doesn’t.” Is it possible that under those circumstances we’d intervene? “I think we would. Should we be doing everything we can to make sure we don’t get there? Absolutely.”

Space Station
1What’s the cheapest way to go to space?
future
2The decision that saved Apollo 13
In Depth
3The alien-hunting space sub
Space Station
4Cold War spacecraft that never took off
Around the BBC