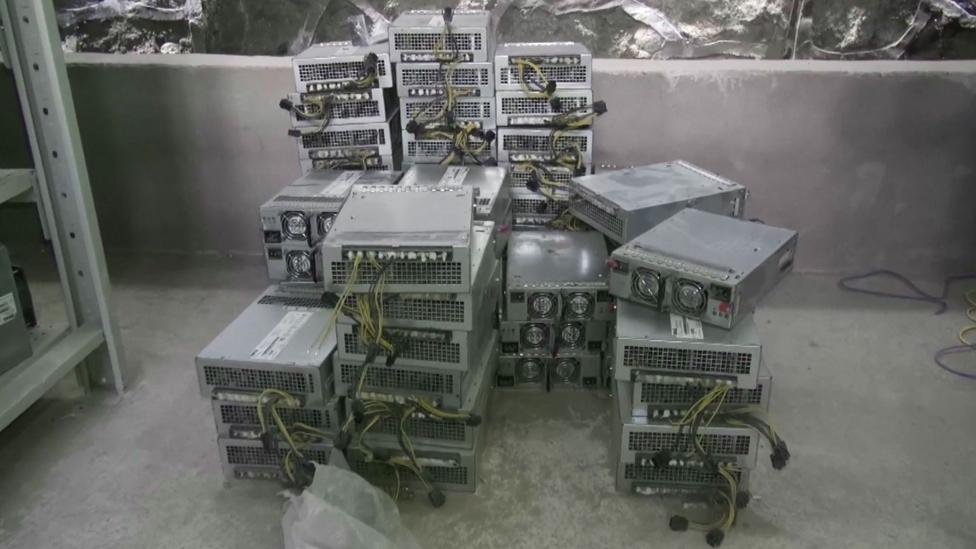 By Danny Vincent 4th May 2016
In China, savvy entrepreneurs are making millions a year by mining bitcoin. Danny Vincent visited one of the world’s biggest facilities of its kind to film the activity and people within.
O

On the edge of a tiny Chinese town is a strange building where you can get an insight into the future – and only a handful of people know what is happening inside.

I am on my way to visit one of the biggest bitcoin mines in the world: where up to $8m in digital currency is generated per year by solving complicated mathematical algorithms with computers.

The location is secret and I have been invited under the strict condition that I live onsite with the miners. The owners don’t want to broadcast their specific location, because while the Chinese government is neither officially pro or against bitcoin, the huge amount of money flowing from these mines is outside state control.

The town itself is so high up in the mountains that you have to bring your own cans of oxygen. Mobile phone signals frequently disappear around the mountains and valleys that surround the township. But high speed wi-fi makes video calls and chat apps the main mode of communication. 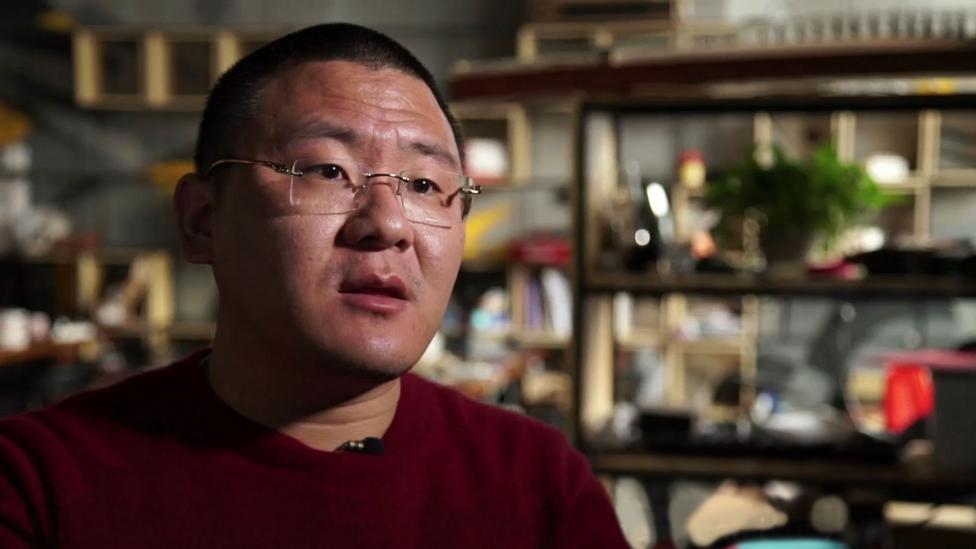 Chandler Guo, the co-founder of Bitbank, operates a large bitcoin mine in China (Credit: Danny Vincent)

My guide is 30-year-old Chandler Guo, the co-founder of Bitbank, and a bitcoin entrepreneur. Guo is the very definition of Chinese new money. His family ran a beef farm, became rich and he decided to invest in bitcoin. He has transformed this sleepy town into a hidden bitcoin economy.

“In the past China manufactured simple things like clothes, shoes and things like that. But in the future we will use technology to make products,” says Guo.

In the film below, Guo showed me inside the mine he has built:

Within the mine’s walls stand hundreds of computers shelved on rows. A team of workers live onsite: predominantly male, and made up of former farmers and fresh graduates.They live around six to a room in dormitories. Computer parts are sprawled across their floors and Chinese boy band posters are stuck on walls above their bunk beds.

One of them, Fang Yong, is a 21-year-old graduate who has been working as a miner for around a year. He rides a moped around town and, despite his rural background, dresses as a young Chinese urbanite. He’s fully aware of bitcoin’s potential. “Everyone says this technology is going to have a huge influence on the whole world,” he says.

The miners are rewarded with bitcoins for solving cryptographic problems that verify other bitcoin transactions across the world. Each time an algorithm is solved, “blocks” are added to the “blockchain” – a type of virtual book-keeping that ensures that every transaction is authenticated. 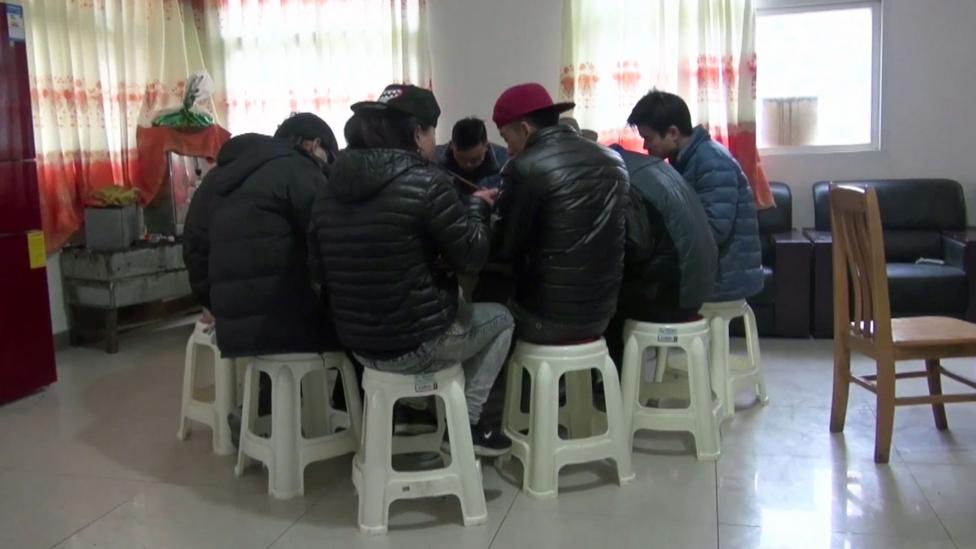 Miners live on site in apartments, and eat together (Credit: Danny Vincent)

Based on the current exchange rate, one bitcoin is worth approximately $450. “All day we mine 50 bitcoins,” says Guo. “24 hours this machine never sleeps.”

Guo started his operation only two years ago, and mines like his have boomed ever since. “Two years ago Chinese mining was just 40% of all the mining equipment in the world,” he says. “Right now it’s already 70%. So Chinese mining is very important.”

Guo has built two fully functioning mines in China and is building what he claims will be the largest bitcoin mine in the world – capable, once complete, of producing more than 30% of all bitcoin globally. 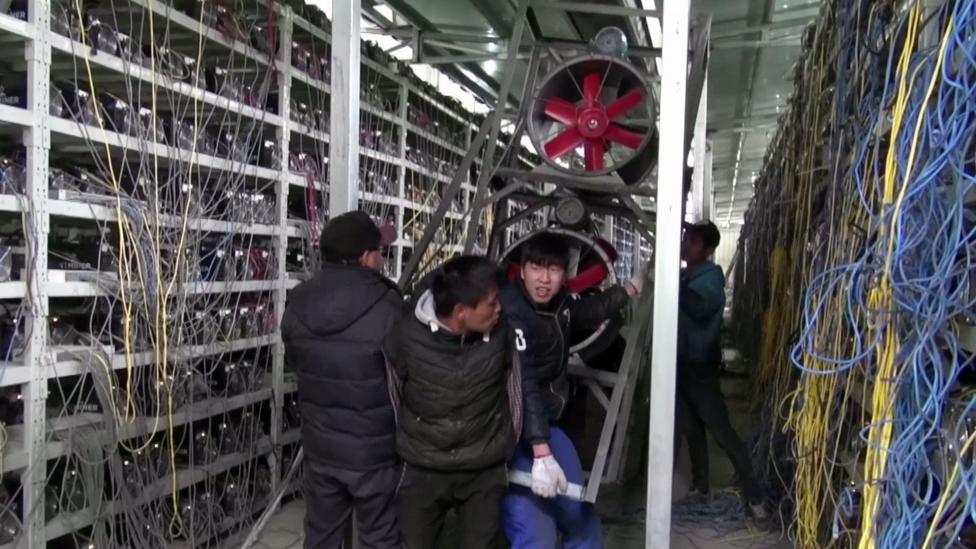 Hundreds of computers shelved on rows churn out about 50 bitcoins per day (Credit: Danny Vincent)

But there is competition. Much of the Chinese population is already using online currency such as Alipay or the WeChat wallet. The Chinese government has also recently announced its interest in developing an official digital currency.

There is also the possibility that organised Chinese bitcoin mining like Guo’s could threaten the future of the currency. At least that’s the view of a prominent bitcoin enthusiast, Mike Hearn, who in January claimed that “the experiment had failed”. He argued that China’s dominance of mining means that the majority of bitcoin transactions are verified in China, but that the slower internet connections used there are hampering the flow of the currency, which could prevent its popularity growing. This, he argued, would ultimately lead to bitcoin’s failure.

Guo is dismissive of Hearne’s comments. He says he remains optimistic about the future – and the potential for bitcoin to change established ways of using money. “For me it is a kind of freedom. Everyone and anyone can use it anywhere. It doesn’t belong to just one country. It is already crossing borders. It belongs to everybody,” says Guo.

Danny Vincent is a BBC video journalist. You can follow him on Twitter and Periscope on @dannydvincent