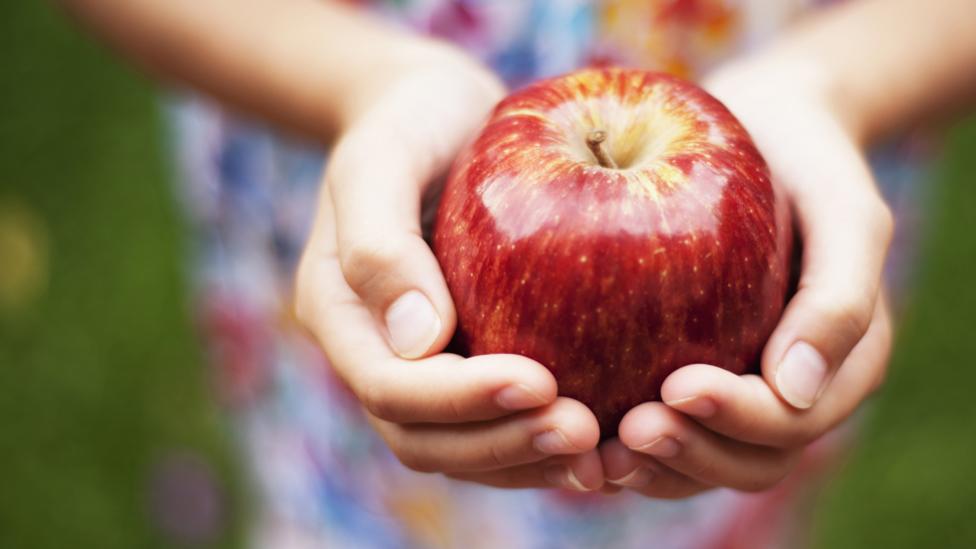 By Chris Baraniuk 24th May 2016
The apples that we buy in our supermarkets are very likely descended from Central Asian ancestors that still grow in the wilds of Kazakhstan. And the search is on to bring more of these exotic varieties to the world.
I

It was 1993 and US Department of Agriculture (USDA) horticulturist Phil Forsline was flying over the magnificent mountain ranges of south-eastern Kazakhstan in a helicopter. Forsline had not been to the huge Central Asian country before; with the recent fall of the Soviet Union, this was his first chance to visit its wild forests. It was here, scientists now believe, that the ancestors of the apples sold in supermarkets around the globe originally evolved. Forsline was on a quest to find out what was really out there, in those mountain gardens.

In 2013, over 80 million tonnes of apples were produced worldwide. Half of them came from China. In the United States alone, the wholesale value of the apple crop is worth nearly $4bn (£2.76bn). It’s obvious that people have their firm favourites from the many varieties. Consumers around the world select from crunchy, slightly sour Granny Smiths or go for a sweet and mushy Red Delicious.

But some believe that the forests of Kazakhstan still hold many genetic secrets that could help us create even better apples. Central Asia, indeed, was the cradle of a key species – Malus sieversii. And in those wild Kazakh forests today, M. sieversii still grows. The gardeners who look after these crops are a little out of the ordinary – bears who eat the fruit and scatter the seeds in their droppings. 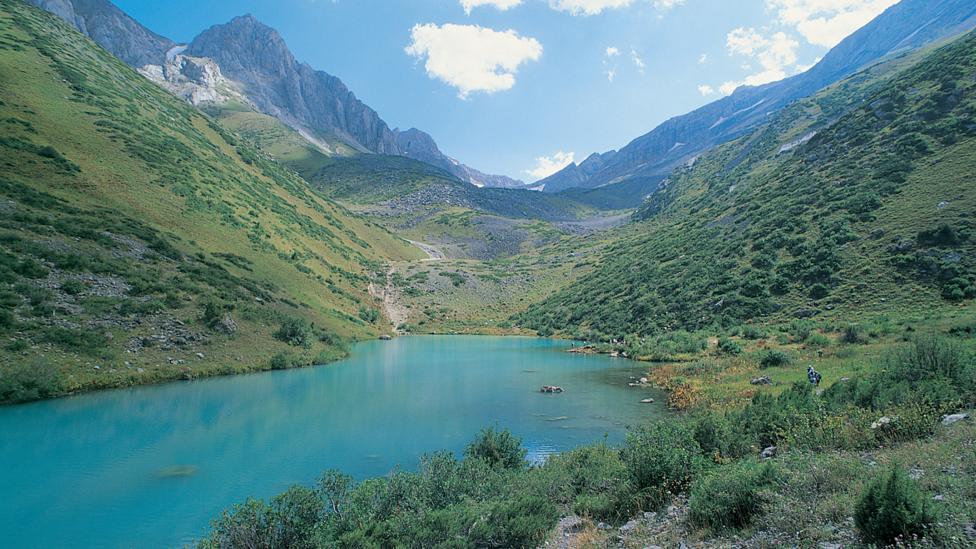 Thanks to help from a local guide, Aimak Dzangaliev, the group knew the best places to look. Dzangaliev, now nearly 100 years old, is a botanist in Almaty who for much of his life has been championing the virtues of Kazakh apples.

“We had some pretty hairy experiences,” says Forsline. “But we survived.” He went back in 1995 and 1996, but by then the cost of fuel was so high they travelled by road instead.

“We took these long rides in buses or four-wheel drive vehicles and it was very tiring because sometimes we would go off to this northern site and we didn’t get to that site until three in the morning,” he recalls. “And then we had to get up at six and start our collection.”

It was like a garden of Eden – Phil Forsline, US Department of Agriculture

The team’s objective was to collect seeds from as many apples as possible. Along the way, they would taste each one and make notes about its texture, colour and flavour as well as the habitat in which it was found. They also carried a GPS device so that the origin of each seed was accurately mapped.

“It was like a garden of Eden,” remembers Forsline. “We came across trees that had fruits that ranged from 25mm up to 75mm in diameter – there was a big range of fruit sizes and fruit quality.”

Some tasted quite sour and off-putting, but every so often one of the team would bite into something that “you could have on a supermarket shelf”. Occasionally, the flavours were wonderful. Forsline tasted apples that had a hazelnut-like flavour. And there were some with an aniseed or liquorice quality.

Others who have tasted wild apples in Kazakhstan report fruits that taste vaguely of sweet honey – or even berries. Depending on which plants were “bred” together by the bees that randomly pollinated them, the genetic make-up of any given fruit would be slightly adjusted. This process, as with all wild fruit, results in a special mix of chemical compounds and volatiles in the apple itself that are responsible for these unique flavours. 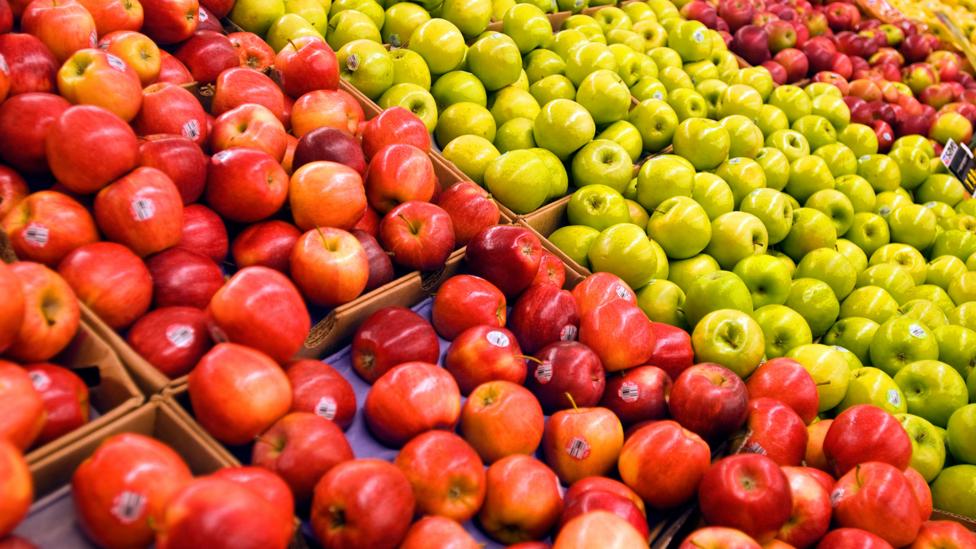 The apple market in the US is worth some $4bn a year (Credit: Alamy)

Over three trips and with seeds from an earlier expedition by his colleague Herb Aldwinckle in 1991, Forsline and the USDA gathered more than 130,000 individual seeds from about 1,000 trees. They are now part of a gene bank in Geneva, New York, available to researchers around the world who have, ever since, been trying to crack the secrets of Kazakhstan’s treasure trove of apples.

The USDA team wasn’t the only group that travelled to the forests. John Selborne, Earl of Selborne, is a British apple farmer who has managed an orchard in Hampshire, England for 40 years. In 2010, he visited the forests in the Tian Shan mountains near Almaty.

“It is a remarkable sight,” he says. “You go into these forests and you find that the apple is the predominant species. It’s totally chaotic because everything is intertwined, they’re difficult to walk through.” Some of the fruit tasted by Selborne were “disgusting” while others, he remembers fondly, were “delicious”.

There have been some interesting traits found with the Kazakhstan material that we are trying to capture – Jim Luby, University of Minnesota

Selborne, like Forsline, noticed that some of the trees were curiously free of diseases, like canker or scab, present on others in the area. And there were some growing in surprisingly arid places.

“There were clearly apples there which had evolved to be very resistant to drought,” he says. “That’s a trait that could be very helpful.”

Not only could apple farmers in other countries harness the unusual flavours of the Kazakh fruits, then, in theory they could also breed in whatever genetic advantages there are in terms of disease and drought resistance. That’s a long process, however.

Jim Luby at the University of Minnesota is partly responsible for the success of the Honeycrisp cultivar of apples. It’s an apple that costs at least twice as much as many other common varieties in US supermarkets, but consumers can’t seem to get enough. In 2014, it was one of the three best-selling apples in America. It has a characteristic sweetness and crunchiness, but is also slightly tart. What’s more, the apple has unusually large cells which, when crushed after the fruit is bitten, burst and cause an outflow of juice. It all makes for a much more satisfying eating experience. 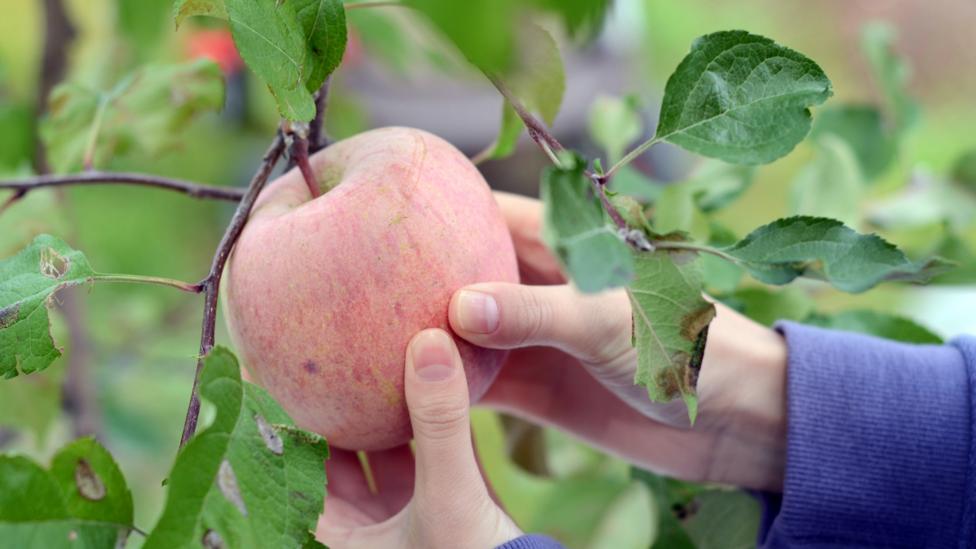 The Kazakh forests contain a wide range of apples that the West has not yet encountered (Credit: Getty Images)

“There have been some interesting traits found with the Kazakhstan material that we are trying to capture,” says Luby. “One of them is resistance to apple scab which is a major fungal disease.” Every spring, Luby and his colleagues pollinate their apple plants. “What we do in apple breeding is we simply take the place of the bees,” he jokes.

The process involves sealing the flowers of the “mother” tree so that pollen cannot be introduced by insects, only humans. They choose pollen from the tree that has been designated the “father” and, every spring, pollinate the plants by hand. This task alone consumes weeks, but seeds from the resulting fruit in the autumn can be collected, germinated and nourished as they grow into new trees able to produce their own fruit. That can take five to eight years.

And for commercial breeders, the pressures are stark. It could cost around $30,000 (£20,570) for just one acre of new trees, estimates Luby – with no guarantee of profit.

And when compared to, say, grapes, which are constantly analysed thanks to their importance in the wine-making industry, there is a vast number of unknowns about exactly what compounds are key to making a perfect-tasting apple. Luby adds that chromatography, in which chemicals in the fruit can be separated and analysed, has become much quicker and more useful in recent years. This could theoretically help the development of specially flavoured apples bred from the genetic material collected by Phil Forsline and his team.

In the meantime, there are other ways in which Kazakh apples may make an impact on the world market. 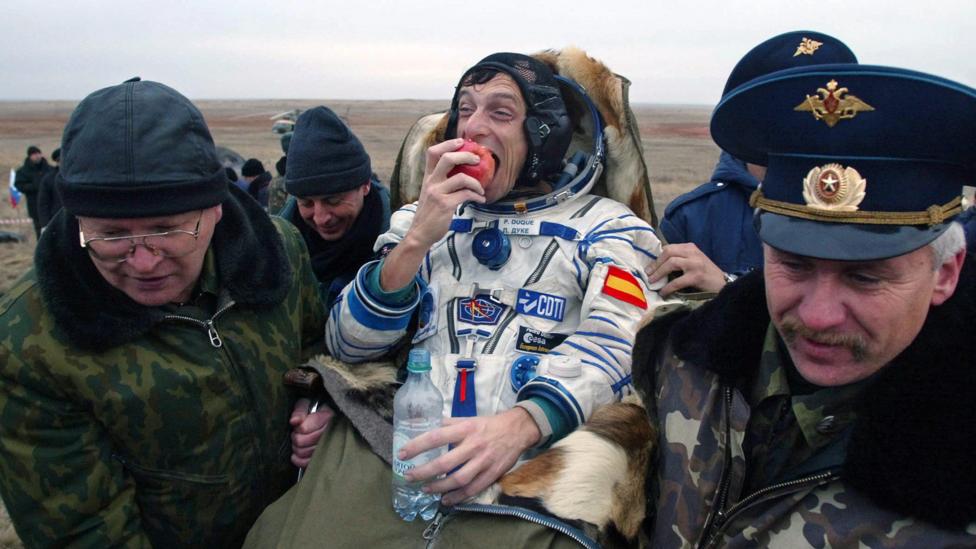 Cosmonauts returning to Earth near Kazakhstan's Baikonur are given apples to celebrate touchdown (Credit: Alamy)

Thomas Chao, Phil Forsline’s successor at the USDA, explains that some of the M. sieversii flavours are quite tart. Too tangy for eating raw – but ideal for quality cider. “They need a unique flavour to make the cider really stand out and that’s where potentially some of this wild malus material could be used,” he explains. “We hope to start doing some more research in this area in the coming autumn.”

And there are also some young Kazakh entrepreneurs who have realised the potential of their local crops. The Aport apple is one of Kazakhstan’s most famous cultivated varieties – actually a cross of the M. sieversii and a Russian variety. It has a much-loved flavour and the fruit themselves can grow to a huge size – up to a kilogram in weight. However, after the fall of the Soviet Union, production dwindled.

There have been efforts to increase its presence in the local market in recent years, but now two local professionals have acquired a small orchard and have begun marketing their crop on social media.

After the collapse of the Soviet Union, most of the gardens were cut down to build villas – Timur Takabayev

“We sold everything that we picked from our garden,” says co-founder, Andrey Kim. “Now, we’re planning to expand.”

His business partner Timur Takabayev adds that Aport only tastes good when it is harvested late in the season at an altitude of between 800m and 1,200m. “If an Aport tree is planted anywhere else, it will harvest with some wild apples which are not edible,” Takabayev says.

“After the collapse of the Soviet Union, most of the gardens were cut down to build villas, as the land was considered the most luxurious at that altitude. Now there are very few gardens left, and ours is one of them.” 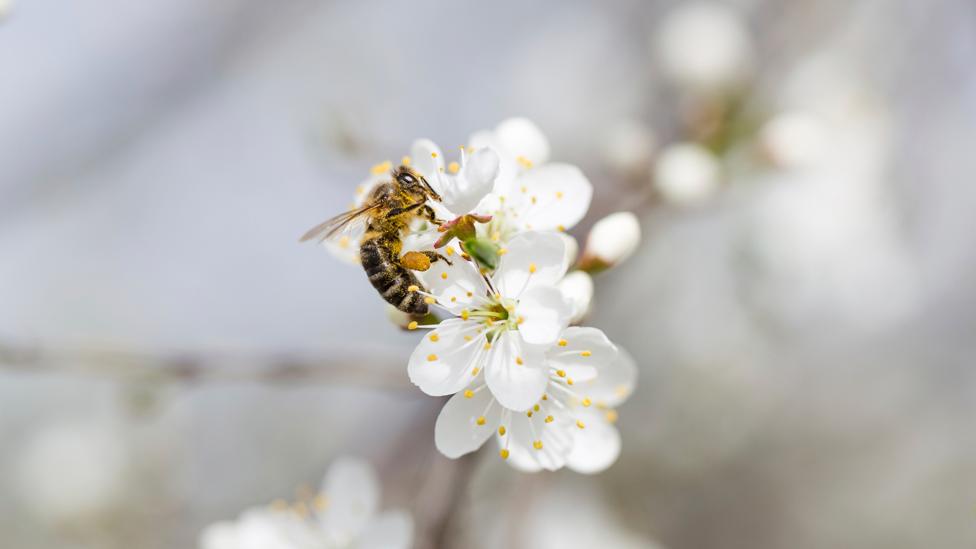 The trees flowers have to be "sealed" so insects like bees can't pollinate them (Credit: iStock)

Kim adds: “People [in Almaty] still remember and have kind of [nostalgic] feelings about the Aport apple.” He says he thinks the apple could become popular outside Kazakhstan too. Hence the duo’s current efforts to acquire export licenses so they can market their produce in the EU.

As with the lost Aport gardens, there are now worries that some of the wild ranges where apple trees grow are less well maintained than they were in the past. Forsline, for one, has heard reports about Kazakh sheep farmers using up the land for their livestock.

“They’re destroying a lot of the habitat so it’s a good thing we were there back in the 90s,” he says. “We feel that we mined the area pretty well, for getting a lot of the material out of there and it can now be used for all of humanity. That’s what a gene bank is for – you establish [it] for the long run.”

And who knows – out of that intrepid research, and now perhaps the efforts of local entrepreneurs, we may yet see a revolution in apple breeding thanks to the wonderful specimens of Kazakhstan.

Journey: Upgraded
1Why in-flight food tastes weird
The Genius Behind
2Will climate change make foods extinct?
Mosaic@Future
3Would you go on the insect diet?
Last Place on Earth
4The world’s most endangered food
Around the BBC