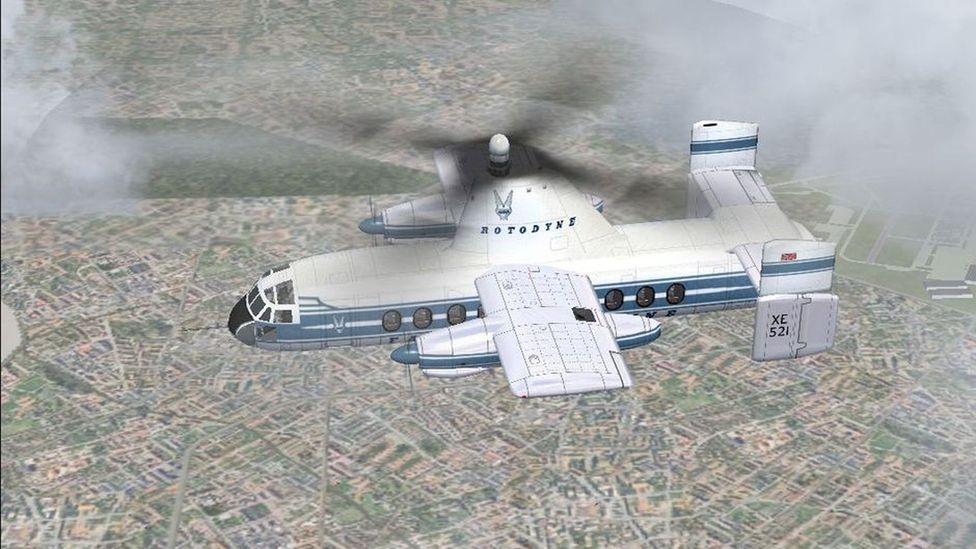 By Stephen Dowling 27th May 2016
Helicopter airliners could save us time and lessen the need for building expensive airports. So why don’t we have them?
A

Airports are expensive things to build. And they require vast amounts of space, enough for all the runways and hangars, terminals and luggage depots, parking and other services needed to keep us in the air.

They create an enormous amount of noise too – this was even more of an issue during the great civil aviation boom of the 1950s and 60s, when travelling by plane suddenly became within the reach of ordinary people.

Aircraft makers filled this need to fly with jet airliners that could take people to faraway climes safely and comfortably – but being quiet wasn’t one of the considerations. 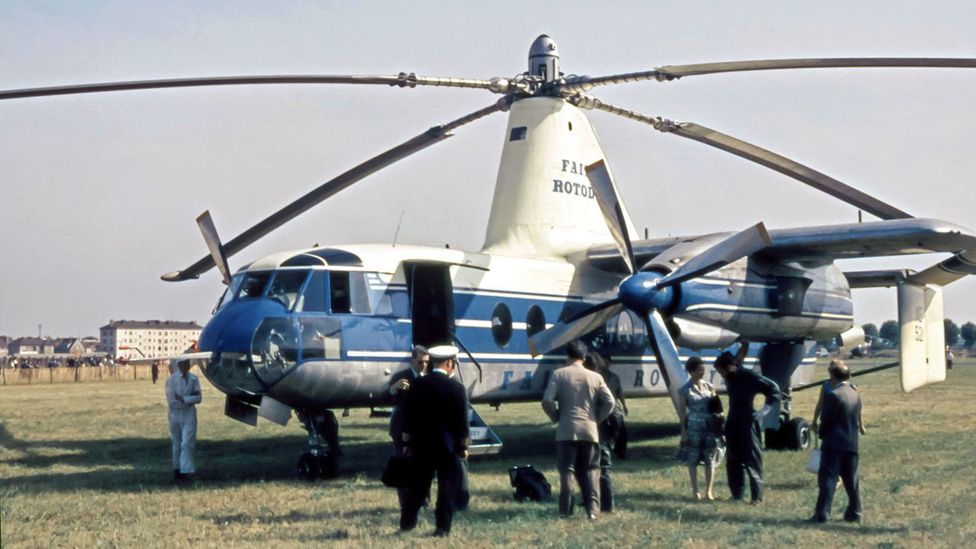 So why didn’t helicopters – which were much quieter than the earliest generation of jet airliners, and which can take off and land vertically on a fraction of the space needed for conventional aircraft – fly in to plug the gap?

It may seem like an ingenious solution – imagine taking a flight to the south of France from a heliport in the centre of the city. Unfortunately, creating something that marries the flexibility of a helicopter with the passenger capacity of an airliner has been a monumental struggle. Physics keeps getting in the way – but as technology improves we may find solutions to overcome the problems.

There was one aircraft that got closer than most – it even flew. The Fairey Rotodyne was a late 1950s attempt to design the helicopter airliner. It had a giant rotor on top of the fuselage, and a pair of short stubby wings, which each carried a jet engine that powered propellers and helped generate lift for the main rotor. The Rotodyne was intended to host as many as 40 passengers.

The Rotodyne was designed a few years after jet airliners had entered service. Already, the space needed for airports was becoming an issue. But, as the Royal Aeronautical Society’s Mike O’Donoghue says, there were serious technical issues its creators found impossible to overcome.

They envisioned an aircraft you could board near the centre of London that could whisk you to a heliport on the outskirts of Paris. But there was one major problem – colossal noise. 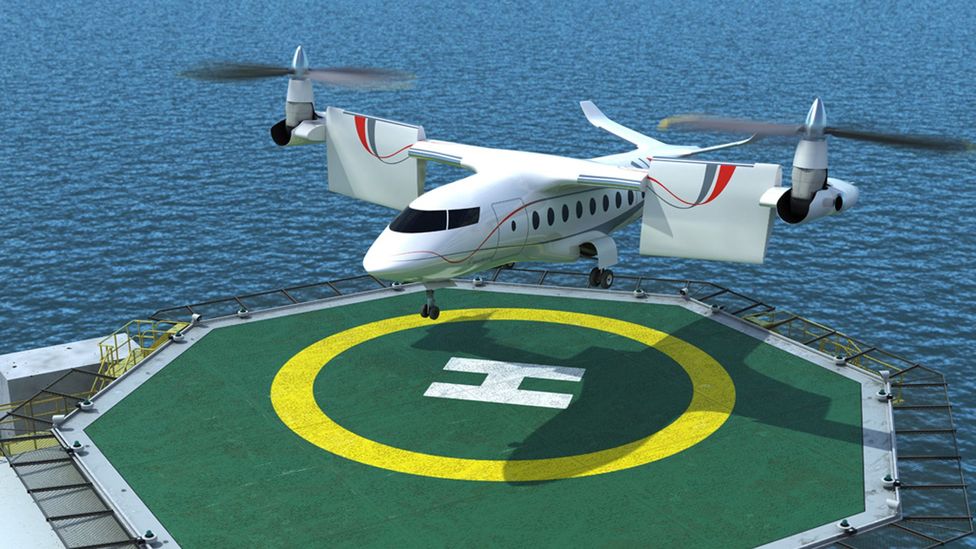 The Next Gen Civil Tilt Rotor would carry up to 20 passengers (Credit: Agusta-Westland)

“The noise was indescribable, I’m told. You could be two miles away from it and hardly carry on a conversation over the noise,” says O’Donoghue. “If you have a really noisy machine and you want to take it into the middle of the city, that’s not a very good plan – and this was in an age where people did as they were told a little more.”

The Rotodyne never got any orders and the project was scrapped. But the idea of an aircraft that is part-helicopter and part-airplane has never gone away.

As technology has improved, engines have become quieter and more efficient. The main emphasis has been on tiltrotor technology – in which an aircraft’s rotors or the wings on which they’re housed can be tilted forward or up. Tilted up, they allow the aircraft to take off or land vertically, tilted forward they help the aircraft fly faster through the air. As BBC Future has reported before, the physical limitation on how fast a helicopter can fly has been another big reason why it hasn’t taken over as a short-haul airliner.

The Aerotrain is a 737-sized tiltrotor, which they claim will give passengers more of an airliner-style experience – Dominic Perry, Flight International

The most famous example of this kind of technology is the Boeing V-22, a military aircraft currently in service with the US Marine Corp and Navy, and even the US presidential flight (though the president himself is not cleared to fly in one yet because of its safety record).

“That’s going to be a 20-person aircraft that should be able to cruise at more than 300mph, and is expected to have its first flight in 2021,” says Perry.

The project has been partly funded by the European Commission in a step toward the kind of aircraft the Rotodyne was envisaged to be. 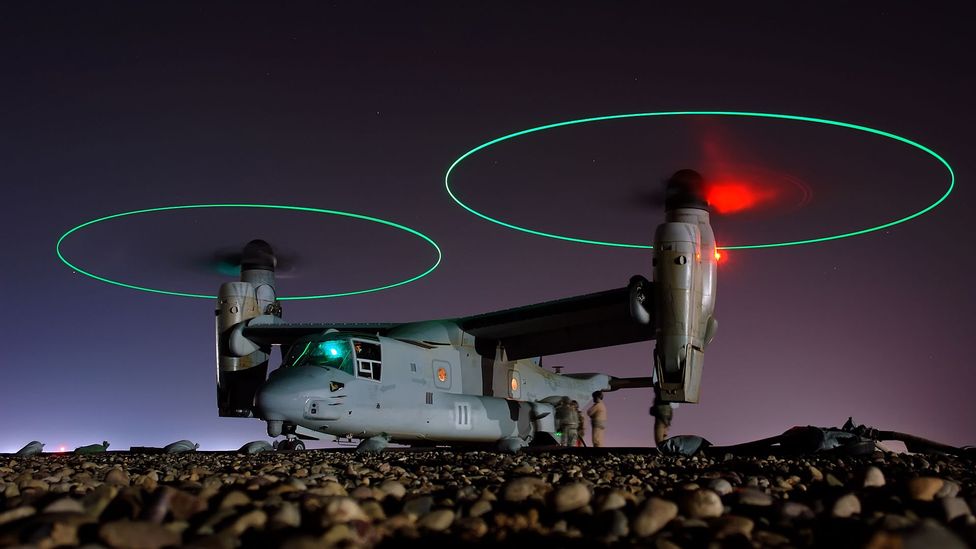 The V-22 Osprey can tilt its engines so they act like helicopter rotors for landing and take off (Credit: US Navy/Wikipedia)

Another design, says Perry, is the Karem Aerotrain. The Aerotrain’s fuselage looks very much like that of a conventional turboprop airliner you might see flying shorter routes, but its propellers tilt up or forward, just like the NGCTR.

“The Aerotrain is a 737-sized tiltrotor, which they claim will give passengers more of an airliner-style experience and capability, but will still be able to take off and land vertically.”

It’s a bold design, and one that may be too big to be feasible, but Perry adds that Karem has a good track record in creating aircraft that go against accepted practice – designer Abraham Karem is responsible for the jet-powered Predator drone widely used by the US military.

The Aerotrain was first unveiled in 2001 and has not yet flown; Perry says once the technology becomes advanced enough so that it can fly as efficiently as an airliner, it could become a viable alternative.

There’s one big issue with these tiltrotors. The propeller blades needed to keep the aircraft in the air are huge. “They’re whirring very close to the aircraft’s fuselage,” says Perry. “What happens when it loses a blade in the middle of a flight?” Passengers might not feel very comfortable with massive propeller blades chopping through the air only a few feet away.

What happens when it loses a blade in the middle of a flight?

O’Donoghue says that one of the big problems facing such designs is cost – the complications of tilting wings or rotors makes them much more expensive than a conventional aircraft of the same size. “The economics are so important,” he says. “I think whatever you come up with will only be able to take on the small-to-medium distance routes.” Trying to build a massive airliner that can carry hundreds of passengers and can still take off and land like a helicopter is too daunting a task.

That hasn’t stopped some designers from coming up with futuristic concepts for much bigger vertical take-off airliners – one of which is the hypothetical ‘Airbus A350H’ by Italian designer Victor Uribe. 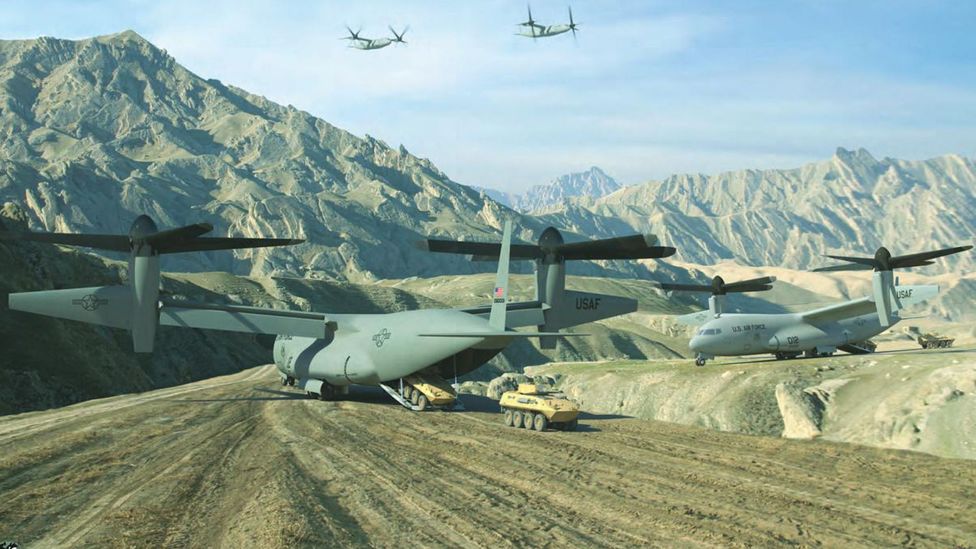 The Aerotrain has been mocked up as both an airliner and military transport (Credit: Karem Aircraft)

The spaceship-like Airbus concept does away with rotors and instead lifts off using engines that lie on the underneath of the airliner. Uribe’s shark-shaped, graceful design, has, according to O’Donoghue, “gone down the Gotham City route”. Unfortunately, we don’t yet have engines that could lift such a heavy aircraft into the air, at least not vertically.

Meanwhile, Boeing has been working with the US defence research agency Darpa on a propulsion system called the DiscRotor.

As you can see in the video above, the DiscRotor houses its blades inside a giant disc on top of the aircraft. The blades are extended and spin just as they would on a conventional helicopter for take-off. But as the aircraft picks up speed, the blades retract into the disc, and the disc stops spinning. The plane flies like a conventional aircraft again until it is time to land – as it slows, the blades are extended again so that it can land vertically.

Both are ambitious concepts. But it’s the kind of thinking that might be required if the vertical take-off airliner is to become reality.