The space agency is taking cues from the heyday of experimental flight in the 20th Century, by building a new generation of boundary-busting aircraft.

Cruising along in a passenger plane, it’s easy to assume that aircraft have always looked this way. That is, until you learn about Nasa’s ‘X-planes’ – a series of experimental aircraft launched in the 1940s. Many were so hi-tech, they make you wonder why modern aeroplanes aren’t more exotic. Planes without wings. Planes without tails. Planes without pilots. Planes which turn 180 degrees in the sky. Jet propulsion. For the most ambitious aeronautical program ever, it seemed nothing was off the table.

Now the X-planes are back: Nasa has unveiled a new 10-year experimental programme, aimed at developing aircraft which are quieter, greener, and much, much faster. Among their plans is a supersonic jet so tranquil, its supersonic boom has been likened to the sound of a neighbour forcefully shutting their car door (pictured, above). But that’s just the beginning.

You might wonder what any of this has to do with Nasa’s remit in space exploration. In fact, Nasa was borne out of Naca, the National Advisory Committee for Aeronautics, which was founded in the early 20th Century.

The X-programme started after World War Two, when Naca joined up with the US Air Force to break the sound barrier. Together they created the Bell X-1 and in 1947, after an air launch high above the empty Southern California desert, pilot Chuck Yeager became the first human to reach Mach One. 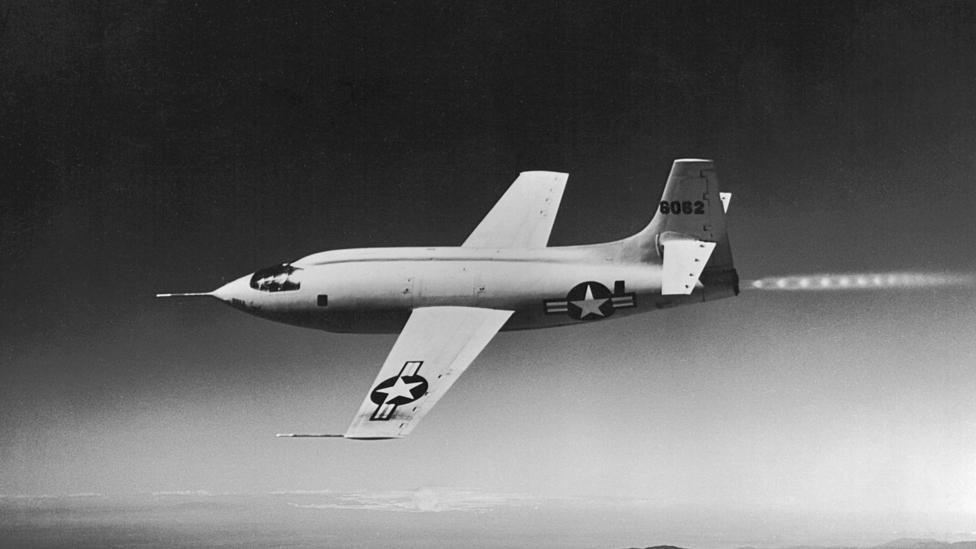 In the Bell X-1, Chuck Yeager became the first pilot to reach Mach 1

Over the next 60 years the X-program went on to create some of the most exciting planes ever made, breaking countless records on speed, altitude and design and paving the way for the next generation of air travel.

One of the most radical was the X-13. The ‘Vertijet’, as it was known, could take off vertically, hover, fly like a regular plane, and then drop vertically onto a landing platform. To achieve these feats without stalling or losing control, the plane was equipped with ‘vectored thrust’ – turbojet engines which could be adjusted to power the plane in any direction. It also had "puffer" jets on the wingtips to allow the plane to roll.

Then there was the X-31A, a super-agile military craft which could turn 180 degrees in mid-air.  Where other planes would spin out of control while turning a sharp corner, the X-31 was capable of acrobatics which would impress most birds.

It’s the fastest plane on Earth, able to travel over nine times the speed of sound by riding its own shockwave

That’s not to mention the air-breathing X-43A scramjet, which reaches rocket-like speeds and doesn’t need to carry its own oxygen to ignite its fuel supply. Instead the X-43 saves in weight by sucking it out of the atmosphere as it flies. It’s the fastest plane on Earth, able to travel over nine times the speed of sound (7,310 mph) by riding its own shockwave. The next model, the unmanned X-51A, currently holds the holds the record for the longest hypersonic flight. 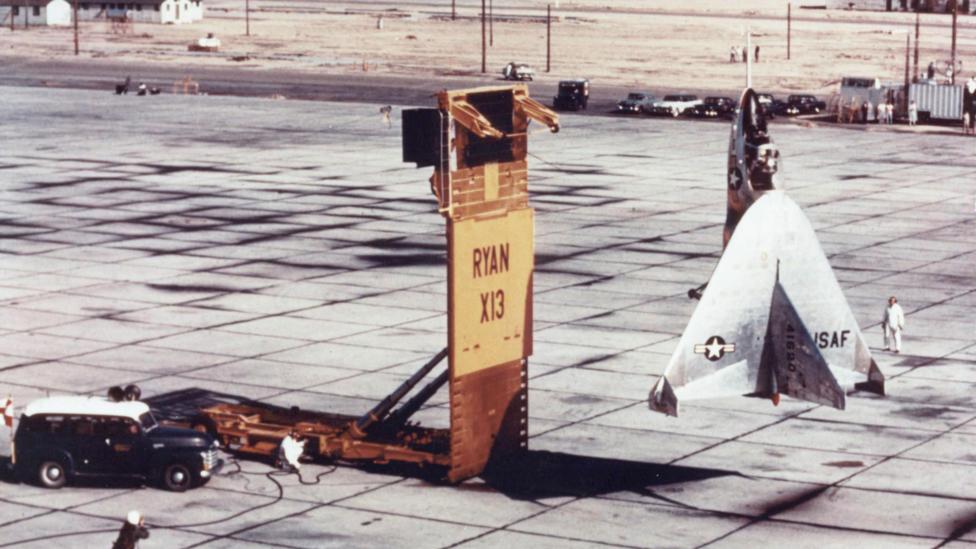 The ‘Vertijet’ could take off vertically, hover, and fly like a regular plane (Credit: Nasa)

For the new programme, Nasa has set its sights on bringing these thunderous speeds to the masses with a business-jet sized supersonic plane. There’s just one problem: as anyone who’s found themselves in the flight path of a Concorde will attest, supersonic planes are deafeningly noisy. That’s fine if you’re mostly flying over the Atlantic, but if you’re flying on land you’re going to get a lot of complaints. In the 50s and 60s, Americans filed some 40,000 claims against the Air Force after a series of supersonic test flights. Over a single three-month period in 1967, the disputes amounted to $3,800,000.

For the new Quiet Supersonic Technology (QueSST) project, Nasa aims to take the boom out of hypersonic travel. But how?

By playing around with the shape of the aircraft, it might be possible to engineer a shockwave which isn’t so loud

To understand how the technology will work, we first need to get to grips with what makes them so loud in the first place. As conventional planes travel through the air they create pressure waves, much like the concentric ripples around the stern of a boat in water. The waves travel at the speed of sound, and as the speed of the plane increases, they are forced together because they cannot get away from each other in time. Eventually they merge into a single shockwave which starts at the nose of the aircraft and ends at the tail.

The ‘boom’ is experienced whenever there is a change in pressure, so in fact a single plane causes two claps of thunder – when the nose hits, and when the pressure suddenly returns to normal as the tail passes by.

Recent research from wind tunnels has shown that by playing around with the shape of the aircraft, it might be possible to engineer a shockwave which isn’t quite so hard on the ears. Nasa hasn’t released any details yet, but initial designs involve replacing the bird-like design of current aircraft (body and wings) with wings which blend into the body (think of a stingray and you get the picture). 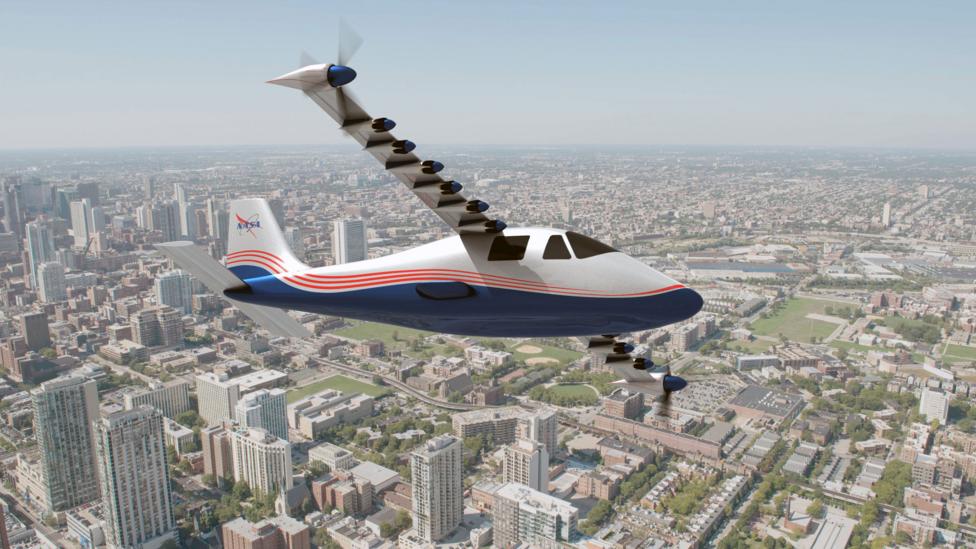 The electric X-57 has been named ‘Maxwell’ after James Clerk Maxwell (Credit: Nasa)

And that’s not all. Nasa hopes the new X-jets will slash the carbon footprint of air travel, cutting fuel consumption in half and reducing emissions by 75%. The X-57, which was revealed this month, will be one of the world’s first purely electric aircraft, running on 14 battery-powered motors which could be charged using renewable energy. It has been named ‘Maxwell’ after James Clerk Maxwell, widely acclaimed as the father of modern physics. Even the new supersonic jet will burn just low-carbon biofuels.

For Nasa, the new research programme is an opportunity to push the frontiers of aviation. For aeronautical enthusiasts, it’s a revival of a centuries-old tradition which has captured imaginations for decades. For the rest of us – well the possibility of a guilt-free day trip from London to New York just got a little bit more realistic. 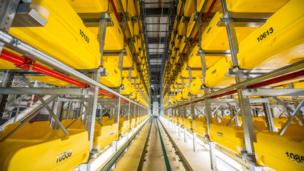 The hidden world of airport luggage 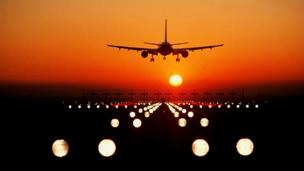 The hidden radio you never hear 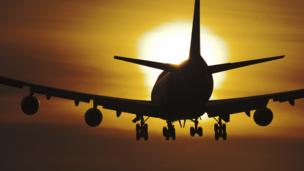 The Heathrow you never see