Over the last 150 years, oil booms and busts have given rise – and laid waste – to hundreds of towns across the world.

In many places on our planet, striking oil has meant the eruption of new settlements in previously uninhabited places. Where there has been oil, there have usually been people.

But they haven’t always hung around. The world is littered with ghost towns that were once home to newly minted oil barons and workers who dreamt of turning goo into gold.

This is not just history. With the price of crude oil less than half what it was three years ago, many more towns – particularly some American ones – are now being abandoned as the profits evaporate.

“People move in and move out,” comments historian William Caraher at the University of North Dakota, “and there are scars left behind of various types.”

These pictures reveal just a few of the places built – and later deserted – thanks to oil. 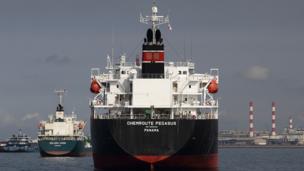 Why are oil ships waiting offshore?

Why are oil ships waiting offshore?