Sometimes our food lies to us. Is it really safe to eat? Is it even what’s listed on the packet? A lab in Belfast is one of best places in the world to find out.

In a university laboratory in Belfast, a student named Terry is holding an infrared sensor over a tiny dish of powdered oregano. At least, it was labelled ‘dried oregano’ for the food market. But is it?

As the sensor’s light hits the material, a software programme performs an analysis. This time the substance is a good match. It quite often isn’t. In some batches, up to 40% of the ‘dried oregano’ came from leaves of another plant, such as myrtle or olive trees. 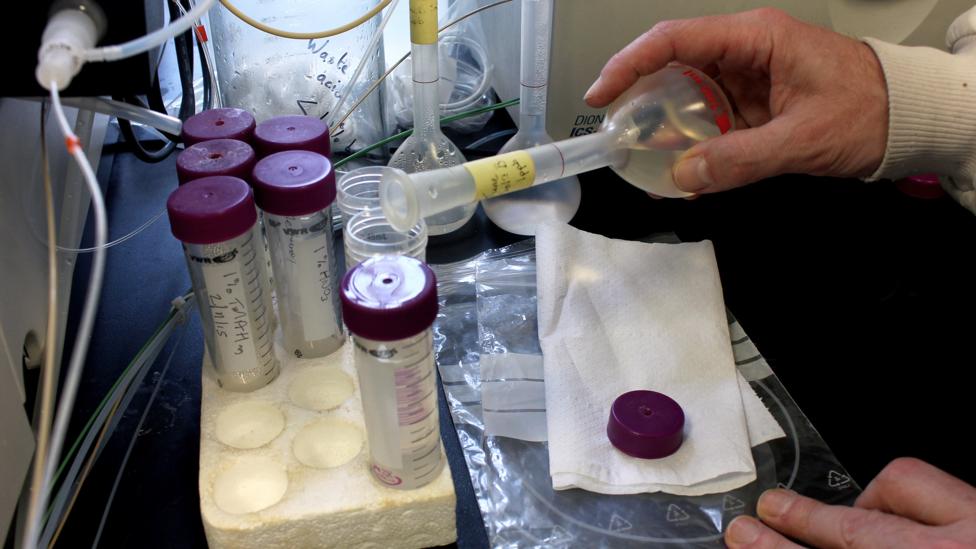 A lab technician measures one of the food samples for testing (Credit: Chris Baraniuk)

The problem is not just that people are getting ripped off by having cheap dried leaves added to their packet of herbs. It’s also that, often, those cheaper leaves weren’t properly washed and prepared for human consumption.

Even in your 20% adulterated oregano, you were getting a very nice dose of pesticide – Chris Elliott

“When we went and did the pesticide checks, they were absolutely hooching with pesticide,” says Chris Elliott, director of the Institute for Global Food Security at Queen’s University, where the lab is based. “So even in your 20% adulterated oregano, you were getting a very nice dose of pesticide at the same time.”

Today, the value of the global retail food market is $4tn (£3tn) – and rapidly growing. Some predictions hold that by 2020, it will reach more than $8tn (£6tn). As a result, supply chains are getting more and more complex – and more at risk of a type of criminal fraud in which cheap, often nasty substances are mixed in at some step of the process. The adulterators siphon off billions from the legitimate market. And in doing so, they put people’s health at risk.

Having grown up on a farm in Northern Ireland’s County Antrim, Elliott has a sound understanding of how to produce quality food. Indeed, he’s long been an expert in the field but was only thrust into the spotlight in 2013, when some processed beef products in the UK – from pre-made burgers to frozen lasagne – were found to contain high percentages of horsemeat. A few products were entirely horsemeat.

The scandal rocked the British retail food industry. Elliott was commissioned by the government to produce a report. Three years later, he says he’s confident there’s no horsemeat lurking in products on supermarket shelves.

But while working on his report, Elliott became convinced that the people behind the horsemeat scandal were organised criminals – hiding their activities in markets across Europe and scamming millions from innocent customers who ate their fraudulent products.

At Elliott’s lab, this adulteration and contamination continues to be found in a wide range of food products – not just minced beef.

In the main testing room, there are measuring instruments and little containers everywhere. Some of them are stored in pizza boxes for convenience. One machine vaporises samples at temperatures of 10,000 Kelvin (approximately 9,700C (17,500F)). Another, the size of an upright piano, costs £750,000 ($985,000). It can perform hundreds of different tests at once. “Don’t break it!” jokes Elliott as he passes a student at work. “I won’t,” comes the slightly nervous reply. 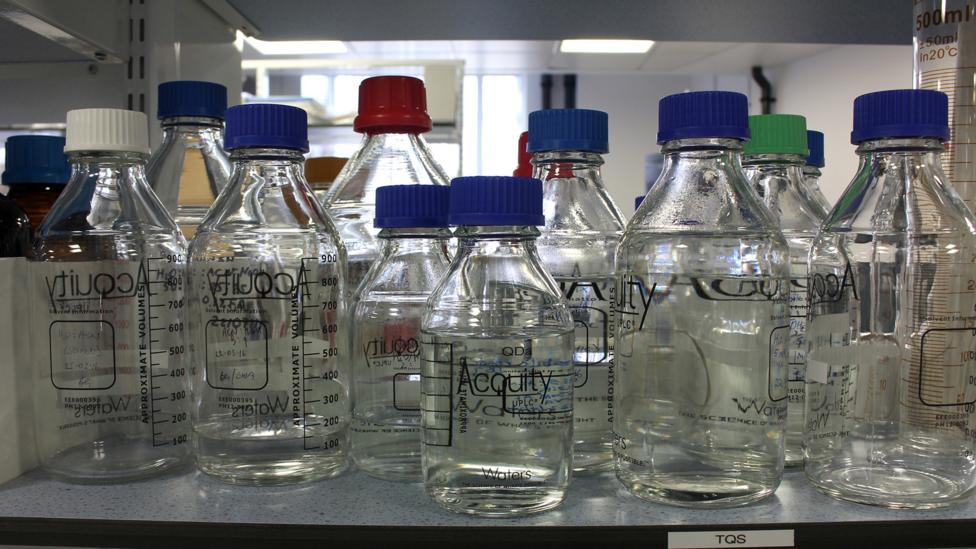 The testing room is filled not only with expensive equipment, but measuring instruments and small containers (Credit: Chris Baraniuk)

To test the oregano, it all comes down to a type of chemical analysis called spectroscopy.

“It’s quite simple. We shine light on the foodstuff and then the energy from the light causes the food molecules to vibrate or wobble and we get what I sometimes call a wobble pattern,” says Elliott. “Every molecule will vibrate in a slightly different way, so you measure all of those vibrations together and you get your fingerprint. It’s remarkably consistent.”

The more tests they do, the better the model that recognises the different wobble patterns becomes. The handheld approach that the student Terry is using is their latest innovation. The team hopes that it will one day be available to food inspectors, perhaps as a wirelessly connected device – enabling an inspector to walk into any producer or supplier and instantly check to see if a foodstuff is what it is claimed to be.

One method includes using biosensors with antibodies. If bonding occurs for one of these antibodies, then the tester knows that a particular contaminant is present

Other tests can then determine if toxins are present in an adulterated foodstuff. One method includes using biosensors which employ antibodies – the proteins in animal immune systems that bond with specific pathogens or toxins to neutralise them. If bonding occurs for one of these antibodies, then the tester knows that a particular contaminant is present.

Nearly any kind of food may be laced with harmful chemicals. Industrial dyes are sometimes added to spices, for example, to give them a deeper colour. And since the price of milk is set by how much protein it contains, fraudsters will add another source of protein to their watered-down product – like rice protein or even hydrolysed leather, which comes from the skins of animals. The price of milk is set by how much protein it contains, which means fraudsters may water it down – then add a protein like hydrolysed leather hide (Credit: Alamy)

Even more dangerous substances might be added. Countries prone to hot weather, where the inside of a transport lorry might reach 40C, can be especially vulnerable, says Elliott.

Even if a toxin isn’t deliberately mixed in to a product, the food might still contain it – including in concentrations that should take the product off the market, but may not. Depending on where and how rice is grown, for example, it may contain high levels of arsenic, a heavy metal that can increase the risk of cancer.

One of the preservatives they like to add is formaldehyde. Formaldehyde is a deadly poison – Elliott

One lab technique used to detect heavy metals like this, and others such as lead or cadmium, is X-ray fluorescence imaging. When X-rays strike the sample, they cause electrons to separate from atoms. When this happens, photons with energies specific to the type of atom are also released. By measuring that energy, technicians can tell which elements are present.

The lab isn’t just concerned with identifying dangerous elements and compounds in food products. As with horsemeat, sometimes the food listed on a packet differs entirely from what is actually inside.

One of the most frequently mislabelled foodstuffs is white filleted fish. Most people can’t tell the difference between fillets of haddock, cod, pollock or whiting – even after a bite. But each fish is quite different in terms of price. Selling a cheaper fillet but marketing it as a more expensive one has sometimes tempted fish and chip shop owners as well as suppliers. 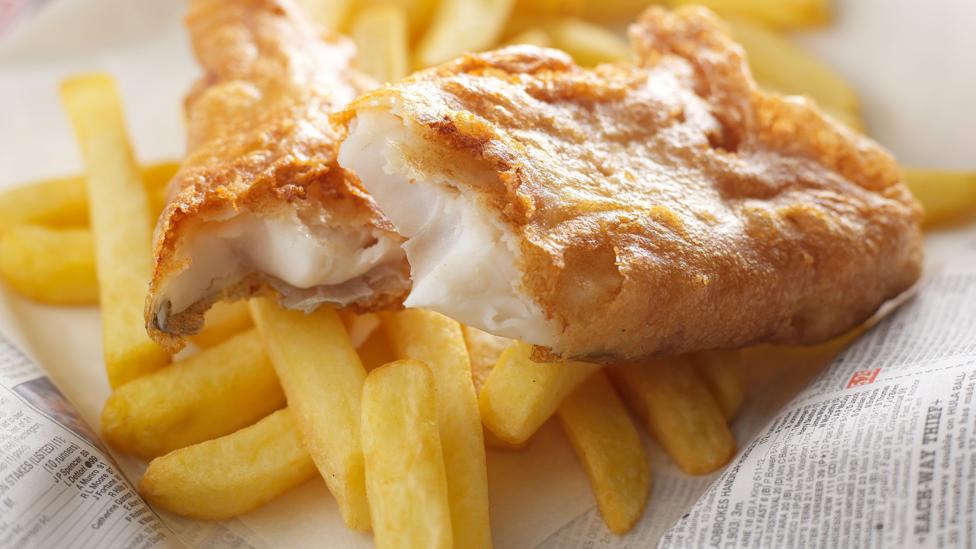 Would you be able to tell if this is haddock, cod, pollock or whiting? Most people can’t (Credit: Alamy)

Elliott, though, has a new gadget up his sleeve that is helping to catch them out. Called the “i-knife” or “intelligent knife”, it was originally developed by Zoltan Takats, a world-class surgeon at Imperial College, London. Takats wanted a surgical instrument that would tell him when he was cutting through cancerous tissue or healthy tissue: the more precise one can be when extracting a tumour, the lower the likelihood of a repeat surgery (or of removing healthy tissue).

The knife Takats developed is mounted with a laser, which vaporises molecules. The resulting smoke is sucked into a mass spectrometer for analysis. Electrons are fired at the smoke to disintegrate the molecules, allowing the machine to sort the atoms based on their charge, which is specific to each type. 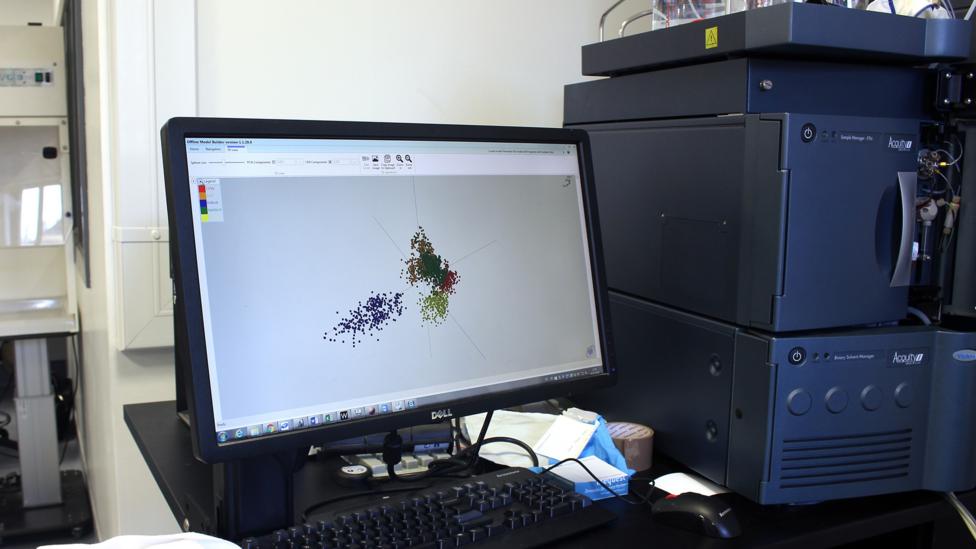 By plotting the results of the smoke analyses, the team was able to differentiate species of fish (Credit: Chris Baraniuk)

By cutting through pieces of haddock, then of cod, whiting and so on, Elliott’s team were able to plot the resulting smoke analysis of each – which differed based on the species. Suddenly it was possible to tell which was which in minutes, just by slicing through it gently.

Elliott isn’t stopping there. He’s also working on a way to tell whether a fish was caught from a pole and line or in a net. Because catching fish with nets contributes to overfishing, to entangling other animals like dolphins and sea turtles, and even to damaging coral reefs and seafloor habitats in the case of bottom trawling, ethically-minded consumers often pay a premium to eat only line-caught specimens. But how can one tell which is which by the time the fish ends up in a shop?

“We are finding different metabolic markers in those fish,” says Elliot. “Our hypothesis is they’re based around stress.”

Since one method of catching causes more stress to the fish than the other, it might be possible to build a reliable model to differentiate. That, certainly, is the plan.

The techniques developed by Elliott and his team provide a window into what actually goes on in our global, multifaceted food supply chain. 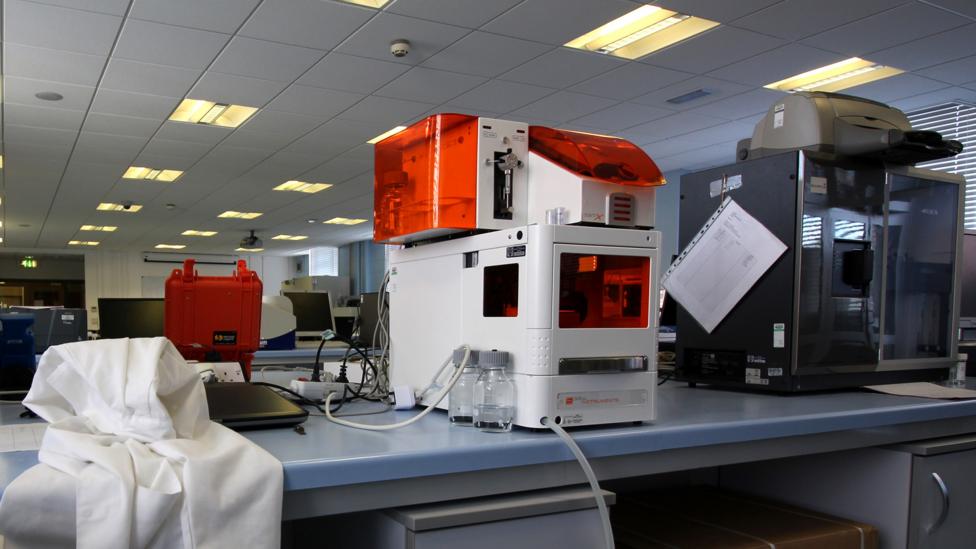 The lab’s testing equipment, like the machines shown here, show what can lurk inside our global food supply chain (Credit: Chris Baraniuk)

“We need this very complex supply system,” says Elliott. “But one of the downsides to that is that more and more actors are involved in this supply system and every time you have another person involved you introduce another vulnerability.”

We need this very complex supply system, but one of the downsides is that every time you have another person involved you introduce another vulnerability – Elliott

“It’s all about the money,” says Chris Van Steenkiste, an investigator who specialises in counterfeit goods at Europol. He’s found all kinds of fraud – from edible snails collected haphazardly from the woods instead of produced in safe conditions on a farm, to out-of-date squid washed with chemicals and sold on ice as though it were fresh.

“We’re still working on some cases that I can’t tell you a lot about, which are clearly linked to organised crime or the mafia,” he adds.

Elliott says he doesn’t think it’s possible to eradicate food fraud. But he does think countries which take a tough stance can hamper the criminals’ efforts.

“Are you going to stop people doing it?” he asks. “No. What you’ve got to do is make it more difficult.”

If you liked this story, sign up for the weekly bbc.com features newsletter called "If You Only Read 6 Things This Week". A handpicked selection of stories from BBC Future, Earth, Culture, Capital, Travel and Autos, delivered to your inbox every Friday. 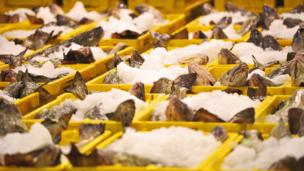 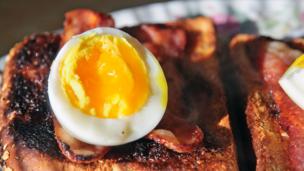 Are any foods safe to eat anymore? 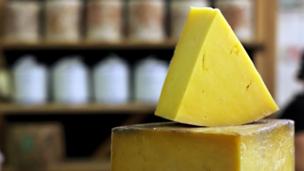 The strange world inside cheese