Rachel’s rare condition means that a bath is agony; even her own tears will scorch her face. How can the human body reject life’s most basic necessity?

Rachel wakes up – and drinks a kind of poison that feels like a glass of stinging nettles. As it slips downs her throat, she can feel it blistering her skin, leaving a trail of red, itchy welts behind. Later that day, scorching drops of the stuff start falling from the sky. At the local leisure centre, she watches others splash around in a pool of the irritant. They seem unfazed, but the moment she dips her toe in, she’s faced with burning pain.

No, this is not some bizarre alternate reality. This is the world of Rachel Warwick, who is allergic to water. It’s a world where relaxing baths are the stuff of nightmares and snorkelling in tropical seas is as appealing as rubbing yourself with bleach. “Those things are my idea of hell,” she says.

Any contact with water whatsoever – even her own sweat – leaves Rachel with a painful, swollen and intensely itchy rash which can last for several hours. “The reaction makes me feel as if I’ve run a marathon. I feel really tired afterwards so I have to go and sit down for quite a while,” she says. “It’s horrible, but if I cry my face swells up”.

Otherwise known as aquagenic urticaria, the condition is like being stung by a bush of particularly pernicious nettles, combined with the malaise of hay fever, every single day.

It’s certainly unpleasant, but at this point you’re probably wondering how Rachel is able to survive at all. We’re reminded on almost a daily basis that water is life’s most basic necessity – so much so that NASA’s motto on the hunt for alien life is simply “follow the water”. At least 60% of the human body is water; the average 70 kg adult contains around 40 litres.

So let’s get a few things straight. For a start, the water in our bodies is apparently not a problem. The reaction is triggered by skin contact and occurs regardless of temperature, purity or salt content. Even bona fide, chemical-free, many-times distilled water will set it off.

“When I meet people there’s always a lot of confusion and all the usual questions – ‘how do you eat?’ ‘How do you drink?’ ‘How do you wash?’ The truth is you just have to suck it up and get on with it,” says Rachel. 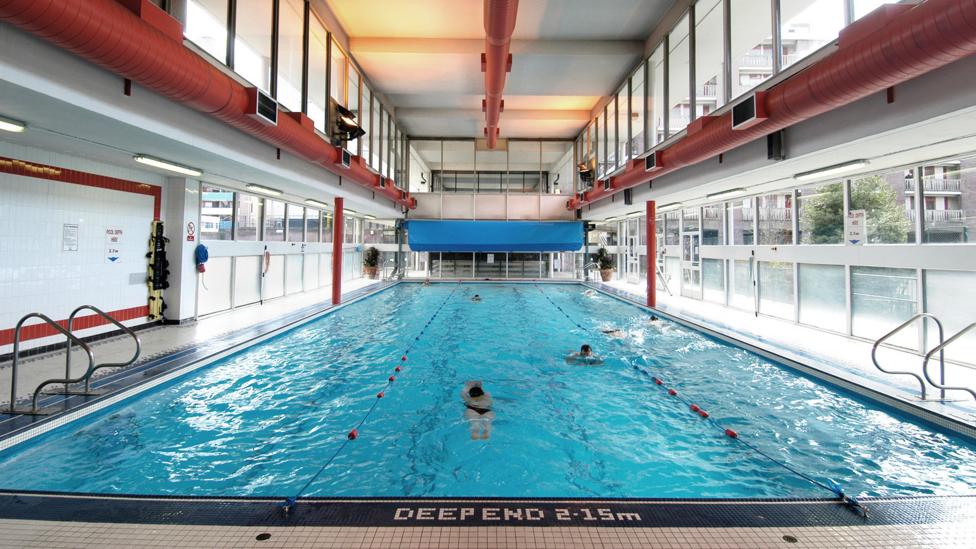 For Rachel, diving into this pool would be like swimming in potent bleach (Credit: Alamy)

Right from the beginning, aquagenic urticaria was as baffling to scientists as it is to the rest of us. Technically, the condition isn’t actually an allergy at all, since it’s likely caused by an immune reaction to something within the body, rather than an over-reaction to something foreign, such as pollen or peanuts.

The earliest theory to explain how it works is that water is interacting with the outermost layer of skin, which consists mostly of dead skin cells, or the oily substance which keeps skin moist. Contact with water may cause these components to release toxic compounds, which in turn leads to an immune reaction.

Others have suggested that water may simply dissolve chemicals in the layer of dead skin, allowing them to penetrate deeper where they can cause an immune reaction.

Indeed, treating the skin with chemical solvents – which allow more water into this layer – before exposure makes the reaction worse. But when the upper layer of skin is removed completely, the reaction goes ahead as normal.

Perhaps the most left-field idea is that it’s caused by pressure changes, which accidentally set off the immune alarm as water leaves the skin by osmosis.

Whatever the causes, according to Marcus Maurer, a dermatologist who founded the European Centre for Allergy Foundation (ECARF) in Germany, this is a devastating illness which can transform lives. “I have patients who have had urticaria for 40 years and they still wake up with wheals and oedema [swelling] every day,” he says.

Sufferers may be depressed or anxious, always worrying about when their next attack will strike. “In terms of quality of life impairment it’s one of the worst skin diseases you can have,” he says.

Rachel was around 12 years old when she was diagnosed, after noticing a rash after swimming. “My doctor heard what I had to say, and he was like ‘I think you have this’. I was really fortunate that he knew about it,” she says.

In the winter rain, Rachel can’t leave the house

She wasn’t sent for testing. The standard method for diagnosis is to keep the upper body wet for half an hour and see what happens. “He basically told me that what they’d put me through would be worse than the disease,” she says.

And while surviving with the condition is not a problem, enduring everyday life is another matter. In the winter when it rains a lot, for example, Rachel can’t leave the house.

For everyday activities such as washing up, Rachel’s husband – who is also her official carer – steps in. To wash, she limits herself to showering once a week. To minimise sweating, she wears light clothing and avoids exercise. Like others with the condition, Rachel drinks a lot of milk, since the reaction isn’t as bad as with water. Again, no one knows why this is. 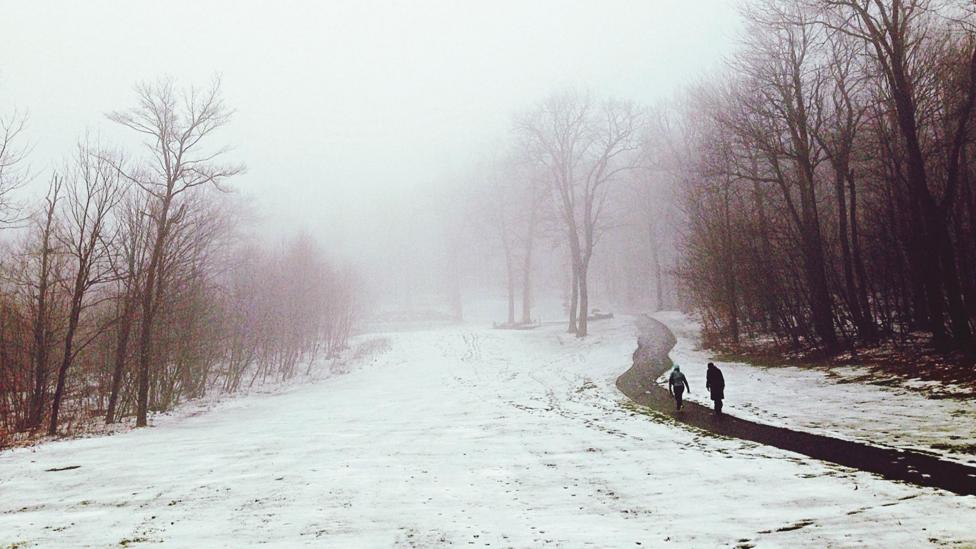 People with an allergy can't even tolerate rain or snow on their skin (Credit: Alamy)

For such a mysterious illness, the hunt for a cure has been suitably bewildering. At the moment, the standard treatment is to take powerful anti-histamines. To understand why, first we need to get to grips with what goes down during a reaction.

It all kicks off when immune cells in the skin, known as mast cells, release inflammatory histamine proteins. During a normal immune reaction, histamines are extremely helpful – making blood vessels leaky enough to allow white blood cells through to attack any intruders. During a reaction to water, all you get are the side-effects: fluid seeps out through their walls, causing the surrounding skin to swell up.

At the same time, histamine activates “itch neurons”, whose only role is to make us want to itch. The result is a patch of raised, itchy areas of skin known as welts.

In theory, anti-histamines should work every time. In practice, the drugs have decidedly mixed results.

Back in 2014, Rachel was sent to the ECARF in Berlin as part of a documentary, where doctors suggested she try a high dose. She did as they said – then put them to the test at her local swimming pool. It didn’t work. “Afterwards I was itching like crazy and I looked like I was diseased,” she says.

For years, anti-histamines were the only option. Then in 2008 Maurer and colleagues from the ECARF had an idea. “We didn’t evolve mast cells so that we could suffer from urticaria. So what gets them to do bad things?” he says.

The histamine-releasing cells of people with the condition look entirely normal, and they don’t have any more than the rest of us. So something else must be telling them to act up. From studies in the lab, the scientists thought the culprit might be IgE, the antibody responsible for true allergies, such as those to pollen or cats.

“Instead of reacting to something from the outside world, they’re producing IgE in response to something within themselves,” says Maurer.

All they needed was a drug which could block IgE’s effects. And as luck would have it, there was already a drug on the market which could do just that.

Omalizumab was originally developed as a treatment for asthma. “When we said ‘we’d like to use this anti-allergic drug in these patients’ the drug company said ‘why would you want to do that? It’s not an allergy, how can that work,’” says Maurer.

After convincing the sceptics, in August 2009 they put the idea to the test. Their patient was a 48-year old woman with another rare form of urticaria, which is triggered by pressure. For three years, the patient had been breaking out into a raised, itchy rash at slightest touch. It was so bad, it would happen when she combed her hair or dressed.

After just a week of treatment, the woman’s symptoms were visibly diminished. By the end of the month, they had completely disappeared.

Since then scientists have discovered omalizumab is effective against even the most obscure forms of urticaria – from reactions to sunlight to changes in temperature, to friction. “It’s amazing; I mean this drug is a complete game-changer,” says Maurer. 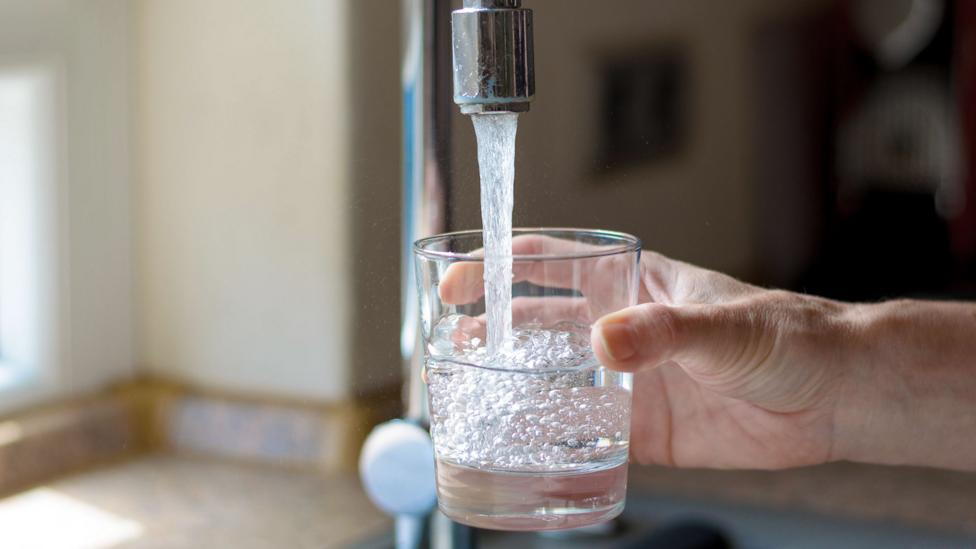 One of Maurer’s first patients was a young professor who was reacting to his own sweat. He couldn’t run for the bus without breaking out into a painful rash and, most importantly, could not give a lecture to his students because the slightest dampness on his brow was completely disfiguring. “He was basically ready to give up his academic career,” says Maurer. After just a week on omalizumab, he was a completely different person.

It’s safe, it’s effective – it even works for aquagenic urticaria. This should be a happy ending. But there’s a catch. The asthma drug is currently being used “off-label”; that is, the effectiveness of the drug against urticaria hasn’t yet been demonstrated in a large-scale clinical trial. And most healthcare providers, from insurance companies to the UK’s NHS, simply won’t pay for drugs without one.

This is the problem Rachel encountered back in 2014, when the specialist in Berlin recommended omalizumab. At the moment, the drug would set her back around a thousand euros per month.

But finding enough patients for a trial could be problematic. Aquagenic urticaria affects around one in every 230 million people. By that estimate, there are only 32 people with the condition on the entire planet. “We are a big team here, we see more than 2,000 new urticaria patients every year. And we have three with aquagenic urticaria,” says Maurer.

To complicate matters further, the drug is coming to the end of its patent. With so little time left to make any money out of it – and a handful of potential customers – convincing the company to invest in a trial would be extremely difficult. “I’m not sure that we will see such a trial,” he says. Novartis, who market the drug as Xolair for asthma and other conditions, confirm they have no plans to develop the treatment for aquagenic urticaria. "We believe that the unlicensed use of drugs should be limited to cases where there is an unmet medical need that cannot be fulfilled by licensed medications or as permitted by the regulatory framework designed to protect patient safety," their spokesperson adds. After decades of research to solve the mystery disease, the final hurdle isn’t science, but economics.

So what would Rachel do first if she found an effective treatment? That’s easy. “I’d like to be able to go to swimming at the leisure centre. And go dancing in the rain,” she says.