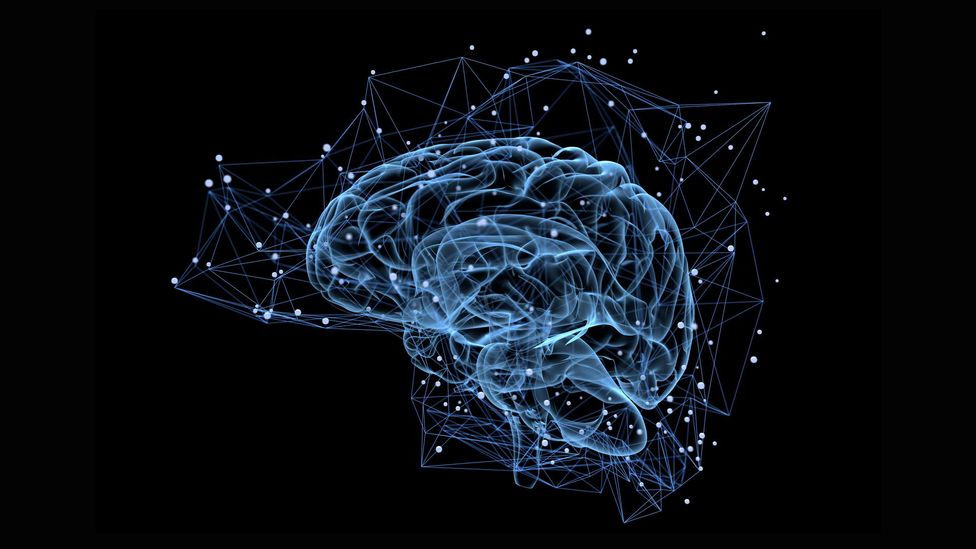 By Zaria Gorvett 5th October 2016
Madeleine Lancaster has 300 brains growing in her lab – here’s how she’s done it.

As she speaks, Madeleine Lancaster rests her hand on her pregnant belly. “Oh they’re about six or seven months along now”. At this point her progeny measure about four millimetres across. She’s growing a few hundred, and each has around two million neurons already.

Fortunately, she’s not talking about an enormous brood of unborn babies – though she is expecting one normal human. No, this scientist is referring to a batch of developing human brains.

We’re in the MRC’s brand new molecular biology lab in Cambridge – a sprawling warren of glass-fronted laboratories, space-age equipment and hallways which seem to stretch for miles. It’s not secret or underground, but the £212m building is home to a number of futuristic projects worthy of their own Hollywood movie. 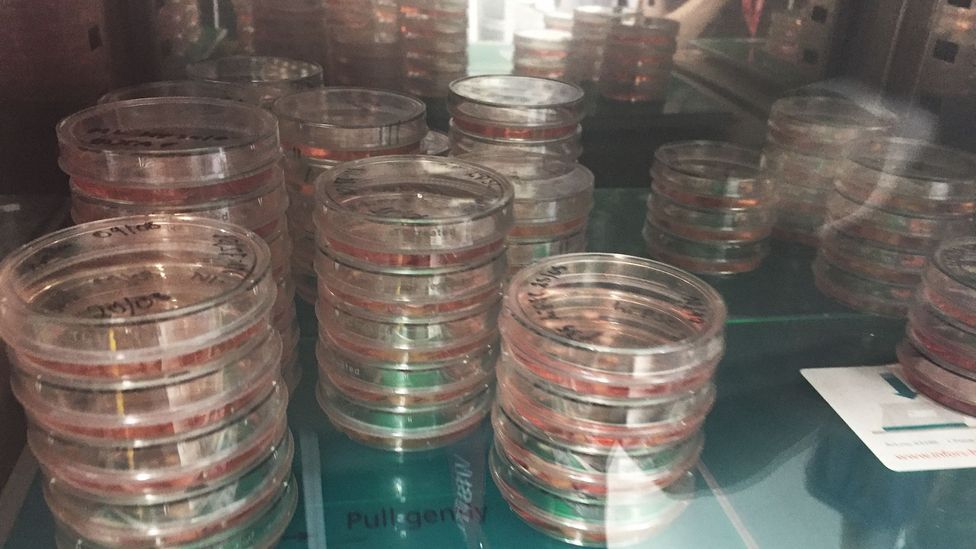 In her own small corner of this research utopia, Madeleine’s team is at work on a task so absurd it seems more wizardly than scientific: they’re transforming human skin into brains.

“The brains develop in the same way you would see in an embryo,” says Madeleine. This may be true, but their surroundings are rather different. In place of a womb, the disembodied brains are raised in giant incubators. Without a blood supply they are fed with a nutrient-rich fluid which is refreshed every few days. And, of course, they don’t have an immune system: everything – everything – which comes into contact with them must be disinfected first with alcohol.

Just like regular brains, each is composed of specific regions

When she opens the incubator door – well, I have to admit they don’t look as impressive as I’d imagined: insipid, watery blobs floating in a pool of pale pink liquid. They look more like bits of waterlogged popcorn than powerhouses of intellectual ability.

But their looks are deceiving. In fact these “cerebral organoids”, as they have been christened, are strikingly similar to the brains of ordinary people. Just like any other brain, the organoids are divided into grey matter – which is made of neurons – and white matter, a fatty tissue composed of their spindly ‘tails’. 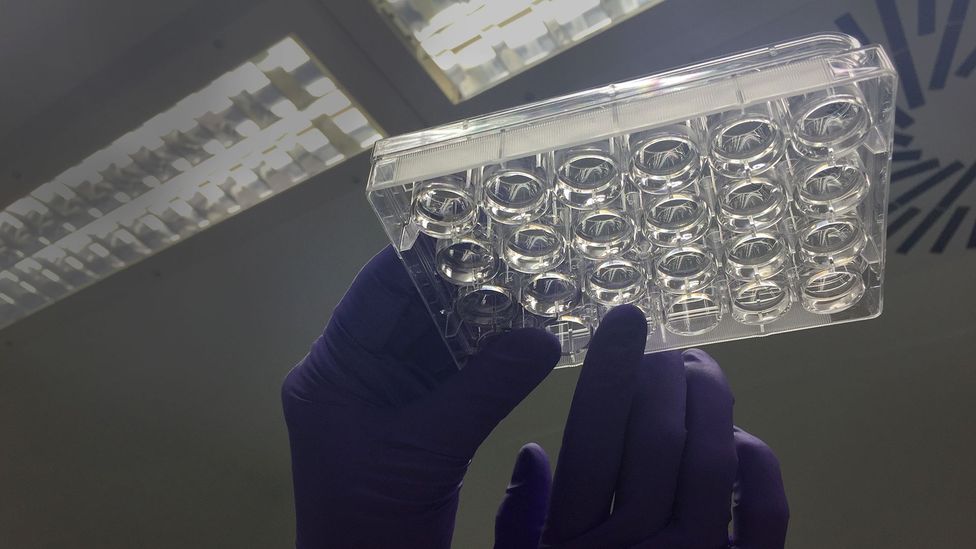 The brains buzz with activity as the neurons fire information to each other (Credit: Zaria Gorvett)

And just like regular brains, each is composed of specific regions. There’s the wrinkled cortex (thought to be the seat of language and conscious thought) the hippocampus (the centre of emotion and memory), the ancient, muscle-coordinating cerebellum, and many, many others. In all, they are equivalent to the brains of nine-week-old foetuses.

So how are they made?

In fact, making a brain isn’t as difficult as you might expect. With a few simple ingredients – and an unquenchable enthusiasm for drenching things in alcohol – you too could have a miniature brain in a matter of months.

First off, you’ll need some cells. Lancaster’s team took theirs from samples of donated skin but, somewhat disconcertingly, to make this masterpiece of human evolution you could start with any cell type – be it nose, liver, or toenail.

Only stem cells are able to develop into all the body’s tissues, so next you’ll need to turn your cells into some of those. For this, the team used a kind of cellular youth serum, a protein cocktail which can rewind the clock and turn any cell back into an embryonic-like state. 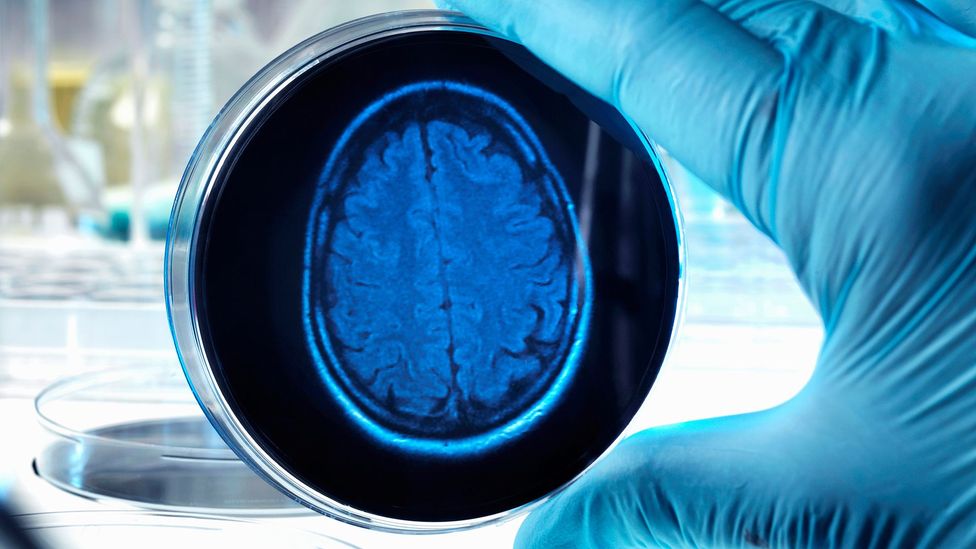 The tiny brains cannot "think" because they do not have a body with which to help process information (Credit: iStock)

After about a week of growth, you should end up with a sheet of cells which can be scraped off the petri dish and moulded into a ball.

Lancaster takes out what looks like an empty dish of pink liquid. “You can see them in there – they are tiny at this point,” she says. Sure enough, each well contains a white dot about the size of a comma. “They kind of want to become an embryo,” she says. (Watch the video below to see more.)

How to grow a mini brain in a petri dish

Eventually each stem cell will begin to specialise, turning the uniform balls into a jumble of different cell types. Among them will be brain cells.

To begin with, the researchers are doting parents, keeping their embryos fed and encouraging them to continue to grow. But they aren’t spoilt for long. Next the balls of cells are transferred to a new dish, this time with very little food. As the cells begin to starve, most of them will die off, leaving only the brain cells behind. “They are really robust – I don’t think anyone knows why,” she says.

Finally, the developing brains are enveloped in a blanket of jelly. “It’s the opposite of normal jelly – it starts off as a liquid which you pour on and it jellifies as it warms up in the incubator,” she says. The jelly mimics the tissue a brain would normally be surrounded with in an embryo – like a makeshift skull – and encourages them to develop relatively normally.

Then all you have to do is sit back and wait. Three months later, the finished product is about four millimetres across and contains around two million neurons. “A fully developed, adult mouse brain only contains four million, so you can do a lot with that number,” she says.

The brains are constantly buzzing with electrical activity as neurons zap off signals to one another – though Lancaster says this isn’t much of an achievement on her part. “It’s not very special but it does tell us that we are making functional neurons and that they are acting like neurons,” she says.

She compares it to the heart cells which scientists coaxed to beat inside a petri dish back in 2013; while heart cells are programmed to “want” to pump, neurons “want” to fire. “Even if you have a neuron by itself in a dish with no other neurons, it wants to fire so badly that it will connect to itself in order to fire,” she says. 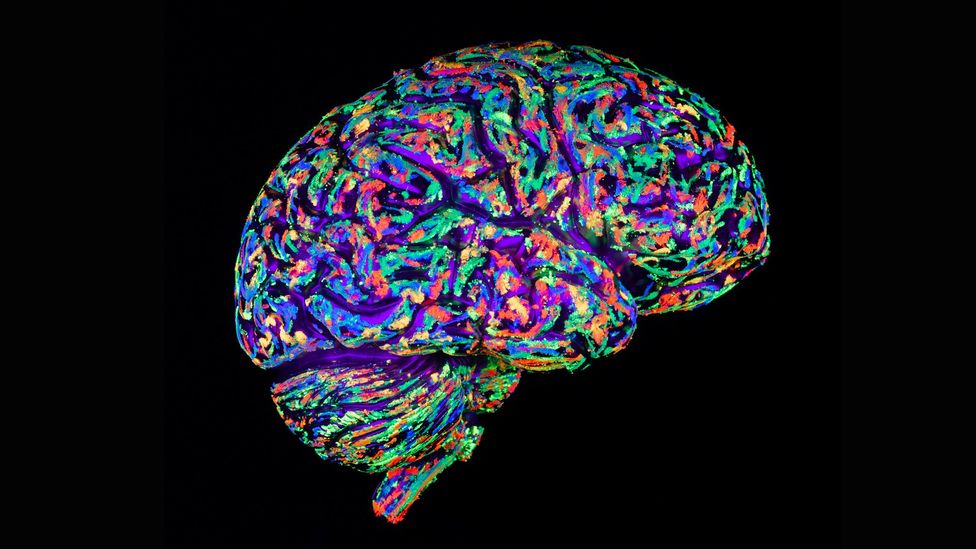 Lancaster's team's mini brains have two million neurons - half that of a mouse (Credit: iStock)

At the moment, Lancaster’s brains aren’t thought to be able to think. Nobody understands how the activity of our brains gives rise to thoughts – and it’s surprisingly difficult to define what a thought actually is – but it might go something like this. Usually, when we’re exposed to stimulation from the outside world – smells, sounds, ideas – our brains store the information by strengthening the connections between our neurons or forming new ones. The average adult will have as many as 1,000 trillion, which together give our brains an equivalent processing power to a one trillion-bit-per-second computer.

And here’s the rub. Even with all the same components as regular brains, without a body to provide information about the world around them, the brains simply can’t develop normally. “The neurons are working but they aren’t really organised relative to one another,” she says.

Lancaster gives the example of people who are born blind. “Since they aren’t exposed to light, the part of the brain that [these signals] would normally connect up is actually not going to form,” she says.

If you hooked lab-grown brains up to an EEG, you probably wouldn’t see anything. The so-called “brain waves” which the machines can detect occur as a result of millions of neurons firing in synchrony; when combined, their electrical signals are detectable through the scalp.

“This is kind of a good thing, I think. I’d have some issues if I thought there was proper network formation there,” she says.

But making conscious brains was never part of the plan. Instead, Lancaster is using hers to answer a decades-old mystery: for all our intellectual superiority, the genetic difference between humans and chimpanzees is around 1.2%. That’s only 12 times higher than the differences between individual humans (0.1%). Why? 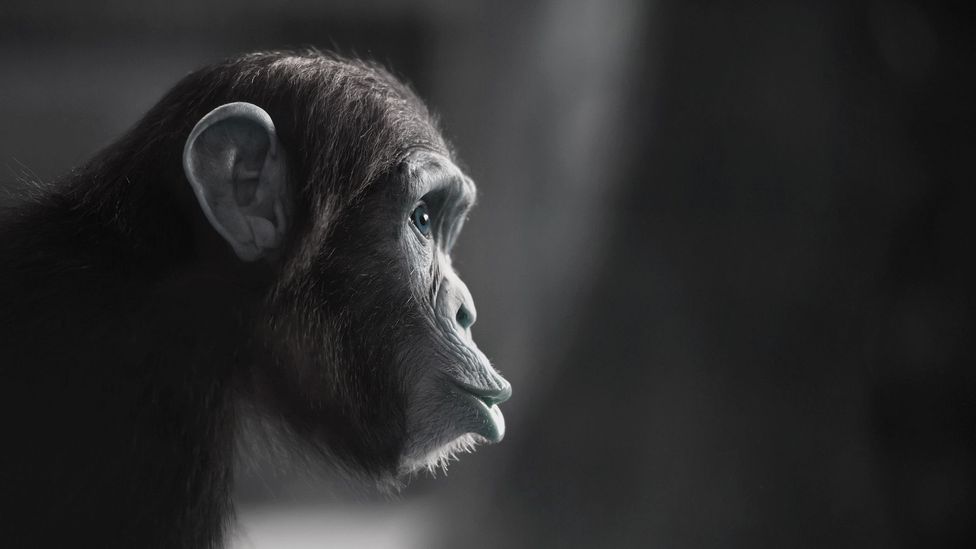 To find out, the team has been taking individual genes involved in brain development and replacing them with the chimpanzee version – then using these cells to make hybrid chimp-human brains. As they develop, the role of the gene often becomes clear; the brains with the chimpanzee gene may be significantly smaller than ordinary human brains, or contain fewer neurons, for example.

In other words, the brains allow researchers to do experiments they would normally never be allowed to do (imagine the controversy if a chimpanzee gene was added to an actual human).

Eventually, Lancaster hopes to do the opposite version of the experiments with lab-grown chimpanzee brains, too. This is tricky, because they are a protected species – you can’t just walk up to a chimpanzee and take a piece of skin – but they’ve found an alternative, if fairly unglamorous, supply of cells. “If an animal has a baby in a zoo, they would normally just throw away the placenta, but we can take these leftovers,” she says.

Several groups are working on improving the brains, introducing a blood supply so that they can grow larger

Elsewhere, the organoids are being used to study uniquely human diseases, from autism to schizophrenia. Historically, it was difficult to study their causes in the lab because – by their very definition – no other animal can get them.

Take autism. Severely autistic children aren’t able to speak – how can you study this disorder in a mouse if it was never able to speak in the first place?

By comparing brains grown from the skin of normal adults and autistic patients, last year scientists were able to show that the disease may be caused by an imbalance of the two main types of neuron, those which initiate signals (excitatory neurons), and those which act as a brake (inhibitory neurons).

“In a normal brain there’s a very fine balance between those two types, so you could imagine this could have a big impact on the way the networks function,” says Lancaster. 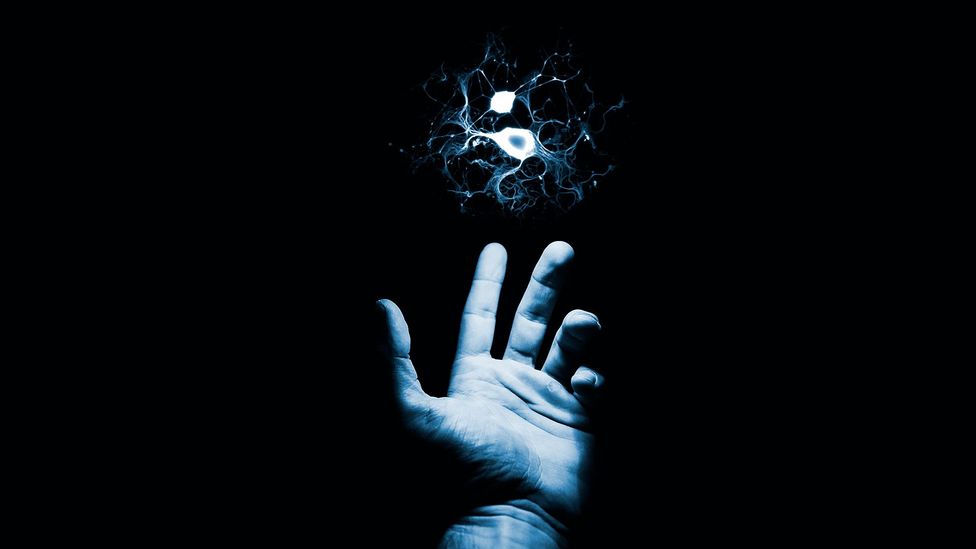 The man-made brains may help transform how our understanding of our minds (Credit: iStock)

The real breakthrough is that not only can the brains simulate these disorders, but they allow scientists to go back in time and work out why the autistic brains are different. “You can watch them over time and find out at what point during their development they start to look different. Well of course you can’t normally do that,” she says.

The man-made brains are already transforming our understanding of the brain, its disorders and what makes humans special. Though they were only invented in 2013, a quick Google search of “cerebral organoids” turns up 2,820 scientific papers already.

So what does the future hold? Several groups are working on improving the brains, introducing a blood supply so that they can grow larger; at the moment, the 4mm brains are entirely reliant on Oxygen and nutrients diffusing in from the surrounding liquid.

For many scientists, the ultimate goal is for the brains to function like normal brains – forming networks which can be stained, sliced up and studied like the brains of lab mice. But for now, the organoids are as inert as the bits of popcorn they resemble.