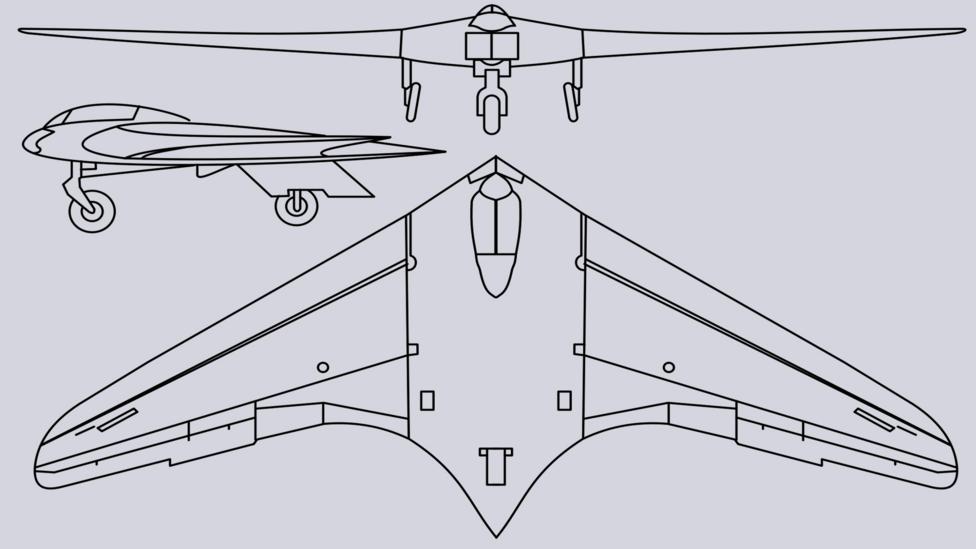 By Richard Hollingham 2nd November 2016
A flying wing – first developed in Nazi Germany – could prove one of the best ways to explore Mars.

“I was always fascinated by the albatross.”

Just one question in, and my interview with a Nasa chief scientist about exploring Mars has already taken a surprising turn. But throughout Al Bowers’ career birds have been his inspiration.

“Once you get used to looking at bird wings properly it’s difficult to go back to aircraft wings,” says Bowers from Nasa’s Armstrong Flight Research Center at Edwards Air Force Base in California.

“The wing dominates all the characteristics of the albatross and they have very high efficiency,” he says, “and that’s what we’re trying to achieve with aircraft now – eliminating all the unnecessary parts like tails.” 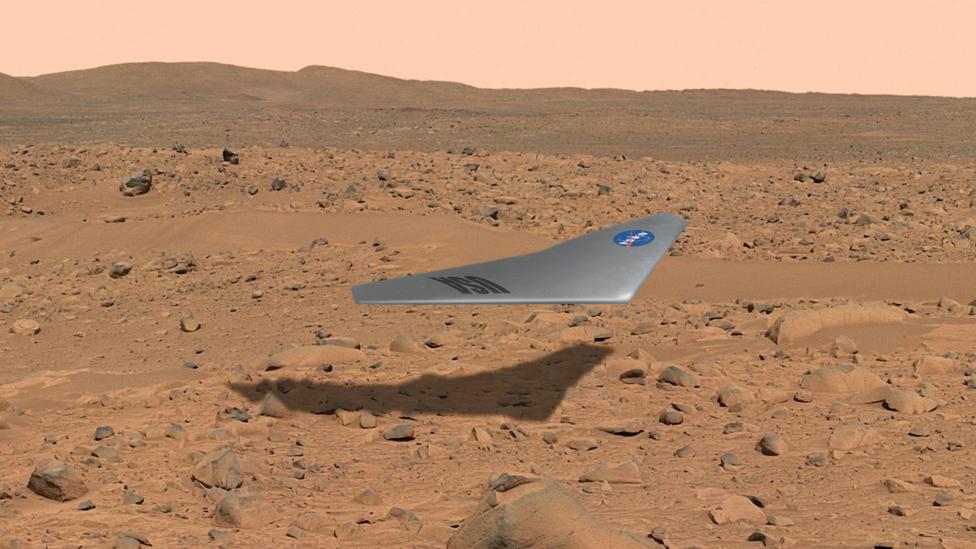 The flying wing would give scientists their first proof of the nature of the Martian atmosphere (Credit: Nasa)

Bowers calculates that designing aircraft without tails could reduce drag by some 20%. “Pretty soon you get down to a pretty minimal aircraft – a flying wing – with the minimum of parts, a minimum of drag and a very high efficiency.”

The flying wing isn’t a new idea. The first practical design was developed by engineers in Nazi Germany in the final months of World War Two. The reason we are still whizzing around the globe in aluminum tubes with tails bolted to the back is that flying-wing aircraft have had a tendency to fall out of the sky.

Not anymore. Bowers’ team has spent the last few years developing and successfully testing models of flying wing aircraft. But, as befits the world’s foremost air and space organisation, Bowers is not only looking at terrestrial applications. He aims to become the first person to fly an aircraft across the surface of Mars.

The big limitation for rovers is the amount of surface they can cover – Andy Ratcliffe, Airbus

“Mars is an incredibly hard problem,” says Bowers. “Flying on Mars ends up forcing you to look at aerodynamics in a very different way.”

Although Mars has about one-third the gravity of Earth, it has very little atmosphere – around 1% of Earth’s. “You end up having to fly something very small in order to get some interaction with air molecules,” says Bowers. “It’s similar to flying at around 30,000 metres above the surface of the Earth.”

A traditional aircraft would have little chance of staying aloft but a flying wing, with its increased efficiency, should be able to drift high above the surface. It could transform Mars exploration.

“The big limitation for rovers is the amount of surface they can cover,” says Andy Ratcliffe, a systems engineer for Airbus’ future programmes. The aerospace company is currently developing a European Space Agency (Esa) Mars rover at its Stevenage site in eastern England. The vehicle is due to land on the Red Planet in 2020.

The Ho 229's design was incredibly advanced for its time (Credit: Malyszkz/Wikipedia/)

“The most recent rover that landed on Mars is Curiosity,” says Ratcliffe, “but since it landed in 2012 it was only travelled nine kilometres – that’s around two kilometres per year – and when we’re trying to do a lot of surface science it limits the amount we can explore.”

Rovers have their advantages. They can study the ground in detail, take samples and the Esa rover will even drill into the surface to investigate signs of life. But aircraft can cover much more terrain.

Bowers’ pioneering Mars mission involves an unpowered flying wing just 60cm across and weighing only 1.5kg, which will be folded up into a 30cm-long cubesat spacecraft. The idea is to carry this as ballast on a future rover mission. It would replace some of the mass commonly used on Mars missions to help give spacecraft spin during the long cruise to the planet.

When it arrives at Mars, the spacecraft will be travelling at more than 5,000 metres per second

As the main spacecraft reaches Mars, the cubesat will be released. “We would be deposited many metres above the atmosphere,” says Bowers, “so there is the question of how to decelerate and deploy the aircraft.”

This is no trivial issue. When it arrives at Mars, the spacecraft will be travelling at more than 5,000 metres per second. Even in the Martian atmosphere this means re-entry temperatures of up to 2000C, impossible for Bowers’ cubesat to survive.

Fortunately, a team at Nasa Ames in Silicon Valley has come up with a solution: a parachute that works in space. The Exo-Brake parachute, which has been successfully tested from Earth orbit, needs only the most tenuous atmosphere to operate and is sufficient to slow the cubesat down without the heating caused by rapid deceleration. “Then,” says Bowers, “at around 3,000 metres above the surface, we would unfold our little airplane and fly away.” 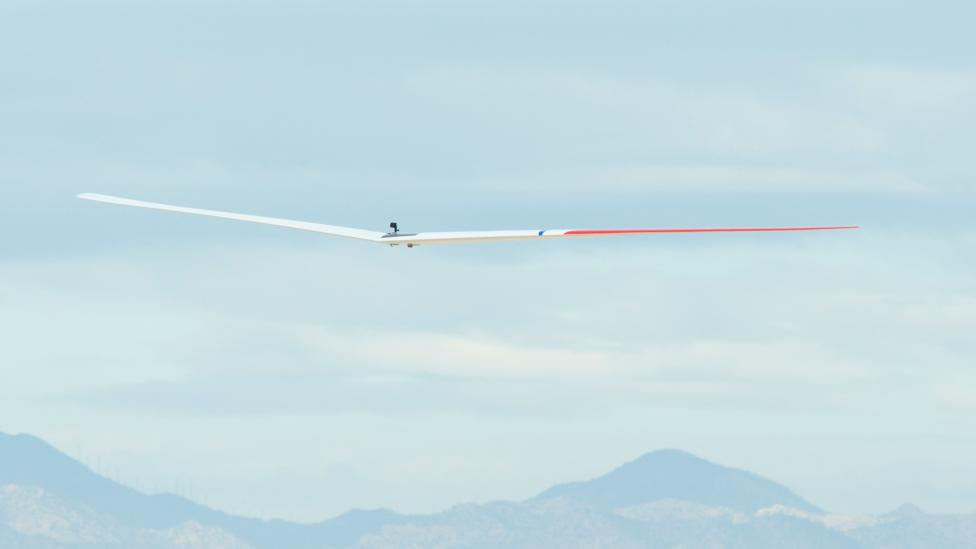 But don’t expect a long leisurely glide. The total flight time will be just four minutes. “It turns out in order to interact with the atmosphere we have to fly at around 600km/h – almost airliner speeds with this tiny glider.”

To navigate, the glider will be loaded with visual maps of the surface and during its rapid descent it will measure, for the first time on Mars, atmospheric pressure and temperature. “There’s a model for the Mars atmosphere but it’s very rudimentary,” says Bowers. “We’d like to gather enough data to validate the model.”

Bowers’ team is planning to test a prototype cubesat and glider at high altitude in Earth’s atmosphere later this year. Although the Mars flying wing is not yet adopted as an official Nasa mission, if the trials are successful, he is confident he will be able to persuade the agency to take his aircraft to Mars.

In the meantime, Esa is looking at alternative technologies to cover a similarly large area. Having previously investigated the idea of a Mars hopper mission – a nuclear powered robot that would bounce across the surface – Ratcliffe’s Airbus team is currently examining the potential of releasing up to 50 ‘penetrators’ into the soil across an area some 100 kilometres across. These would gather data on soil and geology, again covering much more ground than a single lonely rover.

“The really interesting time will be when we combine rovers and airborne systems,” says Ratcliffe. “We’d have a small aerial system that would land on the rover and it sends out the drone to scout out beyond the horizon to see if there’s something interesting there.” Because of the thin Martian atmosphere, these would be small, lightweight and might even have flapping wings. 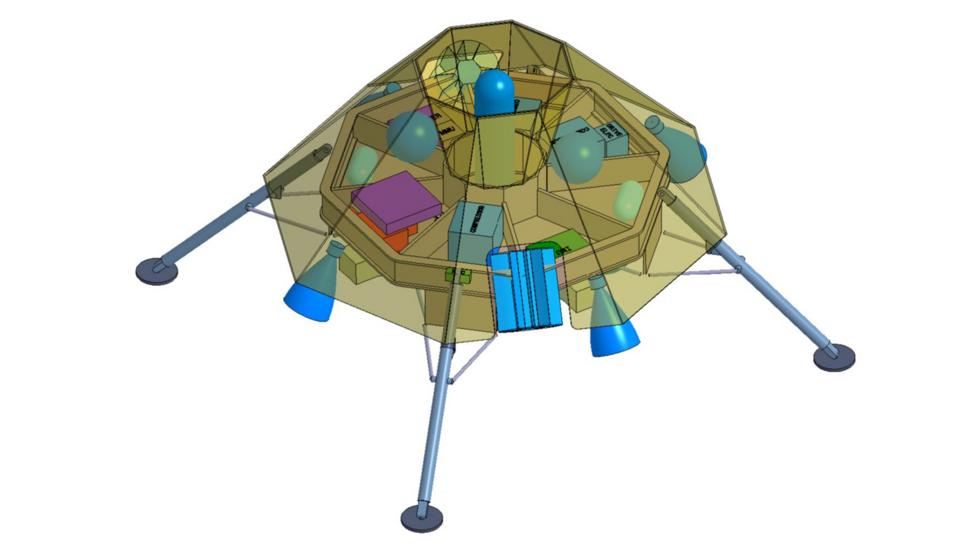 Esa has already investigated the concept of a 'hopping' rover (Credit: Airbus)

So could humans ever fly aircraft across the surface of Mars – perhaps on a day out from Elon Musk’s Martian colony?

“I believe it’s possible to have aircraft on Mars to move people,” says Bowers. “They would be very limited flight duration and you wouldn’t go very far but for certain experiments I can see that would be necessary.”

As he prepares to test his Martian flying wing mission Bowers is certain that future aircraft, on whatever planet they fly, will continue to take inspiration from nature.

“I’m convinced that birds still have something to teach us about efficiency,” he says, “there’s still a lot to learn.”