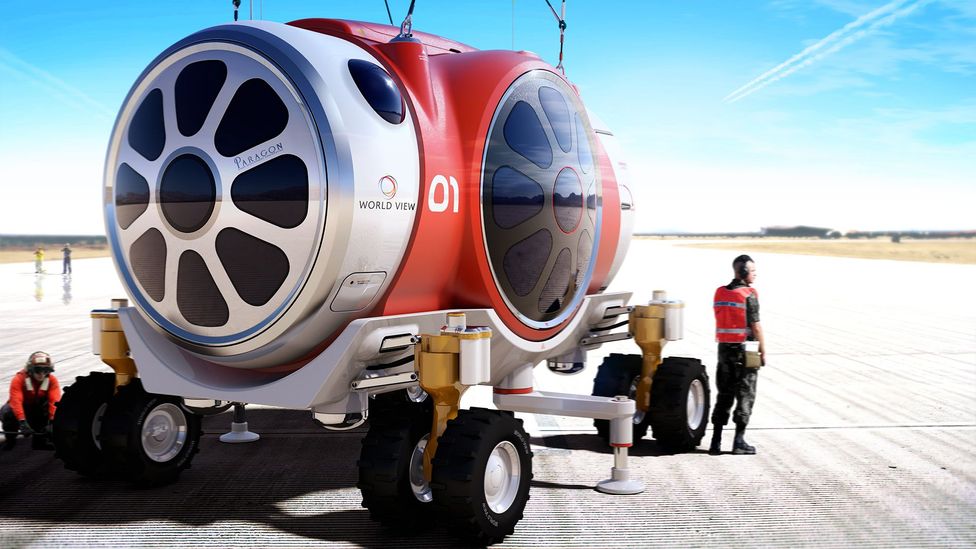 By Stephen Dowling 8th November 2016
Few of us will know what it is like to venture into space. But balloons – based on designs that paved the way to the stars – may get us closer than ever.

You gaze out the window – and it’s a big window – at the view outside. You’re so far up that the ground below is a sweeping panorama devoid of all detail other than the most majestic: broad rivers, mountains rising up from carpet-like plains, the silver and shimmer of sprawling cities far below. The horizon is not straight; it curves at either end.

It is the sky that really looks different, however. It is not the deep navy blue that you usually gaze at while you wait for the in-flight crew to offer you a choice of chicken or beef; here it is almost black. The stars, mostly invisible down on terra firma, sparkle in their many thousands. It’s a view you have never seen before.

This is no ordinary flight. As you gaze out of the giant window that looks like the business end of one of the TIE fighters from Star Wars, the Airbuses and Boeings are plying airline routes far below you. This is one of World View Enterprises’s balloons, one that the company intends to take paying passengers as high as 32 kilometres above the Earth’s surface – 20 miles, or 105,000ft.

These balloons are not yet a commercial concern. The company, based in Tucson, Arizona, has only carried out test flights so far. It hopes to have its first customers climb inside its capsules next year. But this is only the latest development in high-altitude ballooning, an often-forgotten part of humanity’s conquest of both sky and space.

HOW LONG HAVE WE BEEN PILOTING BALLOONS?

Ballooning offered would-be aviators a chance to ascend into the sky more than a century before the Wright Brothers first flew. Jacques Charles and Nicolas-Louis Robert piloted the first hydrogen gas-filled balloon above Paris in December 1783; Charles flew the balloon on his own later that day, climbing as high as 3,000 metres before developing earache and returning to Earth. 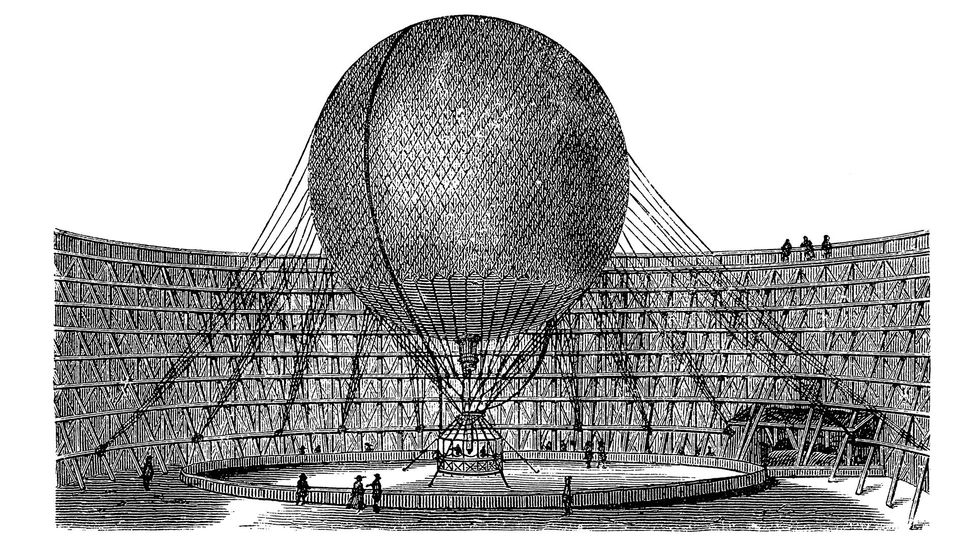 Though balloons were supplanted by the arrival of aircraft in the early 20th Century, they were able to soar much higher than early planes. In 1935, Captains Orvil Anderson, William Kepner and Albert Stevens took a high-altitude balloon up to 74,000ft (22.4 kilometres) – high enough that they became the first humans to see the curvature of the Earth with the naked eye. The desire to soar even higher was born.

WHAT WERE THE CHALLENGES?

Anderson, Kepner and Stevens made their flight in a pressurised capsule, much like those used to descend to the bottom of the sea. A decade later, in 1946, US scientist Paul Stapp believed re-breathing 100% oxygen would help high-altitude balloonists avoid the bends, and tested the theory by flying in an open gondola. Stapp’s hunch was correct, and Nasa astronauts breathe the same mix of air to this day. 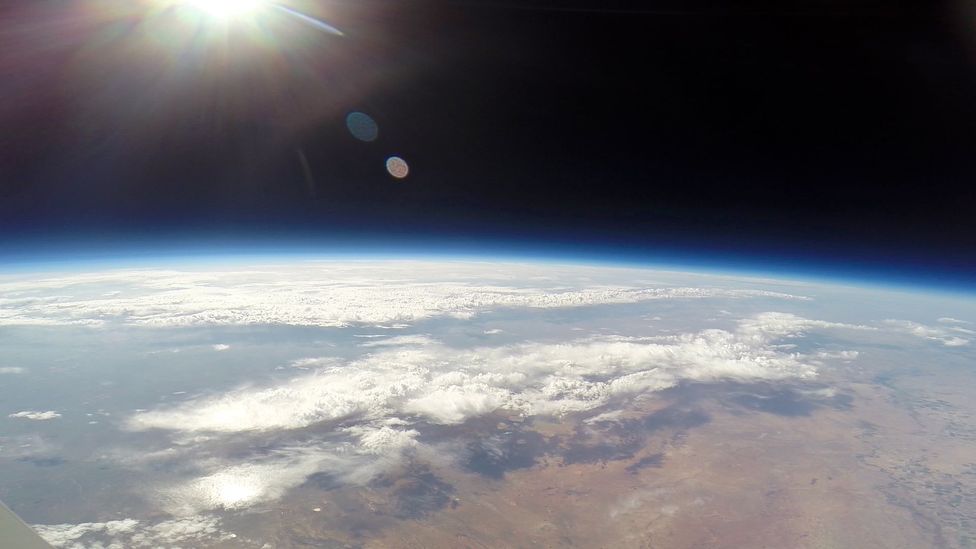 At such high altitudes, the sky is a deep black, and you can see the curvature of the Earth (Credit: World View)

In 1957, David Simons became the first person to reach 100,000ft – the equivalent of 30 kilometres (18.7 miles) high. Simons’ flight was intended to test the effects of spaceflight on the human body – and whether humans could survive being outside the Earth’s atmosphere. The capsule built for this flight was made by Otto Winzen, a German engineer regarded as one of the chief architects of successful high-altitude ballooning. Winzen developed an early life-support system, a way of “scrubbing” carbon dioxide out of the capsule’s atmosphere, and a way of making sure the interior did not get too hot or too cold. Winzen’s techniques allowed people to soar to the edge of space, and return to Earth without harm.

CAN WE REALLY BALLOON TO THE EDGE OF SPACE NOW?

In 1999, two people stayed aloft for 20 days on a non-stop balloon trip around the world. More recently, companies like World View and the Spanish-based Zero2infinity have worked towards manned ‘edge of space’ tourism flights, testing the technology by making unmanned commercial flights carrying scientific equipment. Zero2infinity plans to carry out its first passenger flight in 2018. 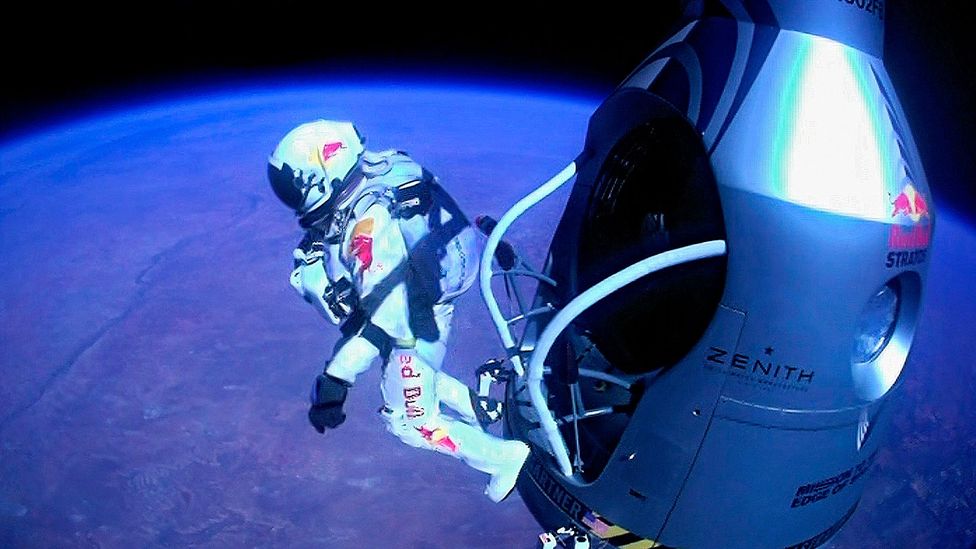 Felix Baumgartner carried out his record-setting skydive after floating to the leap-point in a high-altitude balloon (Credit: Science Photo Library)

The most high-profile balloon flight of recent times involved one which carried Austrian adventurer Felix Baumgartner on his way to break the world’s highest skydive – leaping from a balloon-tethered capsule at 127,852 ft (36.4 kilometres) above New Mexico.

Balloons may not be as attention-grabbing as the likes of Sir Richard Branson’s Virgin Galactic, but flights will be much cheaper - and passengers won’t require the nerves of Felix Baumgartner.

World View plan to take five paying passengers – and two crew – up on flights that will cost some $75,000. “Surrounded by viewports, you will be able to spend two hours looking down on the Earth as you float above the planet,” wrote BBC Future’s Richard Hollingham earlier this year. “There is even internet access on board, so you can update your Facebook status. Won’t your friends just love that.”

The first paying passengers will be able to gaze out at a view of our planet very few humans have seen. And the only ones with a better view are likely to be orbiting the Earth many hundreds of miles above on the International Space Station.

And if you want a ticket for that, it really is going to cost you.