A small drone rises into the air. The operator checks its bird’s-eye view on a screen before nudging a control and sending the drone buzzing across town.

This could be an enthusiast anywhere in the world. The global market for small camera-carrying flying machines has gone from a few thousand a year in 2010 to many millions. But in places like Iraq, consumer drones have also become weapons of war.

Off-the-shelf drones began to be used by so-called Islamic State in 2014. At first they used them to film propaganda videos from the air. Then they became scouts. A drone video of a Syrian military base was released shortly before the base was hit by multiple suicide bombings that targeted its weak spots, suggesting that the drone had been sent in on a surveillance mission. 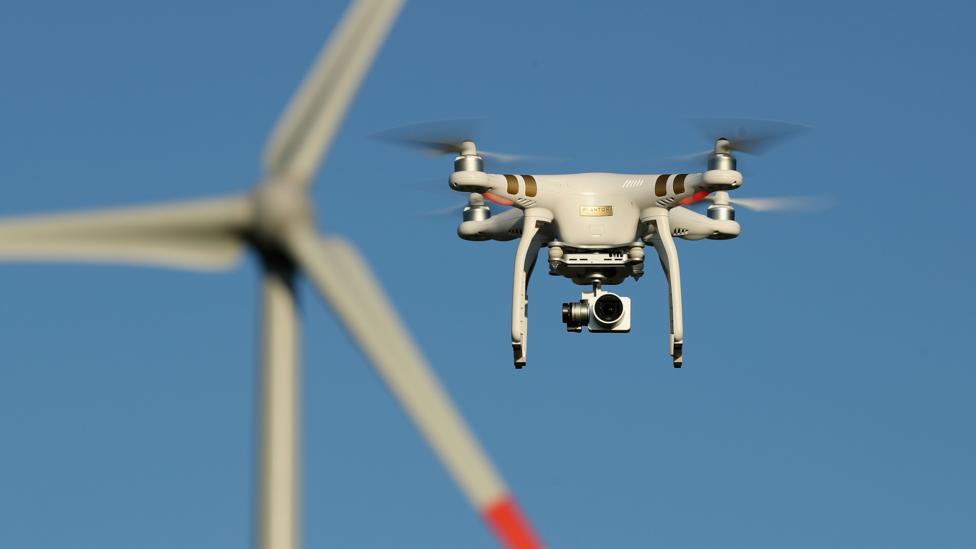 Some consumer drones can fly for up to half-an-hour and send back crisp high-definition video from two miles away (Credit: Getty Images)

Other IS drones have been used to guide armoured truck bombs to their targets in real time. And according to US military sources, IS are now using drones in Mosul to watch where mortar rounds are falling so they can adjust their aim.

IS are not the only ones with drones. Several other groups in Syria and Iraq are now flying them, including Hezbollah. Even Iraqi army units have deployed consumer drones in the battle for Mosul, spotting car bombs and carrying out tactical reconnaissance.

But now such drones may be more than spies. IS have started turning cheap drones into lethal guided missiles by fitting them with explosive charges. So far there have been few casualties but the tiny, low-flying weapons are a growing problem. What’s more, the world’s militaries are struggling to keep up. To maintain their edge in the face of easily obtained commercial hardware, armies are going to have to change the way they equip themselves.

To maintain their edge, armies are going to have to change the way they equip themselves

Consumer drones are attractive because they provide a cheap tool for seeing over a ridge, or getting a close-up view of a distant building without exposing yourself to fire. The military have their own tactical drones, but these are rare and expensive. The British Army’s miniature Black Hornet cost around $100,000 (£80,000) each. Yet consumer drones like the popular DJI Phantom – which can fly for up to half-an-hour and send back crisp high-definition video from two miles away - can be bought online for less than $1,000 (£800). 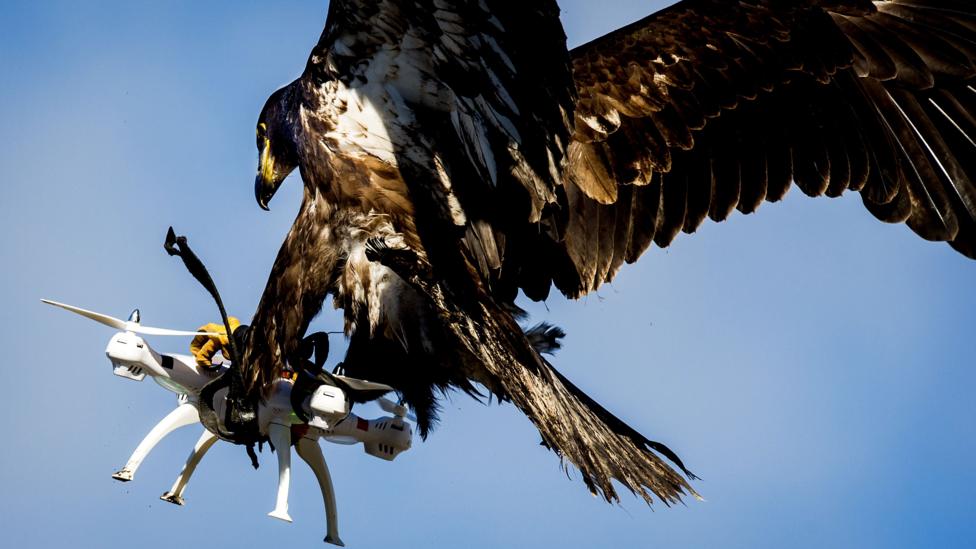 Drones are difficult to shoot down so other options such as using nets, rubber balls or trained eagles are being explored (Credit: Getty Images)

Now the tricky part is arming them. Fitting a drone with weapons still requires some technical skill but it is being made easier with cheap add-ons intended for hobbyists, such as a kit which allows any drone to drop a hundred-gram toy bomb filled with powder. In August, Hezbollah released a video showing small bombs dropped from commercial drones.

A new US Army handbook recommends that at least one soldier in a patrol should always be on the look out for drones and warning that a swarm of drones could overwhelm defences.

Consumer drones are getting more advanced all the time. The latest DJI Mavic has sensors to automatically avoid obstacles like trees and buildings, while a Precision Landing feature navigates to a precise spot by comparing video images. Similar technology could soon help drones to operate autonomously, with no need for operator control or satellite signals. This may make them impervious to electronic jamming.

Drones are also difficult to shoot down, so new weapons are being developed to tackle them. The US Army recently released a video of solders using a device like a rifle with a TV aerial attached against a drone in a training exercise. This is the Battelle Drone Defender which fires a beam of radio waves to jam both the drone’s remote control link to its operator and its GPS guidance. The video shows the baffled drone shutting down and landing automatically. Other options being explored include trained eagles, nets and rubber balls.

Drone makers have tried to prevent the misuse of their products by building in software restrictions that prevent their drones flying in forbidden areas such as airports, a technique known as geofencing. But while geofencing may stop inexperienced drone users, enthusiasts have shown it can be disabled with relative ease. 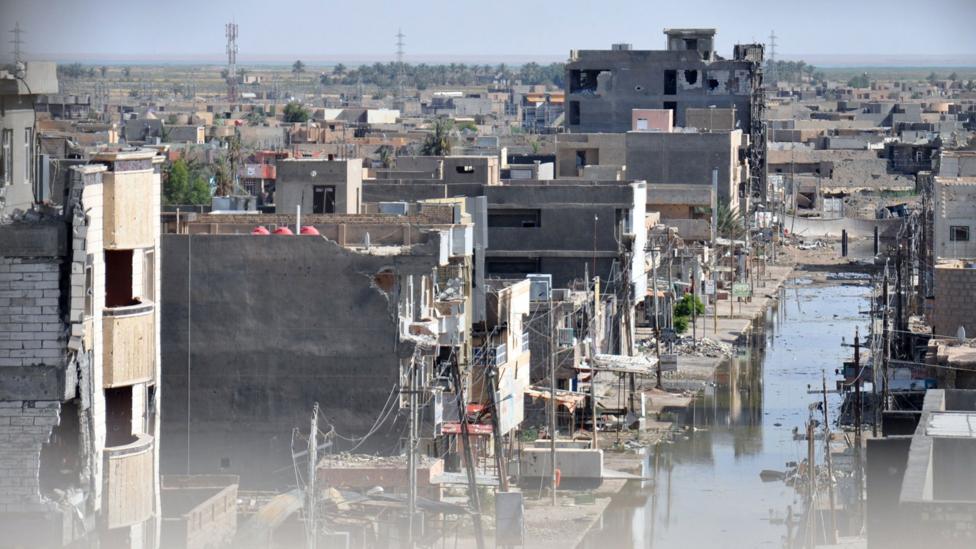 Earlier this year, investigators inspected a captured IS workshop in Ramadi where drones were being made from scratch (Credit: Getty Images)

The threat posed by small consumer drones is limited by their small payload, so ambitious militant groups are aiming for something larger. In February this year, field investigators from Conflict Armament Research inspected a captured IS workshop in Ramadi where drones were being made from scratch. The investigators found unfinished airframes and wings made from wood and Styrofoam, along with flight electronics including camera controllers and gyroscopes. The electronics included basic components from Korean, Japanese and Turkish suppliers.

A dismantled Soviet-made Strela surface-to-air missile was found in the same workshop, suggesting IS was planning to fit the warhead to a drone. There are concerns that Hezbollah are planning drone attacks on helicopters. Drones cannot be detected by missile warning sensors and are unaffected by decoy flares. They would be easy to avoid if seen, but spotting a small drone from a helicopter may be difficult.

Drone proliferation has largely caught the military by surprise. Just as mobile phones used to coordinate attacks and set off bombs in Iraq required new tactics and technology, more devices like special detectors and jammers will be needed to counter the small drone threat.

But there is a bigger lesson. Economies of scale make consumer drones cheaper than their military counterparts. The commercial sector produces a more capable generation of drones every year or so. The military can take several years to catch up.

That may be why US Marine Corps Gen Robert Neller wants to give every Marine squad its own quadcopter in 2017. “They’re like a thousand bucks,” he told a press conference in September.

The US Defense Science Board also recently recommended changing how they go about developing their kit. Rather than using custom-built components, military drones may soon be built using off-the-shelf commercial components and open-source software – assembling drones quickly and cheaply in much the same way IS was doing in its workshop in Ramadi.

This would be a big shake-up in the defence industry, which is traditionally a closed world that operates on long timescales. But to keep up with the drones in today's conflicts, change is exactly what’s needed.

David Hambling's book Swarm Troopers: How small drones will conquer the world is out now.

If you liked this story, sign up for the weekly bbc.com features newsletter, called “If You Only Read 6 Things This Week”. A handpicked selection of stories from BBC Future, Earth, Culture, Capital, Travel and Autos, delivered to your inbox every Friday 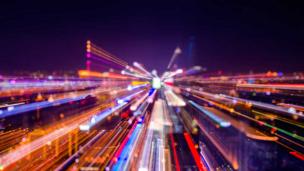 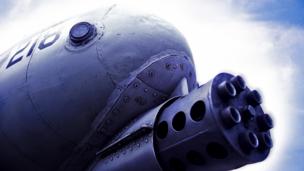 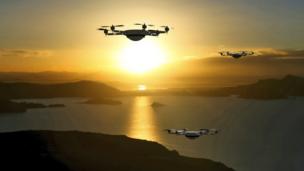 The oil-rich city betting on drones 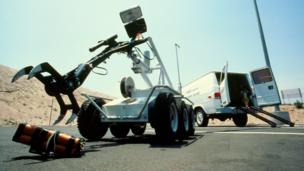 The robots that risk all