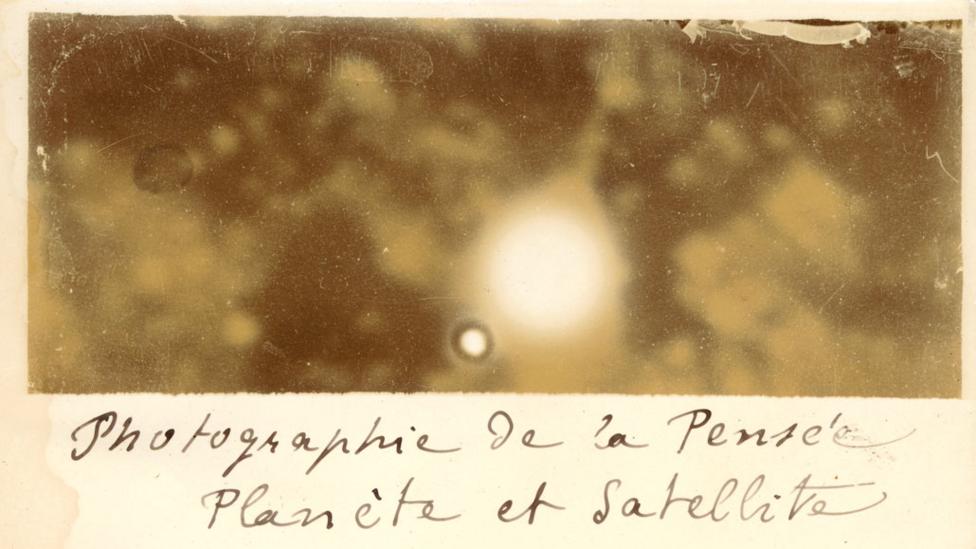 By Josh Gabbatiss 17th January 2017
A French Commandant’s belief that he could photograph the inner workings of the mind has important lessons for modern science.
S

Spare a thought for poor Madame Darget. How she must have sighed when her husband bounded over to the sofa in his office where she was attempting to rest. In his hands, he clutched a box of photographic plates.

“I am going to put out the lamp and try to take a fluidic print over my forehead,” Louis Darget later reported himself as telling her. “I will hand you a plate for you to do it as well.”

Dutifully, Mme. Darget held the plate about an inch in front of her face as her husband had instructed and, in the darkness, felt her eyelids droop. She was awakened with a jerk as the cool, smooth plate pressed against her face.

The next day, Commandant Darget burst into his wife’s room brandishing the developed photograph. Beneath the ill-defined, bird-shaped blur on the paper, her husband had scrawled in his loopy handwriting: “Photographie du reve. L’Aigle.” It translates as “Dream photography. The Eagle.” (see image, below) 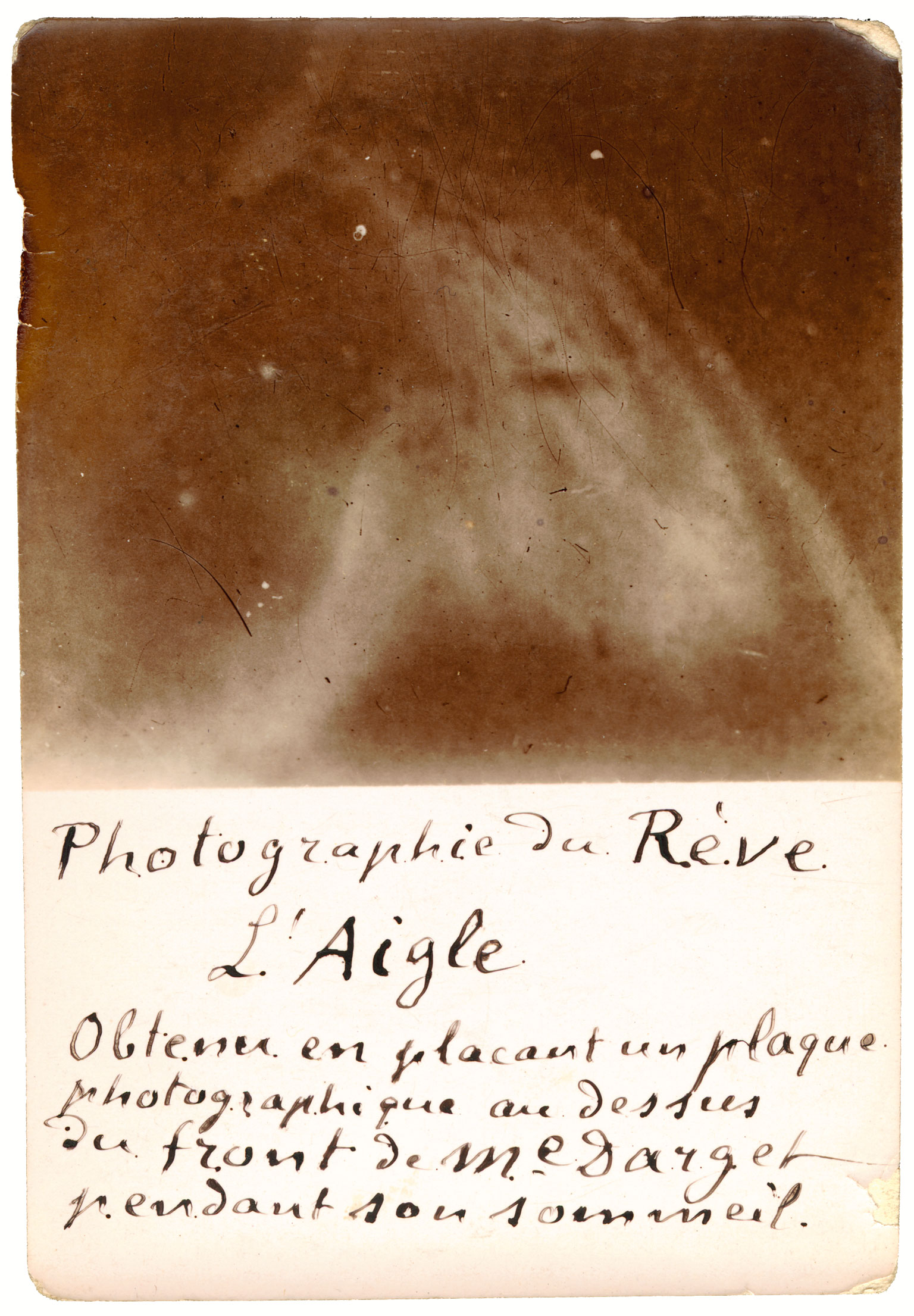 This was one of the images that convinced Commandant Darget he had successfully captured a photograph of thoughts being projected from the human brain. In a letter to the French Academy of Sciences in 1904, he claimed the method could reveal the inner workings of a person’s mind. While he was clearly misguided, his story holds some important lessons for modern scientists.

At the turn of the 20th Century, Darget’s experiments were certainly in line with the fashion of the time. A decade earlier, German physicist Wilhelm Rontgen had been the first to describe X-rays, using them to capture an image of the bones in his wife’s hand. Soon afterwards, Marie and Pierre Curie demonstrated the radioactivity of polonium and radium.

Suddenly, the world appeared full of strange, invisible phenomena that could be revealed using technology. Today, Instagram filters and Photoshop touch-ups are used to obscure reality, but to a handful of pioneering scientists – and pseudoscientists – in the early 1900s, photography was the gateway to a previously unseen world.

Soon enough, all sorts of radiation were being ‘discovered’, including Rene Prosper Blondlot’s now thoroughly discredited ‘N-rays’. Then there was Darget’s offering: “human radiation” in the form of thoughts, which he dubbed ‘V-rays’. The ‘V’ stands for “vital”.

Darget developed a portable radiographer, consisting of a photographic plate attached to a headband

“When the human soul produces a thought,” wrote Darget in 1911, “it sends vibrations through the brain, the phosphorus it contains starts radiating, and the rays are projected out.”

To capture these rays, Darget developed a “portable radiographer”, consisting of a photographic plate attached to a headband. When placed on a subject’s forehead, this device would produce abstract, blurred images that Darget would interpret.

Among the evidence he accumulated was the photo of his wife’s “Eagle Dream”, alongside other images of “a bottle, a second bottle, a walking stick”. 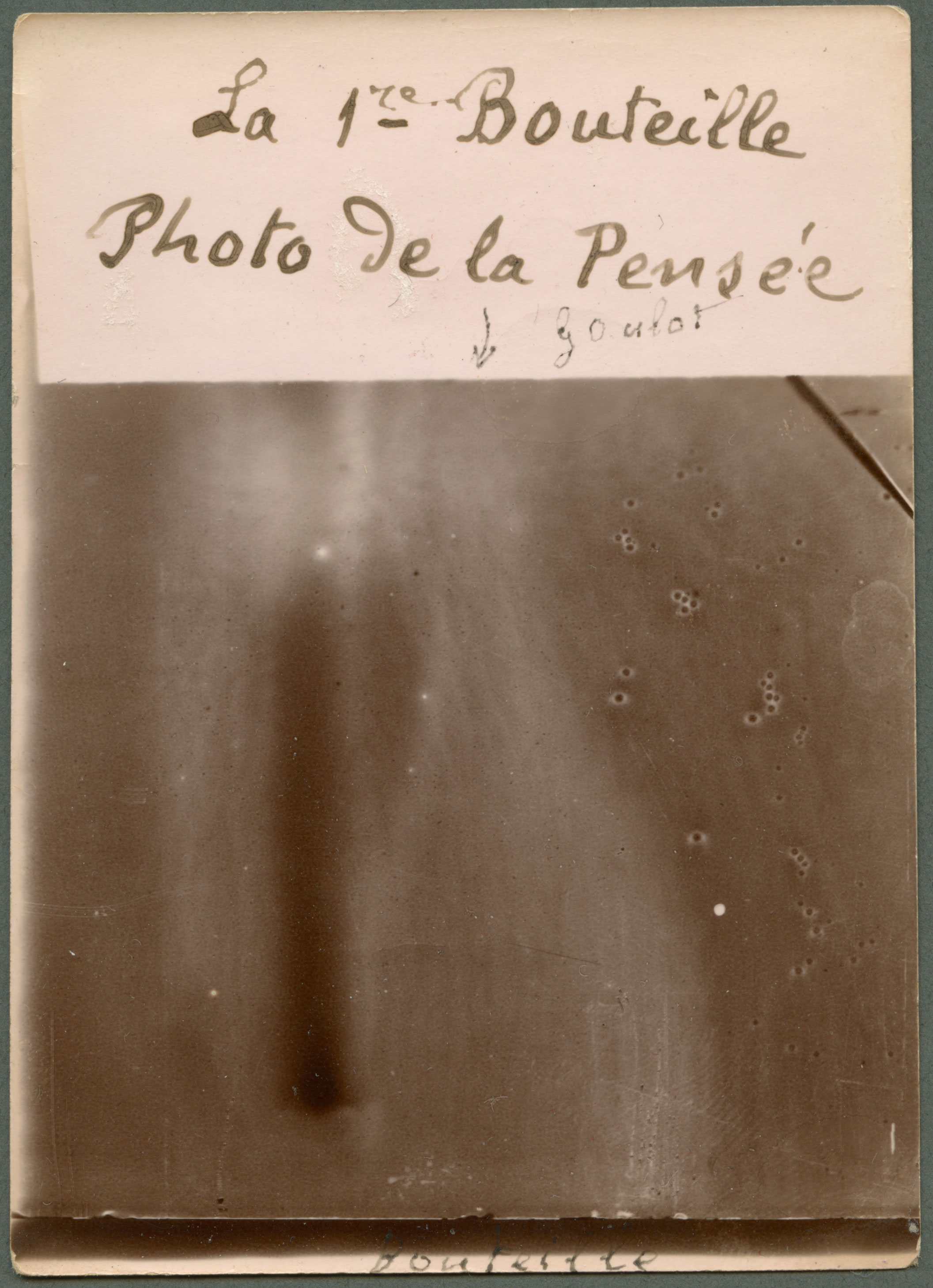 Peer closely, and you can see a bottle (Credit: IGPP)

In one experiment with a “Monsieur H”, a device worn while playing the piano revealed a portrait of Beethoven, or so Darget claimed.  It’s worth noting, incidentally, that Mme. Darget didn’t remember dreaming of an eagle during the “Eagle Dream” experiment, in spite of her husband’s conclusion.

Given its intangibility, it is perhaps unsurprising the study of radiation became entangled with the supernatural. Darget and his contemporaries used words like ‘ray’ to give their work more scientific legitimacy, but mixed them up with talk of souls and “vital forces”.

But while various charlatans at the time were using “spirit photography” to mislead, Darget clearly felt his pursuit was a scientific one, judging by his correspondence with the Academy. He was joined in this belief by medical experts such as neurologist Jules Bernard Luys and physician Hippolyte Baraduc.

Ultimately, however, their efforts were in vain. “[These] theories were scientific in appearance only,” writes senior curator of photography at San Franscisco Museum of Modern Art, Clement Cheroux in his book The Perfect Medium: Photography and the Occult. “While this might have fooled the movement’s followers and the wider public, it was unlikely to escape detection by scientists themselves.”

As it turned out, the patterns on the photographs were merely the result of poorly diluted developing solution and the heat of human skin. One attempt to test their claims initially appeared to confirm Darget’s principles – no patterns appeared on a plate placed on a corpse. But when the corpse was later heated to human body temperature, exactly the same marks appeared as on a living human. The game was up. 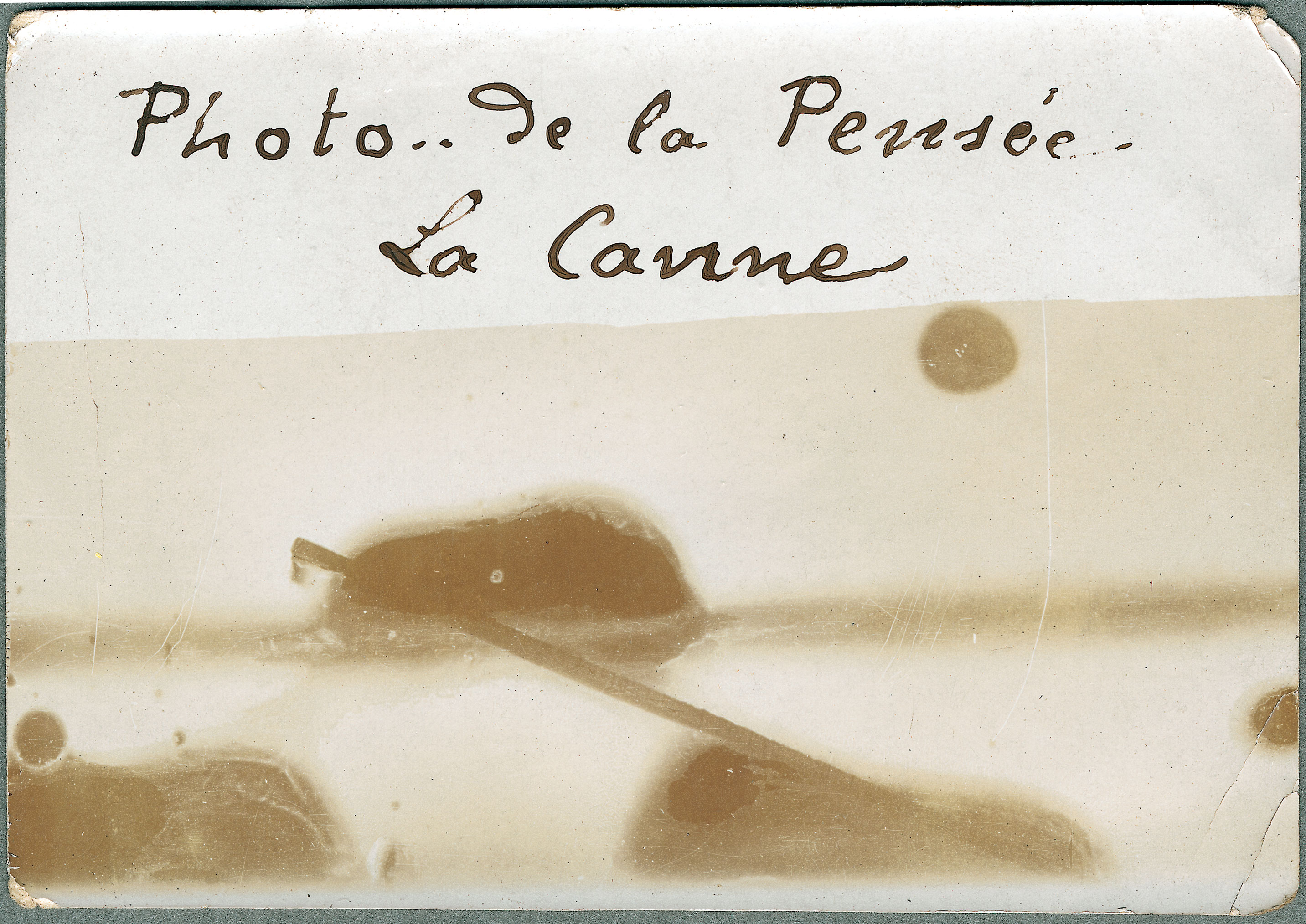 Is that a walking cane? (Credit: IGPP)

Yet, this was not the death of “thoughtography”. Over the years, various self-proclaimed psychics have claimed to have found ways of capturing their thoughts on film. The most famous of these is probably Ted Serios, a Chicago bellhop who came to the public’s attention in the 1960s when psychiatrist Jule Eisenbud published a book about him in the belief his powers were genuine. They weren’t, of course.

So can thoughtography be consigned to the scrapheap? Well, not entirely. In the 21st Century, a whole new generation of thought photographers have emerged, this time backed by extensive scientific training and complicated machinery.

In the decades since its inception, functional magnetic resonance imaging (fMRI) has been heralded as a pioneering tool for mapping the inner workings of the human brain, which it undoubtedly is.

By creating images of blood flowing to different parts of someone’s brain, and identifying the thought patterns they correspond with, some suggest we should be able to read minds. Like so much in science, however, things aren’t quite so simple.

“The issue is that a thought isn’t something that occupies space. My thought that ‘I hope Manchester United do badly this year’ doesn’t correspond to particular physical events,” explains Raymond Tallis, a philosopher who is a former physician and clinical scientist. “That thought belongs to a nexus, a whole network of ideas such as football, partisanship, etc.” 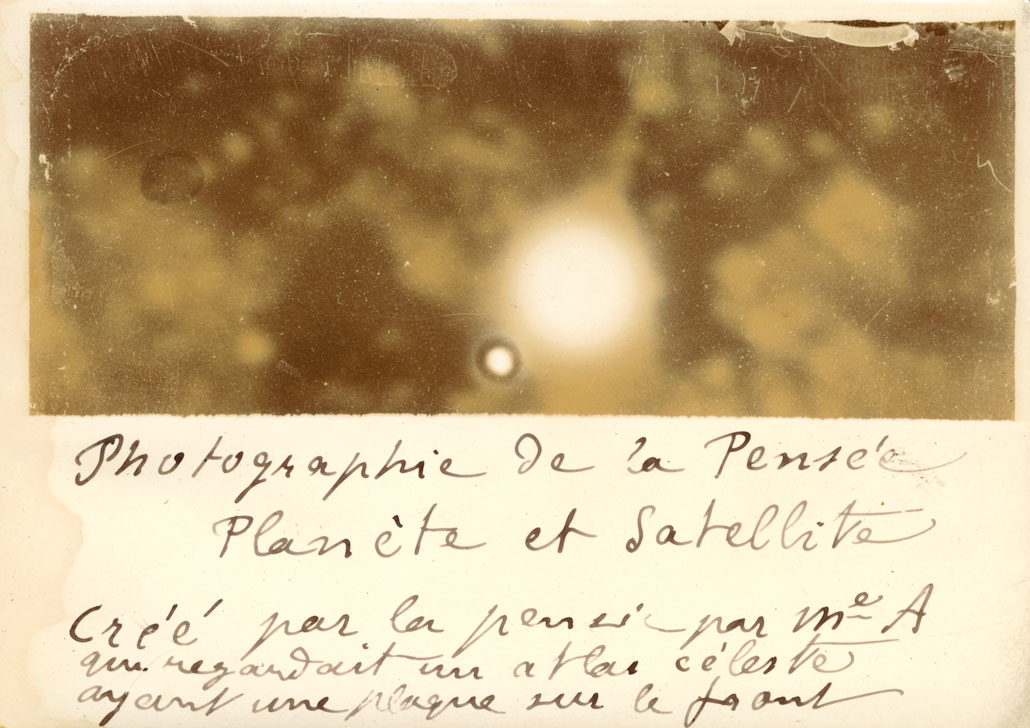 The enthusiasm to definitively demonstrate that a certain pattern corresponds to a certain thought has been dismissed by some neuroscientists as “blobology”. Studies revealing high rates of false positives in fMRI research have further underlined the need for caution. While fMRI is very useful, it is not yet capable of reading someone’s mind.

In most respects, fMRI is a million miles away from the ridiculous experiments performed by Darget, but there are similarities

In most respects, fMRI is a million miles away from the ridiculous experiments performed by Darget, but there are similarities. “He too was subscribing to a very naive theory of thoughts,” says Tallis. “That they somehow represent that which they are about. So a thought about an eagle would have some eagle-like features, which is nonsense. What would a thought like ‘I don’t think God exists’ look like?”

Amusingly, just as a human corpse was used to debunk Darget’s claims, a team of mischievous researchers showed that signs of brain activity similar to those from other fMRI studies could be demonstrated by strapping a dead salmon into the machine.

The main parallel with Darget, however, comes from the very human desire to understand the brain – especially other people’s brains. Certain sections of the scientific community, and particularly the scientific press, really want to believe that mind reading is possible, even though the evidence so far is far from conclusive.

We shouldn’t be surprised by this desire. Mind reading would be an incredibly useful tool, not just for selfish reasons but also practical ones. Imagine being able to pull thoughts from a criminal suspects mind instead of having to catch them out in a lie. And there is another driving force behind this research as well.

“There is a feeling that if you’ve escaped from a supernatural view of the world, you must believe in a naturalistic view of the human mind – that it’s essentially brain activity,” says Tallis. In the absence of a human soul, or “vital rays”, we want science to explain everything, but for the time being at least, there’s nothing wrong with allowing a little mystery.

Images courtesy of The Institute for Frontier Areas of Psychology and Mental Health (IGPP) in Germany.

Mosaic@Future
1The shocking new cure for extreme pain
Tomorrow's Lives
2‘I can read your mind’
World-Changing Ideas
3We’ve got human intelligence all wrong
In Depth
4Does everyone have a doppelganger?
Around the BBC