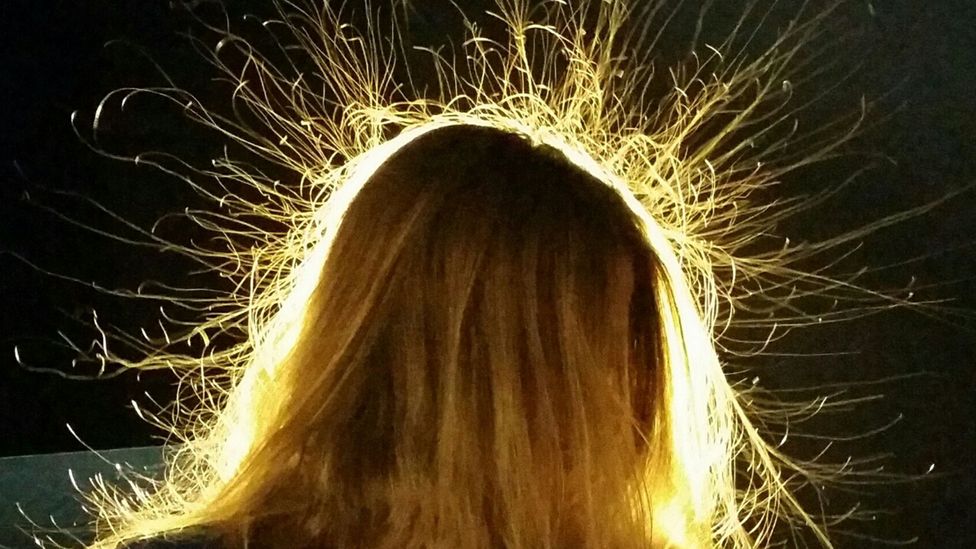 By David Robson 15th February 2017
In the 19th Century, a titillating electric shock was said to cure many diseases. Now neuroscientists are coming to reinvestigate the techniques – but do they work?
A

Are you tired? Plagued by migraines? Or suffering from anxiety? Then Isaac Pulvermacher had the answer with his famous “hydro-electric belt”.

Shaped like a cowboy’s bullet belt, the device was really a series of small batteries with two clasps at either end. Applying these electrodes to the offending areas, you would then enjoy a titillating electric current coursing through your flesh.

Appearing at the first World’s Fair at the Crystal Palace, London, in 1851, the device soon became a talking point in fashionable drawing rooms across the world – with 50,000 people a year reportedly plugging in.

If Dickens ever put the device to the test, he did not survive to report the result

Even Charles Dickens was curious. During his gruelling reading tours of the late 1860s, the writer suffered from agonising leg pain – and on the advice of the actress Marie Bancroft, he ordered Pulvermacher’s “magic band” on 3 June 1870.

“If the Pulvermacher magic band was put to the test, the patient did not survive to report the result,” notes the medical historian Robert K Waits. Dickens’s very last letter was addressed to Pulvermacher & Co, acknowledging receipt.

Today, scientists are again exploring the use of electro-therapy to treat a range of disorders – and some desperate patients are even attempting to build their own ‘medical batteries’ that are surprisingly reminiscent of Pulvermacher’s Chains. “There’s this re-emergence of things that people think are advances in the medical field,” says Jeff Behary, who has curated a museum of these electro-therapeutic devices in Florida. “But if you go back, you can see they were doing it 100 years ago.” But what are the real benefits of these devices? And what are the risks? 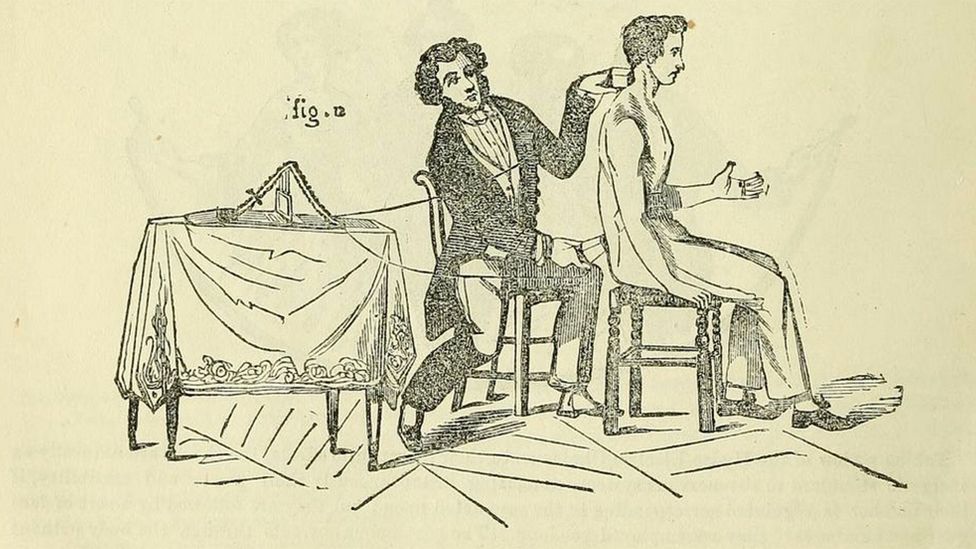 Jolts of electricity were though to cure all sorts of physical and mental ailments (Credit: Wikimedia Creative Commons)

Despite his fame, Pulvermacher was by no means the first to consider the therapeutic potential of electricity. In 48 BC, Emperor Claudius’s physician, Scribonius Largus, recommended placing an electric torpedo fish on the head to cure migraines.

Largus is unlikely to understood the physical force at the source of those sensations, but by the 18th Century modern scientists such as Benjamin Franklin had begun to capture and control this energy – using Leyden Jars to store static charge within thin tin-foil plates. And they were quick to explore its effects on the body. Franklin, for instance, tried applying a static electric shock to cure the cramps that came with a woman’s hysteria.

Such treatments were not without danger, however – as Waits recently noted in a paper for Progress in Brain Research. In May 1748, the Philosophical Transactions of the Royal Society published a report by a man named Robert Roche, whose 16-year-old son had suffered from periodic fits “that entirely take away his senses”. He took to building his own “electrifying machine”, deliberately shocking his son twice a day in a desperate bid to prevent the seizures.  One time, however, his son’s “frock” caught fire “with a great blaze… the flame rising six inches above the collar.” Fortunately, Roche managed to quell the fire with his own hands, and he happily reported that he had redesigned his machine to prevent future mishaps.

The technology would change dramatically in the 19th Century, with the invention of the first chemical battery – using metals soaked in an acidic solution to generate an electric current. But it was only with the rise of consumerism, during the industrial revolution, that these instruments began to reach the general population.

“With mass production, they could be produced efficiently and cheaply – and mail order catalogues let you sell the products across the whole country,” says Anna Wexler at the Massachusetts Institute of Technology. The result was the rapid rise of countless electro-therapies that aimed to improve circulation and reduce blockages in the major organs. “People used them for pretty much everything,” Wexler adds. “Both consumers and physicians were just trying things, experimenting and seeing if things would stick.” 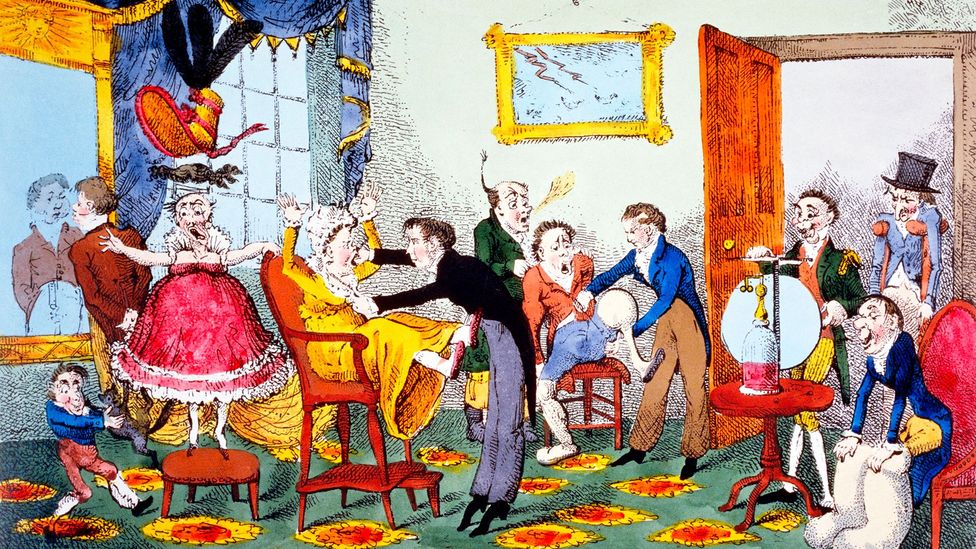 The Hydro-Electric Chain was one of the most successful products. Its inventor, Isaac Pulvermacher, was a Prussian emigre moving between Germany, France and England, whose previous accomplishments had included a new kind of dynamo. Thanks to clever marketing, however, his ‘magic band’ soon turned out to be a far more lucrative business, selling in its thousands across Europe and the USA.

Pulvermacher’s belt even makes an appearance in Gustave Flaubert’s novel, Madame Bovary, where it apparently endows the pharmacist Monsieur Homais with astonishing sex appeal. His wife, we are told, “was quite dazzled by the sight of the golden spiral in which he was almost lost to view, and she felt a redoubling of her passion for this man, bound tighter than a Scythian.”

By varying the number of batteries within the belt, and the location of the electrodes on the body or the scalp, the device could be adapted to treat headache, rheumatism, dyspepsia, heart palpitations, dropsy, and piles, fatigue and general nervous complaints. “The success which has attended them is UNPARALLELLED in the history of medicine,” his promotional pamphlets claimed. “That most were purchased and used by the wealthy and intelligent speaks volumes in their favour!”

The company did not address any side-effects of the device, besides the occasional appearance of sores around the electrodes, although it did warn that the sensation of the electric current could become “unsupportable” at high powers.

And they had success stories aplenty. “You know in what a pitiful state of debility and emaciation I was, unable to digest anything,” wrote one satisfied customer, who had been suffering from a bout of diarrhoea so severe that “it could not be stopped by any medical advice”. Within two days he was eating again; within 10, he was completely cured. “I am perfectly well now, and beg you to accept my best thanks for having restored my life.”

Whether we can trust these reports is another matter: Pulvermacher’s agents were known to misquote doctor’s testimonials. But Wexler points out that many of the other manufacturers were more sober in their claims, and less faddish “medical batteries” (essentially a wooden box with electrodes and dials) were often used by reputable doctors. 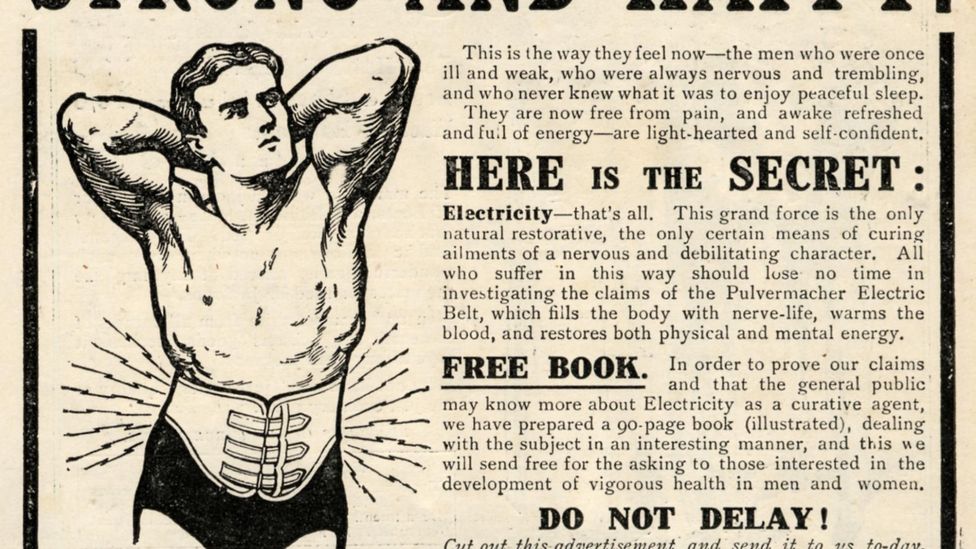 Could an electric shock be the secret to a virile body? (Credit: Alamy)

By the 1920s, however, the treatments began to fall out of fashion, both among doctors and the general public. But many of the inventions still turn up at antiques auctions, and one American collector, Jeff Behary, has spent years restoring and testing them on himself – a collection that is now held by the RGF Environmental Group in Florida.

One of the stranger contraptions used a build-up of static electricity, perhaps a little like the device used by Roche in the 1740s. The “patient” would stand on a wooden platform under a metal crown – and as the voltage in the device built, they would experience the charge drawn through their head. “You feel a rush of energy escaping your body,” says Behary. There’s also the sensation of cool air flowing over your skin.  “It is one of the most relaxing and oddly peculiar sensations one will ever experience.”

Pulvermacher’s Chains were less dramatic, he says – provoking the sensation of a slight shock. In a sense they were more like a fashionable piece of jewellery, he says, and although he thinks it might have relieved some symptoms, he suspects this was due to distraction more than anything else. “It sort of takes your mind off the pain.”

Despite the decline of those devices, the possibility of using electricity to treat diseases has never completely disappeared from mainstream medicine. Electroconvulsive therapy, for instance, used an electric current to trigger a brain seizure, as a means of treating severe depression in the 40s, 50s and 60s. (The therapy is perhaps most famously depicted in the book and film One Flew Over the Cuckoo’s Nest.) The severe side effects – such as substantial memory loss – mean that it is often considered a last resort for the most severe cases.

A gentler electro-therapy, called ‘transcranial direct current stimulation’ or tDCS, involves passing a much smaller current through the scalp, to gently tickle the neurons underneath. The equipment today looks surprisingly similar to the medical batteries of the past, and depending on the placement of the electrodes, neuroscientists think they can selectively activate or deactivate the different brain regions involved in certain kinds of thinking and reasoning.

The technique has already shown some promise in boosting recovery after stroke, soothing chronic pain, and alleviating the symptoms of Parkinson’s disease. Some experiments have also suggested that it can boost concentration, memory, and mathematics skills. Sceptics argue that some of the results may just be a fluke, however, and doctors still need to perform larger clinical trials before these benefits can be proven. 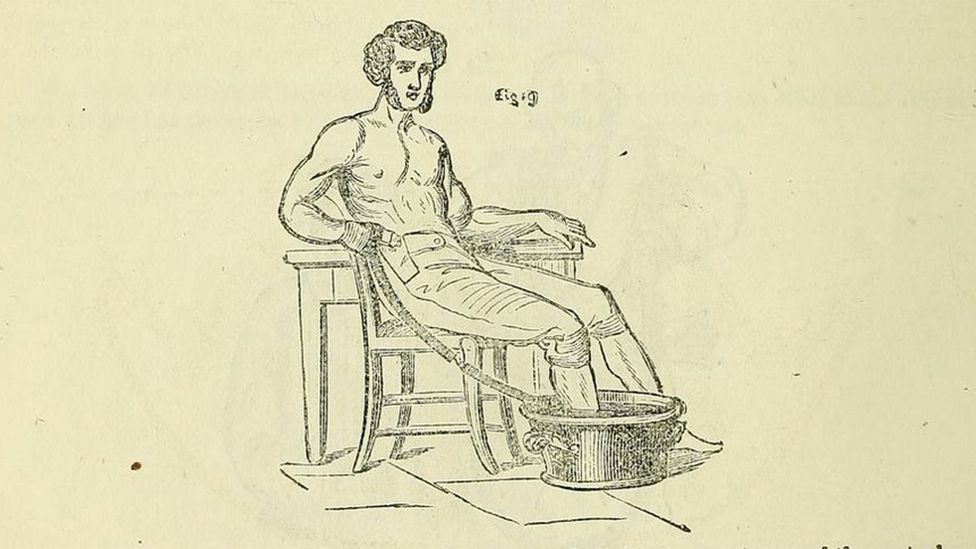 This diagram from Pulvermacher’s manual shows the way that Charles Dickens may have treated his leg pain (Credit: Creative Commons)

But that has not stopped some people from starting to apply tDCS themselves, in their own homes, using off-the-shelf kits and home-made devices.

Wexler has studied this trend in depth, and in a recent paper for Brain Stimulation journal, she draws many parallels with the 19th Century craze for electro-therapies of the past. In both cases, for instance, there is a spirit of self-experimentation – with a community of like-minded enthusiasts sharing tips and tricks – through the pages of magazines, or (today) online reddit forums.

What’s more, many of the tDCS users have turned to the devices out of frustration with other medical treatments – particularly for disorders like depression – and this was similarly true in the 19th Century.  “They were marketed as a substitute for a visit to the physician,” says Wexler. Then, as now, reputable scientists and doctors became increasingly concerned about this unsupervised use of the devices. Neuroscientists today are calling for tDCS to be regulated by organisations such as the Food and Drug Administration.

Wexler thinks we would do well to consider that history as we consider both the promise – and the risks – of those devices. “What we’re seeing now can feel new – it can feel crazy,” she adds. “But if you look to the past it’s not new at all – the home-use of electricity was popular 100 years ago. History does repeat itself.”