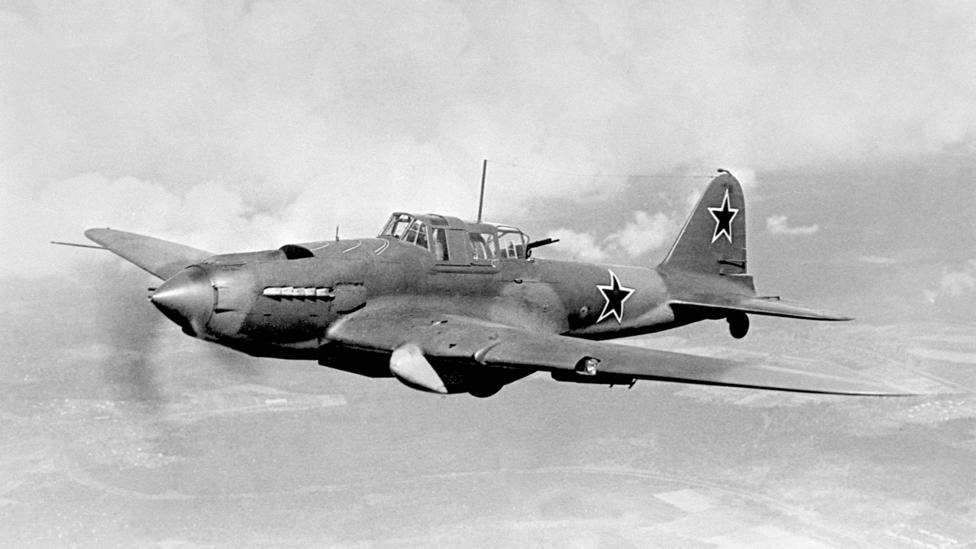 By Richard Hollingham 17th February 2017
The Ilyushin Il-2 Sturmovik was an armoured ground attack aircraft designed to destroy tanks from tree-top height. Now, a rare surviving example of this Soviet aircraft is being restored in Arizona.
W

When Nazi forces reached Leningrad in the summer of 1941, rather than risk the lives of thousands of soldiers battling fierce Soviet resistance, the generals chose instead to blockade the city. It left Leningrad’s three million residents almost completely cut-off from the outside world for 900 days.

During those terrible months, some 800,000 people died of starvation and disease or were killed by German bombs and artillery shells.

Finally, on 27 January 1944, Soviet forces broke through the German lines, opening a corridor to the devastated city. In support of those troops, hundreds of aircraft attacked German ground positions to secure the airspace above the battlefield.

Our Red Army now needs Il-2 aircraft like the air it breathes, like the bread it eats – Josef Stalin

The next day, as the Germans were being driven back further, one of those planes – an Ilyushin Il-2 Sturmovik (Attacker) ground-attack aircraft – ditched in a lake south of the city. The crew survived but the aircraft was lost – one of dozens destroyed in the battle.

Seventy years later, that plane has surfaced on the other side of the world.

“This was recovered from the lake in the early 1990s,” says James Stemm, the director of aircraft restoration at the Pima Air and Space Museum in Tucson, Arizona. “It was bought by a US gentleman but he passed away, so his family donated it to us.”

Known as the “flying tank”, in total some 36,000 single-engine Sturmoviks were built – the greatest number of any military aircraft in history – and this is one of only a dozen survivors. It is surprising there aren’t more, it was one of the Soviet Union’s most important aircraft of World War 2. So important, in fact, that in an angry letter to armament factories in 1941 Stalin emphasised how vital the Il-2 was to the war effort: “Our Red Army now needs Il-2 aircraft like the air it breathes, like the bread it eats,” he wrote. 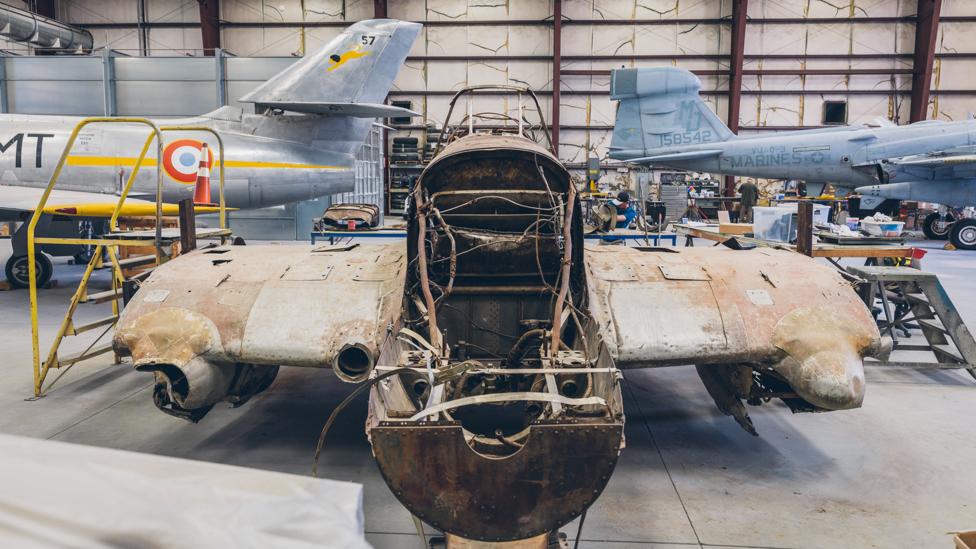 The restored Il-2 was shot down while helping break the siege of Leningrad in 1944 (Credit: Chris Hinkle)

Although the Sturmovik at Pima has spent half a century rotting at the bottom of a lake, the bulk of this rare aircraft is remarkably preserved. That is thanks, in no small part, to its unusual structure.

“Its design is unique,” says Stemm, as we examine the bath-like rusted central section of the aircraft, propped up on a stand in the museum’s restoration hangar. “The part around the cockpit and engine is thick steel plate rather than aluminium –  it’s more like a boiler than an airplane.”

The chances of getting hurt doing this particular job was very high – John Stemm, Pima Air and Space Museum

This armour offered protection to the pilot during the aircraft’s low and slow attack runs at the front line of the battlefield. The Sturmovik would have flown barely 20 metres (70 ft) off the ground – firing its machine guns and cannons or dropping bombs and rockets.

“The chances of getting hurt doing this particular job was very high,” says Stemm. “Virtually everyone could shoot at you – from an infantry man with a rifle to anti-aircraft guns, all the way up to heavy guns.” 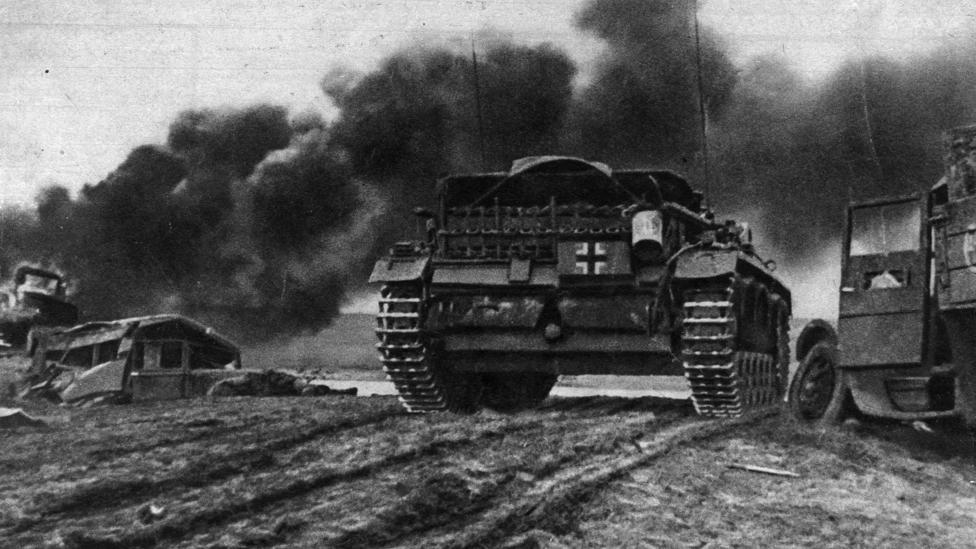 The Sturmovik was instrumental in pushing back German forces on the Eastern Front (Credit: Getty Images)

Although the bulk of the front and central sections of the fuselage are armoured, protecting the 12-cylinder engine and pilot, the tail section and wings were both made of wood. “This was done to save strategic materials and reduce the weight of the aircraft so it could carry more weapons,” says Stemm.

The first Sturmoviks came off the production line in 1939 and, at 11 metres long, were designed for a single male or female pilot (women combat pilots were not unusual). When they were flown in battle in the early months of the war, however, it was soon discovered that they were vulnerable to fighter attack from the rear.

“So they did a field modification,” says Tim Robinson, editor-in-chief of Aerospace Magazine from the Royal Aeronautical Society in London. “They cut a hole in the rear fuselage, put a fabric seat in there for a rear gunner – who was often the mechanic – and he or she fired out of the back to protect it.” 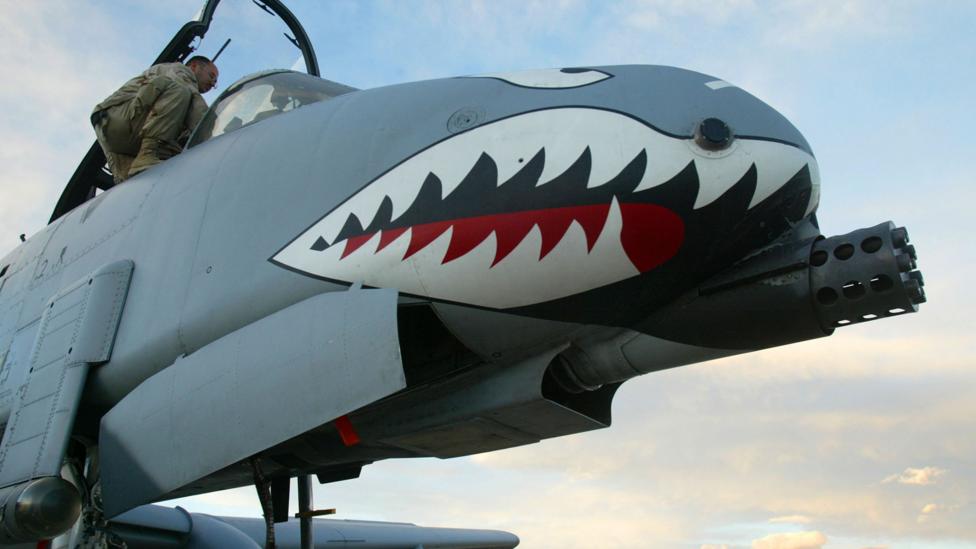 The US A-10 also uses a similar 'armoured bathtub' design (Credit: Getty Images)

Being appointed a rear gunner on a Sturmovik, with only thin wood to protect you from shells, bullets and shrapnel, was not a popular assignment. Nor often a lengthy one. There are reports that, given the high rate of attrition, many gunners were recruited from the gulags.

“The Soviet mindset was to get the aircraft into action,” says Robinson. “The aircrews had minimal training and lives were thrown into the battle. Although the gunners were vulnerable, it was considered a price worth paying.”

“They suffered heavy losses,” says Stemm. “Around 12,000 were shot down by the Germans.” That is one of the reasons so few of these aircraft survive today.

Nevertheless, Stalin was right; the aircraft more than proved its worth. Flying in formation, squadrons of Sturmoviks supported ground assaults – destroying even the most heavily protected tanks, trucks and armoured vehicles. The planes were also used to bomb airfields and attack ships.

One tactic military strategists developed for the aircraft was the “circle of death” where a group of Sturmoviks would encircle a target at a safe altitude. On a command, each plane in succession would peel away and dive towards the ground to attack, before returning to the circle. The procedure continued until the target was destroyed or ammunition exhausted. 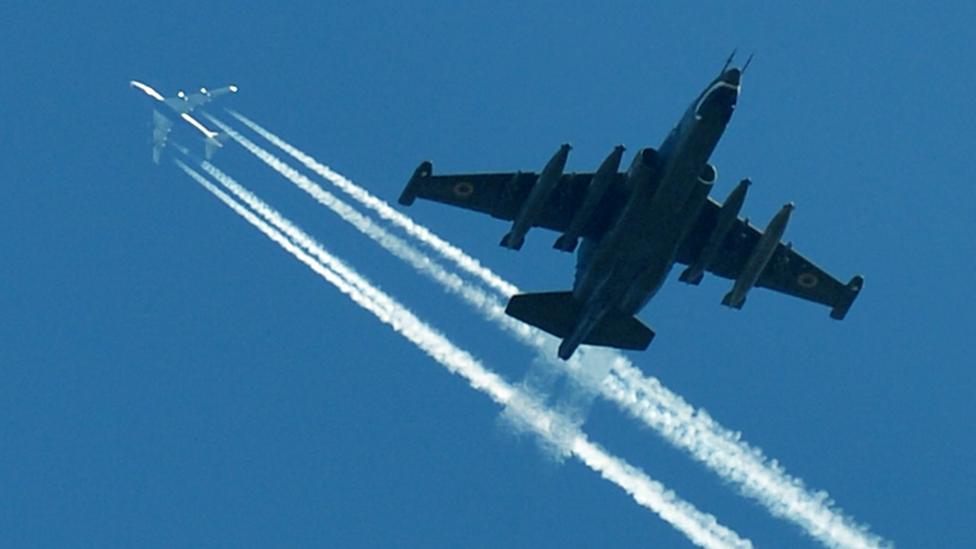 The Soviet-era Sukhoi Su-25 jet was an updated Sturmovik - and still serves in many air forces (Credit: Getty Images)

“This is one of the aircraft that helped win the war,” says Stemm. But when the war was over, most of the planes were scrapped – superseded by the development of combat jets. The last Sturmovik flew in combat during the Korean war in 1950. There is only one still flying today but that lacks the original engine. (Curiously, it was also recovered from a lake and ended up in the US – you can see it here.

The basic design, however, lives on. “It proved to be so effective, it was adopted by the Americans,” says Stemm.

“A heavily armoured ground attack aircraft carried on with the American A10 Thunderbolt, which is still flying today,” he says. “It’s really the same idea, the A10 is the Sturmovik’s descendent.” The Russians also have a similar jet – the Su-25 – which can perhaps claim an even more direct lineage with the Sturmovik.

At the Pima Air and Space Museum, the original Sturmovik – last seen in one piece ditching into a lake near Leningrad in 1944 – is coming back together. Although parts of the aircraft are suitable for flight, it is currently being restored for display only. The restored Il-2 will be one of only a handful from the 36,000 built (Credit: Chris Hinkle)

A new wooden tail section and wings have been completed, the propeller straightened and an original engine restored. The museum is even building an exact copy of the machine gun and swivel mount for the rear gunner position. It is hoped to put the completed aircraft on display in the summer.

When listing the planes that helped to win World War 2, Soviet aircraft are often neglected. The Sturmovik deserves as much recognition as the Spitfire, Lancaster or B-17 Flying Fortress in defeating the Nazis. “From an historic standpoint and because there are so few surviving,” says Stemm, “it’s a very important aircraft to preserve.”

HyperDrive
1The tankers of the sky
future
2The jet that flew higher than any plane
HyperDrive
3A plane 10 times faster than Concorde?
Space Station
4The plane that helped us to the Moon
Around the BBC