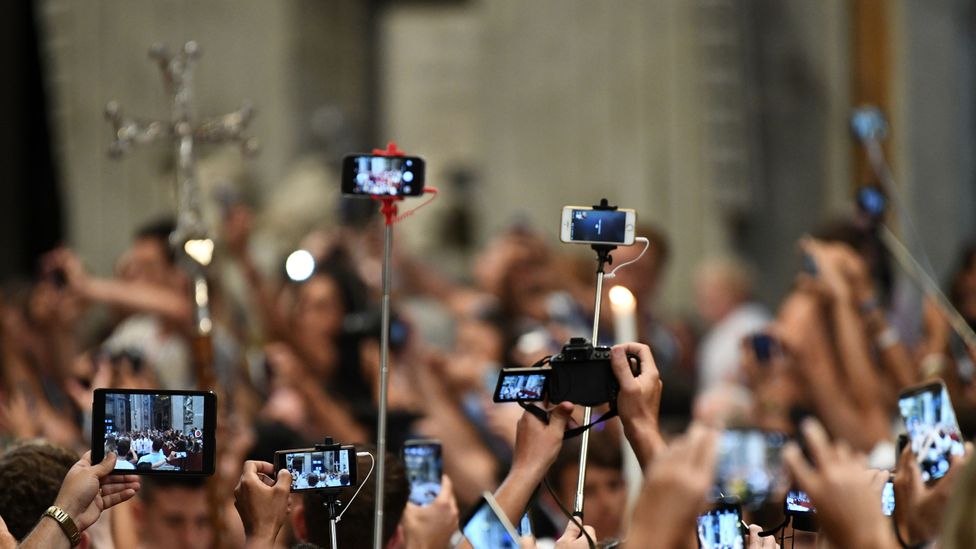 By Chris Stokel-Walker 23rd February 2017
Many Christians are turning to apps and memes to express their faith instead of churches – and it's raising intriguing questions about the future of the world's largest religion.
W

When the Reverend Pete Phillips first arrived in Durham nine years ago, he was ejected from the city’s cathedral. He had been reading the Bible on his mobile phone in the pews. Phones were not allowed in the holy place, and the individual who accosted him would not believe that he was using his phone for worship and asked him to leave. “I was a bit miffed about that,” says Phillips, who is director of the Codec Research Centre for Digital Theology at Durham University in the UK. “But that was 2008.”

Next year Durham Cathedral will have been standing for 1,000 years. But its phone policy is now up to date. “They allow people to take photos, to use phones for devotional reasons – whatever they want to do,” says Phillips. “The attitude has changed because to restrict people from mobile phone use now is to ask them to cut their arm off.”

This more relaxed approach to phones is not the only tech-related update the Church has undergone in the past few years. The rise of apps and social media is changing the way many of the world’s two billion Christians worship – and even what it means to be religious. 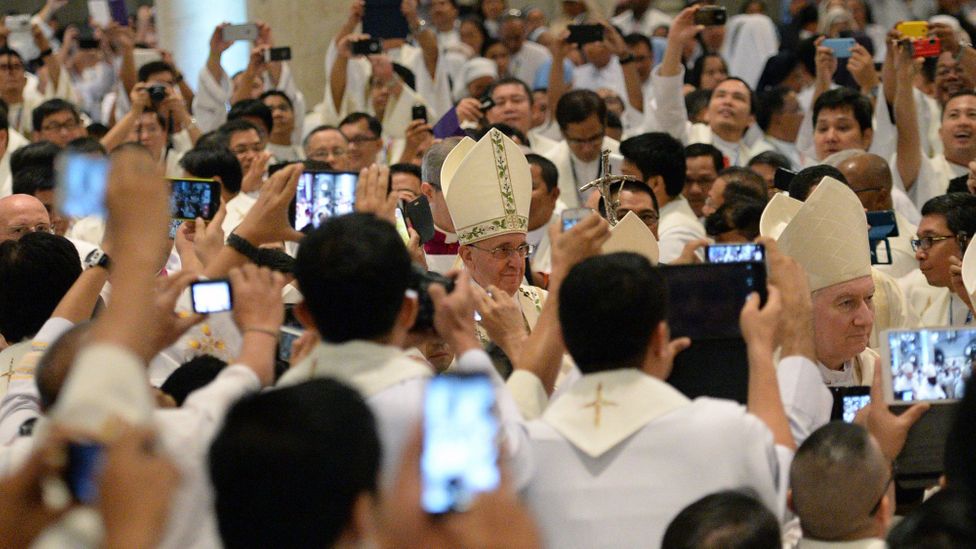 Most churches now have a more relaxed attitude towards the use of phones than they did just a few years ago (Credit: Getty Images)

The Reverend Liam Beadle became Yorkshire’s youngest vicar when he took up his role at St Mary’s Anglican Church in Honley, a village of 6,000 people five miles south of Huddersfield. He runs his parish’s Twitter account. A colleague runs the church community’s Facebook profile. The Bishop of Leeds, the Right Reverend Nick Baines – who is the head of Beadle’s diocese – was one of the first bishops to start a blog and is known in the church as the “blogging bishop”.

But Beadle contrasts the Church’s approach to social media with its reaction to the printing press. “The difference between then and now is that with the invention of the printing press we were proactive,” he says. “With the advent of social media, I think we are being reactive, we’re jumping on the bandwagon.”

The mobile phone Bible is now replacing the book Bible

The ubiquity of smartphones and social media makes them hard to avoid, however. And they are changing the way people practise their religion. Faiths are adopting online technologies to make it easier for people to communicate ideas and worship, says Phillips. “But that technology has shaped religious people themselves and changed their behaviour.”

Many people scrolling through their phones in Christian churches are probably looking at a Bible app called YouVersion, which has been installed more than 260 million times worldwide since its launch in 2008. Similarly popular apps exist for the Torah and Koran.

“One of the first things Christians did with the computer was to put the Bible into digital formats,” says Phillips. Those digitised Bibles then made their way onto phones. “To some extent, the mobile phone Bible is now replacing the book Bible.”

According to the company behind YouVersion, people have spent more than 235 billion minutes using the app and have highlighted 636 million Bible verses. But reading the Bible in this way could be changing people’s overall sense of it. “If you go to the Bible as a paper book, it’s quite large and complicated and you’ve got to thumb through it,” says Phillips.

“But you know that Revelations is the last book and Genesis is the first and Psalms is in between. With a digital version you don’t get any of that, you don’t get the boundaries. You don’t flick through: you just go to where you’ve asked it to go to, and you’ve no sense of what came before or after.” 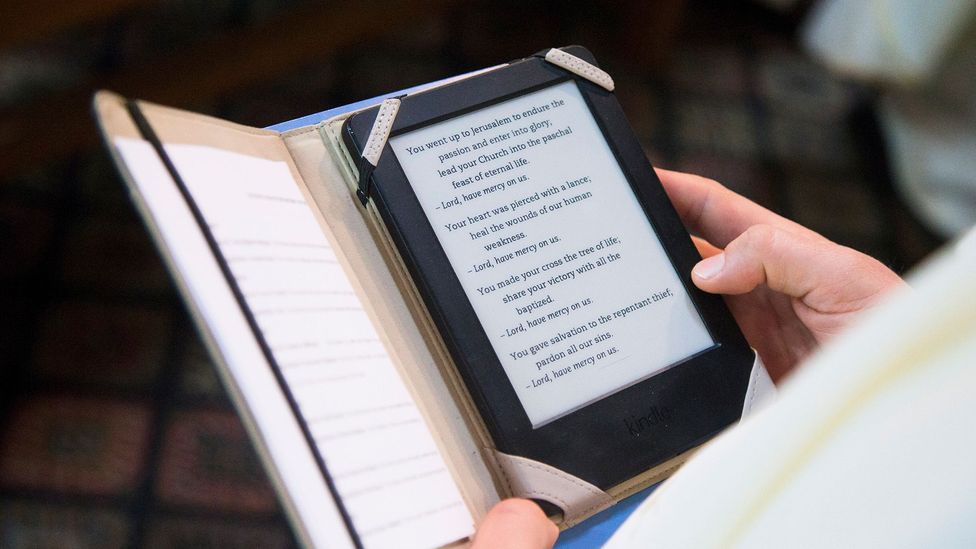 One of the first things Christians did with the computer was to put the Bible into digital formats (Credit: Getty Images)

Quite how interacting with the Bible in bite-sized nuggets might affect people’s views of it is now being explored by researchers like Phillips. The way religious scriptures are read can influence how they are interpreted. For example, studies suggest that text read on screens is generally taken more literally than text read in books. Aesthetic features of a text, such as its broader themes and emotional content, are also more likely to be drawn out when it is read as a book.

In a religious text, that distinction can be crucial. “When you’re on a screen, you tend to miss out all the feeling stuff and go straight for the information,” says Phillips. “It’s a flat kind of reading, which the Bible wasn’t written for. You end up reading the text as though it was Wikipedia, rather than it being a sacred text in itself.”

Some think that overly literal interpretations of religious texts can lead to fundamentalism. If you take Genesis as an account of six days of creation, for example, you will need to believe that science is wrong, says Phillips.

Yet at the same time, a separate strand of Christian practice is booming, buoyed by the spread of social media and the decentralisation of religious activity. For many, it’s no longer necessary to set foot in a church. In the US, one in five people who identify as Catholics and one in four Protestants seldom or never attend organised services, according to a survey conducted by the Pew Research Centre.

Apps and social media accounts tweeting out Bible verses allow a private expression of faith that takes place between a person and their phone screen. And the ability to pick and choose means they can avoid doctrine that does not appeal. A lot of people who consider themselves to be active Christians may not strictly even believe in God or Jesus or the acts described in the Bible. 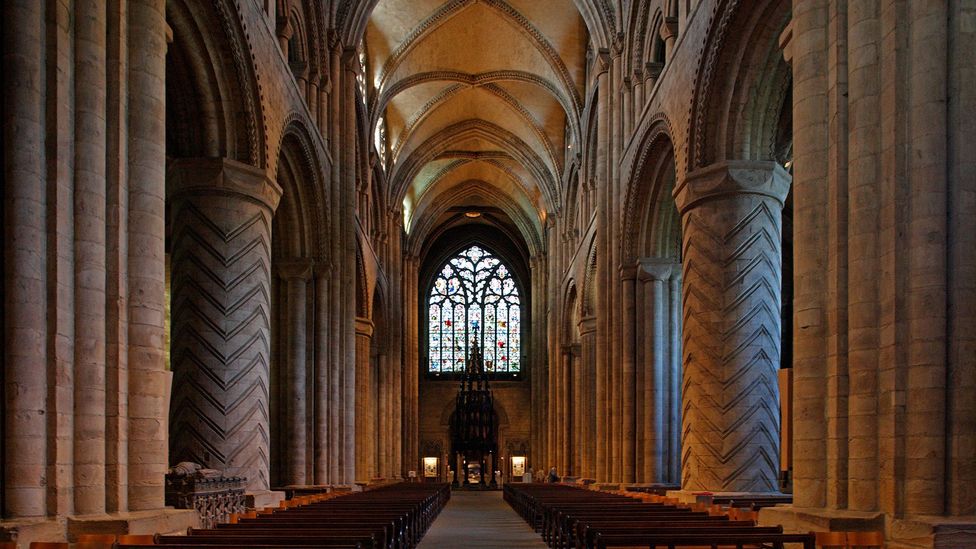 Durham Cathedral has seen a lot of change in its 1,000 years – smartphones and social media are just the latest (Credit: Getty Images)

“A new kind of mutated Christianity for a digital age is appearing,” says Phillips. “One that follows many of the ethics of the secular world.” Known as moralistic therapeutic deism, this form of belief is focused more on the charitable and moral side of the Bible – the underlying tenets of religion, rather than the notion that the Universe was created by an all-seeing, all-powerful leader.

This new form of religion was first described by sociologists in 2005, but it has been supercharged by the internet and social media. “People are looking for a more personalised religious experience,” says Heidi Campbell at Texas A&M University, who studies religion and digital culture.

People are looking for a more personalised religious experience

“Millennials prefer this generalised picture of God rather than an interventionist God, and they prefer God to Jesus, because he’s non-specific,” says Phillips. “He stands behind them and allows them to get on with their own lives rather than Jesus, who comes in and interferes with everything.”

Sharing Bible verses on social media lets worshippers find their own readings rather than sitting through ones chosen by a priest every Sunday. Bible verses are also subject to popularity contests, where their acceptability to a wide audience can dictate their spread.

The most popular Bible verses bookmarked, highlighted and shared on social media via YouVersion’s app are frequently those which reflect the secular and inclusive ideals of moralistic therapeutic deism. Many concern things like personal struggles or dealing with anxiety, for example –  rather than promoting the glory of God.

Pick-and-mix religious beliefs are not new. But it is easier than ever to fashion an individualised faith. “The internet and social media help people to do it in more concrete ways,” says Campbell. “We have more access to more information, more viewpoints, and we can create a spiritual rhythm and path that’s more personalised.” 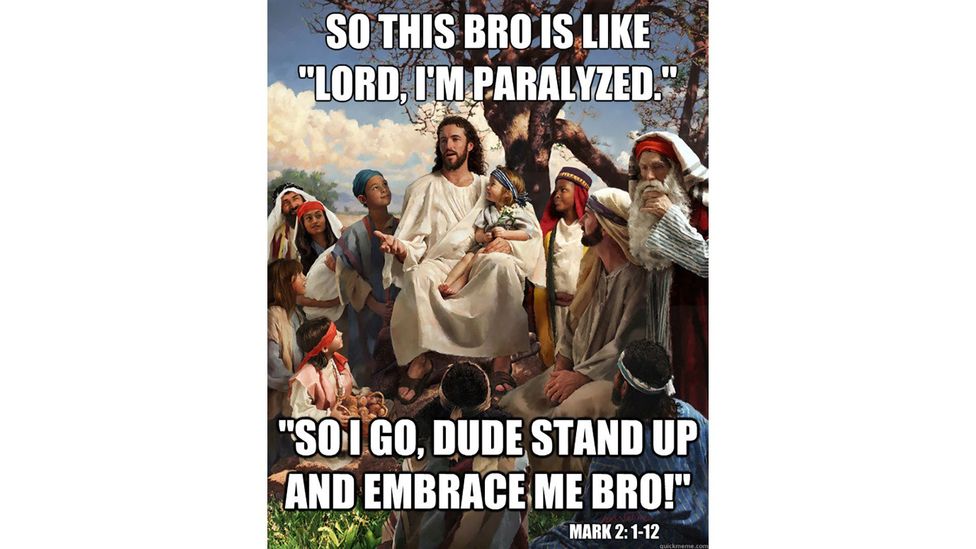 And that includes bringing sacred figures into memes. Story Time Jesus – where classical religious iconography is overlaid with bold text that describes religious verses in colloquial language – became a viral meme in 2012 and has remained popular since. Others include Bunny Christ and Republican Jesus.

Many of these memes may have started as jokes, but they are being used to spread religious ideas too. “People are using memes as a way to provoke debate about religion and affirm beliefs,” says Campbell. “You can’t meme a theological truth in depth but you can summarise the essence to draw people’s attention, using them as teasers.” That applies to tweeting too. There are churches around the world that encourage their congregations to live-tweet sermons.

It’s a source of friction, however. A few years ago a UK cathedral started live-tweeting its services. “There were questions about how appropriate it was,” says Beadle. “I think the jury’s still out on that one. There probably is a case to be made that if you’re on Twitter you’re not engaging as fully as when you’re not on Twitter.”

The jury is still out on live-tweeting services

On top of that, there are concerns that a series of short tweets is not an appropriate way to represent complex and subtle concepts. “When you’re talking in 140 characters or a seven-second video, you’ve got to condense things,” says Campbell. “The tendency is to stereotype or simplify messages. It’s not just about using the tools but treating the tools with the respect they need.”

Which is perhaps why Durham Cathedral was so circumspect about Phillips and his phone back in 2008. Even so, religion of all hues – not just Christianity – is becoming less about the preacher in the pulpit, she says. “Digital is all about two-way communication. People come with a certain expectation of what a community looks like and what freedom they’ll have, and religious institutions need to either adapt to that or be an exception.”

If nothing else, organised faith is good at adapting – Christianity has been reinventing itself for nearly 2,000 years. Smartphones and social media are just the latest developments to force a change.

If you liked this story, sign up for the weekly bbc.com features newsletter, called “If You Only Read 6 Things This Week”. A handpicked selection of stories from BBC Future, Earth, Culture, Capital and Travel delivered to your inbox every Friday.

Future Now
1Sex workers who sell their real lives
Future Now
2The new words for how we use our phones
Future Now
3How the generation gap became a chasm
Last Place on Earth
4Will religion ever disappear?
Around the BBC